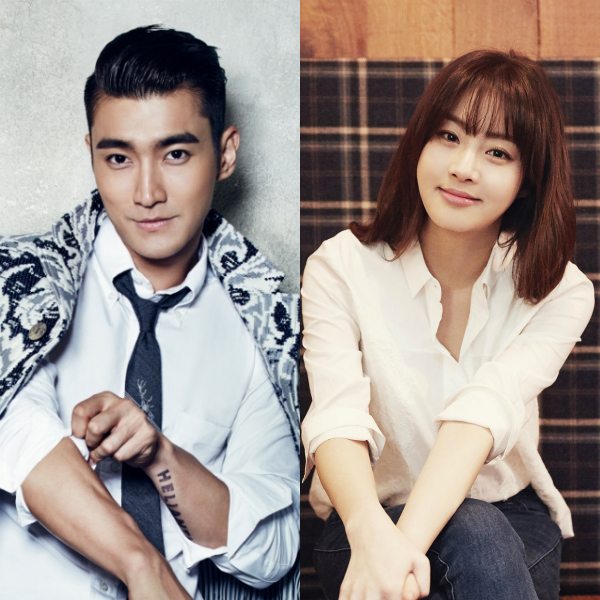 Yaasss, bring on the fall rom-coms! Kang So-ra (Neighborhood Lawyer Jo Deul-ho) and Choi Siwon (She Was Pretty) have officially signed onto Revolutionary Love, the new drama directed by PD Song Hyun-wook of Oh Hae-young Again and written by Joo Hyun of Ms. Temper and Nam Jung-ki. And soon after, tvN announced that the series will premiere this fall.

Revolutionary Love has a pretty standard setup: A third-generation chaebol with no survival skills meets a hard-working Candy who doesn’t have the background to secure full-time employment. Of course there’s a love triangle, completed by another character who dreams of becoming a “gold spoon.” Siwon is set to play the carefree rich boy who pretends to be an unemployed bum for some reason. Having been pampered all his life, he’s naive and a little narcissistic, but he’s the type of person you can’t help but love for his sunny personality.

On the other hand, Kang So-ra plays a full-time part-timer who graduated from a no-name school and comes from a common background. No matter how much she tries, she’s been unable to become hired as a full-time employee, but she’s kept her positive attitude. She’s a straightforward person who can’t stand to see injustice happening before her eyes. Her journey into love begins when Siwon moves into her neighborhood, in his shabby poor man disguise.

This drama will be Siwon’s first project since being discharged from the army. Has it really already been two years since She Was Pretty? Wow, time flies fast, but I remember him as being the highlight of that drama, which made me shed even more fangirl tears when he left to fulfill his military service. So I’m excited to see him back in dramaland, especially with Kang So-ra, who has that quirky awkward-cute vibe that I think would mesh well with Choi Siwon’s acting style.

Saturday-Sunday rom-com Revolutionary Love will begin in October, after the end of Live Up to Your Name on tvN.

Wow it's been 2 years???
From all these Rom coms I'm really starting to believe Koreans have an extremely strong sense of justice - well except in the world of law (those prosecutors to be exact )

Ikr ! While in Lee seunggi's case it seems like 5 years xD

Siwon is back pretending to be a bum. How very him. let´s have fun! all riiiiight!

He does sound perfect for the role doesn't he? ? I'm getting excited, I could really do with a good rom-com ?

But... but Louie had memory loss!

You can't say that about my Louie... *sobs in the corner

U can't say that about Louie.. He is different, he is special, He has survival kit, his puppies eyes

Assa they both confirmed ? ! Thanks for the news :)
So Siwon's character will be "the type of person you can’t help but love for his (*cough* dimples *cough*) sunny personality. " ?

It'll be Siwon return to dramaland + my first drama seeing Kang So Ra since Misaeng , then you add Oh Hae Young Again ❤ PD and Ms. Temper and Nam Jung-ki writer (haven't watched it but I've seen good reviews about it, so I guess writer is also good news)
One thing for sure, I've booked one of my dramas for this fall ㅋㅋㅋ

The scenario sounds dull and do I care? Nope! I fully expect to really like a show starring these two.

I'm going to pretend that jackson is going to find his true love finally...

So we have on October in tVn :
Mon-Tue Prison Life with Jung Kyoung Ho
Wed-Thu Revenge drama with Ra Mi ran and the other great actresses
Sat-Sun Revolutionary Love with SiWon.

Jung kyung ho is back??!! I must have missed that! Super excited now! Jung kyung ho, Jung ryeo won and now siwon and kang Sora! The drama Gods are smiling on all of us!

Why are all the "Candys" all the same? Can't get ahead in life, but always positive, can't stand injustice, etc., etc., etc. I would love to see one that just says "screw everyone, I'm going to do whatever it takes no matter what..." ?

true, true... thing is, they always show people who have become poor because of a parents´ debt, or ruined business or just a low social background, but not people who are poor because they don´t have any ambition.

But no one would cheer for this type of character .
To make it fair, it's not like I can feel for too poor characters, I am from middle class family, as majority of people around the world, I have never had 2+ part time jobs and never got debts from my family.
Plus, I have watched too many dramas to get immune to optimistic, justice loving poor characters.

So true...
look at Manhole and the rating although the main lead character not exactly has same description

I think Manhole is pretty good as a concept it is directing and editing where it could use a little push plus they sometimes overdo it with all the visuals and sets.

These roles will be so easy for those two, they're basically tailor made for them. I will definitely be watching!

I love Kang Sora. I love Siwon. I'm so ready for these two to bring on the chemistry!! Look how good they look together already!

You know what be really revolutionary... A third gen Chaebol heiress and the down on his luck hardworking positives man who reforms her.

//Chaebol heiress and the down on his luck hardworking positives man//

Actually it's sound a little bit like "History of the Salaryman" synopsis. Kinda.

It kinda reminds me of most k-romance dramas lol

This is the exact plot for Ugly Alert. Coincidentally it's another Kang Sora drama

Yes!!! Choi Siwon is back!!! I am also glad that it sounds like a simple kind of rom com without all the time travelling and legal stuff. I know it sounds very cliche but been looking forward to a simple rom com. I am soooo over time travelling dramas.

Yay, news about Jung Ryeo-won before and now Kang So-ra. News feed this week made me do my happy dance all the time.
?

Finally a casting news I'm excited about!! Love these two and can't wait to see them together! And, as mundane as the plot sounds I'm weirdly anticipating it. *plz be a good rom-com* *bring on the crazy!*

Dreams do come true!!! Yassss!! Choi Siwon is back (Jacksonnnn is back to find his true love hehe)! Kang Sora is finally back as a lead! Life is good.

Simple, done-before premise indeed. I hope there will be more to it and that the delivery will be good. Is this finally going to be the romcom I have been waiting for this year? /fingers crossed

I have to say, I don't mind seeing him being funny for a third time.

Aside of being unemployed, Siwon's character description sounds like Choi Siwon.

Siwon is back!!! I haven't seen Kang Sora's latest dramas so I'm looking forward to seeing her too! ahh, I'm so excited for this.

Excited to see Siwon back but meh, nothing about the premise excites me. It's like every single drama out there so far.

I love the pairing and am happy for Siwon's lead role in years. Hope the drama is good.

So....is this She Was Pretty (Jackson version) meets Warm and Cozy? Because it really sounds like one. But I have a strange feeling that this pair would work nicely, although I dont really fancy Siwon's over the top acting (but I love it when he toned it down a notch). Both Kang Sora and Choi Siwon are quirky, funny and pleasant. It definitely has potential to be an incredibly enjoyable rom-com. Writer nim, please make it good!

Haha Jackson is back and this time has a gorgeous leading lady to boot!

Siwon is a decent actor and to team up with Kang Sora, we got pretty good OTP but the storyline is abit.... Let's hope the directing and writing can get better or some interesting twists in it...

Nothing revolutionary about that plot, but the team behind it and the leads more than make up for it!

The description sounds extremely cliche and like every rom-com ever. But I will still watch it :3

Can this plot get any older ^^;;; but seeing that it's tvN, I'm hopeful. Their dramas are more often refreshing than conventional.

I really like Kang Sora but I like Sora in characters were shes got the brains is a 'hardworking woman' a la Misaeng and not a la Candy... *sigh* Siwon's character sounds great forhim cuz hes got that naive/clueless and warm vibe but I do wanna know how a story about a chaebol and a Candy is revolutionary so I guess ill have to watch the drama to figure it out.

I am getting ideas again. How to make things more interesting: if both characters had a restircting disability. The girl should have a bionic leg cause she was born with just one. The guy would be bad at hearing and scared of going to board meetings because he always ends up being ridiculed, so he pretends to be indifferent not deaf. now imagine them somehow cohabitating. "Bring me my leg!" - "What?" - "My leg! LEG!" - "Say what?" Then she would beat him with it. something in an almost black comedy style not ridiculing disabilities but also not glorifying.

Aaaaa it's two of my faves! And we'd get Oh Hae Young PD, too? Double yasss. The premise isn't all that appealing, but the classic trope is pretty much a safe bet. Can't wait!

i loved Siwon in She Was Pretty and suffered 2nd lead syndrome coz he was such a charming character.
I am glad he gets to rehash a bit of that rich chaebol pretending to be an ordinary guy role
I love Kang Sora too she just gives justice to her roles so yeah looking forward to this!

The plot seems overdone, but I have to admit, they look good together. And that's quite telling, they're not even in the same photo lol. If these two will have sizzling chemistry (something that I've been looking for since FMW and SP ended), then i'm sold!