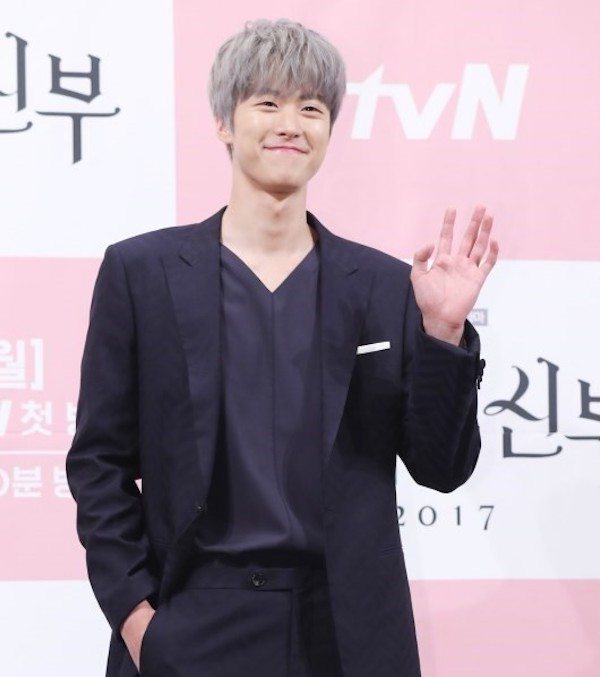 Gong Myung from Bride of the Water God 2017 has just accepted a role in the upcoming tvN drama Revolutionary Love. He was also recently considering Yoo Ji-tae’s white-collar crime drama Mad Dog, but it looks like Gong Myung will be staying in rom-com territory for now. Revolutionary Love’s main couple will be played by Siwon (She Was Pretty) and Kang So-ra (Neighborhood Lawyer Jo Deul-ho), whose characters are typical K-drama lead archetypes—rich boy and poor girl. They cross paths when Siwon disguises his identity as an unemployed, carefree slacker.

Gong Myung will be the head of the secretarial team that supports the business management division of Siwon’s family company. He has known Siwon’s character since childhood, having gone through elementary and middle school with him. He’ll have elite language skills and professional qualifications, in addition to sharp intelligence and a hardworking attitude that make him stand out.

His father diligently served Siwon’s father, the CEO of the company they both work at, as a driver for many years, which allowed him to live a privileged childhood. But he’s struggled from an inferiority complex from it as well, because it seems like no matter what he does he’ll only be in Siwon’s shadow. In the drama, he’ll finally compete with Siwon as a rival for Kang So-ra’s love.

Gong Myung has been busy racking up experience, and he’s an actor to watch out for. Admittedly, I didn’t really enjoy his performance in his last fantasy manhwa adaptation Bride of the Water God 2017, but I’ve heard great things about his previous works like Drinking Solo. And with him averaging almost two dramas and a half a year, I’m sure we’ll see more of him in the future.

Revolutionary Love will follow Live Up to Your Name on the weekends starting in October.

This sounds like a good match for his skills, plus he'll get to work with some great sunbaes who will be able to teach by example.

See, I loved Gong Myung from the first time I saw him in Entertainer, but I thoroughly hated him in BotWg. His character was so awful that I couldn't focus on his acting. He's a pretty decent actor and I think him with Siwon and Kang Sora probably won't make him look absolutely awkward on screen. I still don't feel his screen presence, and I wonder how he'll measure up against Siwon in the charisma department. Anyway, I look forward to this.

I think it's hard for anyone to measure up again Siwon. He has this ability to steal the spotlight even though when he's not the lead (ex. She Was Pretty, Dramaworld)

I love him, though I wish he would diversify his portfolio and not just stick to second lead puppy Rom com roles. He's a talented actor and definitely one to keep an eye on.

This would be way more fun if he was Siwon's secretary who is jealous OF Kang Sora.

This is better decision than accepting Mad Dog for him. I think he is quite decent and not really awkward, but it is reallyyyy depends on role. Actually he should do long drama for now so he can learn more from sunbaes.

I think this is a good role for him to gain more experience before venturing into another genre.

He is a decent and likable actor so will be looking out for this one as he progresses...

Mediocre in Drinking Solo, and awful in Bride of the Water God. Hopefully this role is minor. He's a fine example of how the drama industry in Korea heavily prioritises looks over actual talent.

Wait does that mean Gong Myung is Jeok-in as in "-ary" of revolutionary (Byun-hyuk)? He sounds like the character who completes Byun-hyuk and the copper spoon among Siwon the gold spoon and So-ra the dirt spoon.