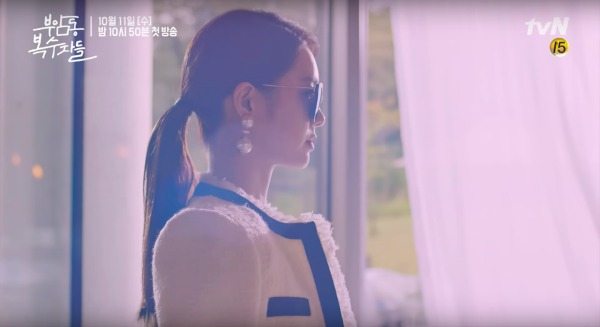 Kudos to the casting director, ‘cause this is some of the most spot-on casting I’ve ever seen. tvN’s Buam-dong Revenge Social Club has released short character teasers for each of our three revenge-seeking ajummas, played by Lee Yo-won (Night Light), Ra Mi-ran (Laurel Tree Tailors), and Myung Se-bin (Kill Me, Heal Me). In addition to giving us our first look at the trio, they also give hints as to why the ajummas seek revenge in the first place.

First, there’s chaebol heiress Kim Jung-hye (Lee Yo-won) who has given her all to her family, even though her marriage was an arranged one. She stands in the middle of an empty cafe, elegantly attired, and says, “You shouldn’t have messed with my last bit of pride.” There’s a fast sequence of her, her ring and a man’s face (her husband?), and then the camera pans out to reveal that she’s staring at a man across the cafe. The teaser ends with her extending the offer, “Would you like to get revenge together?” Ah, so I guess she is the one who forms the revenge club.

The first we see of Ra Mi-ran’s character Hong Do-hee, she’s on her knees in front of a woman, her eyes pleading and tear-filled as money gets thrown at her. Her thoughts, however, betray a less pliant, fiercely protective side: “You shouldn’t have messed with my child.” Eugh, it’s hard to see her having to kneel even in this 15-second teaser, especially knowing that she’s a single mother fish store owner whose children are everything to her. I did a mini fist pump when she got a steely look and agreed to join the revenge club.

The last leg of this ajumma trio is housewife Lee Mi-sook, portrayed by Myung Se-bin. She’s the wife of a university professor and, like her fellow revenge-seekers, has made sacrifices for the good of her family. At least, until now: “I know now, that holding it all in isn’t the answer.” Surrounded by bouquets of flowers that I assume she arranged, she also makes the decision to get revenge.

I am beyond excited to see these three women in action. Their characters are all from such different walks of life that I’m curious to see how they first came to form this club in the first place. And it’s going to be so satisfying to see them dole out retribution to the people who have wronged them, be it husbands, snooty mothers, bullies, or anyone else. I almost feel sorry them. Almost.

Buam-dong Revenge Social Club will air on Wednesdays and Thursdays on tvN, premiering on October 11. 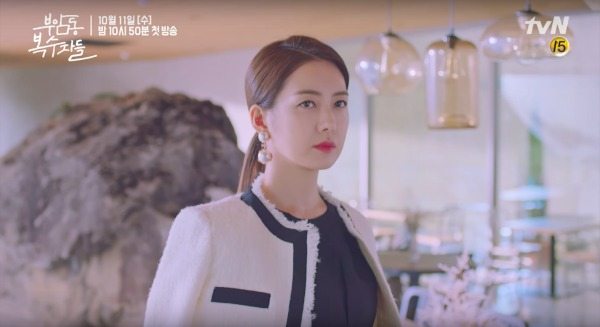 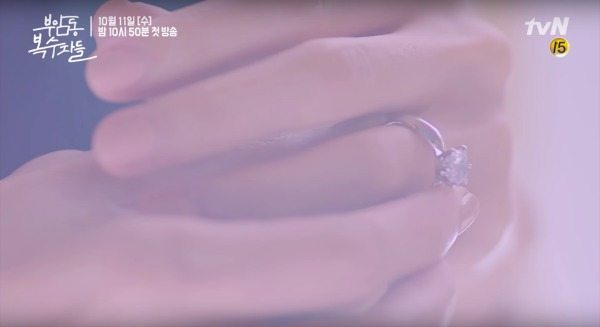 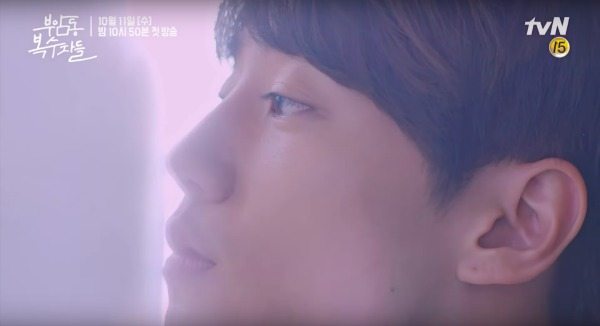 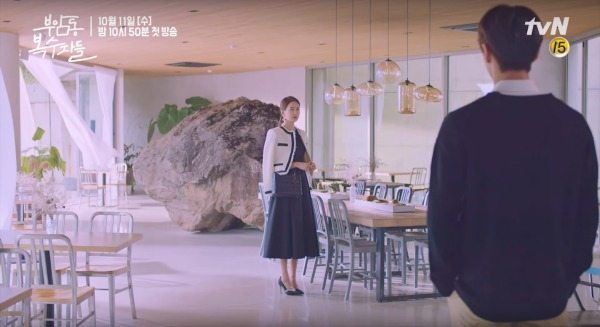 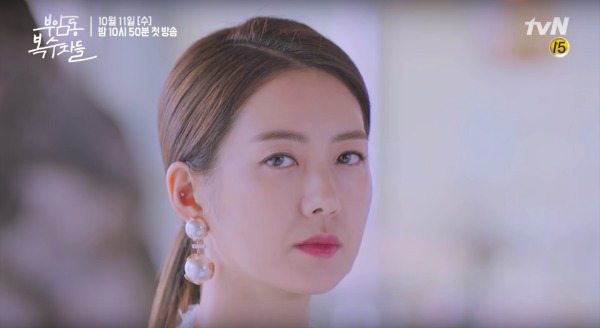 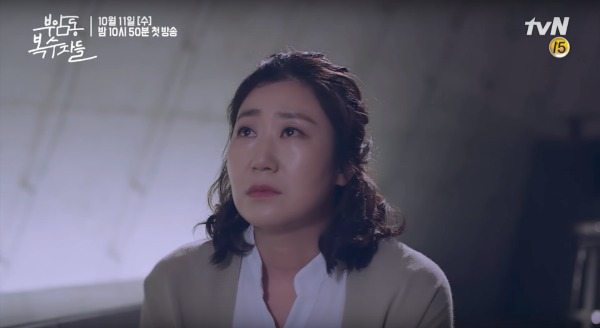 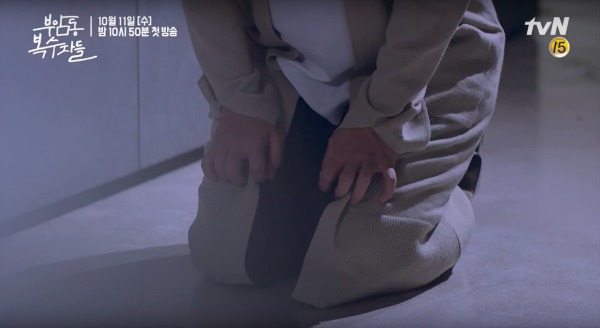 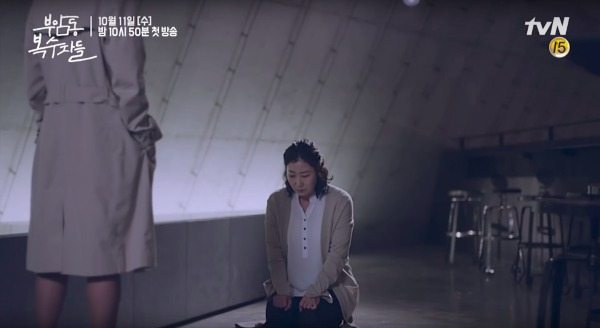 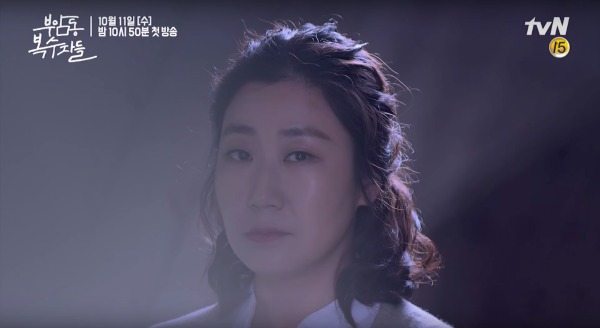 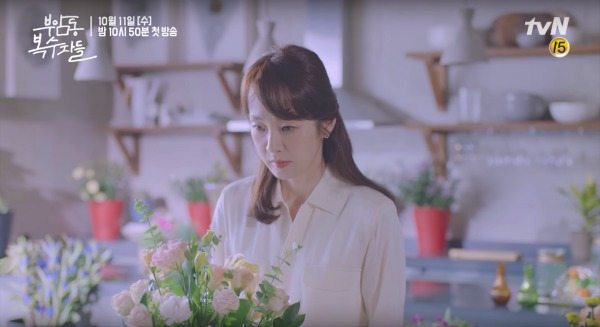 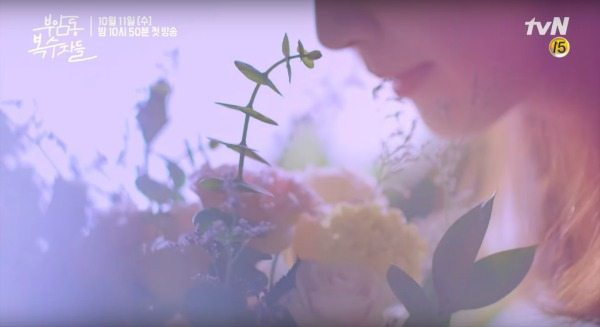 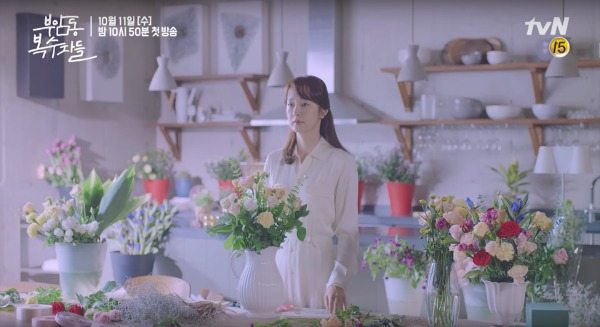 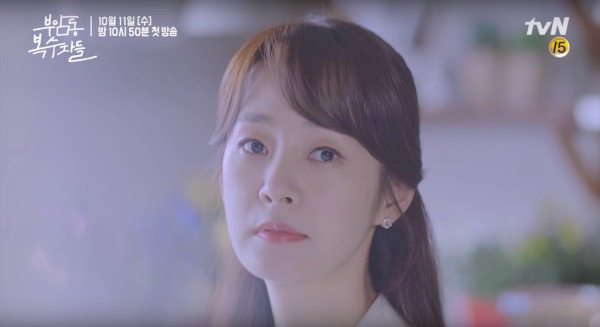 Sounds like one of my mom's fav chick flicks "The First Wives' Club." She loves watching the ending over and over.
https://www.youtube.com/watch?v=Q_oFL_b719g

Omg, this is just so cute!!! The song, the message, the 3 of them. I will check out this movie/drama. Thanks for your random sharing. :D

So do I; I love the first wives club and I got that vibe too from these synopsis.

Yess!! The First Wives Club was such an awesome movie!!

Lee Yo Won looks great as always. I'm getting Woman of Dignity vibes from this.

On a totally different note, the back view of the trench coat person without any clothes showing below, totally makes it look like a pervert...

when I rewatch the scene again, I'm not supposed to smile but I did coz of your reference hahah. Is that the standard trench coat for flashers tho or what?

This looks be good! Three female leads played by veteran actress? Oh I'm so in!

Sounds interesting but the question is... will it be subbed? heol.

Look at all these fiercely beautiful women! I hope this is really good. I was looking forward to Woman of Dignity but felt severely let down, so I hope this one is amazing.

Yes!! They are amazing!! I think I might be looking forward to this show the most. To see not just one, but 3 strong female leads makes me inordinately happy. I pray it is good!!!

Oh! Please, please let this show get subbed. I love TVN dramas but lately I can't find them subbed (legally) anywhere...I guess TVN and DF had a falling out?

Interesting trio of method actresses to watch. Pragmatic plot strike a chord with women from all walks of life. A must watch drama!

Count me in. Love the premise, and love these actresses.

I feel like Lee Yo Won needs to branch out and do something different. Her past two roles have been very similar, and it looks like this is following that same template. She's a talented actor so I'm not sure if she's being typecasted or what here.

I think she is doing roles that she is at her best. This is revenge drama, so totally different genre.

Back then, when I first saw Lee Yo-won in Queen Seondeok, I honestly wasn't fond of her, whether it's her acting or her as an actress. But after that production, I don't know why I alwayals followed her next productions. And I feel strangely attached to her. I can't perfectly recall when it's started, but I can say I grew liking her. Espescially when she laughed and blushed. ?
Lee Yo-won is one of the actresses that broke my expectation and made me really like her. She's also so pretty... As she's aging, she's even more glowing...

that is supposed to be a response to Kiara :) I hope this new Avenger Wives' Club will be equally good.

Avengers Social Club? I'm so immature that I laughed a bit at the title because when I hear avenger,marvel instantly comes to mind.

either way I'm so excited, two of my fave actresses is in this Ra Mi-ran and Lee Yo-won as for Myung Se-bin, I kinda can't remember her but if the drama is good I might end up liking her too cause I'm just that easy to please.

On a side note, drama please don't disappoint :)

This is what I need now. lol. After Woman Of Dignity, I look forward for more veteran actresses headlining drama. Kinda tired to see young generation actors in kdrama, what more with faces that I refuse to watch. ? Myung Se-bin- it's been a while. Her role as Solnan's mother in King's Daughter is quite memorable one. Lee Yo-won & Ra mi-ran also would be great!

Hope it will be subbed, and won't be surprised if it will do better in ratings than Criminal Minds.

I can't wait for this drama...

A good choice after Unnie Is Alive ends!

Quite excited for tvn's new offerings.

Sounds good, maybe should give it a try :)

i thought it was shin min ah in the head picture.. the cast look great

I'm so excited for this! Currently I'm finishing up on Womans dignity and it feels super refreshing to watch dramas with middle aged actresses who can hold their own. I like all three leading ladies, so this one is definitely on my list to watch.

I got kinda teary-eyed thinking of women doing it for themselves.

The man in Lee Yo Won's character is probably Jun(U-Kiss) since he's also part of this and he is the 4th lead and also the only man part of the club. According to Asianwiki, his character is Lee Yo Won's husband's son who wants to take revenge on his biological parents. I'm quite excited to this. Lee Yo Won and Ra Mi Ran ♥♥♥

Would have loved to see Drama Beans Summaries on this one- was confused a bit in Episode 6. Subs on Drama Cool.