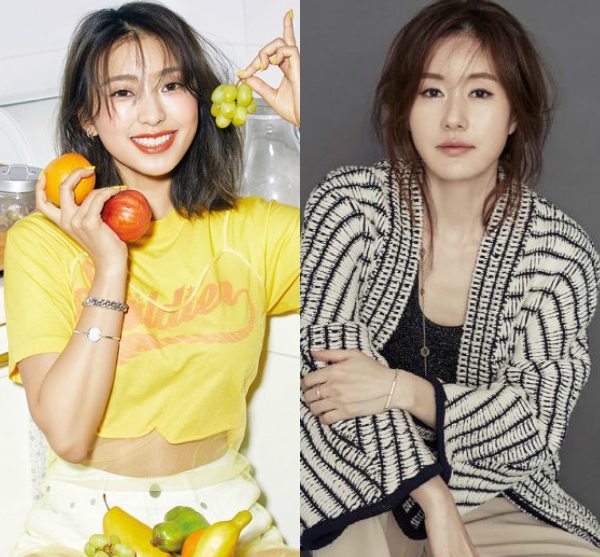 I kind of love how some male characters in the original Journey to the West epic are being turned into female roles, and I wonder how that dichotomy will play out in the show. Bora will join the mythical majority of the cast as top star Alice who is signed onto the Bull Demon King’s entertainment company, aptly named Lucifer. This would make her a colleague of fellow in-show celebrity PK, played by Lee Hong-ki (Modern Farmer), whose mythical counterpart Zhu Bajie (or the Pig) has the power to seduce women and suck their life force.

Alice, has “unwittingly” lived as the Jade Dragon, son of one of the four Dragon Kings. Hm, so is her dragon half lying dormant inside her human half? Either way, I’ll be interested to find out whether her popularity as a celebrity has something to do with her dragon powers, similar to PK. I don’t recall ever seeing Bora act in anything, though it looks like she’s had small parts in Doctor Stranger and Shut Up Family, but I’ve enjoyed her appearances in variety shows, so I’m hoping her likability helps add to a positive performance.

Kim Ji-soo’s role is described as more of a special appearance than a main one, but she’ll be an important figure in Woo Hwi-chul’s life, because she’s his first love and dramaland mandates that first loves are highly important. Her mythological counterpart is Princess Iron Fan, wife of the Bull Demon King, who has a particularly antagonistic relationship with Sun Wukong, the Monkey King, who will potentially be played by Lee Seung-gi (You’re All Surrounded) if he confirms. It’s almost comical how much at odds they are at times in the original Journey to the West saga: At one point, Sun Wukong turns into a fly in order to enter her stomach, where he proceeds to punch her guts until she hands over her fan.

With such a large cadre of characters, it’s hard to tell whether everyone will somehow intersect with the central premise, which follows Oh Yeon-seo (My Sassy Girl) as the monk character in the modern retelling as she fulfills her unwanted fate to exorcise demons. Other cast members include Jang Gwang (Thief-nom, Thief-nim), Lee Se-young (The Best Hit), Choo Ja-hyun (A Man Called God), YG rapper ONE, and the ever-fantastic Lee El (Black).

Hwayugi is set to premiere sometime in December, taking over tvN’s Saturday-Sunday slot.

Via My Daily, Seoul Kyungjae

Wait, Lee El is in this? Now I'm duty-bound to check out at least four episodes.

same here... and then I predict I will be frustrated by the short screen time she had a la goblin.

well, at least, the premise is interesting.

Lee Seung Gi's getting discharged in a few hours and CJ/TvN even added a drama to air before Hwayugi and they said it's to wait for Seung Gi while they pushed his movie again for next year (it finished filming before he enlisted -_-), Bora is a 1+1 deal with Seung Gi (his agency is shameless) but I hope she turns out okay, never watched her in anything to judge, but she's likeable on varieties.
I swear if Hong sisters secure Seung Gi and with Cha Seung Won, Oh Yeon Seo, Lee Hong Ki and everyone else, but then give us a crappy drama, they'll catch this fist.
That said, I'm so excited for this.

I might be in the minority, but I feel like Hong Sisters have been in a steady decline since Master's Sun. Some might say since Big but I don't know since I didn't watch that show. Hopefully, this will bring back some of their magic. In spite of myself, I have enjoyed most of their dramas and for what it's worth, they know how to make me laugh.

Big was a big joke, sorry lame pun. TvN also has been in decline, I hope both snap out of it already, the cast alone won't carry the drama.
But like you, when I like a Hong sisters' drama, I'm inlove. From My Girl, You're Beautiful, my all time favourite My GF is a Gumiho, Best Love and Master Sun. They delivered.

Live Up to Your Name is the best recent drama from TVN.

I never finished watching Hong Sisters' drama except My GF is Gumiho. I started watching Master's Sun about 3 months ago and I still stuck at episode 7. It feels so out-dated, though it's one of the latest hit from Hong Sisters. I also didn't really enjoy Gumiho if it's not for my imaginary boyfriend Lee Seung Gi, I would not finish it. Drama nowadays has to give a slight of slice of life even though the realm is fantasy. Meanwhile, characters in Hong Sisters' drama doesn't feel like they behave as real people, especially the female leads.
However, I'll check this drama for the first 2-4 episodes only for Lee Seung-gi

Dear Ms. Hope, I really hope this one to be an excellent Drama. Personally I don't believe in the sequence "one good Drama follows one bad Drama" on the Hong Sisters, but I've seem some of her works and they are excellent when dealing with fairytales (My Girlfriend is a Gumiho, lots of elements of Master's Sun) folktales (Hong Gil-Dong, Delightful Girl Choon-Hyang) and the Media (Greatest Love, You're Beautiful). So they are combining several elements they are strong at, and the slapsticky nature of the source lends itself to be adapted into their style (if you like to read, look for "Monkey", Arthur Waley's somewhat free translation on the Classic "Journey to the West" by Wu CHeng'en).

Also, after that miserable flop that was Mad & Boring (or was it Warm & Cozy?) they must succeed, so we will (hopefully) see them reborn like the Phoenix ;) .

Interesting LSG said when he was discharged he needed time to get the solider energy out of him before going back to celeb life. Not sure how much "time" that might be. So I wonder if he really accepted, though I can't imagine he said no to this considering no other names are being floated around.

more like.. he said yes.. and hence they are courting all big names.. and everyone is going all out to make this become as big a news as it can to promote seung gi

he will sasshay in at the end to announce he signed

I know that Dramabeans is a basically gossip free zone in the blog sphere working the K-ent, but shouldn't the passing of Kim Joo Hyuk be at least mentioned around here?! We lost a great actor today after all.

Thank you for alerting us to this sad news @newbie It's really shocking.

I'm sure they are working on it. The legendary producer/director Kim Jong-hak's article wasn't posted until the end of the day.

Our binnie walls are full of sad messages about Kim Joo Hyuk.

And since this article is about Kim Ji Soo, she and Joo Hyuk were a couple for a really long time.
I will terribly miss Gutaeng.

I am still in shock seeing the news. Korean entertainment industry lost a gem , because he was a brilliant actor.

I think dramabeans should mention any demise of an actor/actress, so that we can pay tribute to their hard work.

Is this going to be a 40 (or 80 depending on this double episode format) episode drama? Seems like they're going to have a hard time doing justice to the cast/characters.

It is probably doable in a 16/32 format but not in the typical kdrama style of too many character subplots, side stories and lingering OST sequences. An epic story told in a Game of Thrones or like "Legend of Condor Heroes" style.

I am getting my hopes up but still have a nagging feeling that it might end up a trainwreck. It doesn't sound like it should be boring nor is there a lack of source material for the characters or story. But tying things together logically will be the main issue.

I don't think it is a Journey to the West adaptation. They are just going to borrow the personalities of the JTTW characters and some of the myths and character relations of the original. It won't be an epic with many tribulations to overcome. It will still be (like most other kdrama) a romance story with a fantasy element to it.

Fingers crossed they do a good job. I've made a few comments regarding this project in past articles so won't bother repeating.

As you say, it could end up being a romance within a fantasy framework, which is where my post above raised the issue. To be in a grand romantic style, it would have to focus screen time on the main couple - which leaves very little (one guesses) for the rest of the cast.

If they're planning to borrow the JTTW characters but substantially change their basic motivations (a quest for redemption) then place them in a different setting and not follow the JTTW story/framework, it begs the question of why make any reference to JTTW in the first place.