Joo Jin-mo and Ji-soo tap into their dark side for Bad Guys: City of Evil 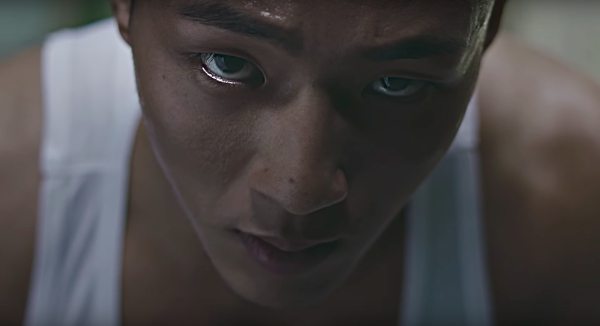 I’ve been looking forward to seeing Ji-soo take on this antihero sort of role ever since his casting news came out, so I’m ecstatic to finally see him in character for the OCN spinoff Bad Guys: City of Evil. To be honest, it took me a few seconds to realize that it was actually him in the teaser, so props to both the directing and his acting for transforming so drastically, especially after his last drama role in Strong Woman Do Bong-soon. A character teaser has also been released for Joo Jin-mo (Woman With a Suitcase), who is chillingly convincing as a “reformed” ex-con, though the body count in this clip might indicate otherwise.

It’ll be interesting to see what motivates Joo Jin-mo to join the titular “bad guys,” since he isn’t incarcerated at the beginning of the drama. Instead, he’s hidden his shady past as a former mobster, and runs a small restaurant in a local market. Though, if his character is any indication, his past might catch up to him: Intercut with snippets of him lopping off a fish’s head are the downed, bloody bodies strewn about in his restaurant. Is it just me, or are those noises of him hacking at the fish super unsettling?

Park Joong-hoon (My Dear Desperado) remarks that “this area is a sewer he’s created,” scoffing at the idea of the former gangster trying to live quietly. He goes on to say, “The world won’t let him.” One of the beat-up henchmen gets up and tries to run out of the restaurant, prompting Joo Jin-mo to throw a knife, which embeds itself right in front of the terrified man. Ever since I first watched Joo Jin-mo in Fashion ’70s, I’ve always thought the actor had oodles of charisma, and I’m so excited to see him channel that into a less-than-clean role.

It’s harder to tell whether Ji-soo’s role will be quite as dark, but seeing as how he ended up in jail for a crime he didn’t even commit, I’m going to hazard a guess that there’s a lot of pent-up anger in his character. Labeled the “hyung support” who has been left with only thoughts of revenge, we see Ji-soo keeping in shape while incarcerated, doing a perfect, two-handed plank with his feet in the air. My abs are cramping in sympathy just watching him. Park Joong-hoon introduces him as someone who took responsibility for another’s crime, and got hundreds of millions of won in return. He ends the trailer by narrating that “those eyes won’t betray you.”

Though I was initially a little disappointed that the second Bad Guys would be a spinoff rather than a sequel, after seeing these promos, I have to admit that I’m quite excited to watch these new characters populate this particularly crime-rampant, noir world. Joining criminals Joo Jin-mo and Ji-soo are the morally gray law enforcement figures, played by Park Joong-hoon, Kim Mu-yeol (My Beautiful Bride), and Yang Ik-joon (Mystery Queen).

Bad Guys: City of Evil will premiere on OCN in December. 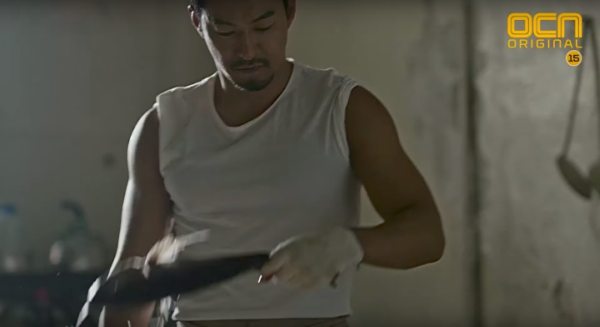 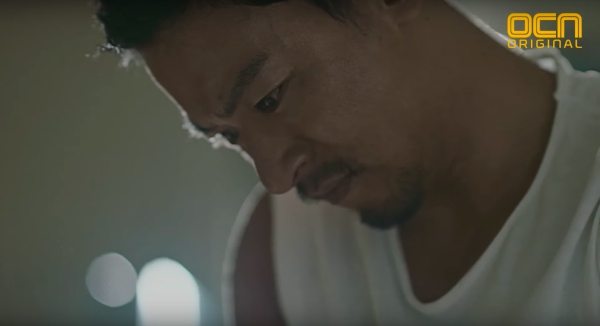 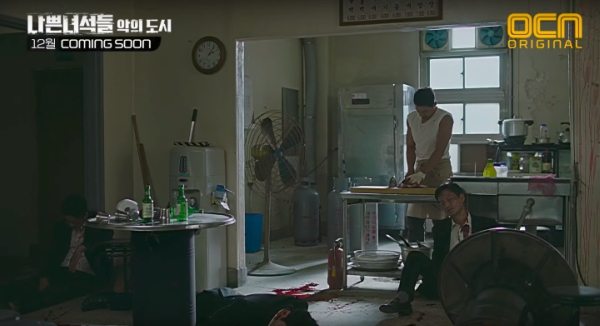 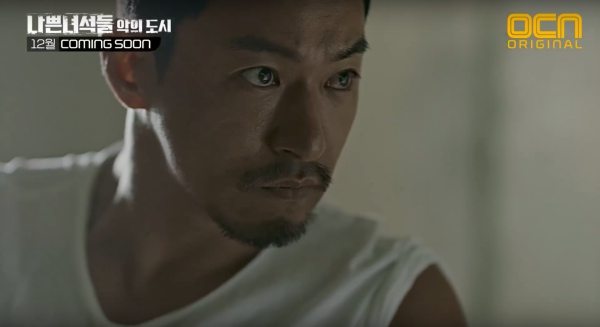 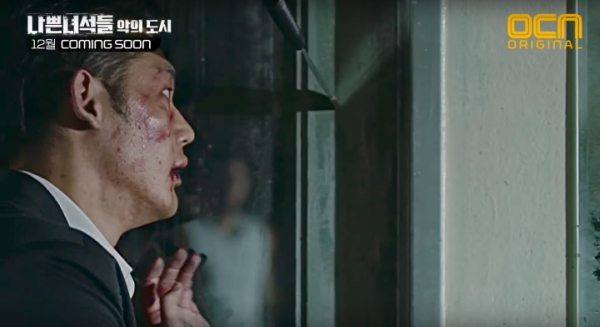 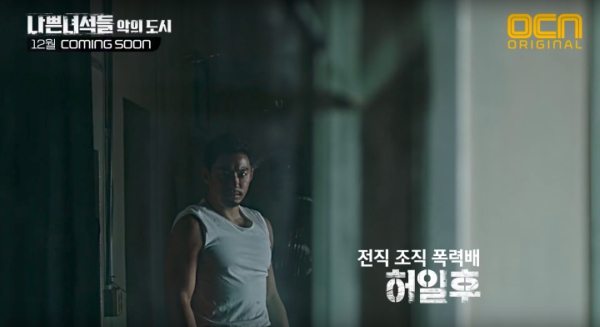 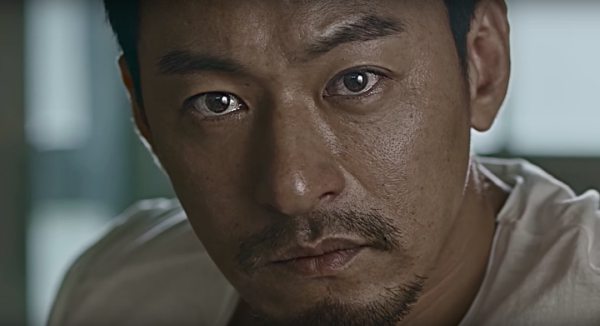 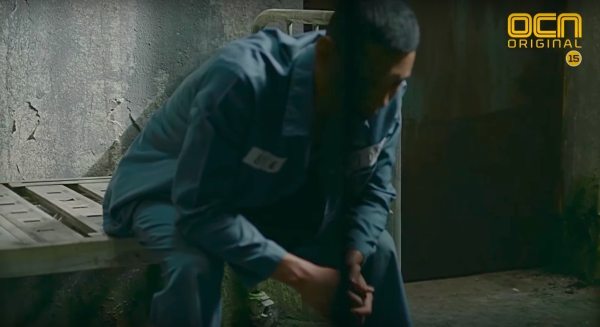 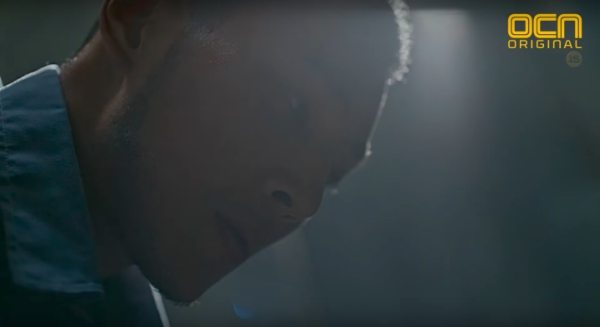 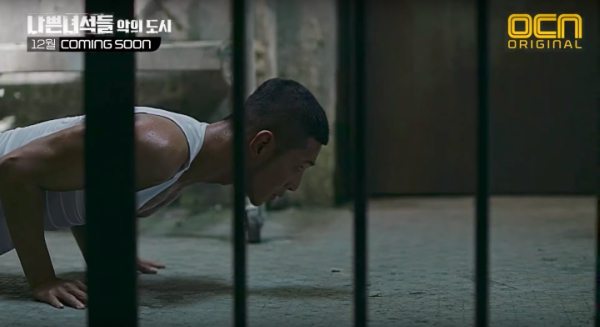 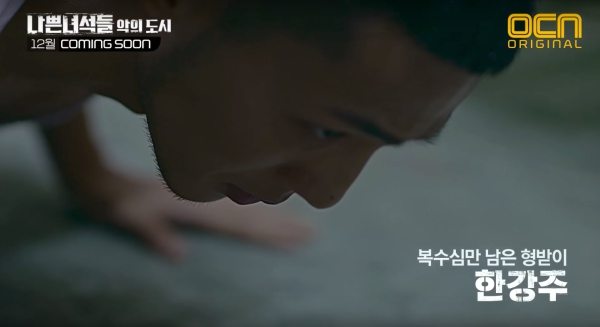 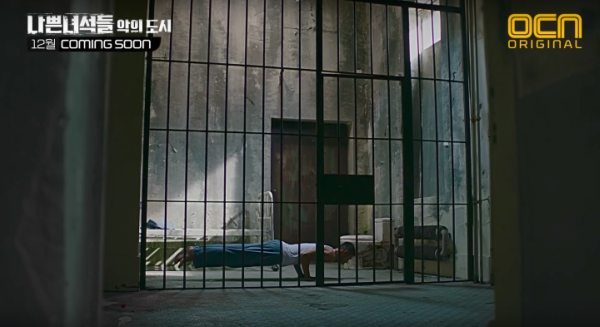 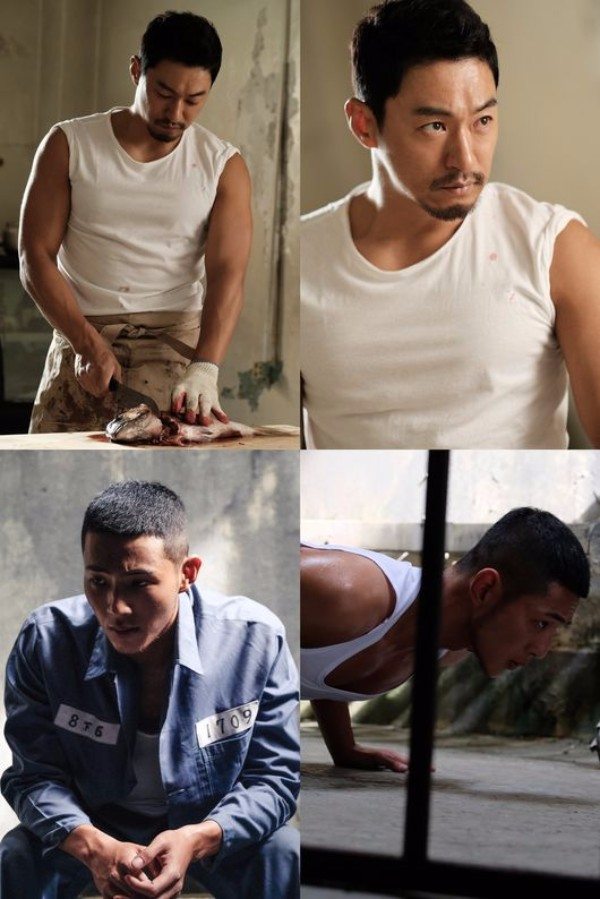 eeeek! They both look so bad!

I've been waiting forever for this to air and so ecstatic to see the stills and trailers so far!! Gobbling everything up and can't wait for badass vengeful Jisoo!! 😍😍😍😍😍

Oh Jisoo. My dear Jisoo. You are about to be put on center stage. I've only known you as a guy who pines at the female lead. You do that very very well. I will be judging you here with all my might. Do you really have what it takes to be put on the same level as your co-actors? Are you really that good or am I just blinded by your good looks?

only one way to find out...

I'm very nervous to see how he measures up...but I am so hopeful too!!! Come on, Jisoo!!! Show us what you've got!

I thought he did well in One Way Trip but that was with fellow rookie actors, even talented ones like Ryu Joon Yeol and Kim Hee Chan. I hope he can do well with no girl to pine over on tv too.

I wasn't going to watch this until they cast Kim Mu-yeol and Yang Ik-joon. Hope it's good.

Same. I have to watch just to see them. Sigh

Omg, if you presented these pics of Ji Soo to me without commentary I wouldn't even know who was in them. Both these teasers are great and I'm looking forward to a longer trailer later. It's nice to see talent outside of the romantic drama bubble as you really do see just how far the range stretches. I'd say, I've seen limitations in Ji Soo's acting already but I'm looking forward to seeing another side to him.

Wow. It should be illegal for Ji Soo to look that good *swoons*

Oh my. . . I was thinking of maybe watching, but these teasers did their job, I will be watching!!

I think this kind of character will suite Ji-soo a lot better than the one in SWDBS. And agreed on Joo Jin-mo's charisma. I loathed his character in Woman With a Suitcase (hated everything about the script for that drama, actually) but even playing a chauvinist his charisma flowed through unfettered. And yo PROPS to whoever directed these teasers cuz that camerawork... it's hot

Good luck Ji-soo, it's tough to match up with veterans' acting and charisma. As long as he can work with his subtle and not over-intense in his acting, he will be fine.

Ahhhh I am way too excited for this!! I've been waiting for Ji Soo's drama comeback since forever since being disappointed by his character in SWDBS. I feel like I'm already going to love his character already 😍

I loved the original Bad Guys. What a cast. That being said and this being a spin off I think Ji-soo will be great in BG2, sorry BG:City of Evil.
He is by far the youngest by age of the main cast. From what I can tell he is the maknae and these guys (in the cast) are going to watch out for him. I hope.

and now I plead guilty for inappropriate crush for younger actor,
but I don't feel remorse not guilt.

Aaah I should be excited for this. For a new version of Ji Soo, if nothing else. But I'm not. I enjoyed the two or three episodes of the first installment of Bad Guys, but didn't watch any further - it's too violent for my taste. Same with OCN's Voice. I'll probably do the same here - check out an episode or two. :(

This looks bad ass!! Plus the kind of role I'm dying to see Ji Soo tackle since his Angry Mom days. I was disappointed previously over not recasting, but not anymore!!! Bring it on!!

I loved Ji Soo in Angry Mom... Didn't watch him in Do Bong Soon, because that show just wasn't for me. I couldn't sit through Scarlet Heart Ryeo either. So hopefully this drama will be good enough for me to stay on.

Looking at all the pictures, I was like "where's Jisoo?" I seriously thought it was Jo Dong hyuk! Jisoo in here looks similar to Jo Dong hyuk's character in the original season.

I'm so excited for this drama. Will be watching it once it finished airing :)

jisoo looks so bad, in a good way. count me in.

Oh Such luck we have! First, we had Park Hae Jin as the brain and now Ji Soo as the Body! OCN is really doing great this year. Looking forward to it.

Wow thank you!
They look bad, don't they? And hot. Joo Jin Mo as usual, his charisma is no joke, he's got this bow-before-the-king attention demanding presence on screen. Ji Soo is a nice surprise (honestly, I thought he might be the acting hole here, but from what I've seen so far, he will able to be a match).

Waiting for more teasers. I'm sure Kim Moo Yeol and Yang Ik Joon will deliver in their respective roles. Only Park Joung Hoon is a mystery to me as I haven't seen him in anything.

I can't wait for this show ! Joo Jin- Mo is no good for my health right now T T. Why does he have to look this good.

Oh so excited about this! Think this might reignite my Joo Jin Mo obsession

Holy Hotness!!! Why does bad look so good on both of them???? Love it! Jisoo, I'm ready for you on my screen!

26 bebeswtz❣️Xiao Zhan is my happy virus

What is up with Ji Soo and his sideburns?????

let's just say that I could count each individual hair on his chin. HA HA HA HA HA. sweet puppy. some men just were not meant to pretend to grow a beard or any facial hair...
LOL

Joo Jin Mo is like the hot ajusshi type haha

Ji Soo.... I hope he does well. He should be ok if his character gives him something to do, instead of being flat and boring like in SWDBS or wasted like in MLSHR.

I personally think Ji Soo is scary as a bad guy. He left a great impression playing one in Angry Mom. He was able to tap into that attitude.

I missed Ji Soo. He looks really bad ass here. Hope there won't be a second lead syndrome there…