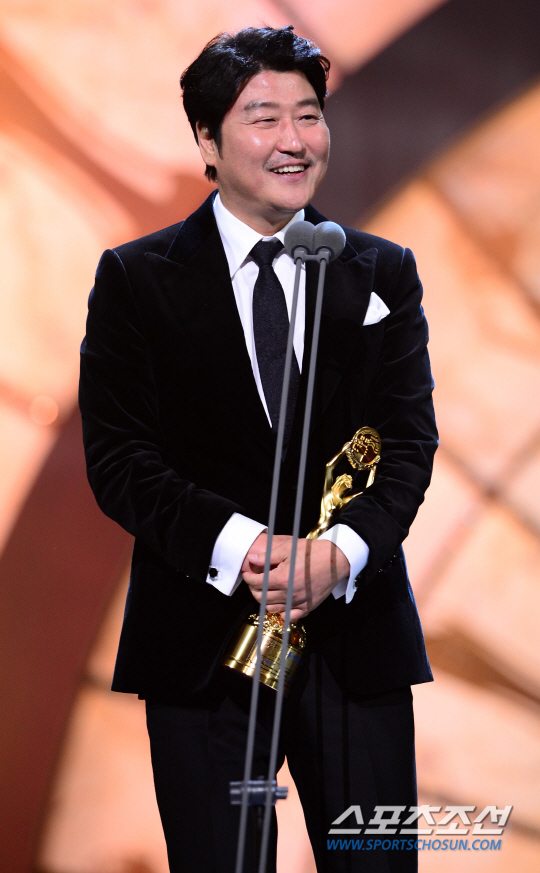 Now that the end of the year is approaching (eeek!), we can look forward to the slew of beautiful stars strutting their stuff on the red carpet for awards season. The 38th Blue Dragon Awards celebrated some of the biggest films this past year, including surprise tearjerker I Can Speak and political thriller The King. There was a good spread of awards given without one film sweeping them all, but A Taxi Driver was definitely one of the big winners of the night.

The historical drama about a taxi driver who gets swept up in the ill-fated Gwangju Uprising won the Best Picture award and its lead actor Song Kang-ho received the Best Actor trophy for his portrayal. The film also picked up the Box Office Audience Award and a trophy for its music direction, which I love, because I recall A Taxi Driver’s box office performance doing well above and beyond expectations, especially since it was in direct competition with the highly anticipated blockbuster Battleship Island this past summer.

Veteran actress Na Mun-hee beat out fellow nominees Kim Ok-bin, Yeom Jung-ah, Gong Hyo-jin, and Moon So-ri in the Best Actress category for her role in I Can Speak as a grandmother with a penchant for submitting petty complaints to city hall. One of the more surprising wins of the night was in the Supporting Actor category, where Jin Seon-kyu won over Yoo Hae-jin, Bae Sung-woo, Kim Hee-won, and Kim Dae-myung for his role in Crime City. I was really happy for him, since he seemed so genuinely surprised to hear his name called, and I liked him even more for his tear-filled, hilarious acceptance speech. 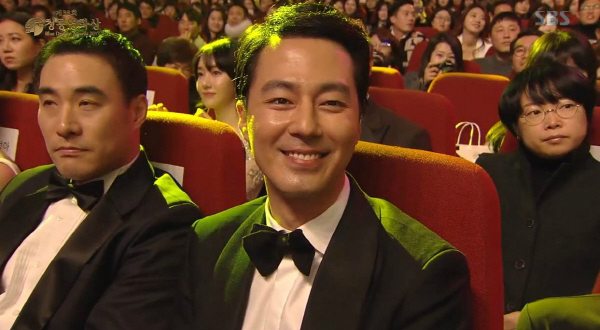 Another humorous moment of the night came when Jo In-sung joked he was fulfilling a drunk promise when he came up to accept the New Actor award on D.O.’s behalf, who made it to the ceremony late due to an EXO concert. I appreciated these brief moments of levity, because the ceremony made time to honor the late Kim Young-ae, Kim Ji-young, Yoon So-jung, and, of course, Kim Joo-hyuk, which had their peers (and me) in tears.

I was glad to see that Jo In-sung did later collect an award for himself as well, in the Popularity Award category. He was joined onstage by an eclectic group of fellow actors and actresses in the same category, with a dapper-looking Sol Kyung-gu, adorable Kim Soo-ahn, and Na Mun-hee collecting their Popularity Awards. See below for the full list of winners! 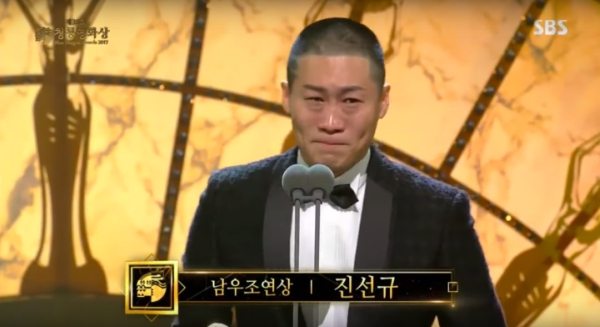 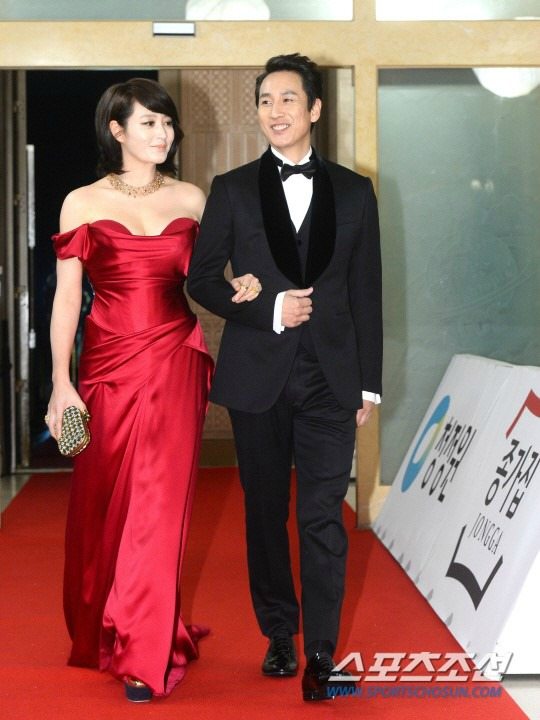 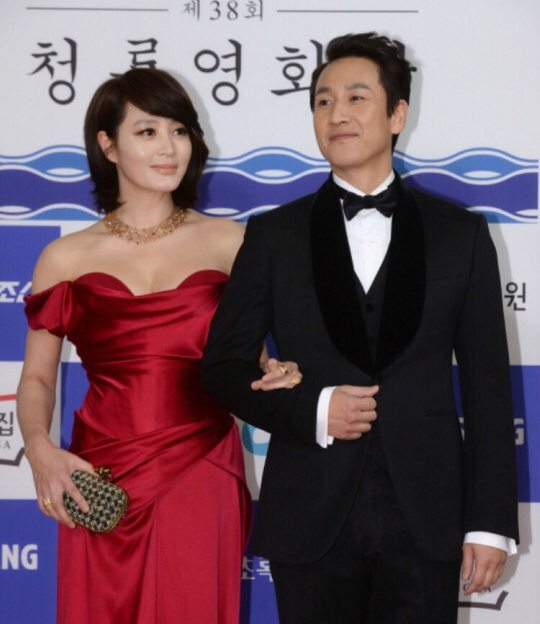 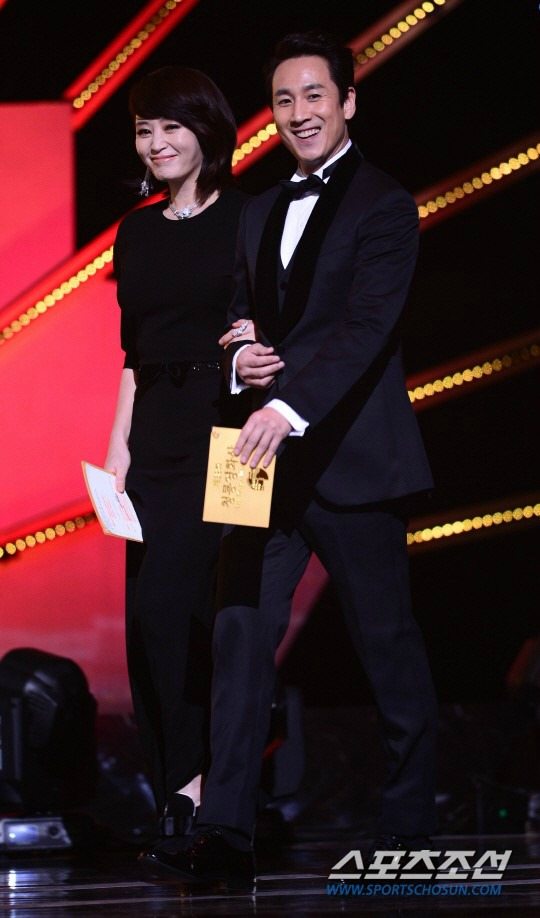 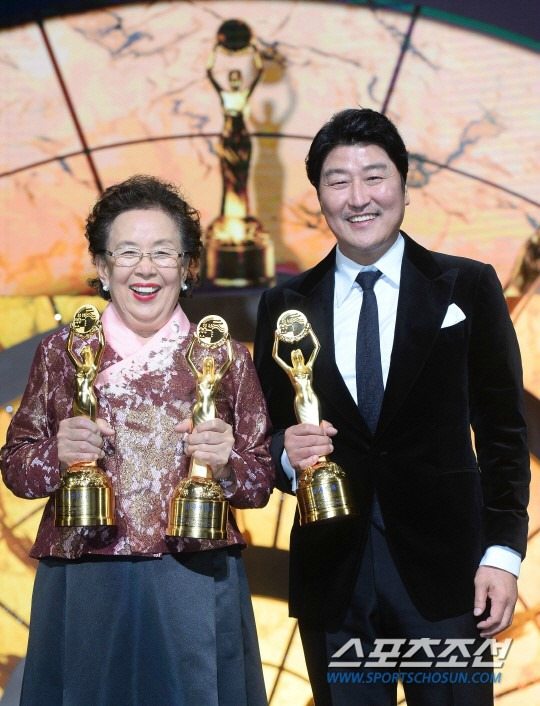 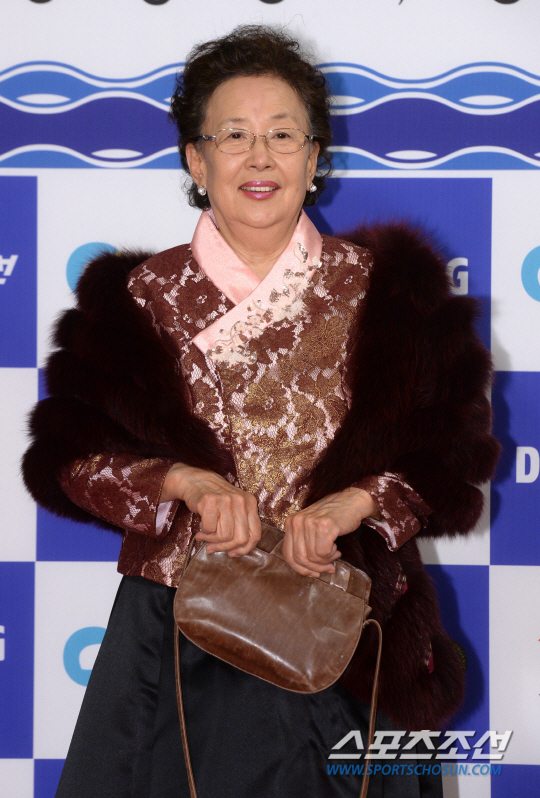 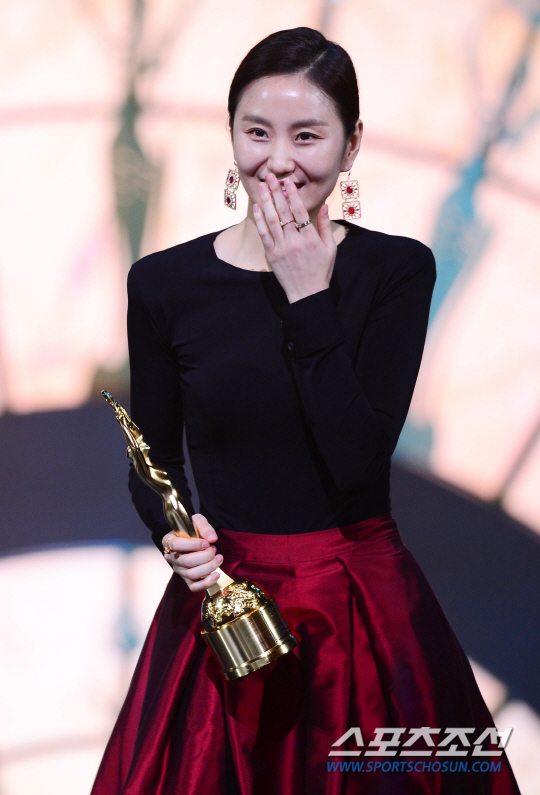 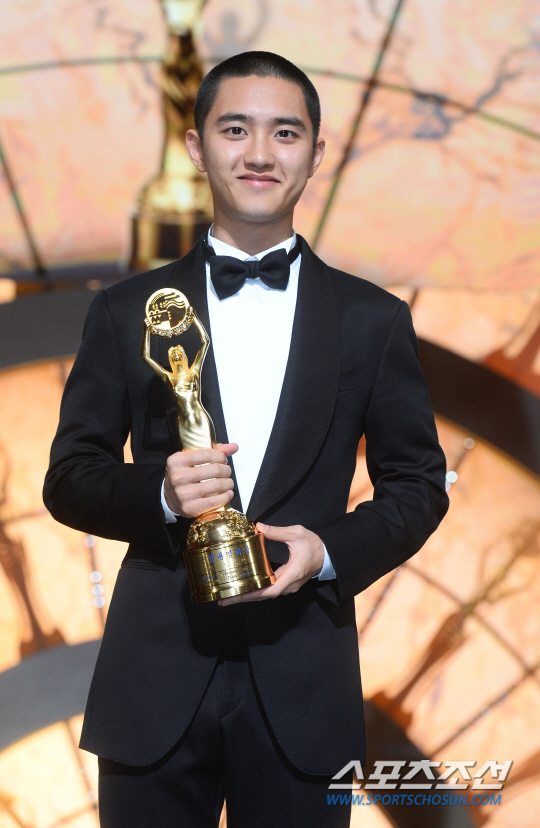 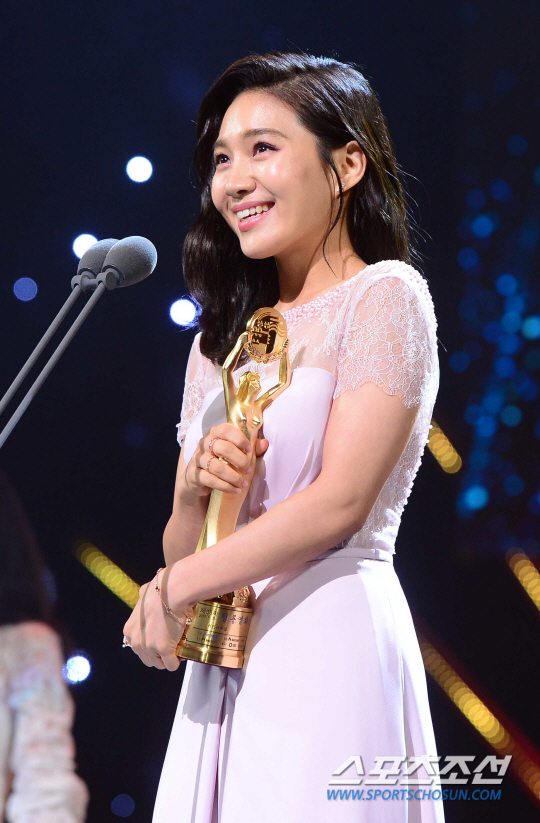 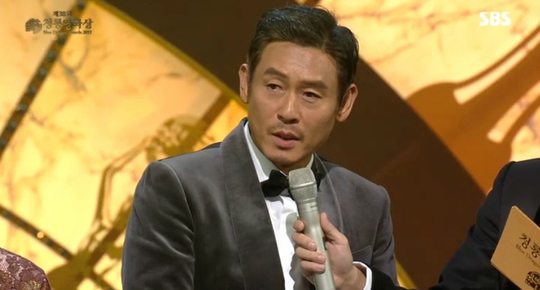 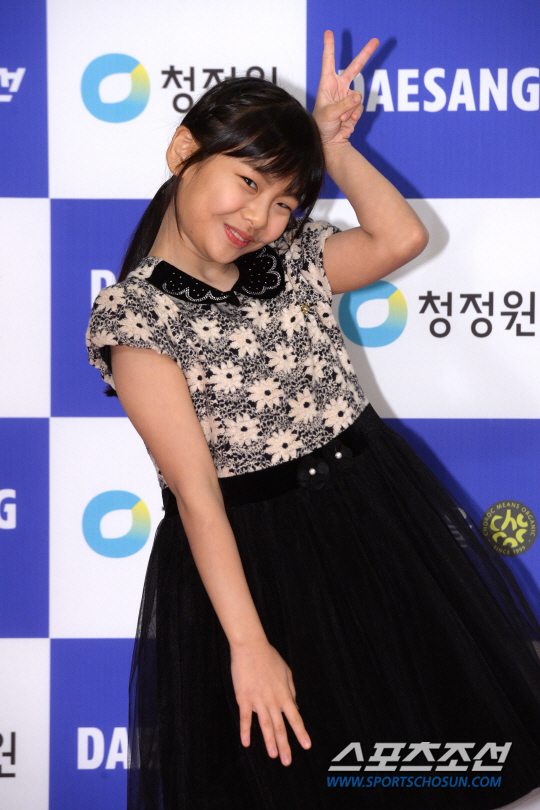 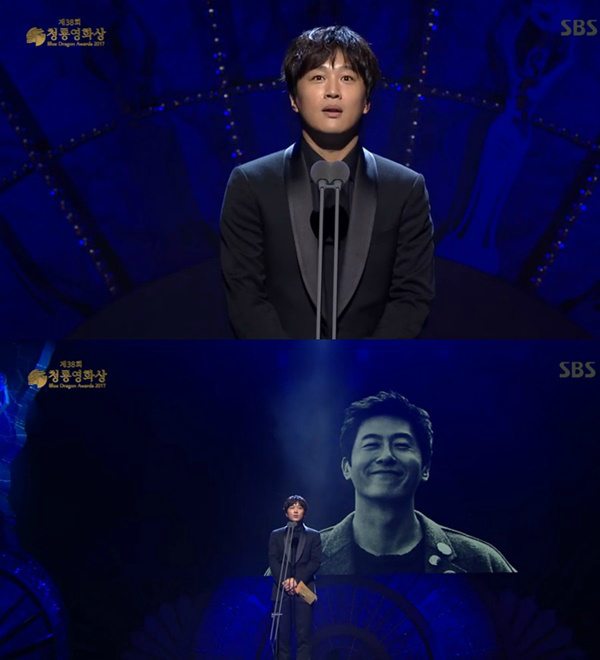 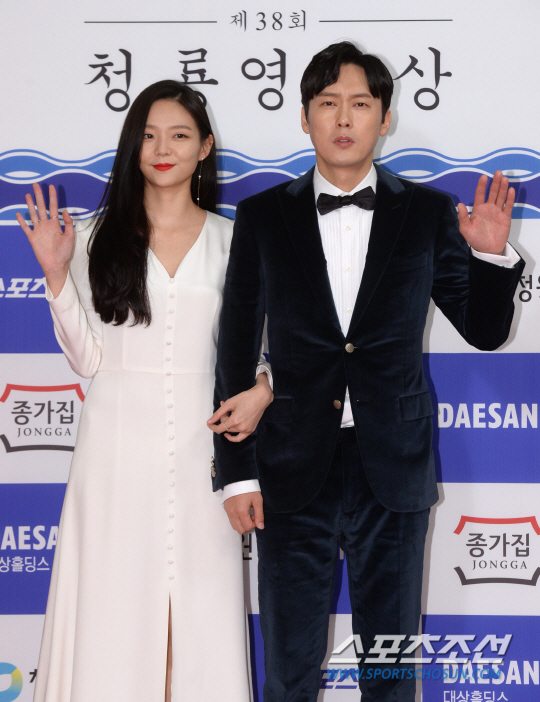 Daebak, one of the BTIOFL couples!

Yaaaaay!!! The last photo made me really happy!!!

Aaaah Lee Seon-kyun, my favorite ahjussi! I love his smile.
And I hope "I Can Speak" will be available and subbed soon, because I've been anticipating it. Great to see it's doing well.

PS: I need Jo In-sung's awesomeness back in dramaland

Congrats to our DO baewoo and all the other winners. He gave his acceptance speech at The ElyXiOn because he couldn't be there to receive the award himself. Look at his little chestnut head, so precious. Also, that little girl is so squishy.

Also, I love Kim Hye-soo red dress. Too bad we won't get any red carpet photos. It would have been nice to see them.

I’m so happy to see his success in Chungmuro despite killing in music wise with EXO. An idol shaving his head for a role? True dedication. His friendship with Jo In Sung is adorable too.

Is I Can Speak good? The premise sounds absolutely funny!

Song Kang Ho picking up yet another award, so well deserved.

Out of topic but beanies did you see the news of Ma Dong Seok scoring a role in a Marvel movie?!

I heard that he got the offer from Marvel but turned it down because it conflicted with projects he had already committed to! Has that changed?

It's a pity because I would LOVE to see him in a Marvel movie, but I have mad respect for him not abandoning Korean projects to do it.

I'm not surprise they picked Ma Dong Seok. He is a fantastic actor and speaks very good English.
He has been rocking it in Chungmuro this year too with a back to back successful films.

You mean Taecyeon? I'm not a fan, but i find his choices were admirable. He didn't just gave up his green card (not citizenship, cmiiw), but also did surgery to fix his illness so he can serve as an active duty army. Even without the green card, He was already exempted from active service due to his healt condition. I never see it as a gimmick for popularity, never thought that far to be precise LOL.

YAAAAS for "A Taxi Driver" and Song Kang-ho! I wouldn't have mind if he shared the best actor award with Sol Kyung-gu.
Na Moon-hee <3. I'm glad yo see Kim Ok-bin on the nomination list for best actress.

Okay, if Cha Tae Hyun is the one they’re going to ask to deliver the tribute to those actors/actresses we’ve lost this year (RIP), I’m pretty sure there wasn’t a dry eye in the house at the end of the night 😭😭😭

Tipsymocha, you sure know how to order your images for effect! :D 👍

Can someone translate Ji Sun Gyu's speech? I love him!

Here we go!
"Thank you, thank you very much...I'm not even handsome...I'm not from China, I'm a korean citizen. I was really nervous coming here (to the ceremony) that I took relaxing pills. Had I known I would receive this I would have taken another one *burst in tears* I received a lot of help throughout my life, there are too many people I have to thank but I will make it really fast. first the people who made this possible, also my my wife who is sitting somewhere here. "you went throught a lot. I love you"...I have to calm down *shakes his head like a mad man* I would like to thank my parents, my in laws, my friends *starts naming his friends* they always told me to fix my nose and that I wouldn't make because of my nose *I'm not sure about this part tbh*" then he thanks his comapny his best friend and "...who didn't I talk about?" *People -yelling- giving him hints* he thanks the director, staff and actors of Criminal city
"Also, for the poeple I couldn't mention here I will make sure to give you a call" He finally thanks his sunbae and hoobae and every movie lover out there. *He also talks about the galaxy and becoming a better actor in the future but I couldn't understand what he meant lol*
Sorry I got lazy by the end of it but I hope it helped and someone will actually read it.
It was both a touching and hilarious acceptance speech
Congratualtions to Jin Seon Kyu!

Glad to see so many foreheads of actors. Never liked the bangs on men.

Lee Seon-kyun is a hottie.

Why is there no word on Kim Joo Hyuk's death at DB? This site focuses on Korean entertainment drama and also films, I was wondering why no post , nothing about his unfortunate and untimely death. (This is one of the times where time travel should be possible to make his death come undone) . Even here not a word. Why is this.

Dramabeans is first and foremost a site for analyzing kdramas and kmovies not necessarily a site that posts k-ent news. I don't think news of Kim Young-ae's death was reported either.

Many of us commented about it in (I think) Open thread right after his death was announced. I just watched the 2 days 1 night episode where they featured him and I sobbed.

Watch their first vlog. They've said why they didn't write anything about it.
Too sad and leave it at that.

Kim Hye-soo is THE queen. Her aura is unbeatable

There is a specific section called 'NEWS' here at DB that fills in news about drama and film. Extremely odd and strange to not briefly report this star and actor's death.

The last pic made my night! As always Kim Hye-soo looks fabulous. Congrats to all winners, was well deserved.

This page ceretainly has all the info I needed concerfning
this subject and didn't know who to ask.

Too cute DO and Jo In Sung moment. Happy for DO but kinda funny that I read in Naver http://m.entertain.naver.com/read?oid=076&aid=0003184492 judges think Ryu Jun Yeol acting is too skilled to be categorized as newcomer, so why nominated him in the first place? Song Kang Ho is a gold and this Choi Hee Seo lady is really killing everyone this year, way to go baby!

Did judge say so? Cuz apparently from the judge's voting it's D.O vs Kim Joon han (Park yeol). It's a tough win thou, they're like super close. It's a tradition for BD to grant rookie award for rookie male LEAD in breakout successful project (if it's an indie/arthouse film then it's sealed lol), so it's kinda expected D.0 will get it considering other nominees' roles.

Yes from my understanding they said he gave an experience actor performance unlike a rookie, so it is difficult to judge him as a rookie. Anyhow, I think DO is such a promising actor, I love him in I remember you as well. Seems like 2017 is his year after big win in AAA.

I'm glad A Taxi Driver and I Can Speak won awards. The acting was amazing, their stories were heartbreaking, and it was also a good history lesson.

Oh my. D.O. is literally doing great in the industry. He gets recognized not because he is in EXO but because he really is a good actor! Love him to bits. 😊

This is off topic, but anyone knows if Jo in sung attended Song-Song's wedding cause I never saw a picture or clip of him attending it. I believe he never misses important occasions for his friends but I wonder why he didn't come? Or did I just not see him? Any link guys? 😢

Young actors might be queueing up just to be auditioned for Lee Joon ik's films. He got Yoo Ah In the legendary Best Actor's trophy, Park Jungmin's rookie trophy, now Choi Heeseo literally swept all rookie awards. Master of promoting young talents! His next project (Byunsan) would star Park jungmin and Kim Goeun. He all entrusted his recent projects to young actors (Park Yeol, Dongju, Byunsan), which is so rare for one of the most recognized directors of Chungmuro.