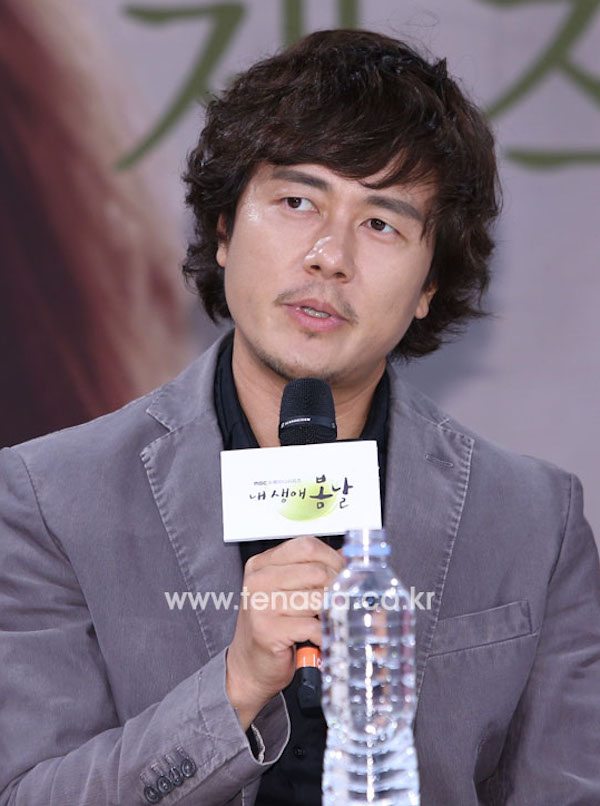 Once nicknamed the “King of Melodramas,” actor Kam Woo-sung has some of the most soulful eyes I’ve seen, and when they shed tears like in My Spring Days and The King and the Clown, I can’t help but cry alongside him. Fortunately, we’ll possibly be seeing him soon in dramaland, as Kam has just been offered an SBS drama tentatively titled Should We Kiss First.

If he confirms, he’ll play a lonely bachelor named Sohn Moo-han. He works at the leading advertisement company in the country as a production director. At one time, he was heavily in all the exciting action, writing new projects every day as a copywriter. But nowadays, the only time he grabs a pen is to underline key points during meetings. He has become that old fart that no one listens to—that everyone at the office secretly wishes would resign. Behind his back, he’s called “Money-eating Ghost” and “Zombie Who Keeps Coming Back to Work” by his colleagues. Seen as having no perceptiveness or humor, people tend to avoid him at all costs.

Should We Kiss First is a realistic love story between a tired ajusshi and ajumma who had respectively given up any dreams of passionate romance. Kam Woo-sung’s character, who has been a failure in love his entire life, has one greatest worry: dying alone. His counterpart ajumma’s greatest worry is living the rest of her days alone. When they meet, they mutually comfort each other and begin a relationship. PD Son Jung-hyun (Yeah, That’s How It Is; Thrice Married Woman) is helming the project, with Writer Bae Yoo-mi (I Have a Lover, Twinkle Twinkle) onboard. Knowing those two, there’s a strong melodrama-makjang component to their works, but I have faith that Kam Woo-sung would carry it through successfully.

Should We Kiss First is projected to broadcast on Monday-Tuesday after the end of Doubtful Victory, which begins later this month. That puts the premiere sometime in early next year.

Via SE Daily, IS Plus

He is such a dedicated actor, I lup him!
It'll be great to see him back but he is kind of picky so I'll celebrate when he is confirmed.

I am really glad that the protagonist won`t be paired with a 20 something girl. An ajusshi and ajumma love story? Bring it on! I am waiting for this drama. Hope he will sign.

Ahjusshi and Ahjumma reminds me of Last Scandal feels - Jung Jun-ho, Choi Jin-shil and Jung Woong-in. My gosh, it makes me excited now.

It looks like actress Park Si Yeon received the offer.

Kim Sun-a is in talks for the female lead role. (Which would be great casting IMO).
And Park Si Yeon was offered a different role than Sun-a, probably the second lead.

That's a strong cast, if both Kim Suna and Park Siyeon agrees.

Haha me wanting Park Hee-soon to collab with Park Siyeon again, maybe here or in another project! Their chemistry is too strong!

Whoopee! Thanks for this great news, @tineybeanie!

I loved Kam Woo-sung's turns in ALONE IN LOVE, THE KING AND THE CLOWN, and MY SPRING DAYS.

I don't see actor Kam Woo-sung that often, but I did watch him in the drama My Spring Days and he was great in that. This new drama seems to be a good fit for him.

One of my absolute favorite actors...hope this comes to fruition! I'm in!

Haha... the title sounds so old-school! Loved him in The King And The Clown & My Spring Days though. It'll be good to see him again. 😊

I wonder who will be his leading lady. Can it be Kim Hyun‑joo? She was in both "I Have a Lover" and "Twinkle Twinkle". And she's a fantastic actress.

Kam Woo-sung and Kim Hyun-joo? And writer of I Have A Lover? I would love to see this pairing! Pls make this happen 🙏🙌

He looked so familiar so I searched his previous works but I haven't watch any. Then I realized he looks like Im Sungmin from age of youth.... or at least in this picture...

Choi Jo-Won would be perfect! They will definitely look good together

OMG, Kam Woo Sung! He has serious health problems (hyperthyroidism), that's why he seldom works, but he always delivers, so let's hope he confirms.
I read now that Kim Sun Ah was offered the main female part, while Park Si Yeon is up for another role?
In any case, I'm fine with both. Bring it in.

I was hoping for Kim Hyun-joo because she seems to work well with this writer, but Kim Sun-ah is great too! I am still bitter than she didn't get more recognitions for her stellar performance in Woman of Dignity, and all went to Kim Hee-sun (I like Kim Hee-sun, it's just Kim Sun-ah deserves more recognitions as well). Pretty sad for Park Shi-yeon, she deserves to be female lead too, hopefully her role is interesting enough in this drama.

Yes I'm a fan of Kim Hee-sun too, but Kim Suna deserved an award of her own in that show.

Either one of them would be great! Both in one drama would be even better. Park Si Yeon has improved a lot throughout her career.

Let's hope the ahjumma is closer in age. I mean c'mon, he can't keep being paired with at least 10 yrs younger actors.
What's Kim Si-Joo up to these days? ❤

Kim Sun-ah is rumoured for the role.

OMG.... Bae Yoo-Mi will have a new drama....! So happy. Loved her "Scandal: A Shocking and Wrongful Incident" and "I Have a Lover."
Please, lets have great cast - as in her other drama

would be glad to have him back in small tube. I liked him in comedy too. Such an effective actor he is.