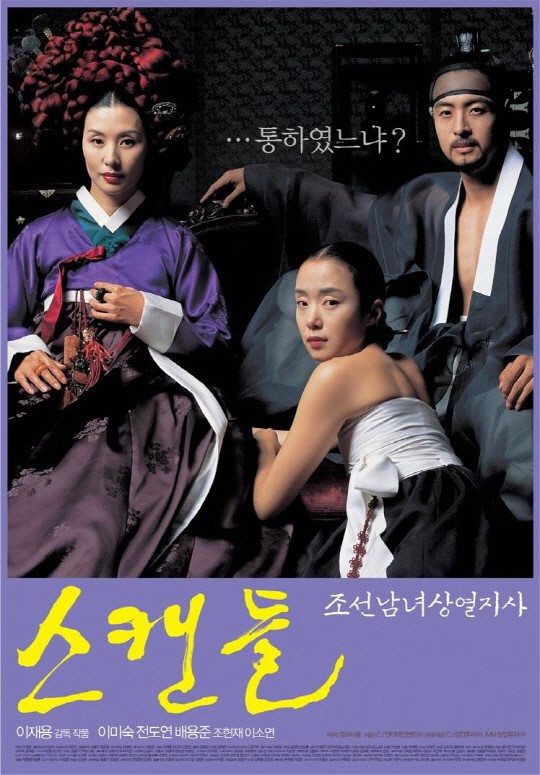 Let’s hope this remake sticks for MBC. The station is looking toward their early 2018 lineup, and one of the contenders is a remake of 2003’s romance sageuk film Untold Scandal (also known as Scandal: The Love Story of Men and Women in Joseon); the remake is tentatively titled Love Game, The Great Seduction. Man, that’s a mouthful. The original film starred Bae Yong-joon (Legend), Jeon Do-yeon (The Good Wife), and Lee Mi-sook (Temperature of Love), and was a hit when it came out more than a decade ago, but I was surprised to hear that a main broadcaster was considering its drama adaptation because of its racy subject matter.

Love Game will be an adaptation of the Korean novel that was the source material for Untold Scandal, which was in turn loosely based on the 18th-century French novel Les Liaisons dangereuses. The French story is one that’s been adapted numerous times, most recently in 2012’s Dangerous Liaisons starring Jang Dong-gun and Zhang Ziyi, set in 1930s China. (There was also 1988’s Dangerous Liaisons starring Glenn Close and Michelle Pfeiffer, and you might also recognize the story from the 1999 teen movie Cruel Intentions, which transplanted the characters into modern New York City as elite high schoolers.)

In Untold Scandal, Bae Yong-joon and Lee Mi-sook played a pair of twisted aristocratic cousins who engage in a bet: If he is able to seduce Jeon Do-yeon’s character, a young widow of great virtue, he will get to finally sleep with Lee Mi-sook, who has previously resisted his advances. Jeon Do-yeon proves largely immune to his womanizing charms, and the main conflict begins when Bae Yong-joon’s character starts falling for the virtuous widow and Lee Mi-sook gets jealous.

I’m interested to see how the drama adaptation will tone down the racier bits of the film, which contained some pretty explicit scenes, and I can’t imagine MBC getting away with anything beyond mildly risque in its primetime offering. As of today, Love Game doesn’t have a director or writer attached to the project yet, but is currently in the early casting phase, so we should hear some news about the show soon.

Love Game is being planned for 16 episodes and is tentatively scheduled to follow I’m Not a Robot in MBC’s Wednesday-Thursday slot, starting in January.

The plot sounds like it's copied from the "Cruel intentions" and adapated to the Joseon time.

Did you even read the whole thing above? They are both remakes of the original source material.

How did their necks survive the weight? That' what I would like to know.

There have been cases where some women actually snapped their necks (died) because of the weight of the wigs.

That doesn't surprise me. Heavy hair is no joke.

Yea or the asian head pieces sometimes dramas have. It's crazy how their head can upload that stuff.

OMG!!!! I can't stop laughing! I saw your comment and asked myself where are the braids then looked back in the photo and it got me so shocked! I didn't see it at first! HAHAHAHA! That's one of a hella braids. LMAO

"I was surprised to hear that a main broadcaster was considering its drama adaptation because of its racy subject matter."
Indeed but I'm glad because I'm more comfortable with a PG 13 version of it.

But I am also confused on how they are going to adapt it. It's interesting to see who will be the writer /PD, and who are going to be casted. It's hard to match up the level of original casts like Jeon Do-yeon and Lee Mi-sook, so hopefully they will cast solid actors. 16 epi sounds good for this kind plot.

Yes, a more mature actors who can do sageuks.

I wouldn't mind seeing Honey Lee in another sageuk. She was fantastic in "Rebel." That was the only sageuk that got into this year.

Honey Lee in another sageuk would be fantastic. Her terrific performance in Rebel was highly-praised, I'm expecting more awards coming for her. It would be great to see her in Lee Mi-sook's role. Too bad Jang-hyuk already attached to Money Flower, my wish to see him in another sageuk next year. Speaking of Money Flower, I really hope this drama is good especially with a line of great veterans like Jang-hyuk, Lee Mi-sook and Lee Soon-jae in this drama.

If this drama airs on MBC I don’t think the viewers can even expect a PG-13 version but more like a PG drama which I think will take away some of the more interesting parts/charm of the story. Not that I need a super explicit show or anything but sex, seduction, chastity, manipulation, jealousy, and love were huge themes in Untold Scandal and Cruel Intentions and I don’t know if a PG version with stolen kisses and heavy petting will match the the intensity and the stakes in the movies 🤷🏻‍♀️ I’m still excited though because I loved Cruel Intentions and also enjoyed Untold Scandal and only time will tell if this drama is good

The story is racy for primetime. So I am interested what they will do about that and how are they gonna fit the storyline to 16 episodes?
I really liked Cruel Intentions and have yet to see the other movies mentioned. Would be interested to see them adapt the story to modern Seoul and not sageuk like the film.

You should watch the 1988 version with Glenn Close and John Malkovich. Michelle Pfeiffer also had a big role. Uma Thurman and Keanu Reeves were in the cast too. It is still considered the best adaptation to date and Glenn Close is iconic. Also, I think sageuk would fit the theme of chastity better, making everything more scandalous, given the time period.

They should of put it on a cable station. I'd be interested in seeing what they'd do with something less racy than the movie, but racier than a broadcast network.

"Queen In-soo" (2011) was R-19 on JTBC and the netizens still complained about a bed scene between Eunjung (young In-soo) and Baek Sung-hyun (Crown Prince Uigyeong).

The more mature sageuks I've seen so far in a cable channel was "Eight Days" (2007) Channel CGV. One of my favorites on King Jeongjo.
The other one was "Yaksha" (2010) OCN. I wouldn't recommend it to anyone lol.

Maybe this is a drama for CGV. We might get racy and quality based on their short history.

They want to start in January and they don't have a writer yet !!????? Sounds like a recipe for a hasty mess of a story.

Or maybe drama writer Hyun-soo could forget about Good Soup not answering his calls, and toss another log on the fire in TEMPERATURE OF LOVE. ;-)

"MBC in talks" and they are so good at it lol. Dae Jang Geum 2 anyone?
I think they do it just to get people's reaction first. I won't be surprise if they'll end up putting this on hold.

The positive thing about MBC doing sageuk last minute is they already have a sageuk set and costume to reuse etc.

They also have a lot of sageuk writers that they might be able to get last minute.
Hwang Jin-young who is well versed in Korean history, especially the Joseon era.
Kim Yi-young (love Yi-san) but she needs to redeem herself from her last 2 sageuks. Same with Choi Wan-kyu who did well with "Sangdo" and pretty much went downhill with everything else.
Maybe Jang Young-cheol will regain his "Giant" magic.
Kim Woon-gyung (The Duo) etc etc...

I think tvN or jTBC will do it better, this drama need to rate 19+, MBC never did something 19+.

tvN makes more sense to me than MBC, especially as it aired HYENA (at 3AM!), which is one of the raciest Kdramas I've seen so far. (It was also very funny, and poignant, too. And had a great cast, in particular Oh Man-seok and Shin Sung-rok, who both sang.)

MBC did have a drama several years ago that was rated 19+. "Friend, Our Legend" with Hyun Bin. It aired late at night on weekends. However, MBC messed it up by censoring damn near anything related to violence or drugs. Blurring entire gang fights, tattoos, and soju bottles. Absolutely stupid and harmed what was otherwise a great drama IMO. I don't have much faith that MBC will do anything racy with this remake.

Channel CGV had a couple of dramas like "Girl K" with nudity and sexual content, but I don't think they produce dramas anymore.

CGV is more of a movie channel and I think that's why they were able to get away with more mature content on tv.
CGV did the drama version of "The Servant" (sageuk) after "Girl K" and that was the last I've heard of any CGV drama.

There is no way there is going to be anything close to racy with that timeslot.
I still want to see how they are going to make a PG story out of it lol.

LOL I think Lee Jun-ki's name is always comes first whenever there is news on the potential sageuk or any remake. I had his name on my mind as well when I read this news yesterday. Lee Jun-ki & Moon Chae-won would be great. Another moon -Moon Geun-young would be great as well.

Honestly, I'm in doubt about this remake, seems like it's going to be penned by new writer, which can be good or bad thing, because otherwise they might announced the PD +writer, along side this news.

LOL, of course because 1) he's great in sageuk and in any other genres for that matter and 2) he needs a good drama, stat! Moon Lovers was very popular but that drama was a mess and don't even remind me of Criminal Minds, such a waste of cast and talents. I agree with you, MCW or MGY would be great. Both are talented and both also need some luck when choosing a new project.

Considering that Jo Hyun-jae made his film debut in UNTOLD SCANDAL, maybe he could play the villain role in the drama remake. Now that would be interesting.

MBC will make it super tame I bet. I'll wait for the age range and image of the actors they cast to decide if I'll give it a try (they surely won't go beyond PG if they cast some fresh-faced rookie or idol)

Looooooved John Malkovich and Glenn Close in the 1988 vers. Will never not repeat their iconic "War!" scene. Acting clinic!

Crossing fingers for this drama vers. The 1988 movie was everything to me! Seems legit! I'm intrigued!

When you add in Valmont and several stage versions to the above I think I've probably seen about 8 different takes on this and Untold Scandal is arguably my favourite - the story transferred quite perfectly to the moral set-up in the period they used. I'd be disappointed if a TV version couldn't properly address the nuance because they have issues with it being racy - it'll be difficult enough to live up to the superb performances in the film.

There'll be more drama than the racier stuff, I bet.