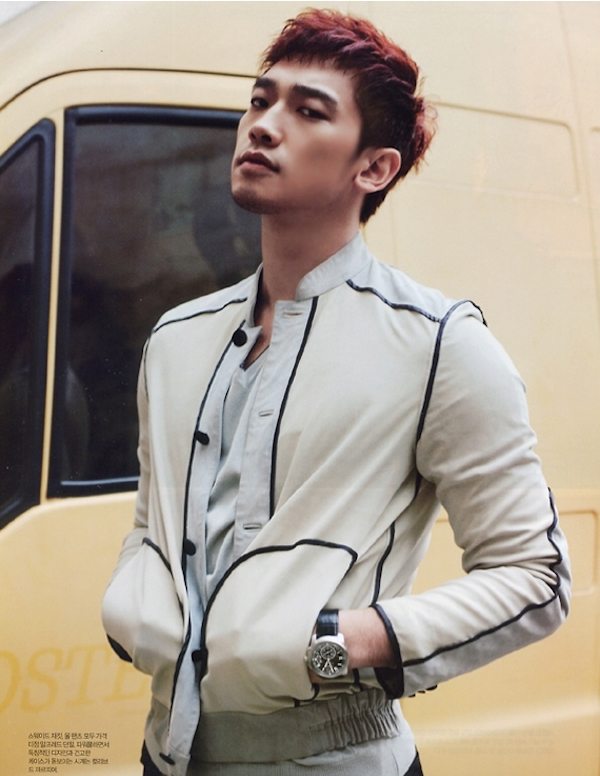 It’s been an eventful year for Rain (Come Back, Ajusshi), and it looks like he’s now back in nonstop working mode. Since his last album and drama, he’s gotten married, and recently welcomed the birth of his first child with actress Kim Tae-hee. According to Rain’s management agency, he has received the offer to star in JTBC’s upcoming drama Sketch, but hasn’t confirmed whether he will join.

He’s gearing up for his four-year music comeback since his last project, “Rain Effect,” coming out next month in a mini-album called “My Life Love.” Thus he’s been rather busy, and it’s undecided when he’ll finish reviewing the script for Sketch, which is an action-cop romance drama about people who are fighting to change the futures that have been decided for them. If he confirms, Rain will play the ace investigator in the violent crimes department.

Currently, he’s serving as a mentor in KBS’s The Unit, an idol reboot survival reality show, and he has been in and out of the recording studio for “My Life Love.” It’s a special album package for his dedicated fans, containing the music that allowed Rain to become the superstar he is today. Aww, thank you Rain.

He’s been a sentimental favorite of mine since Full House, but I must admit some of his most recent projects have felt lackluster to me. Especially She’s So Lovable (where he seemed to be only capable of an angry glare) was a disaster on all fronts. Hopefully with his new wife and baby to energize him, we’ll see the cuter, non-stone-faced Rain from years ago.

Sketch is tentatively scheduled to air on JTBC next year in March. If you want to see Rain sooner, his semibiographical film Uhm Bok-dong, about a national bicyclist, finished filming this past year and will be released in the near future.

Y'all. I love him. He was my first foray into Kdrama. Ninja Assassin came out right after my mom died and I don't know why but I found that movie so comforting! I do know why. It was Rain. My friends took me to see that movie in the theaters every day for like a month. And when it finally left the theaters I was looking up information on him and learned he was a singer and listened to all of his music obsessively and THEN I learned he was in Full House. I binged that entire drama in one day while eating nothing but ice cream in my pajamas. And yet I didn't start regularly watching dramas for another 6 years. Funny how life works. But, I love him. I love him lots.

Oh. I forgot to mention how FREAKING hot and gorgeous and HOT DAMN he looks in this pic. Dang, Rain.

The younger raizo is acted by Lee Joon, he's now starring in My Father Is Strange and also a boyband under Rain as their mentor, MBLAQ

definitely a favorite movie of mine. Ninja Assassin.

I have yet to meet a person who would describe having a new born baby as “energenzing.”

I've only seen him in 3 dramas and I've thought he has done a good job in all. Come Back, Ajusshi, Full House and A Love To Kill. But his plate sounds really full! Not only busy with music and TV but he has a new wife and child! He certainly would fit an action romance.

This project reminds me of Fugitive Plan B and I think that was Rain's best acting performance to date. He was sooooo good in that drama, everyone else paled in comparison.

I wasn't a fan of Come Back, Ahjusshi but I reaaaly want this to be awesome. And because it's a romance drama, I hope they get an awesome co star for him if he signs up. My vote is either Son Ye-jin or Ha Ji-won. But whoever is okay as long as they can act.

the drama sounds good!! i can't wait to see Rain in it!!!

Why does the premise of this new upcoming drama sound so much like "Minority Report" (starring Tom Cruise) to me? XD

I really missed Rain. And looking forward his new everything - the album, movie and drama... He is smazing! <3 And...yeah, he is sooo damn hot on this photo!

Rain was amazing in his last drama Come Back Ajusshi. I'm so looking forward to his new album, new drama and new movie!

Dude, I'm glad you said that. I was beginning to think I was the only Beanie alive who liked Come Back Ajusshi. That drama made me laugh and cry and cry and cry. Come on guys, what could be wrong with a drama that has a scene with Rain admiring his own abs and then taking a moment to peer intently down his pants and be impressed with whatever is going on in there? GUYS.

Yesssssssssssssssss! I miss my oppa on the TV screen! *pretends She's So Loveable doesn't exist*

He may not be my favourite, but I'll always have a soft spot for Rain. <3

I liked him best in A Love to Kill. I enjoyed him in Full House but I dropped Please Come Back Mister mostly because of his co-star's bad acting. I may reconsider it if we don't see him in a drama anytime soon because I am missing him.

Not hating or anything but this dude should spend time with his wife and child for the sake of his family!