Deals with demon kings and rascal monkeys in tvN’s Hwayugi 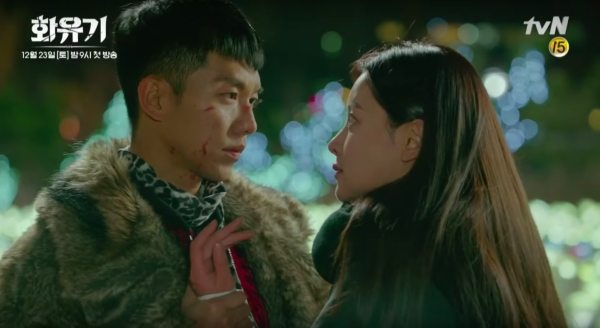 Only six days left to go!! I’ve been trying to keep my expectations down for this, but with this cast and the fantasy action premise, I have to admit that I’ve been counting down the days until Hwayugi’s premiere. I’ve been wanting a good rom-com to sink my teeth into as well, so hopefully leads Lee Seung-gi (You’re All Surrounded) and Oh Yeon-seo (My Sassy Girl) will give us a pairing to root for. By the looks of the extended teaser, they have the bickering chemistry down pat, which is always a good start.

The highlight teaser tvN has released for Hwayugi gives us some more background on how the leads first meet. Oh Yeon-seo’s character Jin Sun-mi (aka the monk character from Journey to the West), is a child when she encounters Sun Wukong (or Sohn Oh-gong, Koreanized), played by Lee Seung-gi, and Cha Seung-won’s (Hwajeong) Bull Demon King. Sohn Oh-gong doesn’t look any different from the present with his fur coat and haircut, but Cha Seung-won vaguely reminds me of Johnny Depp as Willy Wonka as he approaches baby Sun-mi for a “favor.” This favor seems to involve a certain fan that only Sun-mi can retrieve from inside a mountain, and the Bull Demon King cautions her that whatever she sees inside, she must act like she can’t.

The Bull Demon King isn’t the only demon she makes a trade with, though, and we can see her making a contract with Sohn Oh-gong, so that he will protect her from the ghosts she sees. He is supposed to come to her aid whenever she calls his name, but of course, wily rascal that he is, he finds a way around it by removing the memory of his name from her head. I love that he introduces himself to her as a “totally bad guy!” Hm, I do wonder, though, whether he has anything to do with the talisman-ed yellow umbrella she carries around with her. I also like how grown-up Sun-mi talks back at him when Oh-gong reappears in her life and offers another contract. She might’ve been a helpless, scared girl before, but she’s adjusted to her abilities, or curse, as we see her throwing red beans at a ghost, which hilariously works.

Yay, I’ve been dying to see Lee Hong-ki (Modern Farmer) and Lee El (Black) in character, as a top star (also the pig demon) and Cha Seung-won’s secretary, respectively. They’re both seen in the teaser accompanying the Bull Demon King to a clothes fitting, for the outfit he’ll wear to an important deal. Lee Hong-ki’s character has a bit of a mischievous side to him as well, though his boss has him on a tight leash, warning him to not covet what’s not his.

I’m glad that it looks like there’ll be plenty of comedy involved, since that’s really where the Hong sisters shine, from pop-culture parodies like the Superstar K-esque auditions where the Bull Demon King re-meets Sun-mi, to gags like where he tries to convince himself that the worn slippers he’s holding to his face smells like lotuses, since the monk is said to smell like the flower. I have a feeling the main couple is going to provide some good comedic fodder as well, even when the romance starts picking up steam. Sun-mi misinterprets Oh-gong’s order to “close your eyes” as a death sentence (lol), when what he really meant was for her to actually keep her eyes closed so he could appear in front of her with a bang.

This teaser has done nothing to help me tamp down my expectations, but I don’t think I even care anymore. With Lee Seung-gi back playing a bad-boy monkey demon, and Cha Seung-won in his suave suits and his Best Love‘s Dokko Jin-like demeanor, I’m totally raring to explore the world the Hong sisters have created this time. Hwayugi will premiere on tvN this Saturday, December 23. 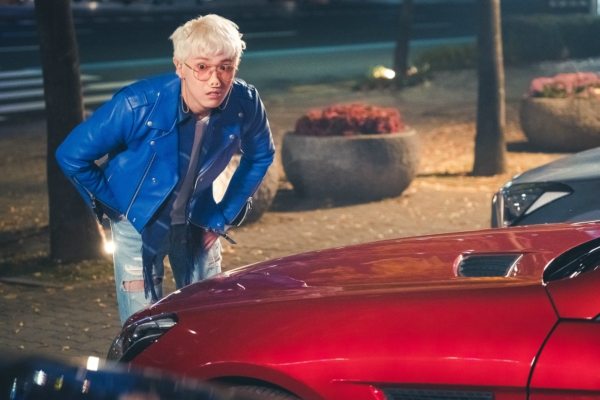 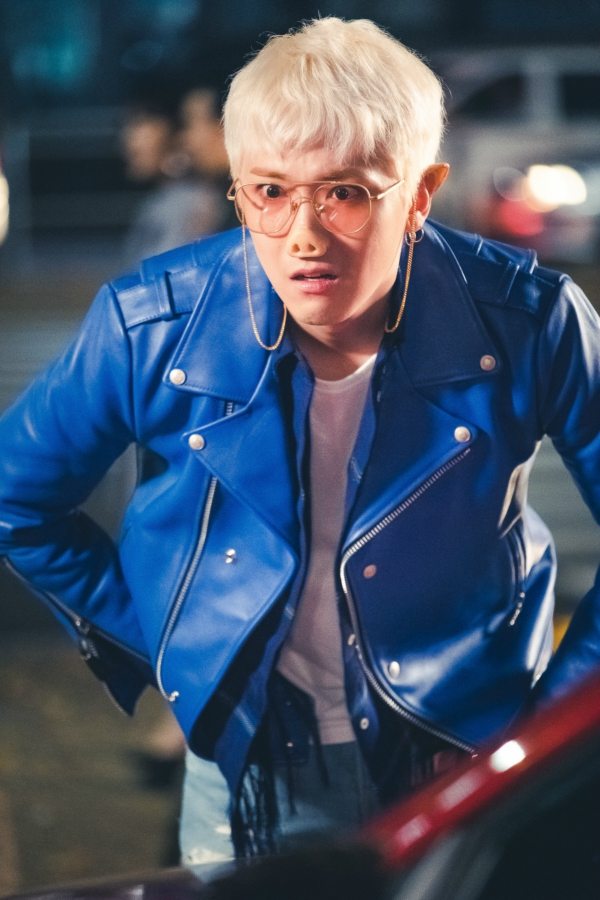 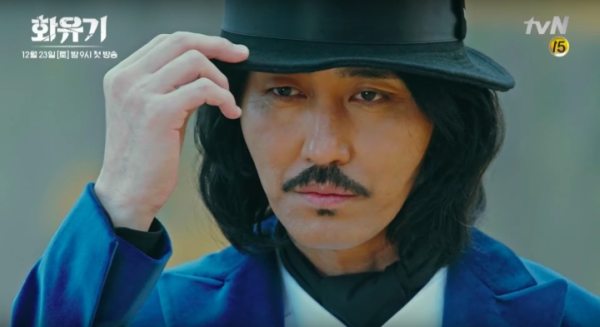 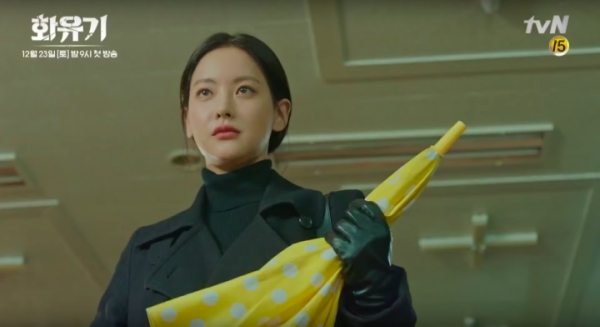 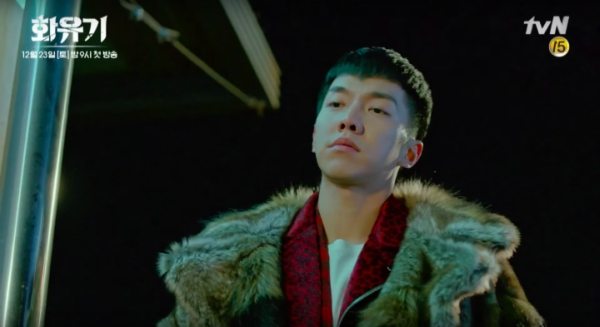 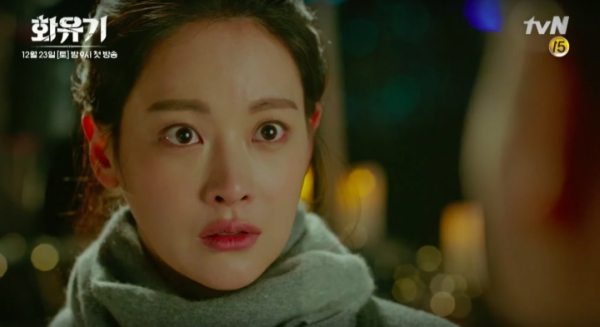 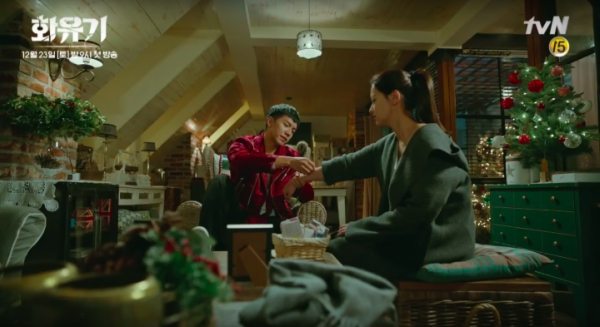 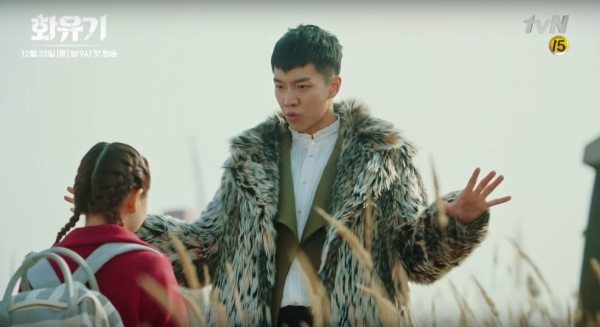 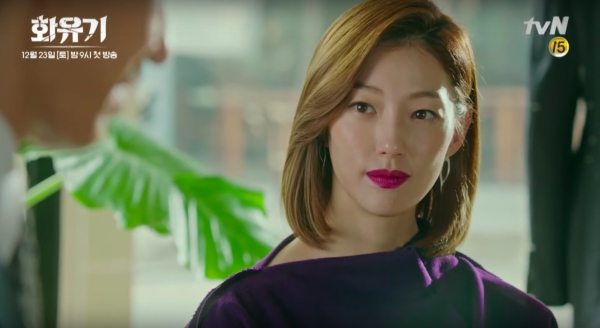 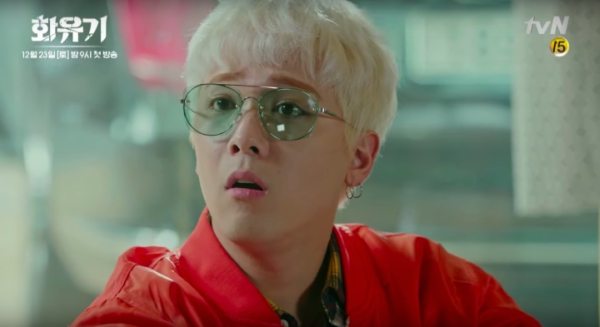 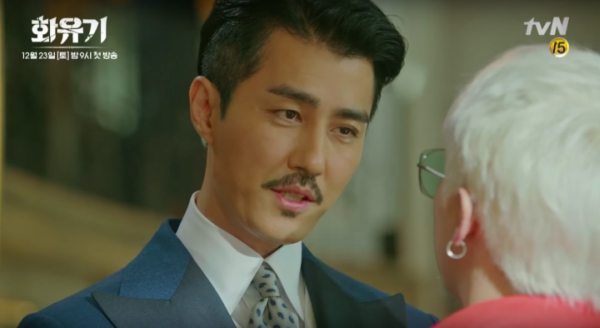 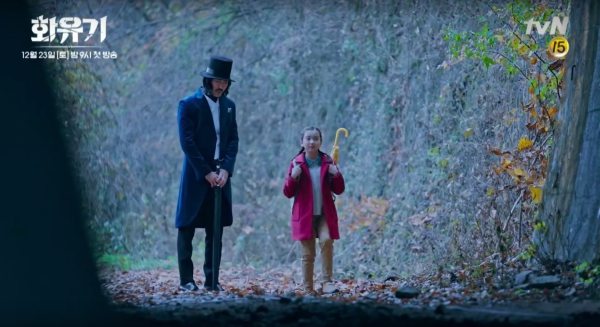 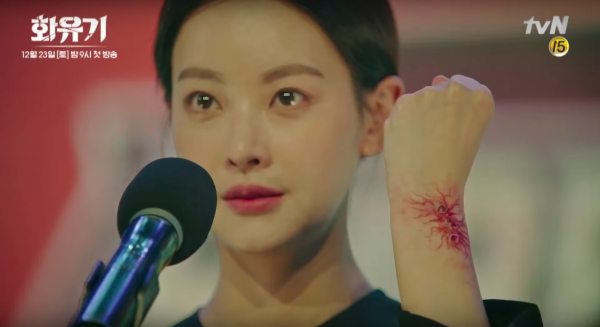 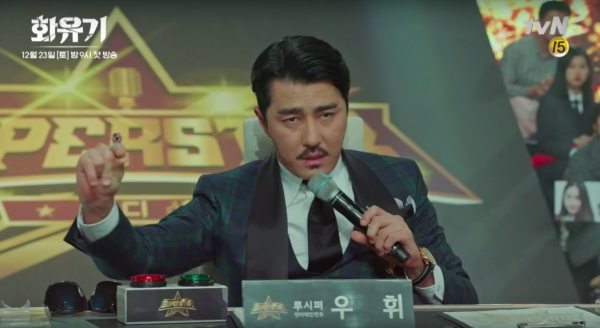 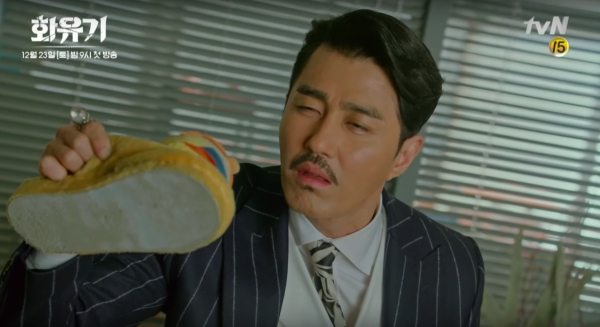 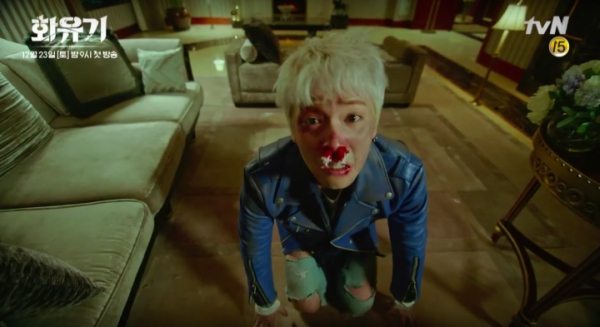 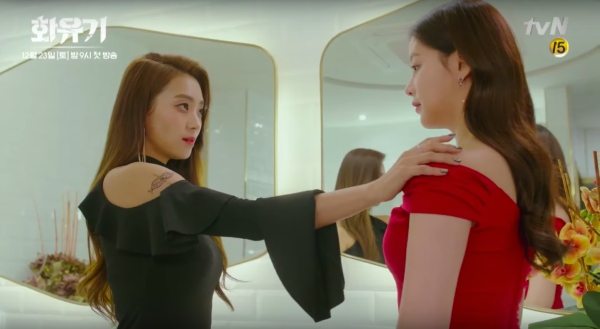 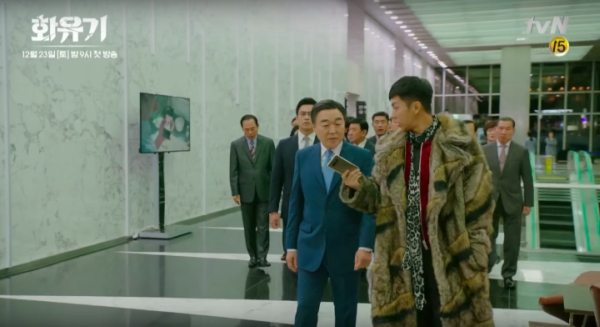 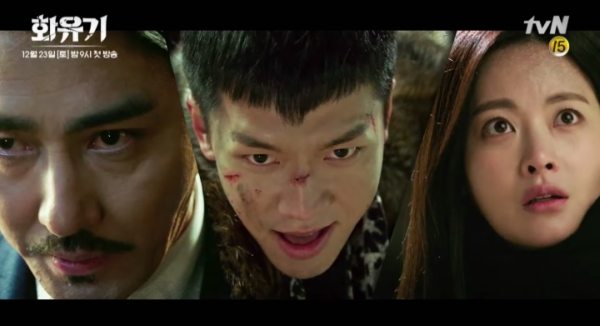 Is that Mayor Undies/Kim Sung-oh driving the car for Oh Yeon-seo? And the Pororo slippers! The amount of references in this teaser... @[email protected]

I will definitely be so thankful for the Dramabeans recaps to help me get all the wordplays and pop culture references Hong sisters will undoubtedly be throwing at us!

Pororo slippers, I hope the leads finds the Greatest Love ;) .

In Lee Seung Gi, Cha Seung Won, Oh Yeon Seo (I'm falling hard for her and this will be the first time I'm watching her, what's this magic?), Lee Hong Ki and Lee El I trust.
Am I the only one thinking the bracelet the bull demon king gave Sunmi is what made the monkey king unfatuated with her? I mean, it looks so sudden...

Curious if the breacelet is used to make him obey her as her "Servent" or something along he lines...It does looke exactly like the one the Monkey King Tiara uses(from what i saw over the years and NJTTW jaja)...Ah,it looked soooo good,i didn't realize how much i missed seeing Seung gi in a drama till it was in motion...

It is the same thing but the use seems different? Here, it makes him inlove with her it seems. Also, there's a script reading video when he tells her "if you can't handle this love, then take off this bracelet". If it's the case, I'm curious how he'd really fall for her. Hong sisters got my brain working when the drama hasn't even started!

This looked like a BLAST!!!I got the impression expression wise after she went into the tunnel that The Bull King doesn't like Sun-mi at all(or the reincarnation of the Monk)...It's intresting the young girl does a double contract with both of them,is that legal in fantasy land or contracts there work different?Do they even know?

Sounds to me like the fan is the one that our Monkey King uses,no?Courius if our Bad Guy Monkey kept tabs of Sun-mi all thsoe years keeping close eye on her even when he made it so she can't call him...If so,it won't ome so weird if along the lines he fall for her rather than in a sudden way....Cracked so much at the comedy aspect,from Cha Seung Won channeling his inner CEO passing her when he saw the mark(that voice jajja) to Seung Gi bad boy Hand on the wall and close your eyes jaja

Kal So Won (the child actress) in this! Last time I've seen her was in Glamorous Temptation she grew up, her and Shin Rin Ah are the child actress i recognize immediately.

Even if this show isn't that good, I'll force myself to like it. Thats how excited and desperate I am.

same. regardless of what happens, i'll be sticking til the end of the show.

Ugh, I've been trying to keep low expectations for this too, but with all the promotional material coming out my excitement just keeps growing. My first k-drama ever was You're Beautiful, and the Hong Sisters still have a very special place in my heart despite some of their missteps over the years. Fingers crossed this one is as good as it looks!

Me too!. Loved My Girl (which was hilarious), Master's Sun (still one of my favorites), My Girlfriend is a Gumiho (as a man I must shamefuly admit I kind of pet-zoned Ms. Shin Min Ah for her role as Gu Mi Ho, so I think of her as really cute but not as *hot* anymore) and Fantasy Couple (most people don't like Ms. Han Ye Seul's Na Sang Shil, but I loved her journey into humanity).

I loved these Hong Sister's Dramas, so Warm & Cozy almost felt like a betrayal. I truly hope they don't make the mistake to take us fans for granted again.

I would LOVE if Ms. Lee El's character would boss her boss, the Demon King. There was a running joke when we were young and followed Dragon Ball Z in which the most powerful being in DBZ's universe was not Goku but Chi-Chi since she could boss him like no one's business.

I also tried not to love/have expectations for this drama, but I'm pretty sure that flew out the window when the first pics of lee seung gi came out

"It's not possible to get any more excited than this" - is what I tell myself..and then, along comes another teaser/trailer...spiking it yet another notch higher!!
I have waited so long for Seung Gi to make a comeback...but these last few days seem so so much harder!!!
Please someone tell me that I won't have to wait for ever for the subs for this one, jebal!! I think I would burst from the frustration and unfairness of it all....

I see the umbrella in the must-always-be-yellow-in-a-kdrama color!

Lol. Was it you who posted about the yellow umbrella on the fan wall a while ago?

spoken in our best Yoda voice.

this one, the hype, strong is... watch it we must.

you know, Korean sentence structure used in English is pretty similar to how Yoda speaks?

Something is different with Lee Seung Gi. He is getting more handsome of course... but different. What is it? Is it his jawline? his cheek? Nose? Or the hair?
Ow... and I can't wait for this too.. just because Oh Yeon-seo. My ultimate girl crush! <3

Not gonna lie, I got so excited when I saw LSG pull out that magic staff thing from his ears

I am so excited for this! It's been a while since I watched a Korean drama that I was super interested in. I cannot wait for this to air next week--just in time for Christmas! :D

Getting excited for a Hong sisters show after a longggg time. Fingers crossed this is a good show. Please don't disappoint.

Holy macaroni the budget for this must've been massive. All the special effects + DAT WARDROBE. ALL OF THEIR WARDROBE.

But even without that I'm gonna watch this for that zombie girl.

I love Lee El! This show had better even slightly live up to the hype. Except for ‘Goblin’ and ‘Because this is my First Life’ it’s been rather a dry year for dramas. I want to have something to look forward to every week and this hasn’t exactly been the year for that. Have a Happy Holiday everyone!

Lee El is the most beautiful woman I’ve ever seen on television, hands down. And an amazing actress to boot!

Oh man, my hopes are getting so high now! I feel like kdramaland really needs a story like this. I really hope I won't be disappointed.

The teaser is intriguing! I'll definitely watch this drama :)