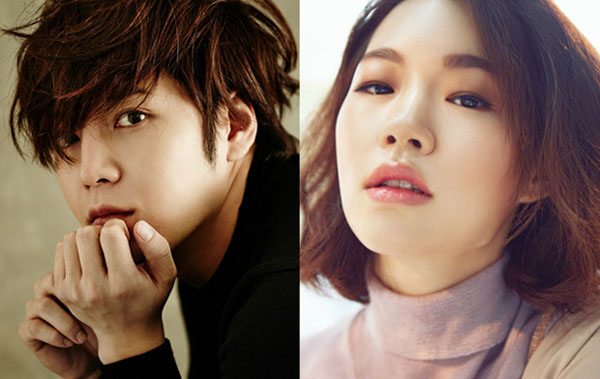 Confirmations are in for upcoming SBS show Switch: Change the World, with both Jang Geun-seok (Jackpot) and Han Ye-ri (Age of Youth 2) finalizing their castings with the drama. The project was previously announced as Operation King when Jang was first courted, but the title has now (ahem) switched.

This isn’t necessarily a pairing I’d reach for off the top of my head, but the odd-couple vibe is piquing my interest: Han Ye-ri always strikes me with her quiet strength and understated vibe, while Jang Geun-seok likes to do things with flair. Lots of it, with a ponytail on top! In this drama, Jang Geun-seok plays a con artist (heh) with the brains to pass the bar exam, although he was somehow unable to become a prosecutor. Because he’s as knowledgeable as a prosecutor but not actually a real one, he’s not bound by their rules and ethics and thus can navigate investigations more freely.

The drama describes itself as approaching justice from the line between legal and illegal, and also sends a satirical message. With that kind of character description driving the plot, I can already envision the clashing between the upright prosecutor and the faker who nevertheless seems to be working toward the same ultimate goal.

Switch: Change the World will be a Wednesday-Thursday drama following the current drama Return, and will premiere in March.

Yes for Ye Ri. Seem like many good casting news this year

So it's basically Suits?

I saw Korea was doing another time slip crime drama show as well - this time remaking the superb Life on Mars (UK original, not the ropey US remake).

Man, is this drama airing around the same time as the actual Korean remake of Suits?

Suits doesn't have the actual airing date yet, but they are planning to air it during the first half of this year. I think it will follow either Miracle We Met or Queen of Mystery, probably in April or May. This drama will start first in that case.

It's kind of sad that a Suits-like drama that was announced after k-Suits will air before it.

I saw that news abt mars on allkpop.. was waitg for confirmation

Jung Kyung-ho has already confirmed yesterday for the lead role in remake Life on Mars which will be aired in June.

This link was when he was still considering :

Missed this one...thought it was the remake of Mars (taiwan drama, jßdrama version was bad)...got me really excited. Then realised it is the remake of Life on Mars...lol

hehehe....when I saw the first post that's what I thought too.

I remember liking the US remake of Life on Mars. I'm hoping I will like this. How far back will the Korean one go? Hmm...

There is another remake of BBC drama- Mistresses also by OCN (Han Ga-in was offered the lead role) , aside from Life On Mars. Seems like we can expect more American remakes after this, especially by cable. It is probably has something to do with Hollywood investments in Korean drama during these recent years.

Mistresses was a UK show originally as well :)

Sounds a lot like Suits...no idea why they would go with something that is basically a copy of another k-drama. But then again...this one could have more creative freedom while the other one will follow the plot line of the US original?

Ooh, this sounds fun! I mean, it isn't like this hasn't been done before, but I think it can be done a little differently?

Haha that's SBS for you.

LOL, IKR? and with these cast. How can I resist? Honestly, I got a little bored with legal drama theme... But well if they can come up something more interesting aspect and idea. who knows?

Love Han Ye-ri. But legal drama and SBS is a no no for me, regardless of who is casted.

Now, a tvN and legal drama with Han Ye-Ri, that is something I will watch.

Yoon Sunbae as a prosecutor? I'm in. She is someone that I can watch in anything. I'm tired with legal drama, but if it is a good one or at least the plotline is intriguing like Return, I'll definitely watch. Glad that Age of Youth girls are getting more lead offers in drama, especially the underrated Han Ye-ri (she is at least doing well in chungmuro) and Park Eun-bin (the long overdue for her breakout after 20 years from her debut). However I do wish their first lead role after AOY is in a good project, which was not in Park Eun-bin's case. Hope it is better for Han Ye-ri.

I love Ye-ri! She is one of my favorite show stealer Indie darlings.

JGS one of my Oppa is back... and am one happy girl *dancing*
hope it turns to be a better drama which i would not drop Midway *fingers crossed*

Yes, and again he is not given a normal character! 😯
I bet he will also be an orphan or will have a horrible mother or father who will abandon him, either on purpose or by dying 😬

lol. thats what his track record proves to have disturbed childhood. and m just keeping fingers crossed whatever happened this drama should not disappoint me like Jackpot (my personal opinion). I really really want to watch him excitedly in a drama after a long time...

Never watched jackpot... not very fond of historical dramas, but that is mostly what you found in his other dramas... he he... we will see

I might be ready for another legal drama by March—taking a break from them otherwise. And JGS will definitely pour everything he has into the role which always impresses me. I hope it’s good!

This description kind of remind me of Japanese manga "Black Jack" except that was on medical setting. Would it be nice if it's also much like Black Jack that comes with a cute sidekick.

Tbh, I never thought of this pairing. And yawn...legal theme drama bored me.

Well this is interesting. I've given the last couple of Jang Geun-seok's dramas a try and it's been like 0 for 4 or 5. However, I've always found Han Ye-ri great in everything she's in.

Will this be the Jang Geun-seok drama that finally sticks .... or rather, that I stick around for? I'll certainly give it another sincere chance and find out.

Yes, I tried watching Jackpot. I've also tried watching Pretty Man, Love Rain, Mary Stayed Out All Night and You're Beautiful. I checked out a couple of episodes of each, but unfortunately things didn't work out and I ended up not watching.

I will certainly give this drama a look because all dramas deserve a chance.

all drama you mentioned i watched them all except Jackpot, its not what rang bell in my heart like others so i dropped afer 2 episodes. just hoping this one will stick around for a while with me...

Well, I just said that SBS end their legal trend in previous post.. Anyway, I expect Han Ye Ri's acting. Although Jang Geun Suk is a bit.. I never saw him before, and his style is a bit..

How do you know his style if you have never seen him?

Actually, I saw him in trailers, photos, or in Hwayugi, we can't call it "saw" since I don't have time to rating he, right?

He is the Olympic promotional ambassador. The government has probably delayed his enlistment until the end of the Paralympics.

Wow! This is so cool!! Jang Geun Seok is back!!!
I can't wait for this!
I even had fun with his cameo in Hwayugi, thinking it'll be a long time before his comback, but, here it is!

Ah, finally JGS! 'Would be. Ice to hear his voice again.

ah yes his speaking voice is so beautiful! and well his singing voice too of course! :D

JGS "con artist (heh)" my brain did the "heh" a nanosecond before I read it.

Jang Geun Suk has become one of my favorite actors

Yey!
Jang Keun Suk is back!
I am agree about the flair but no more ponytail! He cut it last week :)

Is this will be his last project before going to enlisting in the army?

Very happy he accepted,..whatever it is, sure Jang Keun Suk will give it his own unique swag..very much looking forward to it.

Please, is this a concern for you?

I thought legally they had until 35?

They do. But I can't think of an actor who waited until they're 35 to go into military service though. Actors and idols tend to between 28 and 30 (international age) and the rest of the male population tend to go between 18 and 22. It's harder - both physically and mentally- to do it when you get older.

I'm afraid JGS will start filming and then get the draft notice. I remembered Kim Nam Gil getting the draft notice many years ago and wasn't able to postpone. He was still filming Bad Guy and they had to cut the episodes, even use a body double in some scenes, and had a really WTF ending.

I think a law was passed last year that makes it pretty much impossible for actors/idols to delay enlistment. When you get that call, you've got to go. I'd rather go on my own terms.

He has been appointed the Olympic ambassador. Government cannot afford to send him to the military halfway through the Olympics.

He is the Olympic promotional ambassador. The government has probably delayed his enlistment until the end of the Paralympics.

Like both actors and the plot sounds really interesting. I'll be looking forward to this!

will each and every one of the age of youth girls star in a legal drama? 2 down, 4 to go

Why is Jang Geun Seok not yet signing up for the military?

If there's gonna be a Suits and a similar to Suits, I'm going to need a White Collar...please! Maybe even a Psych...

omg no psych!! That show is too sacred to me for them to ruin it

Same.
And, Psych is such an American show that not much would translate. They could probably get away with remaking The Mentalist (same premise minus clever cultural references and more serious...). Maybe mixing The Mentalist with the Hong Sisters and you could get something similar but not really Psych...

There is no team I would trust to pull that off. It just wouldn’t work.

It is true. The pop culture references are part of what make Psych so awesome. I agree. It would be awful....Hahaha

But can Jang Geun-suk still act in a drama this year? Wasn't last year his time to go to the army?

Another legal drama? SIGHHH. But I HAVE to watch it for JGS T_T. FINALLY, he's gonna be back on my screen. I don't think I've seen Han Ye Ri in anything yet.

Yes to Han Ye Ri! But not so keen about JGS.

Looking forward to this drama...hope it will do well with the ratings. JKS is a good actor, he just needs better projects that will suit his taste.

When will this drama (Switch: Change the World) be aired? Return halted filming and does not know when it will recommence filming 😞

Suddenly, courthouse/legal dramas popping up everywhere. I am still waiting for Suits.

So looking forward to this. Jang Geun-seok is one actor i highly admire for his talents and passion. Hope this drama is his comeback. I just wish it has some romance in it coz he surely can stir every woman’s heart. Wishing my #perfectstranger a break for good!