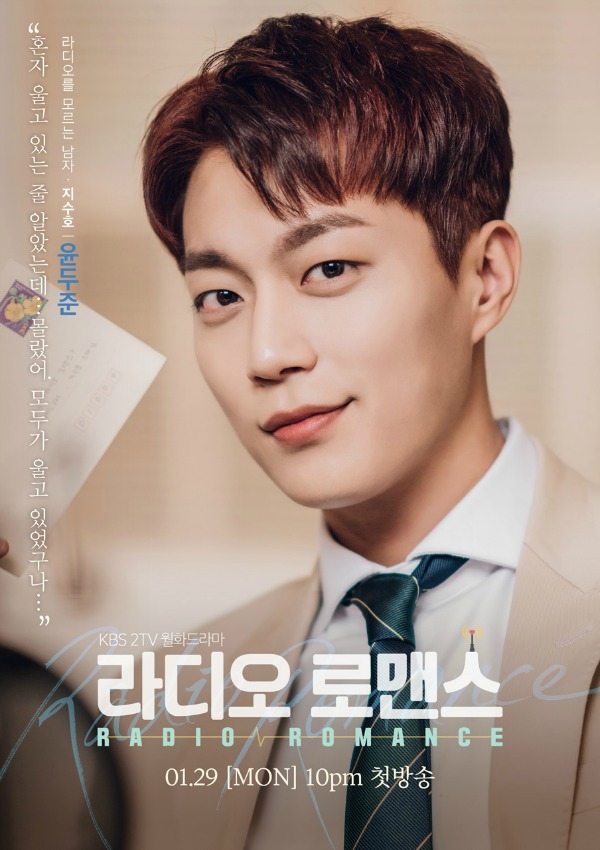 They’re certainly making this drama look very inviting; every bit of promo for KBS’s upcoming Radio Romance has looked bright, lovely, and romantic with a sentimental touch. They’ve also gone for the trickle-down promo approach, which I don’t love (don’t give me measly drops! Just lay it on me), but at least now we have a full set of character and promotional posters.

Up top is Yoon Doo-joon (Splish Splash Love) as our star who can’t speak a word on the air that isn’t scripted, Ji Su-ho. His poster describes him as “the man who doesn’t understand radio,” since it’s only through the heroine’s efforts that he even ends up as a DJ in the first place. His poster bears the line, “I thought [I] was crying alone, but I didn’t realize… that everybody was crying…” That sounds like the kind of sentiment you’d feel from a healing radio show, which is appropriate for our leading man.

Kim So-hyun (Ruler—Master of the Mask) adopts the time-honored tradition of putting writers into unruly perms; she plays Song Geu-rim, “the woman for whom radio is everything.” She’s the young assistant writer who somehow scouts the star to the station, and her poster tells us, “It’s as though you could hear it from heaven, if only the frequency is right.”

Yoon Park (The Package) plays “the man crazy about radio,” PD Lee Kang. He loves radio so much that his fervor can drive his employees crazy, and his poster says, “Befriending those who aren’t friendly with radio… isn’t that the job for people like us?”

Then there’s Girl’s Day idol Yura (After the Show Ends) playing Jin Tae-ri, “a woman who dreams of love.” Her poster says, “Excuse me, Mr. Idol. Smiling like that as you talk behind your sunbae’s back isn’t the manners of a hoobae.” Her character is technically an antagonist, but purportedly a lovable one; she’s a former star actress who’s attempting to make a comeback into the spotlight. 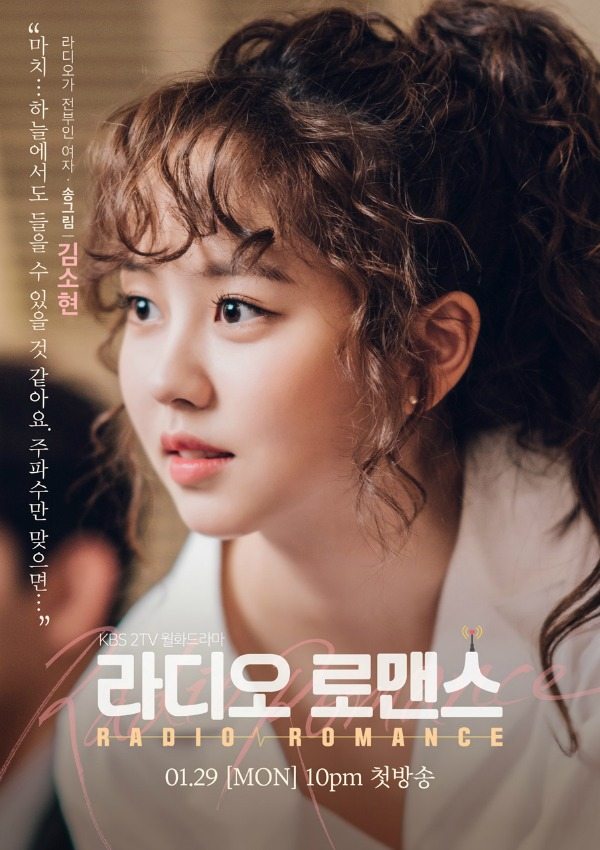 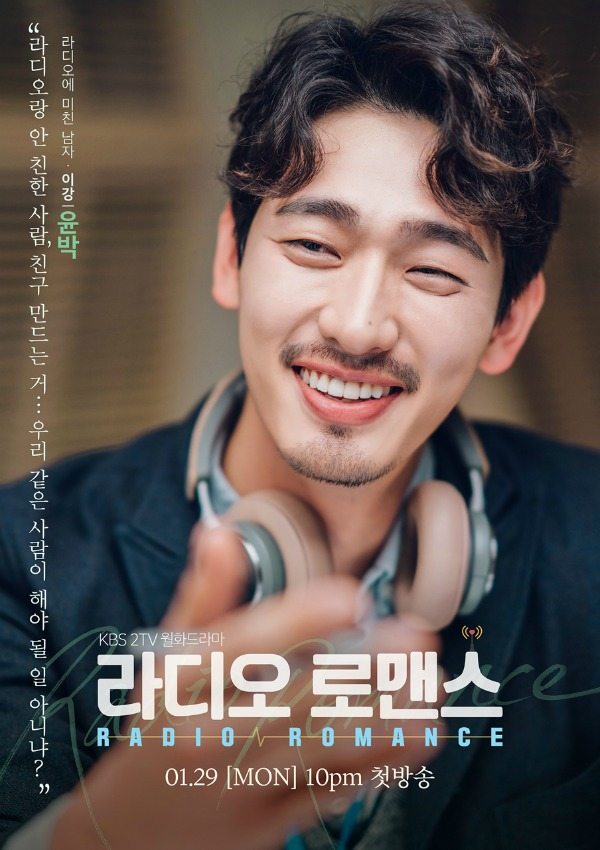 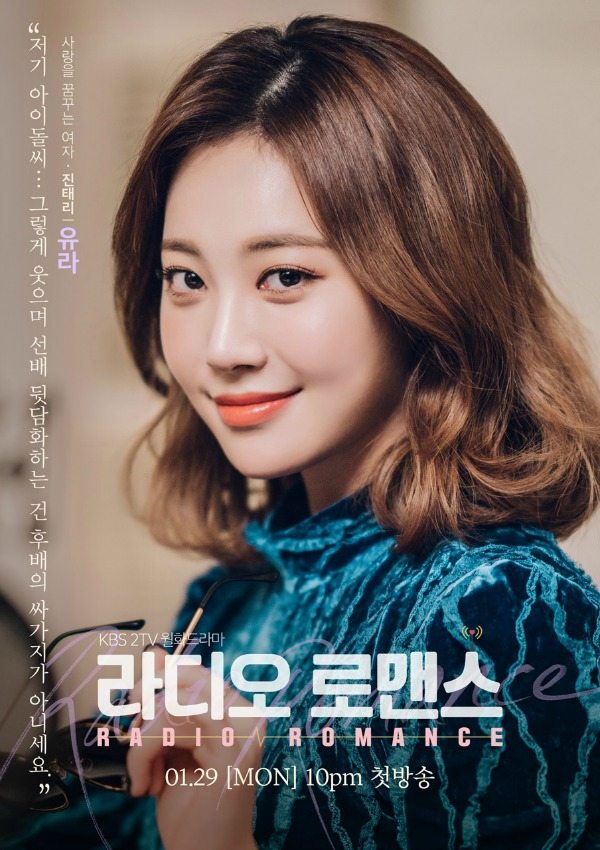 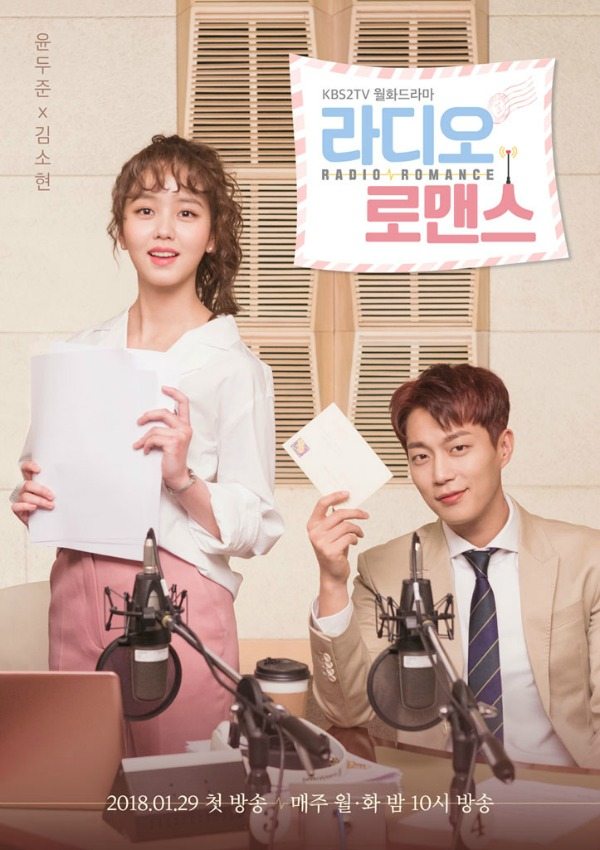 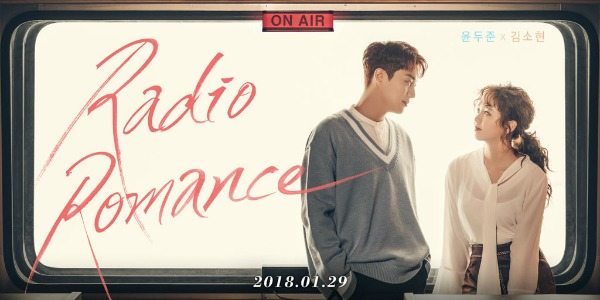 Aww the posters look beautiful!
Dear show, please be good! I am counting on you and Waikiki to brighten up my February! :)

I am really excited about Eulachacha Waikiki too!! Casts for both shows are just all 🌈🦄🍎🐶🍑🐱🍓🐰☀🐥🌼

She's too young to play a female lead... it is just too soon she should be enjoying being a teen star.

She's already been a female lead. The problem is that at her age she is in that transitional period, too old for child roles but at the same time has the acting chops to be a lead, it's just her age hasn't caught up with her abilities yet.

It's the same case with Kwak Dong-yeon in the drama who is playing Yoon Doo-joon's doctor friend. I don't know his character's age yet but he feels a bit too youthful for his character's description but I do not mean he should keep on playing teenagers. I'm happy that he is back on the small screen but at the same time, the role does not fit him.

I agree. It's not like she can just go do military service to wait out the in-between period, like Yoo Seung Ho.
And I'm sure she's tired of donning on the school uniform again to play a teen and Ruler already opened the door to her playing a leading female role in a non-teen drama. It'll be a little awkward for the next 2-3 years, and then after that she will be of a similar age to the younger set of actresses who take on leading roles.

Kim So-hyun’s poster is so pretty. ^^

It really is such a lovely picture! She's so fresh and beautiful looking.

PD Lee Kang already won me over and I already suffer SLS (which in my case so raree!) - I love you Do-joon but heart wants what it wants. LOL.

I haven't seen Yura in any big role I believe but she is hilarious in real life (based on what I saw in WGM) so not sure what to expect from her acting, but if she is an adorable antagonist, then it would be easy to love her.

Looking forward to see this drama. I'm also curious how Kim So-hyun's character will be in this drama. Just pray her character won't get sidelined again this time.

I like Yoon Doo-Joon very much.
Although Let's Eat was a disappointment (I really was so not in the mood for cliches) , he was great on it.

Kim So-hyun looks SO pretty in her poster, even with that hair!

I love Yura as an idol but have never seen her act, so I’m hoping she’s decent. I hate when idols I like do dramas and end up being terrible. Here’s hoping she takes after Minah in the acting department rather than Hyeri. 🤞

Indeed she z so pretty

I love kim so hyum, cant wait to watch her

Allow me to yet again, express my appreciation for Yoon Park's look - complete wtih facial hair *gasp* - in this drama. ^^

He looks sooooo good with that goatee!! I love guys who can pull off facial hair...I was mourning the loss when Kim Nam-gil shaved it off when he got the obligatory drama makeover in Live Up to Your Name!

Hehehe I am of the firm opinion that there needs to be more goatee in dramaland. :D

When I scrolled down to Yoon Park's poster picture, I thought it's Lee Je Hoon's character in his movie Anarchist from Colony 😂 they look similar

I love the cast so I'm really hoping I'd love the drama, too!

I love the cast and the promos looks great. I really hope this will be a sweet drama with likeable characters.

She is cute, but sooooooooooo young!!! Man, she looks like a 15 year old child.

Can you be my next obsession after Il Seung? 😉

Please make me looking forward to Monday, make me take hundred of screenshots, and listen to your OST on repeat..

Please make me fall in love with you, Drama (and make me participating more actively again in DB) 😆

Lol I would say the beard suits Lee Je Hoon, but he's Such A Good Actor, his looks just don't matter - I bought the crazy character in that movie. It needed a beard.

Eeks this was to be a reply to @kieru above.

Finally, Yoon Park is not a straight-laced villain second male lead! I gotta agree that the beard looks good on him. 💕
I believe that he can pull off the extra PD character well and I can't wait for his chemistry with Yoon Doo-joon 😁
I don't know but I feel like Yoon Park and Yura's characters are better-suited with each other since they are both written as outgoing and frank.

Now this is the concept I've been waiting for! The video teasers are just not for me, but these posters are certainly beautiful. Still not feeling Sohyun's hair, but her acting is going to make up for it, I'm sure of that!

ANYWAYS IS THAT YOON PARK HE LOOKS MIGHTY FINE

I think after splash splash love, it's hard to see Doo-joon with anyone other than Kim Seul-gi, I love the pair and honestly I think she would fit the role of the writer (I mean she can play adorable crazy like in Flower Boys Next Door).

It's not saying that I don't love Kim So-hyun. I adore the girl and she can act. It's just that she's a younger fresh face whereas Doo-joon has a older mature look that makes them appear as sibling sometime.

It doesn't say I won't give it a shot because who knows, they may win me over even if she's young (I mean when they announce her and Taecyeon in Hey Ghost, Let's Fight - the age difference was an issue for me as well but they won me over)

mmhhh....not sure. The poster with the 2 of them just underlines the age difference between the 2. She looks too young even with that horrible perm. I know she is an adult now but this transition period is just a pain plus she will probably always have that baby face.

Oh my, I've never really swooned over Yoon Park but, God Lord, does the man look good with facial ( this coming from one who doesn't fancy beards much and dislikes goatees even more)!!!

kim so hyun is so beautiful, and the perm is both awful and gorgeous.

but i am side-eyeing the age gap so hard. so. hard.