Hundred Million Stars From the Sky 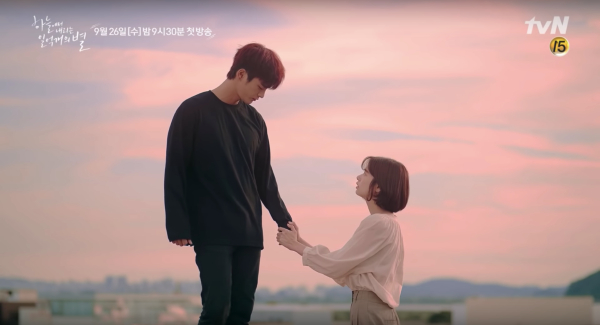 Oh the angst, it’s so palpable already! The Smile Has Left Your Eyes is a little under a month away from its premiere, and has recently released several character teasers to whet our appetites for the upcoming melo mystery drama. Though they’re all pretty short clips, I like what I see, especially Seo In-gook’s (Shopping King Louis) unreadable character, who straddles that line between misunderstood outsider and chilling psychopath with smirk-filled ease.

The first of the three character teasers focuses on Seo In-gook’s character Kim Mu-young, who mindlessly walks along the edge of a building, giving me secondhand heart palpitations in the process. Scenes of him with women flash across the screen, though he looks decidedly bored in their company, and he says as much offscreen. He asks someone what it feels like to kill someone as we get an ominous clip of blood pooling, and Park Sung-woong (Life on Mars) remarks that he gets a weird feeling about Mu-young.

Reaching the corner of the building, Mu-young closes his eyes as if he’s about to jump, but right then, Jung So-min (Because This Life Is Our First) grabs his hand and tells him not to do it. Mu-young gives a smirk as he says, “But what is it about you? You’re different. You go one step further.” Let’s just hope for her sake that it’s in the right direction.

In her character teaser, we see Jung So-min’s character Yoo Jin-kang running to reach Mu-young on the roof of the building. She says people may “call him a monster” but she knows he’s not, as we see the scene of her taking Mu-young’s hand from the previous teaser. Let’s hope Mu-young himself doesn’t break her of that belief, though I’m sure she’ll get plenty of grief from her detective older brother anyway.

Speaking of overprotective older brothers, Park Sung-woong’s character Yoo Jin-gook gets called a fool for his sister by his partner because he’s admiring a picture of Jin-kang on his phone. He doesn’t seem to mind the moniker, but does look a little alarmed when he zooms in on Mu-young sitting in the background in the photo. His encounters with Mu-young don’t seem to have left a good taste in his mouth, and I’m sure Mu-young’s question of how it feels to kill someone has Jin-gook’s detective senses all tingling. Jin-gook observes to someone offscreen, “When I see him, I feel strangely tense.”

The Smile Has Left Your Eyes is set to premiere in tvN’s Wednesday-Thursday slot on October 3, and will take over the currently airing Familiar Wife. 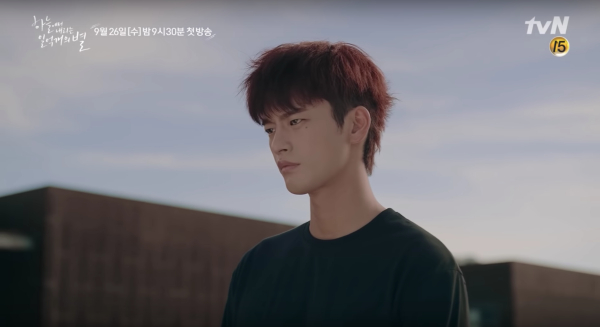 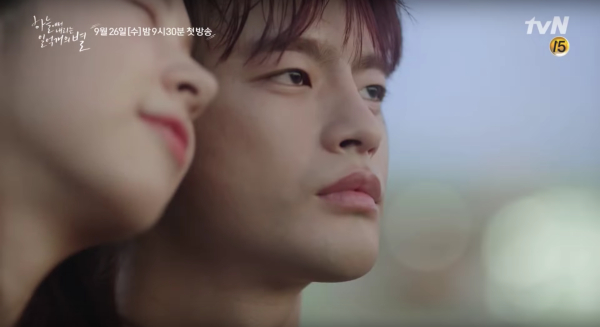 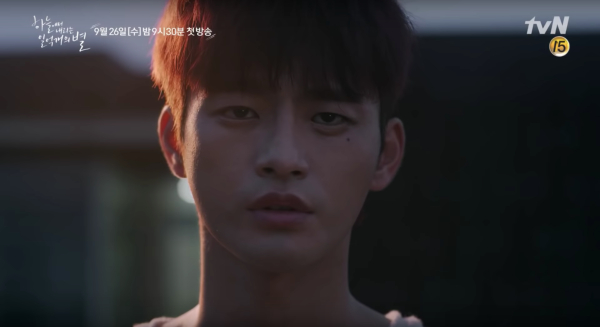 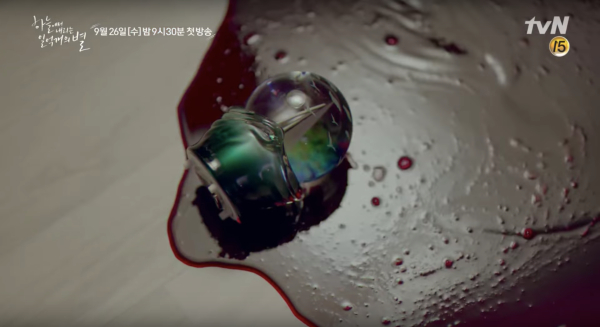 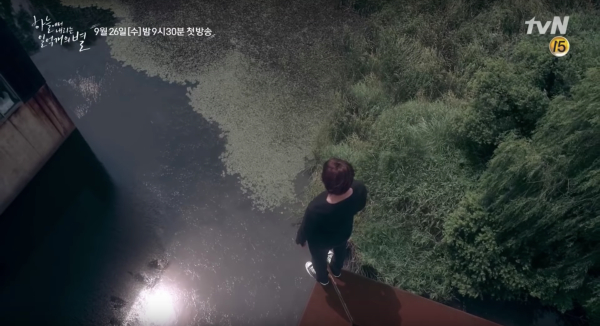 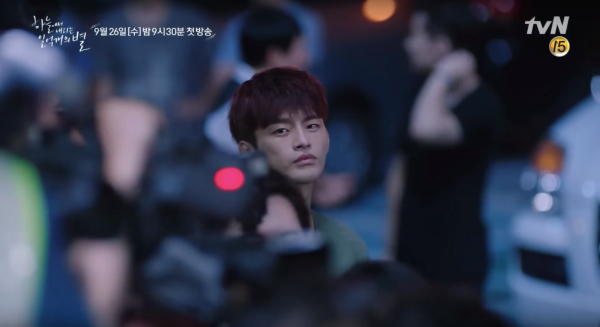 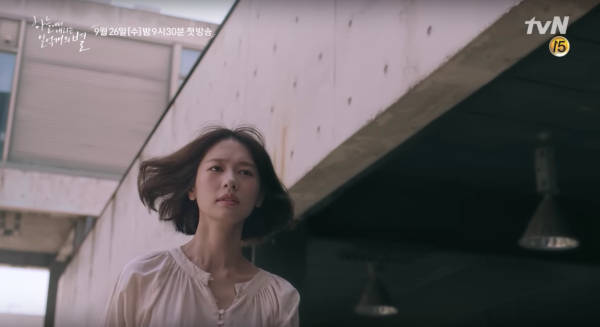 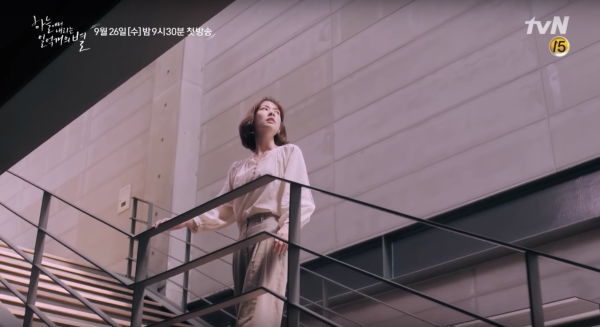 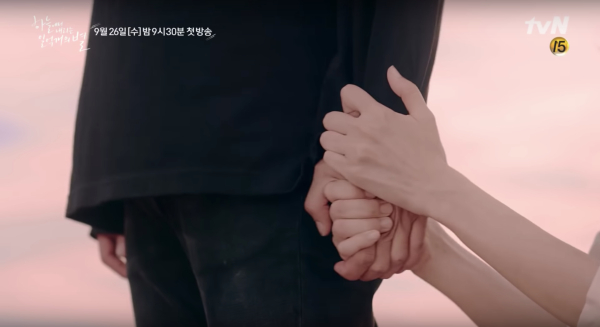 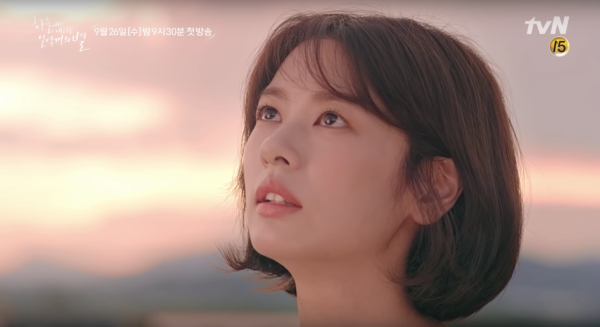 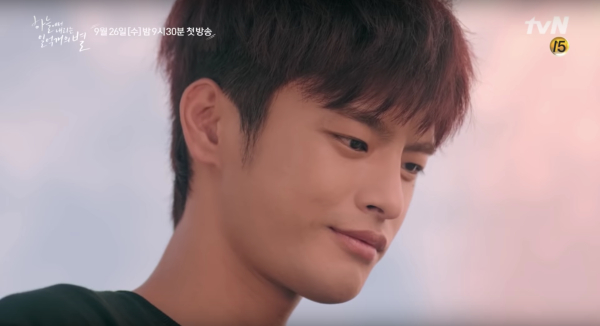 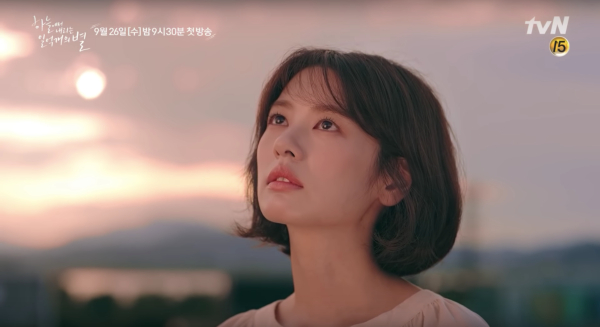 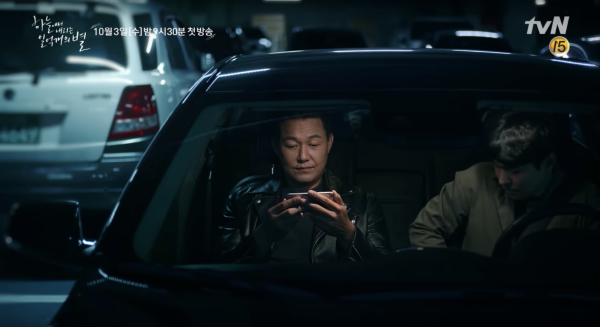 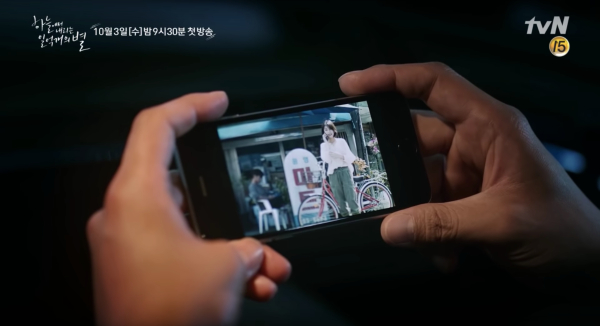 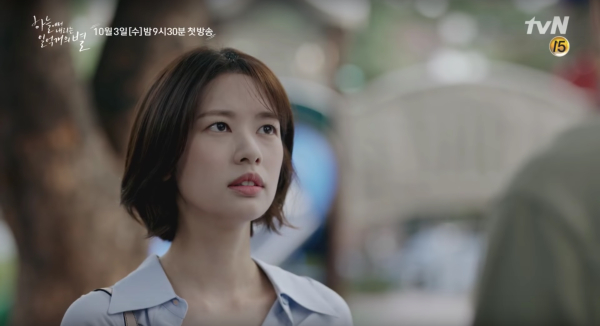 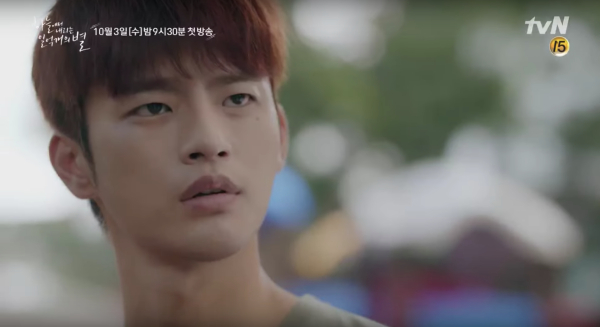 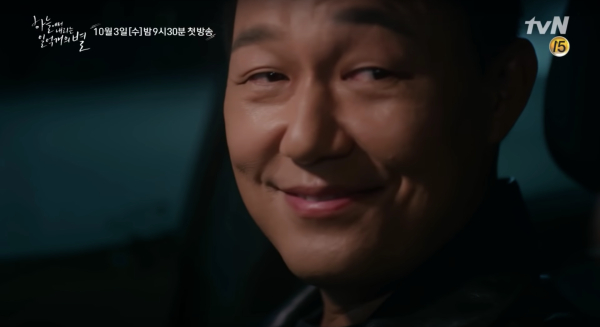 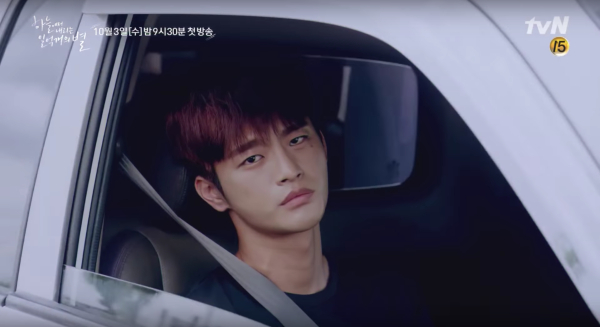 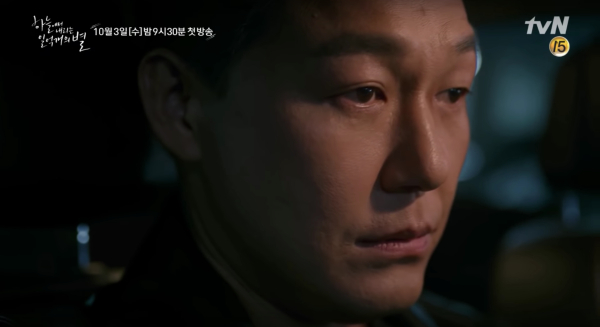 Why is September-October bringing out shows with great leads? I feel like I will end up watching all the upcoming dramas...

All I can say is I'm ready for the angst! Bring it on, show!

Dont let me down. Make me cry. A good cry.

I'm here for the tears and despair !

This looks wonderfully angsty. My newfound love for Park Sung-woong after Life on Mars def makes me more excited about this show. Can't wait!

Thanks for the update @tipsymocha

That smirk on SIG's face, at someone who just tried to save him, is pretty chilling. I'm interested for the psychopathic references and to watch the chemistry between these 3 leads.

Oh my this looks good! I like all three leads as well. Will pencil in this Weds Thurs drama for October.

Ugh, so torn about this drama. On the one hand, I've heard non-spoiler-y-but-bad things about the original's ending, which puts me off the project entirely. Nothing ruins a story for me more than a bad ending.

I mean, I say 'Seo In-gook' not just as a fangirl (which I am), but because he has such good taste in his projects. There isn't a single movie/drama I've seen him feature in that I haven't liked if not loved.

So one part of me is thinking 'SIG has good taste. This is a remake. They probably made the ending better.' While the other louder, easily-devastated part of me keeps shrieking 'BUT WHAT IF THEY DIDN'T?!'

Will probably end up waiting until it's done broadcasting and binge-watch if it has a good ending, tbh. Doesn't mean I won't be tempted to live-watch, of course, but I have a sensitive heart. Girl's gotta protect her feels.

I watched the Japanese. I think the hero deserved the “bad ending” for the crimes he did

@fishnchips
Thanks for the info about the original. I find that I'm not put off by a possible ending, in this case. I would define a bad ending as one in which the denouement was unrelated to the plot and characterisation, and therefore did not make sense. If the show had given enough pointers and clues to helping the audience guess that one logical conclusion is a 'bad' one, then it is not exactly bad.

Thus I could accept without much regret, the ending of Goblin and 49 Days, and even applaud the show for sticking to their guns towards the 'logical' end. That's not to say, that I wouldn't have been happy if the endings had been happy/happier, but a sad ending alone, will not stop me from watching. 😉

That's a very good point! I definitely agree that just because an ending is sad, it doesn't mean that it's objectively bad.

That said, unfortunately, my squishy heart cannot be so logical lol. I stay away from sad endings in dramas like someone with hay fever would stay away from a flower store. X'D

Personally, I would not say the ending was bad at all. I'm sure the some of the ones who do were probably rooting for a certain chain of progress. It's more shocking.

Thanks for the input! Lol, see the problem is I always try to keep myself as uninformed as possible about a drama I plan to watch, so I have literally no idea about the plot progression or what exactly people found bad about the ending. My only spoiler regarding the ending, alas, was actually from a random comment here on dramabeans while the adaption was still just news. So now I'm stuck in weary-mode lol.

There isn't a single movie/drama I've seen him feature in that I haven't liked if not loved.

So you've seen The King's Face? If yes, is it good? I'm not a fan of sageuk, unless it's in light fun genre, but I'm curious about this one because...SIG.

I personally loved The King’s Face. But I do warn that it is seriously depressing and not romantic at all. If you start watching, don’t root for the lead — it won’t be hard since the plot keeps pulling them separate ways.

seriously depressing and not romantic at all
Ah I see, as expected from sageuk. Thanks for the input.

Alas, I've only liked everything I've seen him in, not seen everything he's been in lol. I stayed away from The King's Face from the beginning since it seemed promoted as more like a 'plunge into the depths of darkness' kinda thing, whereas I'm more of a 'we can go through the dark tunnel if there's cotton candy at the end' kinda girl.

'we can go through the dark tunnel if there's cotton candy at the end'
Same, hee~

The more I see the teasers, the more I'm scared I'm not going to be able to watch! I Remember You is about as far as I can go on the dark side before the nightmares start.

On another note, hey, @tipsymocha, you seem like you would be a good candidate for senior editor of DB. How about it? Take a vacation from the law for a few years, have some drama fun!

Seriously, you have no idea how tempted I was.

And then I remembered that I have loans...

Ahh that smirk! Makes me scared and excited about what this show is gonna do!

SIG is finally getting to do the negative role he always wanted to do and if teasers are anything to go by, he is already doing a good job!

I am guessing we won't get much of a comedic relief here cuz this seems like an intensity heavy show but I don't care, I am going in ready to face whatever the show doles out!

Yeah. He finally gets his wish! I was expecting him to land it as a movie role. I’m just excited to see how he will portray it. Lucky for us it’s 8x the length of a movie to watch him slay it.✌🏻

I am a bit scared, knowing his ability to live the character. I mean he already "WAS" on the script reading. won´t read above comments about original ending. please people, don´t spoil, is there no spoiler tag anymore?

Man, I knowwwww! SO many spoilers in all articles related with this show! And I know what you mean! He becomes the character! I remember Jang Nara saying she thought Seo In Guk was rude when she first met him but he was just being Lee Hyun. And Eun Ji has also talked abt how he only spoke satoori on the sets of AM97. He was Yoon Jae!

I'm so good at not reading spoilers since I've been lazy to read stuff. Looking forward to this since apparently I'm a SIG fan according to your post last time. :)

Lol yeah! You don't know it but you are a Gukkie fan! The show however might be a lil too dark for your taste but I am gonna be waiting for unni to watch it 😊

YAS! I love the pairing and I think both the leads will shine through. I plan on being spoiler free and wouldn't even go near the Japanese version. Or should I?

It will probably be difficult to shield yourself from spoilers. It’s even written into the news.

I am a master of selective hearing. Can you become a selective reader? Is that even a thing? LOL

Just watch it after if you can. It's great but lets say not something you might want to go through a second time. Unless your me. LOL. But admittedly, it's been years since I watched the original so I am almost certain I am possibly ready. Don't read anything!

So many dramas I want to watch !

14 The smile is now in SIG__ cant leave his eyes

Honestly,i can feel the angst and the chemistry between these two already. This is the first series since the beginning of this year that i am looking forward to. Hopefully its going to be my drama crack for this year.

Can I just say I love Jung So-min’s hair in this? It lends a softness to this hard, angst-filled show.

Can I bear to watch? Still not sure.

ugh wth seo in gook just gets better with age doesn't he?!