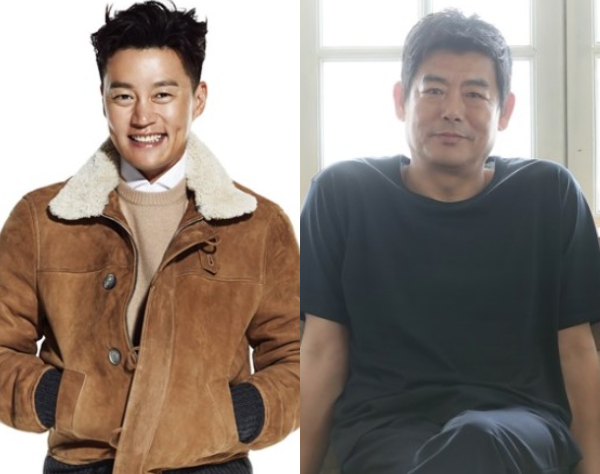 Well played OCN, I’d watch anything with these two actors. The cable channel is busy preparing for its upcoming action thriller, titled Trap, and has recently cast Lee Seo-jin (Grandpas Over Flowers, Marriage Contract) and Sung Dong-il (Your Honor) to headline. I absolutely love both actors, though I’m admittedly more familiar with Lee Seo-jin’s variety persona, so I’m really looking forward to seeing them play off each other in what sounds like an exciting drama.

The character Lee Seo-jin will play is that of an anchorman who is beloved by the entire nation: Voted as the most trusted media personality for years on end, with a loving and stable family, and regular solicitations to join politics, Lee Seo-jin’s character appears to have it all at the beginning of the show. However, while on vacation with his family, he encounters a tragic, life-changing event and falls into a mysterious trap.

Sung Dong-il, on the other hand, will be continuing his latest string of roles within the justice system, this time as a veteran detective with uncanny instincts. Assigned to Lee Seo-jin’s case, the determined detective will start to uncover the shocking and unexpected truth behind the case. Though my favorite Sung Dong-il roles involve a little comedy, I can easily imagine him playing a hardened veteran detective as well, who could be a formidable foe or ally to Lee Seo-jin’s fugitive.

Trap is actually OCN’s first show under their umbrella “Dramatic Cinema” project that they’re launching in the new year, which is essentially bringing together drama and film talent to make cinema-quality dramas. To that end, director Park Shin-woo, best known for his 2009 thriller Into the White Night, will be in the director’s chair, while Nam Sang-wook, who wrote Special Affairs Team TEN, will pen the script. Taking on a producer role is director Lee Jae-gyu, who has a pretty impressive list of credits in both dramaland and Chungmuro, including Fatal Encounter, Beethoven Virus, and Damo. I feel like OCN dramas in general are very well-produced, so I’m interested to see if there’s a noticeable difference in quality with these dramas.

I'll definitely give this a try. Love Lee Seo-jin. Love Sung Dong-il. And I'm hoping it's well written. It's odd. If you asked me what genre was my favorite, I'd probably say I like rom coms the best, but my two of my favorite shows of all time were thrillers. (2 weeks, signal) I watched those two as they were broadcast. If I like a show enough to wait a week for an episode, it's got me hooked.)

It’s not that hard to trap Seo-jin. Just get a couple of traveling grandpas. Na PD does it every couple of years or so.

Occasionally they throw Choi Jiwoo at him too. He sulks about it and gets over it after a while

Throw in Eric's cooking and no chasing is required.

Hahaha! Love him in 3 Meals a day and Youn's Kitchen.

I'm still sad that they didn't end up together in real life. When marriage news of Choi Jiwoo was first announced, I was so happy for her & heartbroken for Seojinnie at the same time, lol. I really loved their chemistry.

Joining you! The combo sounds epic along with the writer and new format

4 gadis | Waiting for the next Playlist 🏥🎶

Oh yeah! So many interesting casting news recently. I like both actors and the writer. And it's nice to see Lee Seo-jin venturing into different genre.

Sung Dong-il is kind of being wasted in Your Honor right now, so I'd love to see him in a leading role.

Agreed. I dont see him much in the YH and i dont know the significance of his character yet.

Spirit guide, I imagine? It seems like he's only around to offer Kang-ho advice that moves the plot along...

Wait, he's in Your Honor too? He was just a senior judge in Miss Hammurabi. Wow! He's into his 3rd drama this year. Ahjussi is such a hardworker :) I love him!

He is so great - that's why I'm sad he's not more prominent in Your Honor! That's a lot of talent being sidelined!

While the cast sounds great, I am more excited about TEN writer. I am still waiting for the 3rd season.

Interesting that this writer has only two credits listed (as screenwriter) on AsianWiki. It lists SPECIAL AFFAIRS TEAM TEN (OCN/2011-2012) and TRAP (OCN/2019).
I am looking forward to the upcoming TRAP but like you I would love to see TEN 3.
Taking a quick look at their recent work of the 4 main characters only Jo An (Jo Kyung-jin) seems to have withdrawn from performing over the last few years. I am hoping for some kdrama magic that will bring the 4 back together,
Sidebar: Choi Woo-sik is still in his twenties (28).

Well, the hope is dying as the years goes by and by the fact that Jo An is not active. And even though Joo Sang Wook have been in many dramas that I watched, i will alwayds remember him in this drama. I also forgot that this drama is where I first saw Choi Woo Shik. Lol.

Totally watching this one. Seojinnie!

i love them both also and i found out that thrillers are kind of ok to watch even for a scared cat like me! ghost detective has me on the edge of my seat sometimes but i could stare at his cheekbones all day and swoon and the guest is just over the top enough for me to not buy into all the scare cause i can talk myself into not believing it but just watch for the actors. voice 2 has me in the corner with all the lights on too but i love the actors and i loved season one so i am in it too. here's to all the actors that make it worth watching them. however Kwon Yool has me hating him cause he is just too good at being bad

I can’t wait for this drama! Love both actors! I wonder which actress(es) would be cast next.

The lead actress will be Im Hwa Young.

Just like what I said on my fanwall post, I love this pairing of ajusshi actors! I'm not sure what to feel about the film-drama format but Ten's writer gives me hope!