Accepting the unexplainable in tvN’s Mama Fairy and the Woodcutter 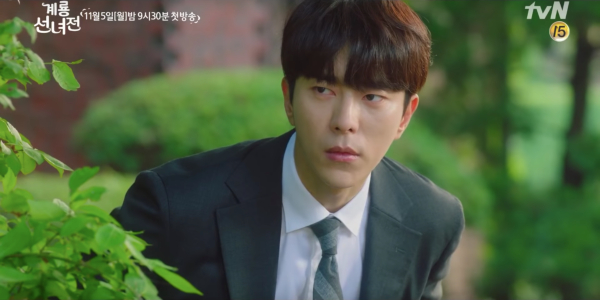 This show looks like such a welcome dose of sunshine and quirky rainbows, so I’m excited to realize that its premiere date is just about a week away. Fantasy rom-com Mama Fairy and the Woodcutter has released several more teasers in anticipation of its run, giving us a further glimpse of a barista fairy with multiple outer appearances, who has waited for 699 years on a mountain for her husband to be reincarnated.

Said fairy, Sun Ok-nam, will be played by Moon Chae-won (Criminal Minds) and Go Du-shim (My Ajusshi), and whose appearance changes depending on who is looking at her. The first of the newly released trailers focuses on her younger self, whom we see sitting on top of the mountain and wandering the streets in her flowery hanbok, narrating offscreen that as a fairy without her winged clothes, “I have been waiting for the day he becomes reincarnated.” In a nod to its folktale source material, we see Moon Chae-won as Ok-nam begin bathing in a stream, when Yoon Hyun-min (Witch’s Court) and Seo Ji-hoon (Misty) get caught watching, though both vehemently deny spying on her. Next thing we know, Ok-nam makes her way to the city in search of the two men, one of whom she is convinced is her reincarnated husband.

The next teaser starts with Yoon Hyun-min’s character, Jung Yi-hyun, declaring himself the ultimate follower of cold rationality and logic. After coming across the coffee shop in the middle of Mt. Gyeryong, though, recent “unexplainable” events have kept cropping up, not least of which is the strange barista grandmother with a flower in her hair who keeps changing into a young woman in front of his eyes. Seo Ji-hoon’s character, Kim Geum, is distinctly less bothered and much more smitten by Ok-nam, and he takes to calling her fairy-nim, even in the face of Yi-hyun’s ridicule.

Kim Geum seems much more receptive to fantastical things, generally, since he casually has a conversation on a bench with Ok-nam’s cat daughter to figure out what she likes to eat. Yi-hyun, though, seems almost offended by Ok-nam’s ways, including her tendency to speak with plants, and demands that she stop telling people that she’s a fairy. Ok-nam readily agrees to stop, saying that she will follow “her husband’s” wishes, and walks away as Yi-hyun hilariously flips out that she called him her husband.

Mama Fairy and the Woodcutter will premiere on November 5th, taking over tvN’s Monday-Tuesday slot from 100 Days My Prince. 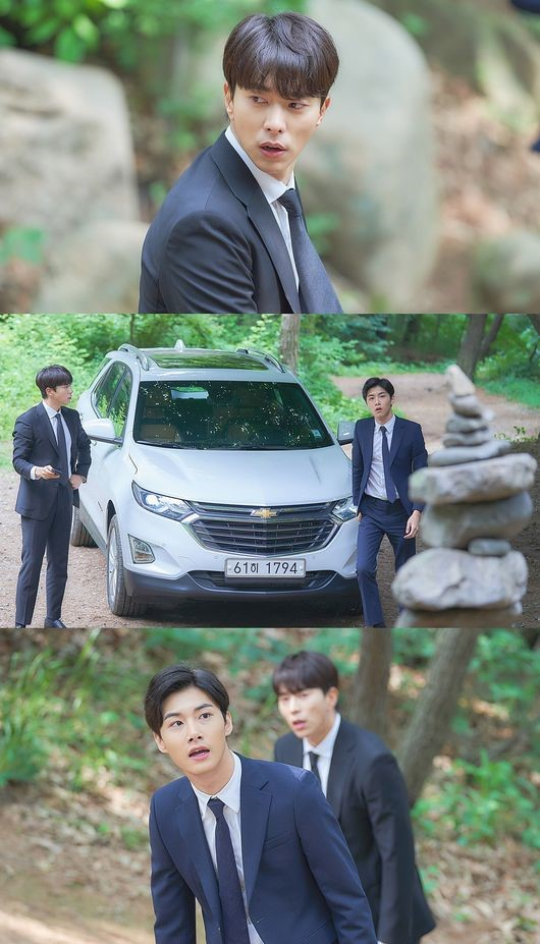 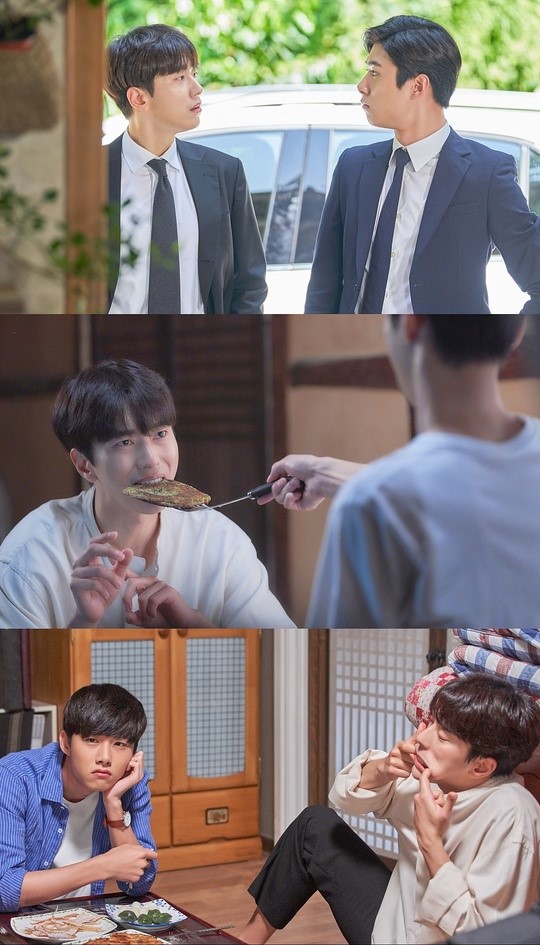 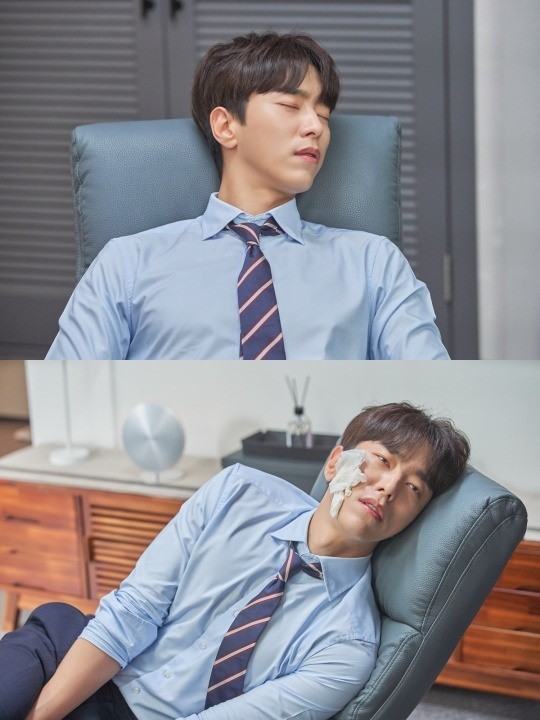 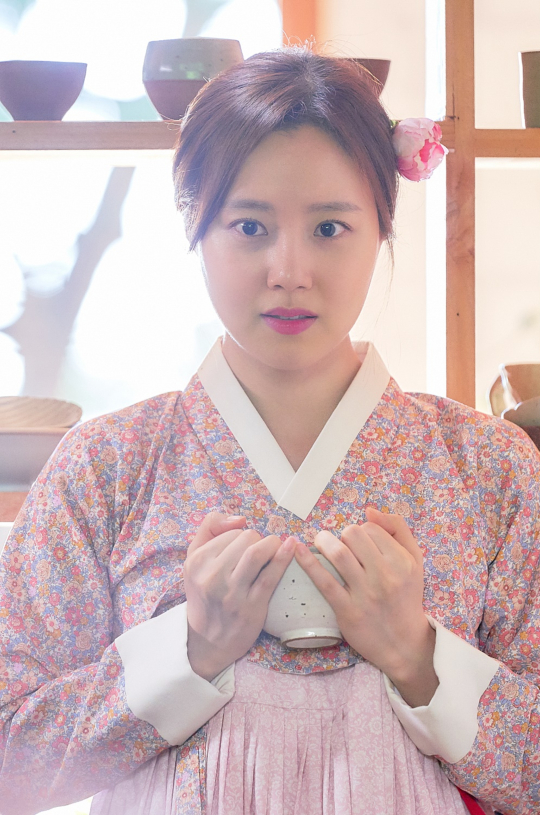 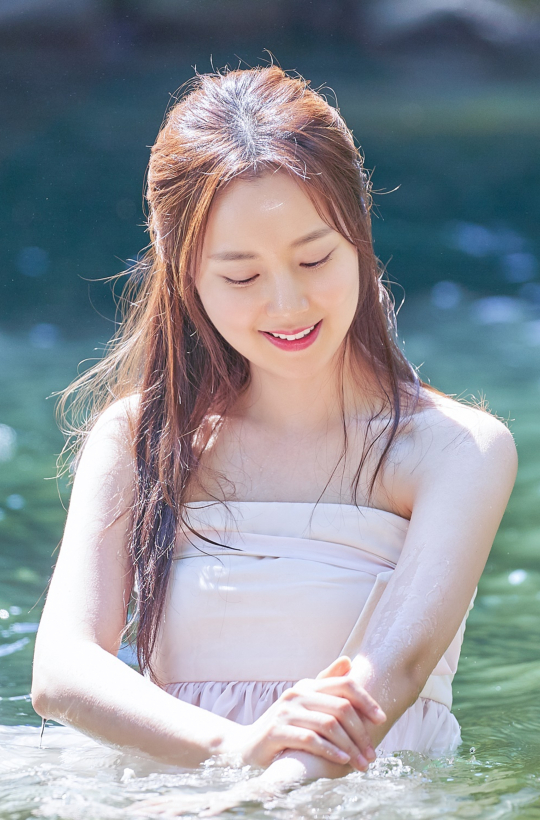 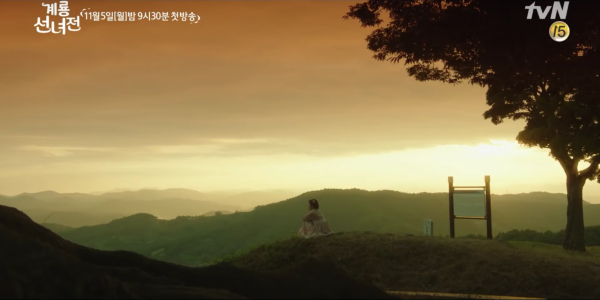 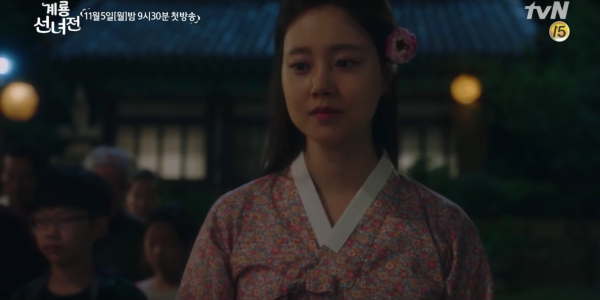 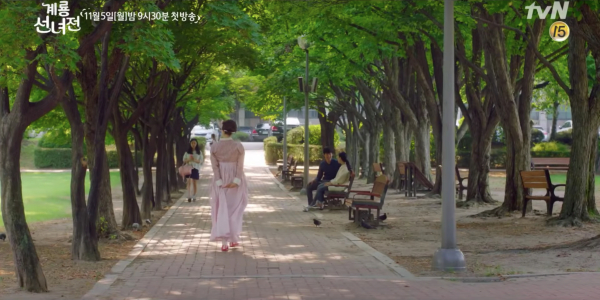 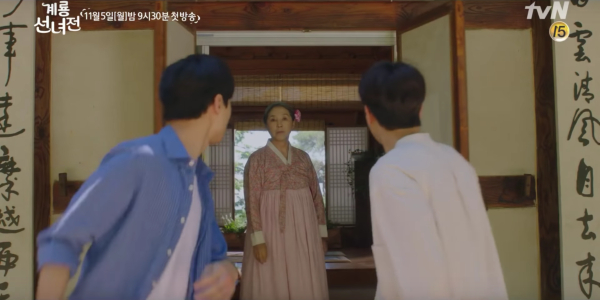 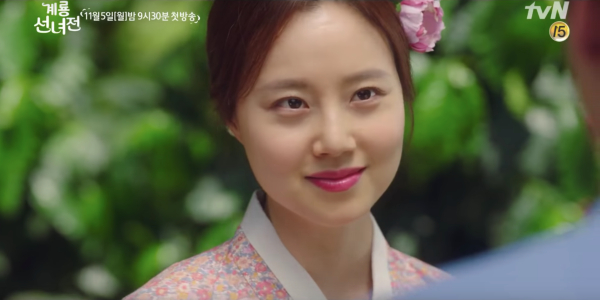 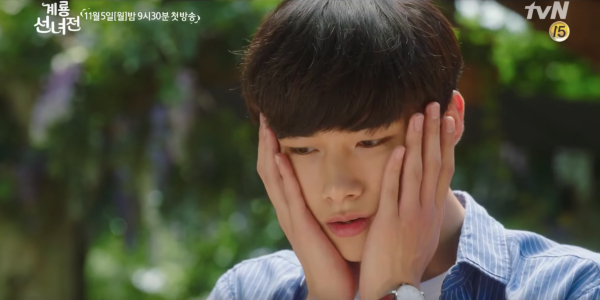 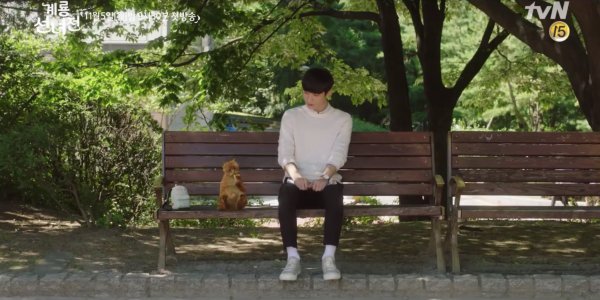 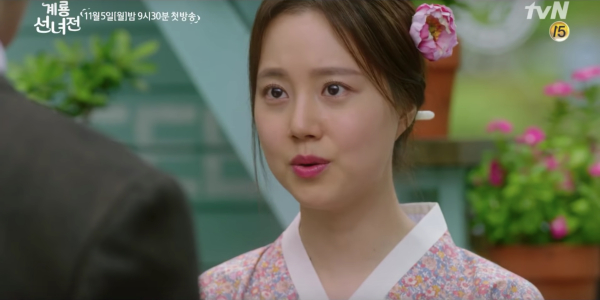 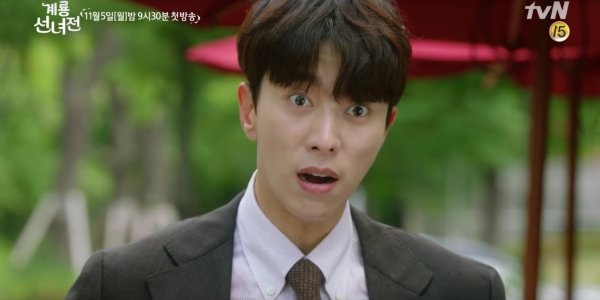 A hero who declare himself as the "ultimate follower of cold rationality and logic" but gets caught as a Peeping Tom? YES!
A cute talking cat/lion? YES!
A noona romance with an age difference of 700 years plus? TBD....

I am so excited for this show. I have already given in to Second Lead Syndrome.

Of course, he is. He is a Ji Hoon. All Ji Hoons are good looking.

Good luck Yoon Hyun-min (one of my favorites)!
I would like to forget WITCH'S COURT. (My problem. I know a lot of folks liked it but I thought YHM's character in WC was treated shabbily. I was annoyed for the entire run of the show.)
The teasers and photos look like it will be fun so I am looking forward to MAMA FAIRY AND THE WOODCUTTER/TALE OF FAIRY/ TALE OF GYERYONG FAIRY.
Wiki reports that this show is pre-produced so I hope everyone enjoyed working on this show.

Eeek, my Mondays & Tuesdays will be so full, but I'm excited for another rom-com. The quirky fantasy elements look fun.

7 bebeswtz❣️Xiao Zhan is my happy virus

This has a few similar elements to "Howl's Moving Castle" (girl alternating from young to old and vice versa, the girl going somewhere in search of something...) so it seems like a very familiar setup that I like :) Can't wait!!

I too was reminded of Studio Ghibli!

I'm loving all these quirky promos. I'm cautiously hoping it'll have a satisfying world building too.

"I'm an ultimate follower of cold rationality and logic"

I'm looking forward to see Goo Duk-sim again! I want her to be in a spunky character rather than mellow one as the Brothers' mother in MA.

Yoon Hyun-min looks really good in this. That teaser is getting me excited to see this.

That bathing-in-the-river scene looks SO relaxing and refreshing I want to be her!😍💦
Does anybody know what's the flower in her hair?

The flower looks like it could be a chalice-shaped rose or maybe one of your namesakes, but I'm not sure. Both those plants have blossoms in shades of white, red, pink, and magenta, among others. For a second I thought it might be a poppy, but now I'm not so sure. I wish I could see it in better detail, along with foliage.

In the 3rd screencap from the bottom, it looks like the plant is growing in a pot. Possibly it is a small shrub or woody perennial, which makes me wonder if it might be a form of rose of Sharon (a hardy member of the genus Hibiscus) or a related mallow (genus Althea).

Haha, I too thought it'd be cliche(for me,of course) if that was a peony😝. I've never seen peonies in RL, but I think they're more..what's the word...full? As in with petals, without a hole in the middle?
It might be a type of rose just as you said.
We'll be told I believe, considering how it's always adorning her head. The beanies are sure going to be overdrive analysing its meaning in the recaps, petal-to-petal, lol.
Looking forward to that!

I checked to see if there are varieties of roses and peonies that are more open and cup-shaped (as opposed to full and densely-petaled), and they do exist. ;-)

Don't deprive yourself of the pleasure of smelling and seeing peonies in person. My neighbors when I was a kid grew them, and they smelled heavenly. ;-)

Ah, is it so?
Sashil-eun, peonies don't grow here I guess. Of course I'm planning to see a peony before I die,hehe.

I think it's a variegated peony but that's as much as I can offer. It has that really tight ball shape of peony buds. Peony, I hope you will see some real peonies soon, perhaps from a florist? The variety is breathtaking.

Funny how right now I'm focused on whether it's a peony on MCW's head than the actual drama.
Imma gonna do a victory dance if it's actually a peony,lol.
BTW,For now, I'm satisfied with the special edition envelope/stamp cover I have which portrays a drawing of a peony plant!

Sure, you can't do much about the drama yet! But oh baby, it's coming soon 🎉🎉🎉

What country is your peony stamp cover from?

China
Actually, my infatuation with peonies started when dad brought me a copy of "Peony Pavilion" from his office library when I was little and at sickbed.

@peony, in St Louis our Botanical Garden has a large Chinese Garden of peonies and tree peonies that is magnificent in the Spring. They are my favorite flower.

I thought it was a variegated peony, too, but only could find a photo of one. I don't think roses exhibit that kind of variegation, but I could be wrong.

I left a page of Google photo clips for you and @peony on my fan wall. I really think that's what it is.

Thanks, @bbstl. I think you're right about the flower in her hair being a peony. ;-)

It looks so nice ! I want to watch it already :D

I choked on coffee reading this. Too much fun, bring it on!

Thanks for your update on MAMA FAIRY AND THE WOODCUTTER, @tipsymocha! Show looks like it will be fun. I didn't realize how much I've missed seeing Yoon Hyun-min until I started reading up on this drama.

The filching of clothing from the swimming hole, along with Moon Chae-won, reminds me of the painters sneaking a peek at the ladies hanging out in the creek in PAINTER OF THE WIND.

Hi @pakalanapikake. O/T I know you are a big fan of LOM and Jung Kyung-ho, so here is a nice pic of RL buddies YHM and JKH from their HEARTLESS CITY (2013) days:
http://i.pinimg.com/originals/84/89/f6/8489f60a325978cfb905a2442fb13266.jpg
JKH's next drama is WHEN THE DEVIL CALLS YOUR NAME scheduled for sometime in 2019. Also from checking in on his Instagram account it seems JKH recently completed walking the Camino de Santiago pilgrimage route in Spain (pic from along the way):
https://www.instagram.com/p/BpEAcBRFZPe/?hl=en&taken-by=jstar_allallj

Thanks for those great links, @marcusnyc20 Bong-soo. Jung Kyung-ho's next drama, WHEN THE DEVIL CALLS YOUR NAME, sounds quite Faustian. Thanks for the heads-up. Only about 2 months until 2019 already. Sheesh. It's interesting that he walked the Camino de Santiago, perhaps to chill out after the intensity of LIFE ON MARS. It's quite an accomplishment. ;-)

Gosh, I just love those two. I could spend my kdrama life watching them do bromances.

I don’t understand how can MCW be so skinny while having such a round baby face?

There are some people who are like that. My own cousin is one of them. She is small but all the meat goes to the face especially when gain weight. It's actually kind of frustrating.

I fell in love with this show just by reading the description of the second teaser <3 <3 <3!

Well, at least he's not in high school.

I hope we get to know who the husband is sooner in the drama because I'm tired of the 'who is the husband' trope for 16 episodes.