The upcoming SBS drama Revenge Returns has just released photos of their first script read. The ominous title might have you thinking the drama is a dark melo, but it’s actually a fun, healing rom-com with PD Ham Joon-ho (Greasy Melo) and writer Kim Yoon-Young attached.

Yoo Seung-ho (I’m Not a Robot) will play the title character, Kang Bok-soo (bok-soo is the Korean word for revenge). His character is described as being manly with a wide heodang streak. As a teen, Bok-soo gets expelled from school after being framed as the perpetrator of a violent assault. His life turned upside down, he vows to get his revenge on those who wronged him. As an adult, he returns to his school ready for revenge, but Bok-soo finds himself faced with a series of unexpected incidents and events.

Jo Boa (Temperature of Love) will play the role of Sohn Soo-jung, Yoo Seung-ho’s first love and former schoolmate, who is now teaching at her old high school on a temporary work contract. She’s charming, beautiful — and has a quick temper. Kwak Dong-yeon (My ID is Gangnam Beauty) will be tackling a villain role for the first time in his career. His character Oh Se-ho is the charismatic antagonist to Bok-soo’s protagonist. 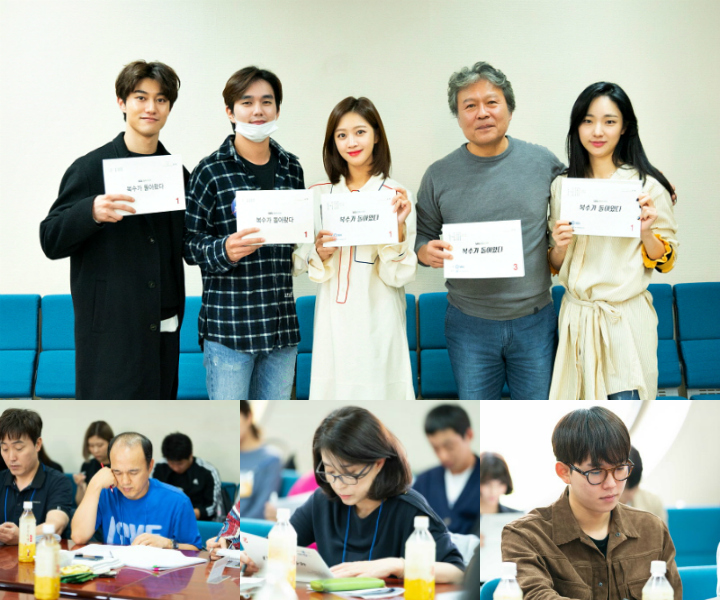 Eom Hyo-seop (My Secret Terrius) and Kim Kwang-kyu (Your Honor) will be the drama’s comedic relief as the school’s principal and assistant principal respectively. Kim Dong-young (Let’s Eat 3) will also be part of the school faculty as Yoo Seung-ho’s supervisor and former schoolmate.

Park Ah-in (Mr. Sunshine) will be playing Bok-soo’s “cute” stalker, Yang Min-ji. Actor Yeon Joon-seok (Your House Helper) will be playing the worst student in the class, who is perennially stressed about his grades. Yoo Seon-ho (Big Forest) will be playing the role of Yoo Shi-on. He may look like a pretty boy but he’s the toughest tough guy you’ll ever meet.

Revenge Returns will premiere in December on SBS. It will follow Fox Bride Star in the Monday-Tuesday primetime slot.

I've been wondering what Kim Mi-kyung was up to... it's been all of five minutes since I've seen her in anything. I love her-- she makes everything she's in better. I hope it's a good part and not a generic/underwritten mom character.

Excited to see Yoo Seung-ho back in dramaland so soon after INAR!

SOON? he's been gone for YEAR I thought the entire point of going to the army early was to work on more projects in your 20s! he's a terrible cat dad.

It is soon enough for me. 😊 since there are actors I like who took longer (years) to get back to dramaland.
I hope this will be a great and fun drama.

terrible cat dad? LOL what on earth does that mean? If it means he has pet cats that he left behind then ok

Yoo Seung Ho ❤️ He’s such a likeable actor and person. I hope it’s going to be more successful than INAR in terms of the ratings, hope the story will warm my heart as INAR.

Oh that's cool that's cool I *Whitney Houston's "I Will Always Love You" starts playing* think that the premise sounds somewhat boring and the revenge plot can be problematic *fireworks light up the sky like shooting stars* and I haven't really seen any of the actors (other than KDY) in anything before *bees form a halo around my head, whispering that the Earth is no longer dying* but I think I might check it out. For some reason.

Because the bees dying was (is?) a harbinger of the coming environmental apocalypse?

I hear that YSH is kind of okay at this acting thing, so don't let his presence prevent you from at least giving this a chance.

yes. coincidentally, bee is also an animal associated with Aphrodite, the goddess of love.
anyway yeah YSH is alright I guess. maybe he won't ruin it.

When I read this conversation and stalked your fan wall to figure out who was this other YSH that appears in your dreams.

Kwak Dong Yeon! I'm low key annoyed that he had to play second fiddle in his last drama when he had more experience than the first lead (and it showed), but at least this time round he has more seasoned actors to play off with.

There’s also the solid supporting cast: I’ve seen those four veterans everywhere and they certainly won’t let us down, but there’s also the bonus of Kim Dong Young and Yeon Joon Seok, who are actors I think are deserve more recognition. Here’s praying that this show boosts them closer to a lead role.

Cool, so it’s not a melodrama but a rom-com set in a school? About teachers and students? With Yoo Seung Ho possibly rocking teen guyliner? I’m in!
*tears of joy*

I had reservations about picking up this drama. But now that you mentioned the possibility of Yoo Seung Ho rocking teen guyliner, there is only one option for me: WATCH IT

Kwak Dong-yeon was a little villainish in Radio Romance or at at least a completely unprofessional as a psychiatrist.

8 bebeswtz❣️Xiao Zhan is my happy virus

Oh man, it’s always so much fun to have Kim Kwang Kyu provide comic relief in dramas, especially if it’s dramas with heavier subjects/topics (“Marriage Contract”.... ⬅️ but with that one, it probably helped the chemistry and rapport of the cast because of the 10+ years in friendship that Kim Kwang Kyu and Lee Seo Jin have ☺️☺️)

I was a little taken aback with Eom Hyo Seop providing comic relief cuz I've only ever seen him as villains and a doctor that took care of YSH when he had human allergy in his previous drama.

You're right!! My memory also tells me that he's only acted as serious characters