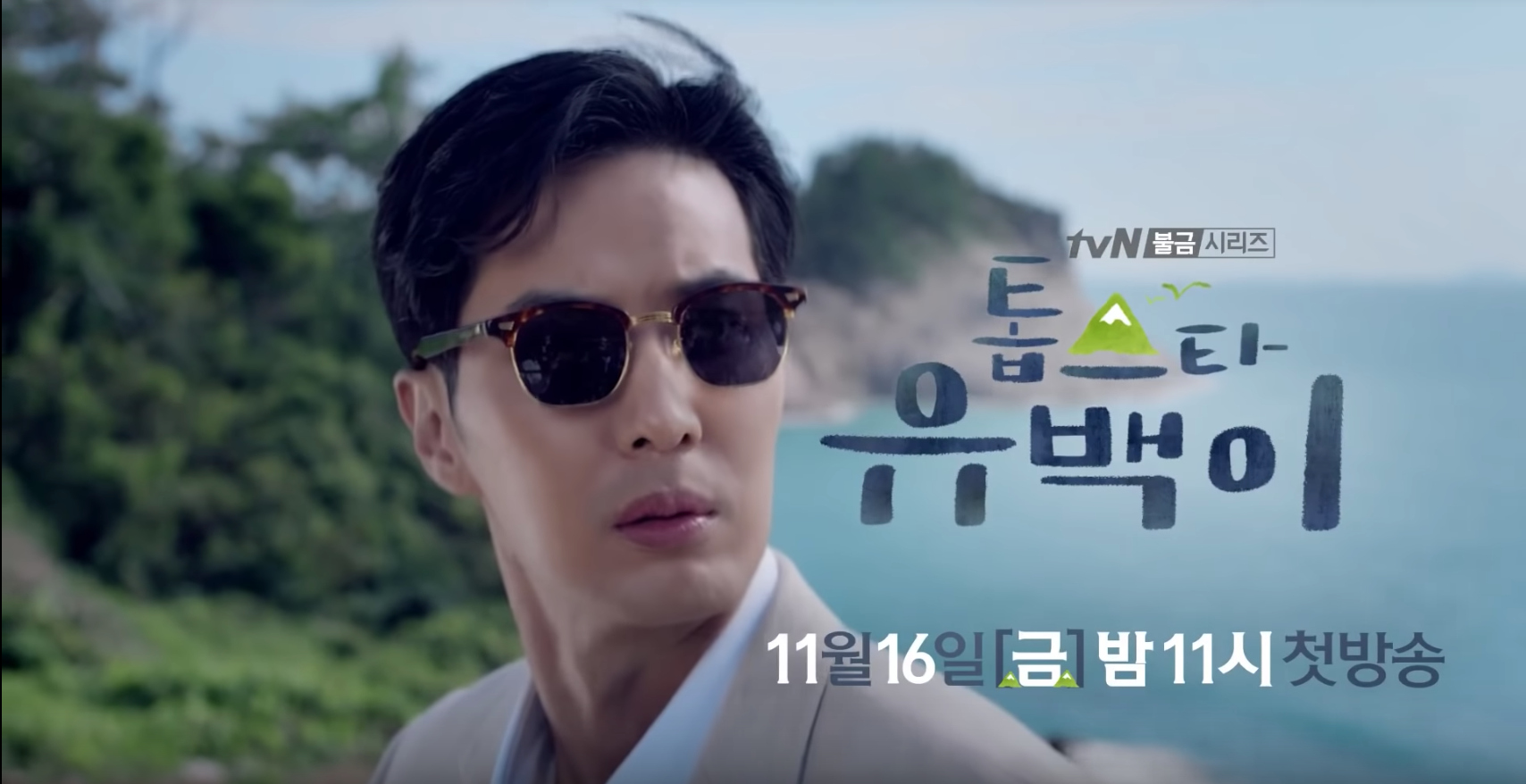 Kim Ji-suk is top star Yoo Baek, an idol-turned-A-list actor and singer. He’s the type of person who was born rude and loves to show off his muscled body. Yoo Baek’s sense of self-regard and self-love is limitless; in other words, he’s a narcissist from head to toe. But a huge scandal forces our top star to temporarily relocate to a distant island where he meets Oh Kang-soon, played by Jeon So-min.

Oh Kang-soon was born and raised on a small island that’s largely been untouched by modern life—so no internet, smartphones, or TV reception. She’s not the most fashionable woman, but she’s tough, sweet, and a hardworking, filial daughter. Kang-soon is also famous on the island for her tenacity. When she meets Yoo Baek, she decides to embark on a project to change him into a better person.

The drama is billed as a romance that is a clash of cultures. Yoo Baek will turn over a new leaf and become a better person while he falls in love with someone who is his complete opposite in almost every way.

In the teaser, we hear reporters ask Yoo Baek, rocking a suit-no shirt look, “Did you drink and drive?” “If you didn’t even drink, why did you flee?” “Was it a fight?”

Then a man says, “The whole world is mad at you right now. Just tough it out for two weeks till things calm down.” We see Yoo Baek in a pristine white suit on a dingy dinghy, leaning against a surfboard. There’s a time lapse and Yoo Baek starts to sag… then puts a life vest on… then vomits over the side of the boat before eventually making it to the island.

We get quick glimpses of Kang-soon and the other island residents before the teaser ends with Yoo Baek turning back and asking in disbelief, “This is where I’m going to live?” 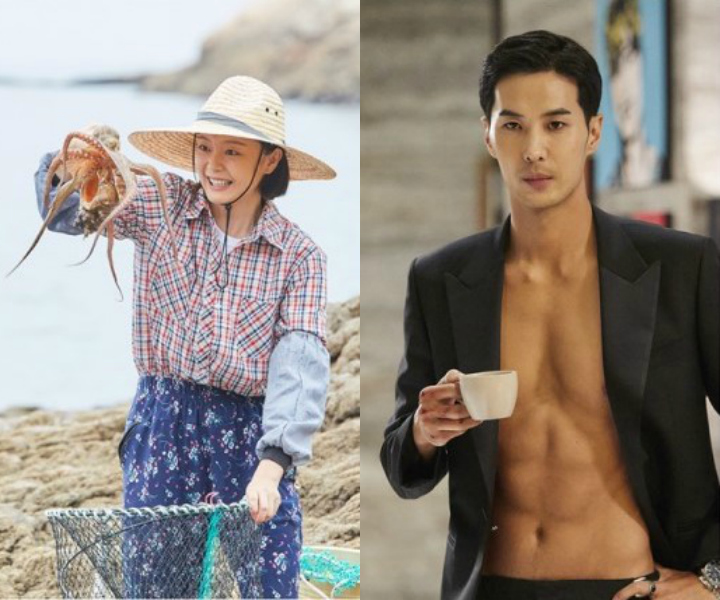 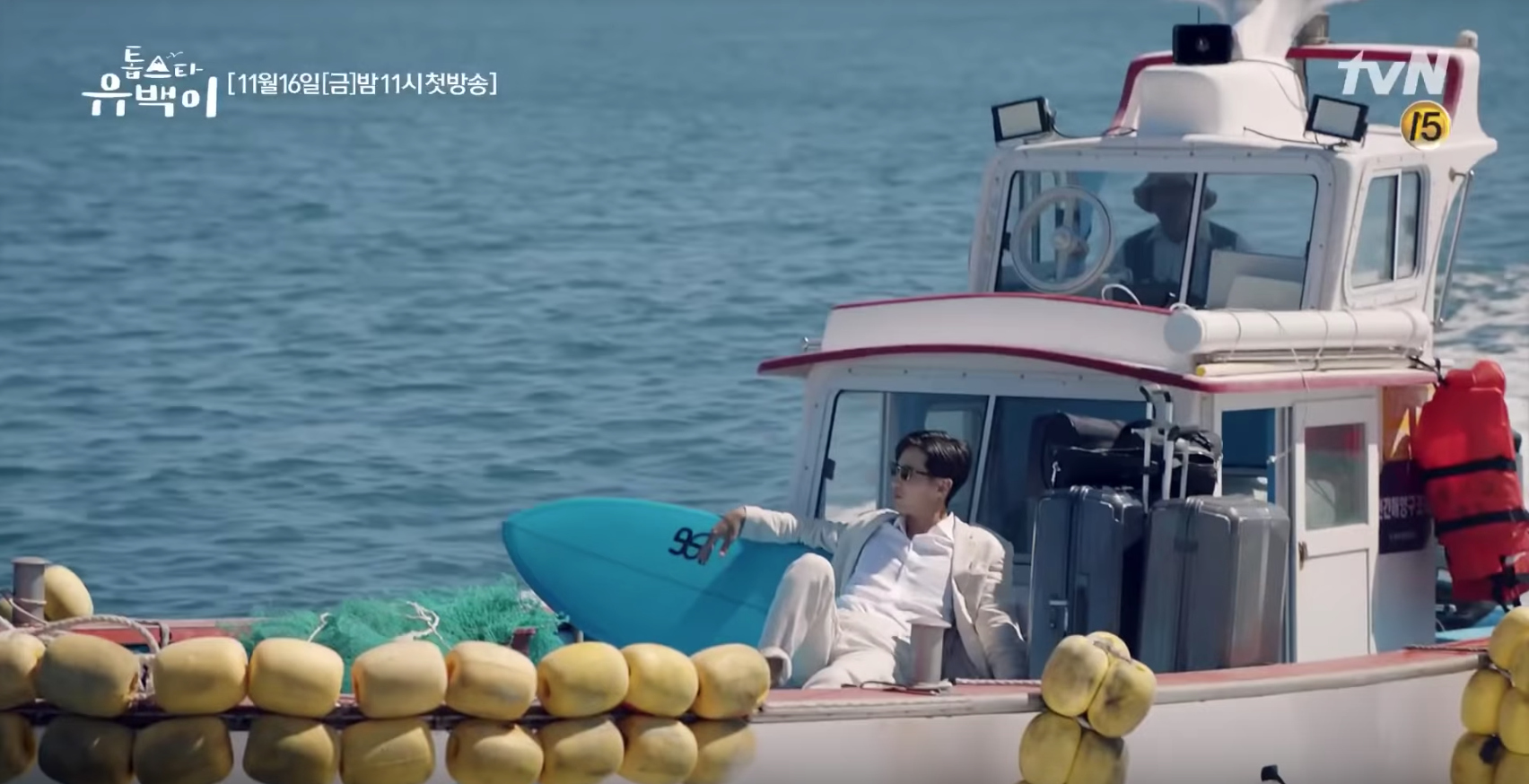 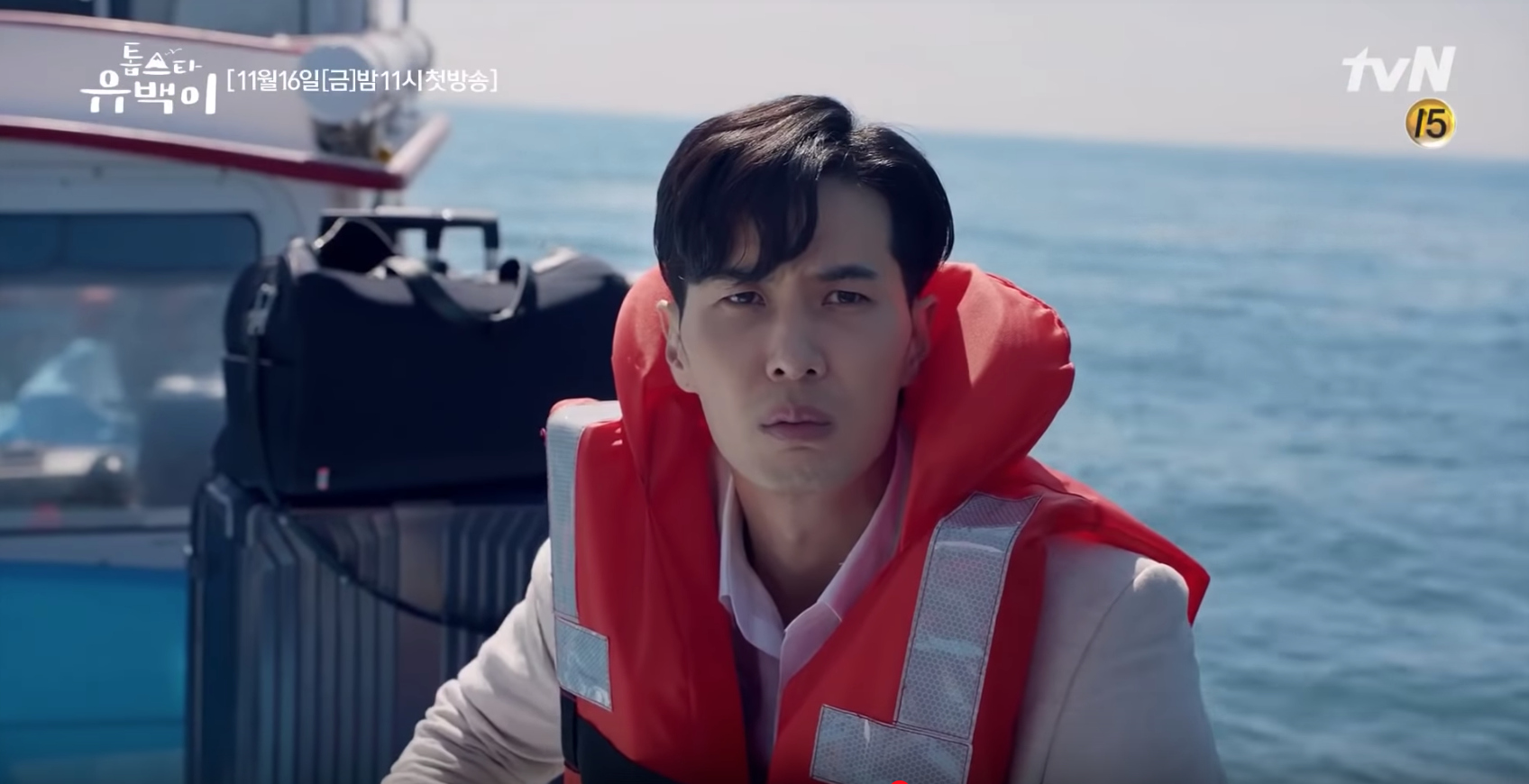 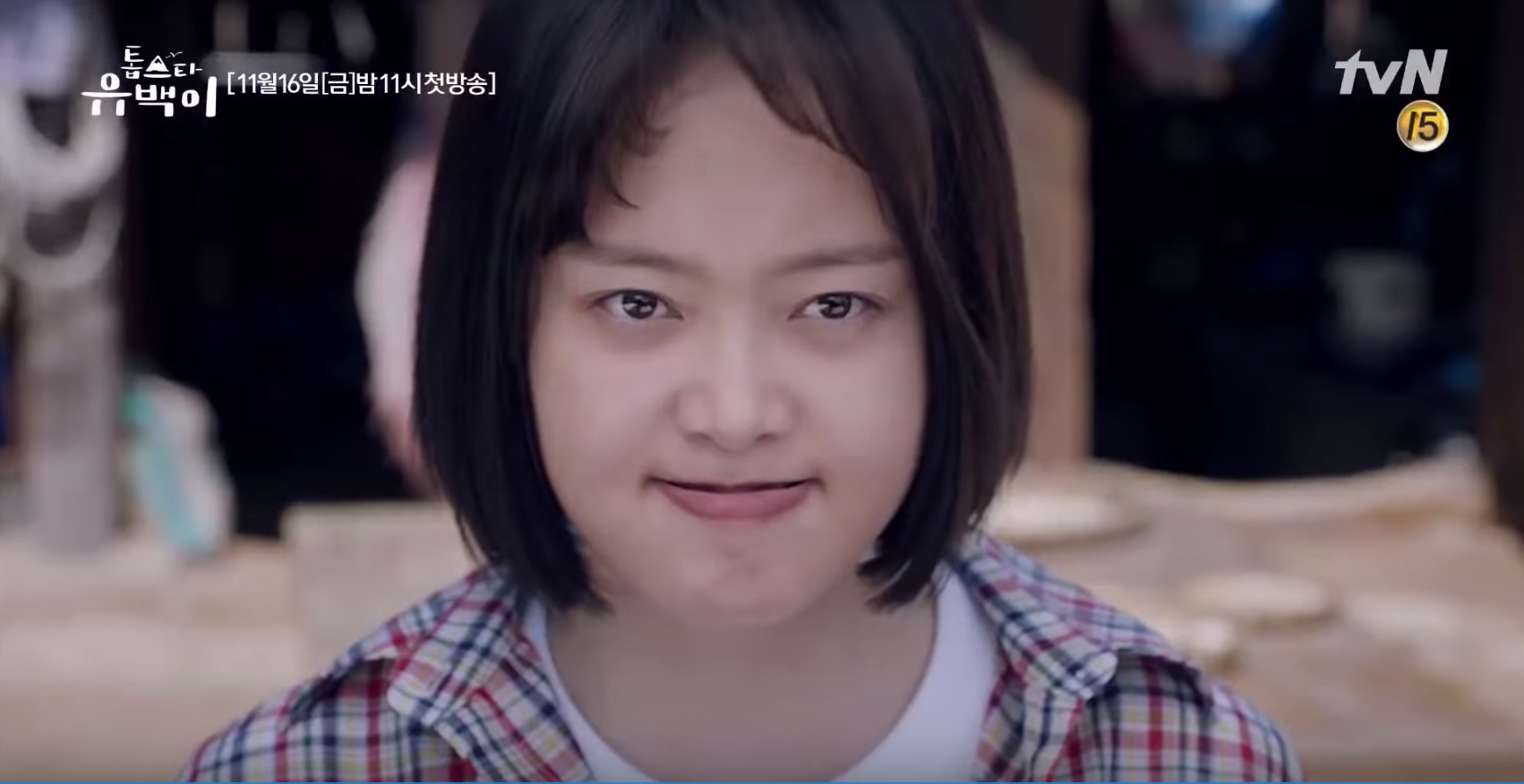 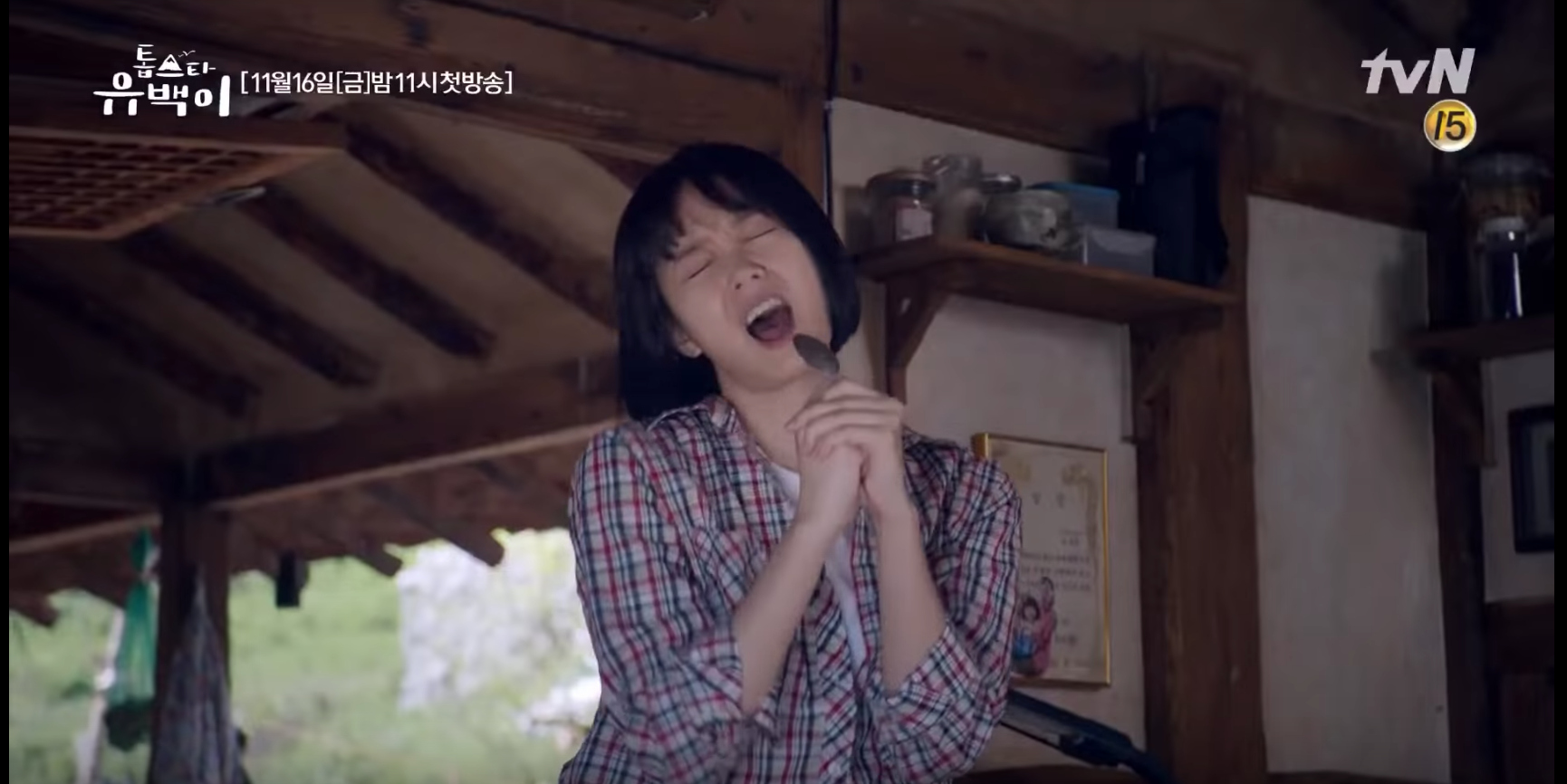 this seems like a fun weekly show to watch when i'm in need of something to end the week on a good note.

This looks like fun! I am a fan of Kim Ji Suk so will watch put for this. ☺

My fangirl dream! 🤣 I see the tropes but this drama was made for me.

You said my exact thoughts... plus Island life and sailing suit my fangirl dreams. (This island won’t be neutral though). 😄

This looks so much fun. And judging from its predecessor, it might be a short series too (10 or 12 eps), which is a plus. I just hope someone is kind enough to sub this.

A short series would float my boat, too. I would rather have a nice, tightly-written drama than one that drags on and on and ends on a limp note. I need a good, solid plot, character development, and execution along with my eye candy, lest it become pointless and cloying. In that regard, CONSPIRACY IN THE COURT has spoiled me forever. It is eight episodes of pure awesomeness.

There's no reason why other genres cannot follow that recipe for dramaturgic excellence. In that respect, I think that typically-shorter (in running time and episode count) Jdoramas trump Kdramas that attempt to stretch paper-thin plots far beyond their structural integrity. For the heck of it I watched the first two episodes of BUNRAKU SHOJO last night, and laughed my butt off. The pacing was great. It jumped into action feet first. It remains to be seen how it unfolds, but at least it got off to a fast, sure-footed start.

There have been a few other 8-episode Kdramas, and some 4-part drama specials as well, so it's not as if there are no precedents. Many a 1- or 2-episode drama special has left me wishing that they were longer, not lamenting dragginess, manipulative angst, endless push-pull, etc. That's the indisputable sign of a good drama. ;-)

Regarding less episodes I wonder if they are even enough to break even. That many be the reason why there are very few 8 episodes dramas because they are half the usual length and perhaps also have low production budget. Dramas in my countrt especially have a longer number of episodes because they have to earn some profits too.

I seriously hope this gets subbed. But now with DF gone too, which usually picked up shows from MBN and other cable channles, I hope this doesn't go under the radar like Big Forest.

Ah, yes, you bring up a good point about the profitability, @wapzy wapz. We can't forget that, as SubWey so often reminds us. And with them being stranded on an out-of-the-way island, who will they have for sponsors? That's an interesting question right there. ;-)

Thanks for the update on TOP STAR YOO BAEK, @stroopwafel. This gladdens my Kim Ji-suk-fangirl heart: a mashup of CHUNO bare-chested hunkiness meets Mr. Rooftop Party from OH HAE-YOUNG AGAIN, crossed with THREE MEALS A DAY: FISHING VILLAGE season 3, plus a twist on 20TH CENTURY BOY AND GIRL. I think I can safely assume that the protagonist will not go all paranoid Yeonsangun (REBEL) on us, although he will start out as a diva, if not a tyrant. After playing second lead for so long, I'm glad to see KJS in a show in which he'll finally get the girl -- er, will be made to jump through rustic hoops before she fixes his wagon and his disposition. It will be THE TAMING OF THE SHREW in reverse. Har!

I'm thinking of playing the island. Should I?

Oh, that would be cosmic, @yyishere YY! Although I see you more as the boat -- perhaps because of your excellent mobility as the Truck Of Doom. But wait -- you'd get more screen time as the island. Yep -- geographical feature FTW. Hwaiting! ;-)

BTW, did you do the fishing boat cameo in THE GUEST? The fluttering pennants looked so you.

If YY doesn’t care for the boat role, I’ll take it... I’m sure I will ship the leads really hard. 😂

Except, I’ve come to adore Lee Sang Yeob too (currently watching House of Bluebird). Hopefully his character won’t be in a love triangle with the leads because my boat could take a lot of water from SLS.

If you accept the role of the boat, make sure your name is not "Minnow" or you'll run aground on an uncharted desert island. ;-)

Fingers crossed that your performance will not be scuttled by a sudden tempest in a romantic teacup. This isn't supposed to be ROARING CURRENTS. ;-)

Made me lol like crazy over geographical feature. Nope, that wasn't me. I can't swim so I steer clear of boats.

All righty, then, @yyishere YY. Island it is. You bring so much gravitas to your portrayals of the Cliff Of Non-Doom that I know you'll excel as the island, especially in the atmospheric shots of you wreathed in writhing filaments of haemoo (sea fog) as the blood-red sun peeps over the horizon at dawn, gilding your summit in... Excuse me, where was I?

The photo that was chosen above - I had to check again, I thought it was Benedict Cumberbatch 😀

Yayyyy, I was wondering if Dramabeans will post about this drama or not. I am so happy for all the leads and from the look of it the cast has got good comic chops and chemistry.
I have my trust in jeon somin.
Fighting eonnie. Hope it hits big.

Sounds like fun. Please, no evil schemers /ex girlfriends , thanks.

Again, another tVn drama that makes it to my watch list. Is it me or does it seem that Netflix is picking most of these from tVn up? (I.e. Live, Mr. Sunshine, Life) So hopefully, eventually, I’ll be able to see this one! And I’m always impressed with Kim Ji-suk no matter what role he plays and he’s totally killing that ab look. 😛

I'm keeping my fingers crossed that Netflix or Viki gets a license for this too!

I am so ready for another Kim Ji-suk drama. I find this actor incredibly charming.

1) Kim Ji Suk in that Black blazer is absolutely rocking the no shirt look . Is that eye liner I spot? He looks amazing!
2) After watching her first in 1% of anything, I've loved So Min (and then in Running man) so looking forward to her in this one! I still have to watch Cross.
Looks like a fun show! ^.^

Why can't the suit jacket no-shirt be a permanent look in kdrama-land? I think it needs to be the next fashion trend.

I happen to be watching Chuno (for the first time) right now, and it looks like Kim Ji-suk has been honing that physique in the interim. Just sayin'. Oh yeah, the show looks funny and cute, too. Hopefully we'll get some legal subs somewhere!

His role as randy Lothario Wang-son in CHUNO put KJS on my radar. Keep your eyes peeled for the Joseon shower scene with General Choi. It's a hoot.

KJS was hilarious in OH HAE-YOUNG AGAIN, especially when speaking "French" with noona and dancing up a storm as Mr. Rooftop Party. He was also touchingly vulnerable and tragic as a sadder-but-wiser version of Wang-son.

I was tickled to bits with KJS's sympathetic portrayal of tyrant Yeonsangun in REBEL: THIEF WHO STOLE THE PEOPLE. It really showcased his dramatic range. What a tour de force.

Strictly for research purposes, you might want to check out Jang Hyuk in the currently airing BAD PAPA to see Dae-gil's latest incarnation. *fans self*

@pakalanapikake I've just passed the point where Wang-son receives a much-deserved foot to the jewels. I like him, but boy needs to keep it in his pants and stop propositioning teenagers and everything else passing by in a skirt.

I loved Oh Hae Young Again! Noona couple was one of my favorite parts! 😁

I'll have to check out Bad Papa. Thanks for the recommendation!

Yeah, Wang-son truly has a one-track mind at least half of the time. I don't recall that exact comeuppance scene, nor when it occurred. At least he is open about his carnal motivations, and most of the ladies appreciate his sweet nothings. "Make love, not war" is a much better alternative to what some of the baddies are doing. -- It sounds as if you still have not gotten to the shower scene.

You're welcome, re: BAD PAPA. Jang Hyuk is hunktastic -- like Dae-gil minus grime, sword, and mane of glory. Unexpected bonus: his boxing nemesis, played by Ha-joon, is just as much of a hunk, which I did not expect after his role in RADIO ROMANCE.

I hope we can see this in a timely fashion (as opposed to, say, having to wait for it to be complete before Netflix offers it) because it looks like just the thing I may need after the election 😬