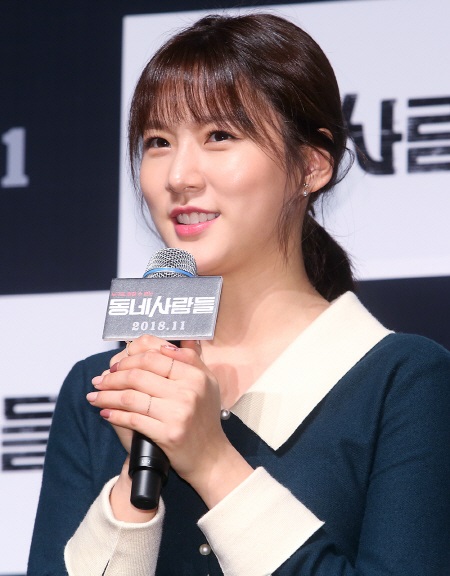 Oh, I like this. Kim Sae-ron is being courted to join the second season of Neighborhood Lawyer Jo Deul-ho, the 2016 hit KBS drama that starred Park Shin-yang as the titular character. In the first season, Jo Deul-ho loses his high-profile prosecutor job and finds his footing again as a neighborhood lawyer who fights for the rights of everyman.

The show reached viewership ratings of an impressive 17.3%, and Park confirmed months ago that he would be reprising his central role. Go Hyun-jung (Return) has also confirmed she’ll be joining the cast as a woman who hides her position in an effort to carry out an act of revenge.

Kim Sae-ron has been offered the part of Yoon So-mi, the daughter of one of Jo Deul-ho’s colleagues from his prosecutor days. So-mi suffers from Asperger syndrome, but she’s intent on a career in law – she’s been inspired by family friend Jo since she was a little girl.

I hope Kim takes this project – she’s led previous dramas (Mirror of the Witch, High School: Love On), but this feels like a meaty role and I’d love to watch her hold her own against the two powerhouse leads. In the meantime, Kim Sae-ron co-stars opposite Ma Dong-seok in The Neighbors, a suspense film that opens next month.

Neighborhood Lawyer Jo Deul-ho 2 will follow Dance Sports Girls on KBS and will premiere in January 2019.

Actually excited for Go hyung jung. Hope she will be able to reagain the appreciation of the viewers again.

*regain the appreciation of the viewers.
Edit button pleaseeee

Yay! It's good to hear news about Sae-ron in a drama especially alongside Go Hyun-jung. I love them both in "Queen's Classroom."

I really do hope that the writer shows sensitivity and some depth of understanding for the Autism Spectrum Disorder. Dramaland does not gives me confidence with its track record depicting lives of people who suffer from mental health issues.

I have a friend with Aspergers - he's so high-functioning it's barely noticeable that he's on the spectrum, this kind of performance would probably require a lot of research from the actor in order to portray the nuances of the condition accurately.

Absolutely! Being a person who works with hundreds of teens every week, I guarantee you that "one size doesn't fit all" when it comes to the spectrum. The range of that spectrum is wide. Probably a few people will complain no matter how Kim Sae Ron plays the part because her character won't match the person they know who is "on the spectrum" so they will consider it wrong. I am excited to see how Kim Sae Ron plays this. :-)

I totally agree. Thank you!

Kim Saeron is such an amazing actress, I'm sure she would do a great job if she was cast!

We should no longer refer to the disorder as ‘Asperger’s’ as Asperger was a Nazi doctor who experimented on children. We now like to say that the patient is ‘on the spectrum’.
Thanks!