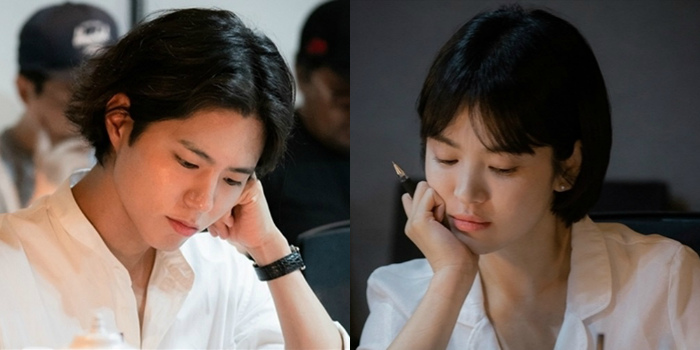 Photos have been released from the first script reading for Boyfriend, the highly anticipated buzz project bringing Song Hye-gyo and Park Bo-gum back to the small screen. It’s been at least two years since we’ve seen either in dramaland, during which time Song Hye-gyo got hitched to her last co-star (Song Joong-ki), fulfilling the dreams of Descended From the Sun fans everywhere, and Park Bo-gum held a rather adorable stint as a temp worker on Hyori’s Homestay, driving up viewership ratings—the episodes he appeared in were the highest rated ever for a variety show on JTBC.

Song Hye-gyo is cast as the daughter of a politician and the ex-wife of a chaebol. She appears to have the perfect life, but she’s never had a single moment to live for herself. Opposite her, Park Bo-gum’s character is an average young man, but he’s lived a happy and fulfilling life. They’ll meet by chance and scandalously fall in love, and despite the odds they face, he’ll show her the path to happiness and the importance of taking time for oneself.

Park elicited laughter when he introduced himself at the script read, saying, “I’m Park Bo-gum, playing the role of Kim Jin-hyuk, who is as youthful and as ripe as a green grape.” The mood at the table was said to be professional but jovial, and rounding out the cast and participating in the reading were Cha Hwa-yeon (My Only Ally) and Go Chang-seok (The Miracle We Met).

The noona romance will be directed by PD Park Shin-woo (Jealousy Incarnate) and written by Yoo Young-ah (Entertainer). Boyfriend will air on Wednesdays-Thursdays on tvN, and the premiere has been moved up to November. 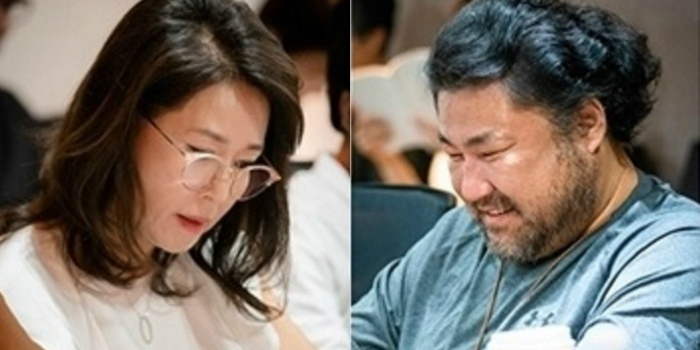 Not gonna watch this but I hope it's a good project, for both their sakes.

(Random sincere observation: It's great and even overwhelming to see Dramabeans buzzing with so much news and recaps, after the drought experienced earlier this year.)

(Random sarcastic observation: the leads may have the same hair length come November).

I hope he grows his hair longer. PBG in a bob doesn't appeal to me, but I could see him looking good with longer hair.

Is he growing it out for a sageuk role or something, or is this just a personal style he's trying out?

Me too. I was excited for his return, but the genre is not one of my favorites. But he usually picks good projects, so I hope it does well.

Did the site ever address the weirdness that happened before where there was just ... nothing?

I would like to know the answer to that too. Although my theory is that dramaland started out quiet dry this year. I don’t reacall there being anything of real interest aring until recently.

My guess is they were busy expanding the new shopping site and neglected the blog. sad but I think that's where theu are hoping to make more koney.. but when the nlog is dry ppl will stop coming ot the site, so...

Hmmm.... I never thought of it from that angle. You make a valid point.

They look like they have same hair length now...

Bo Gum's "Won Bin" look cracks me up. In an endearing way of course.

Both he and Hye-gyo are pretty boring to me acting wise though 😂 so I probably won't be watching.

Gummy is rocking the hair, in my opinion! So exciteddddddd!

Is Park Bo-gum seriously going to keep that hair style for the drama?😂 He looks great but seriously I need a change of hair style.😂
Awaiting drama on my dramalist.😍

😆I find it super hilarious that most comments so far are about Bogummy's hair. His ahjumma bob should be offered the role of the second male lead. After all controversy brings in high ratings even if it is the follicular kind!

It's like the polar opposite of Yoo Ah In's wig in Chicago Typewriter.

Now THAT hair is a scene stealer. I root for that hair.

That was and still is one of my favorite wigs, he rocked the hell out it.

This is weird, but I'm still excited!? 🤷

I happen to really like Park Bo-gum's hair lol. But LOL @ "ripe as a green grape". Bless him 🤣

ahhhhhhh OPPA is back!!! In a show I'm not very excited about... But he's BACK!!

@kimbapnoona I'm not gonna mention the hair... Because it needs to go! 🙈

So they're really doing this...
I don't like the idea of it, but i'll watch it for PBG
His hair style tho... 😬

I will attempt to watch this for Song Hye-kyo. Maybe this is the role that will endear me to Park Bo-gum finally.🤞🏿

I really like PBG, he's adorable (in Reply 1988 and Love in the Moonlight) i'm glad finally he has a new project on the small screen, but not with THAT hair, not with the leading noona and the storyline sounds stereotype.

So i dont think im going to watch it. I'll wait for his better project.

The casts are OK, but I'm more interested with the premise rich woman vs average guy here because it's unusual in kdrama plot.

Spoken my mind Sera. :) I also really love noona romances - so.im definitely in for this show.

Finally Bogummy will be on my screen soon.... can’t wait for November!!!!

The writer makes me WORRY, Entertainer was bad, I couldn't get past episode 4.

See, that’s what I’m worried about. Fine with Miona romances and Bogummy could grow his hair down to his butt ( actually, at that point I probably would be forced to turn in to see if he could rock a mane of glory like that ) but I don’t think I’ve made it through anything the writer has wrote. Bogummy and Song Hye-got are usually pretty good at picking projects so I’m curious but a bit concerned at the same time.

Especially since they are quite selective with their projects in the recent years, the scripts had better be good.

I actually like that a male character is sporting a different hairstyle even if it isn’t the most appealing hair but I still think he looks good in it based on his photoshoots. I’m not really digging hye gyo’s hairstyle though it looks like a kids hairstyle.

Hairstyles out of the way I’m excited to see both of them individually so I’ll be watching this for sure.

believe me the cutie bogum intends to have this hairstyle on purpose to look kinda not attractive lol from what i check the character is so poor ,happy &free spirited so i guess he try to be naturally messy.

How funny no one is pearl clutching and pontificating and declaring they shan’t watch because the age difference in this Drama. Double standards apply when the sexes are reversed I suppose.

For me, the age difference is not a problem when they are 25 and 36, regardless of which gender is older, they are both well into adulthood.
Whereas I remember being put off watching Mirror of the Witch because the romantic leads where 16 and 30, where the younger one is still a child. Personally, I would have found this disturbing even if the genders where reversed.

I hope the romance is believable.

I think Bo-Gum looks great in any hairstyle and Song Hye-Kyo as well (her shorter hair in Worlds Within was cute), but they really look a bit too similar. We'll see what their styling will be in the actual drama.

I'll definitely watch at least the first few episodes, I love them both. Fingers crossed the drama is good and does well :)

Curious about this one. I hope they do something about his hair...otherwise they will both have a bob lol

Thanks for the news, awcoconuts.

For a second there, I thought I was seeing Im Se-mi, who is currently portraying an NIS agent in TERIUS BEHIND ME. Add her to the cast, and we'd have the Three Musket-hairs. ;-)

Love the fact that most of the comments have to do with Park Bo Gum's hair, while I'm sitting here wondering how awkward it is for them to act together as Song Joong Gi's wife and his best friend. XDDD

Well that hair on Bogummy is certainly head-turning, was scrolling and did a double take, scrolling back up.
I like the change in appearance, it gives him a more mature vibe with a hint of sexy. I hope he grows it longer.

So this is not only a noona romance, but an adultery one? Wow, how did some Park Bo Gum fans take it? Their precious oppa tainted!...*faints dramatically*...
I hope Song Hye Gyo grows out her hair, don't like that hairstyle.

Now, for the credits...
PD: Jealousy Incarnate. Good, loved the soundtrack and directing.
Writer: Entertainer....*screech stops!*... Erm, I've heard not so good reviews about that show, never watched it though...Hmmn

I didn't see any mention of adultery though...?

I'm nervous about the writer, 'entertainer' is not so good even with Hyeri and Jisung. I hope it will turn to be great because I miss Bo Gum so much, but not with that hair please.

I’m apprehensively looking forward to this. I love PBG and I know he can carry the drama but a good actor can’t save a bad drama.

I'm not gonna lie at first glance I thought PBG was a ladyyyy.