I’m finding myself weirdly braver in my viewing choices recently, and if I can stomach Netflix’s The Haunting of Hill House, I just might be able to watch this. OCN’s Priest is preparing for its premiere this coming week, and has released some last minute clips and stills to give us a glimpse of what’s in store for us.

The first clip, which is really an extended highlight reel, shows Park Yong-woo (Life Tracker Lee Jae-goo) in a church when a boy bursts in to request help for his mother. Outside, a woman falls to the ground from a second-story window, possessed and looking positively terrifying in her white dress and with her red eyes. I’m glad that Park Yong-woo’s character looks as petrified as I do as he confronts the woman with Bible verses.

Elsewhere, a news anchor relays the details of a shocking crime, where a former priest-turned-counselor stabbed a young boy who was his client. As we get shots of Jung Yumi’s (Investigation Couple) doctor character trying to keep the boy alive, police finds the former priest covered in blood with a crucifix by his side looking like he’s in shock as well. Park Yong-woo goes to visit his former colleague in custody, who tells him that the boy has been possessed.

Aww yeah, are we going to have ourselves an exorcist Scooby gang?! Yeon Woo-jin’s (Nothing to Lose) young priest character is just one of several individuals Park Yong-woo gathers together to fight against the demonic. Sohn Jong-hak (Familiar Wife), Oh Yeon-ah (100 Days My Prince), and rookie actor Yoo Bi will play a detective, an art gallery owner, and an ambulance driver, respectively, who join our two priests in attempting to save the possessed.

Interestingly, much of the action seems to center around the one hospital where Jung Yumi works, and it seems that the boy at the beginning of the highlight reel sets off a chain of events that engulfs not only the patients but also the doctors at the hospital. From a doctor’s perspective, I can see why Jung Yumi looks pretty horrified at how the priests treat a child who’s supposed to be in her care. But I hope Jung Yumi gets over her disbelief fast, since it looks like she serves as a significant barrier to the priests and their team in saving her hospital from becoming one expansive nightmare.

OCN’s Priest is set to premiere this coming Saturday, November 24. 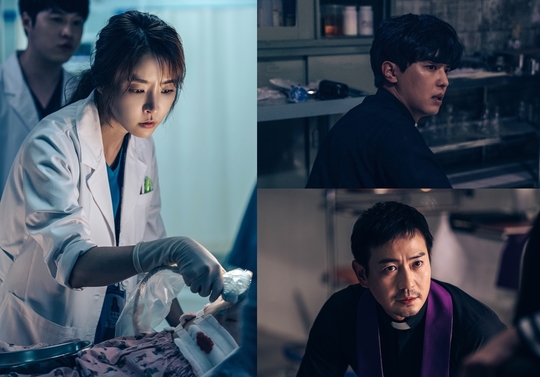 After staring at the computer screen all day, I totally read it as “Battling an invasion of evil priests” and now I kind of want to watch that!

As long as the evil priests are not zombies, I'll watch that too. lol

Sounds culty, like Rescue Me, but portraying ordinary Christianity as the true evil! 😂

Err... @frabbycrabsis is that another show? Isn't this one about priests doing battle against evil in a hospital and not that they are evil? (although after The Guest, anything is possible!!!)

I think you're misunderstanding a little, @growingbeautifully! 😂

It’s funny you mention that because this whole priest trend in dramas lately has made me feel weird given what priests have been in the news for lately in the US.

Yeah....after writing that comment I thought that perhaps it was not my eyes but rather my subconsciousness seeping through regarding how I feel about the clergy in the US. 😔

I still wonder if this kdrama priest trend isn't some weird PPL. (kind of joking, maybe not, weirder things have happened)

Stranger things have happened in PPLland!

I do think that there is no monk trend if not for the sole reason that the no show in its right mind would allow its male lead to shave his head!

This is actually in reply to @kimbapnoona

There are such things as bald caps. ;)

Although the ones I've seen in certain J-dramas look freaky. LOL

@peridot
Hahaha I don't think I have ever come across (or ever will) a K-drama with the leads in bald caps. Kudos to the Japanese for committing to the arts!

Even as a Chinese person, sometimes it is still difficult for me to get used to the front-skull shaven back-skull braiden looks for men in the Qing Dynasty as seen in period C-dramas!

I would watch that twice tbh.

Is it just me or is there a lot of priest-based things coming out lately?

Your comment made me giggle out loud on the train @kimbapnoona!

I'm kinda weirded out by the recent 'priest' trend as I'm not fan of the supernatural/horror genre, but I have a huge soft spot of YWJ so *maybe* just maybe I'll give it a couple of episodes.

On a separate note: the haunted hospital setting reminds me of British TV series Garth Marenghi's Darkplace where a portal to the underworld is opened up at a hospital. It's the zaniest, wackiest, campiest show I've *ever* had the pleasure of laying my eyes on - but I love it: https://g.co/kgs/wabifc (If you like stuff like The Mighty Boosh, this one's for you!)

YWJ made me a fan with his roles in Marriage Not Dating and Seven Day Queen, but he still cannot salvage the bad writing of Nothing to Lose aka Judge vs. Judge.😞Hope this will be a solid drama for him even though horror is definitely not my thing.

My husband is a big fan of The Mighty Boosh so we might check out Garth Marenghi's Darkplace together! We are all for zany, wacky, and campy in my household. Thanks for the recommendation @unatuna!

It is supposed to be brighter than The Guest. YJW, told so in the press meeting.

Brighter? 🤔 Oh well, at least it is action pack.

Brighter !?! Seeing is believing . I told my wife the demons are hanging out at a hospital. She shuddered.
Wife: I’m not watching it
Me: I hope it’s subbed

Me too. Getting scared is one thing but getting scared without understand anything is little upsetting. May be they will have better lighted scenes than Guest.

Perhaps lighter, as with a comedic touch ? Funny demons ? I did watch part of a J drama where Hell had a heavy metal band .

After watching The Guest, this one should be fun to watch.

Thanks @tipsymocha After The Guest, I'm not sure I want to watch another demon-infested show. I'd be inadvertently comparing the shows. I'll probably not be able to help that. Also, Yeon Woo Jin has been trapped in my mind as Gong Gi Tae in Marriage Not Dating ... just can't accept that he's a priest!!! 😂 😝

True.
I kinda compare the teasers already but I ran out of show to watch 😅😅😅
Probably a good time to finally say goodbye to the trio and welcome another gang.....?
Or maybe I'll watch the first two but if I caught myself comparing (too much), I guess I check TP after it ends.

<— Clicked on trailer, hears screams and demons.
Wife: What the heck are you watching ?
Me: Demon possession show
Wife: Another one ?

That would be fun!

Oh this is also from OCN, so cameos please from our trio.

But are we going to get any cheekbones??

I will definitely watch this, though it's got big shoes to fill (I loved The Guest, warts and all). I'm hoping we'll keep getting a steady filter of horror/supernatural dramas for a while. I saw an article for Kingdom, with Joseon zombies, and I lost my mind.

Does anyone know if this will be showing on Viki/Kocowa?

And if not there, where might we be able to watch it?

I'm still trying to decide if my love for Yeon Woojin is enough to get me to watch a horror drama for the first time ever, or this will be yet another drama I'll have to skip. It feels like for every drama of his I love, there'd be one where I have to bypass.

(At least his case isn't as bad as Lee Joongi, whose last drama I was able to finish in full was...5 years ago. My god, has it been that long already?)