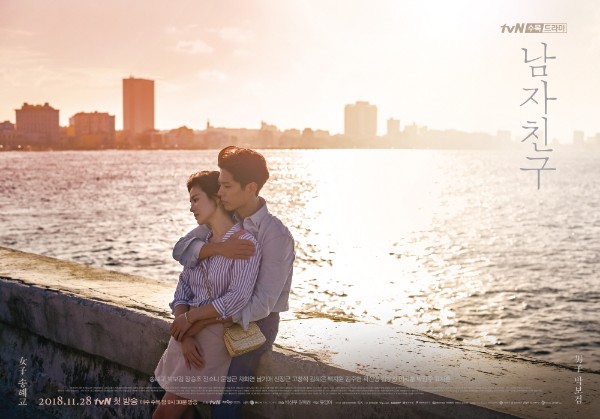 Korean dramas are great for making me want to travel to a destination I had never considered before. First there was Canada with The Lonely Shining Goblin, and now there’s Cuba with Boyfriend. A couple teasers and more posters have been released for this upcoming tvN drama, and I can’t wait!

Song Hye-gyo (Descended From the Sun) stars as a privileged woman who has been told what she should do her entire life. She meets Park Bo-gum’s character (Moonlight Drawn by Clouds), a free-spirited wanderer, in Cuba where they begin a romance of a lifetime.

The drama will explore how two people from completely different walks of life can come together and fall in love. The poster above was shot in El Malecon, a beach promenade in Havana, and it’s supposed to be one of the most beautiful sites to see in Cuba. Kyaa~! I can’t get over this scenery, which continues to be awe-inspiring in the two newly-released teasers. In this first, Park Bo-gum pensively stares into the distance as Song Hye-kyo narrates: “Let’s just say we were under a spell. Magic.”

In the next, Park Bo-gum and Song Hye-gyo are shown at their respective Cuban hotels, and Park Bo-gum begins telling the story of their first meeting on that last night of his stay in Cuba. A montage of heart-fluttering moments are shown, from the first hand-wrist grab to the sharing of shoes. Boldly, Song Hye-gyo asks Park Bo-gum, a near-stranger, for money, and he smiles asking how much she needs.

Perhaps due to how much she’s feeling attracted to him or their multiple coincidental meetings, Song Hye-gyo suspiciously asks Park Bo-gum whether he has some type of intention toward her. The copy onscreen changes from the word “fate” to “lover.” He asks back how long she’s staying in the country, and the teaser ends with the same line as Park Bo-gum’s solo teaser. 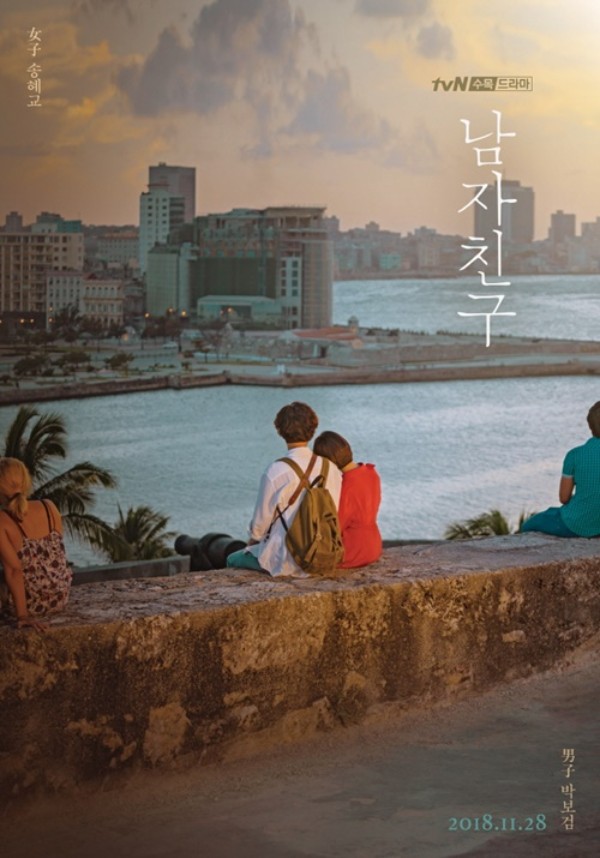 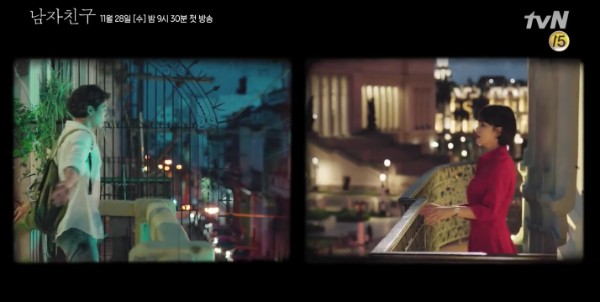 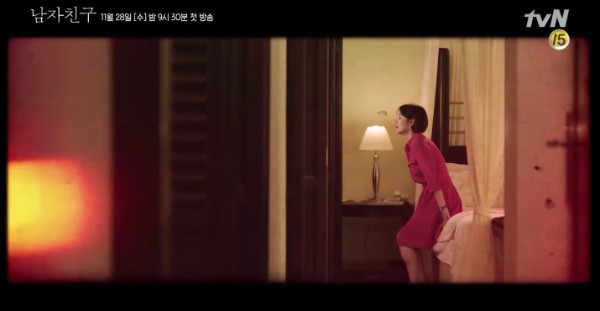 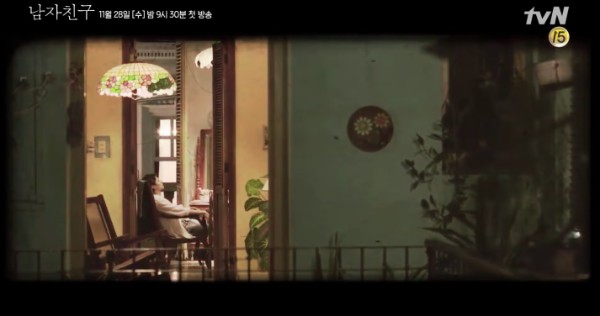 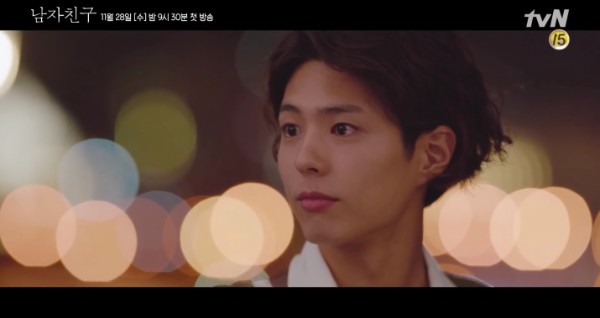 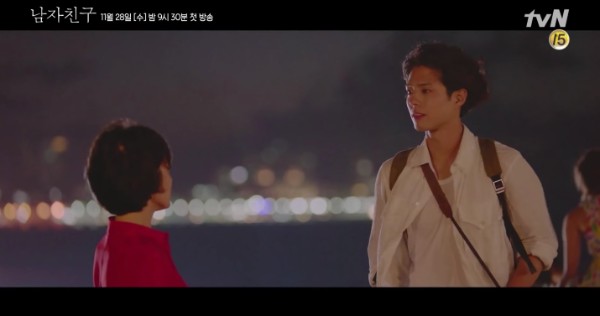 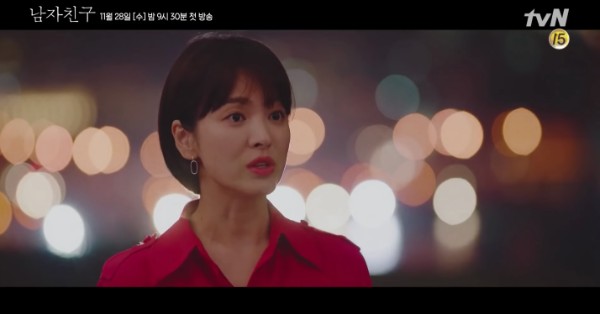 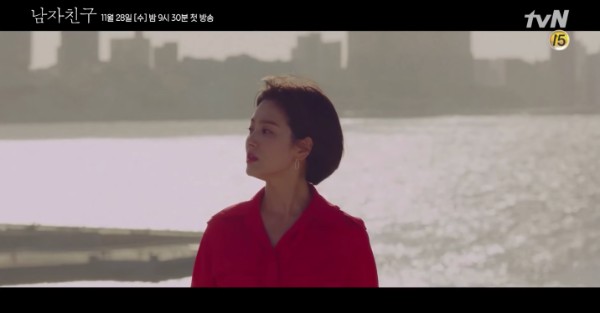 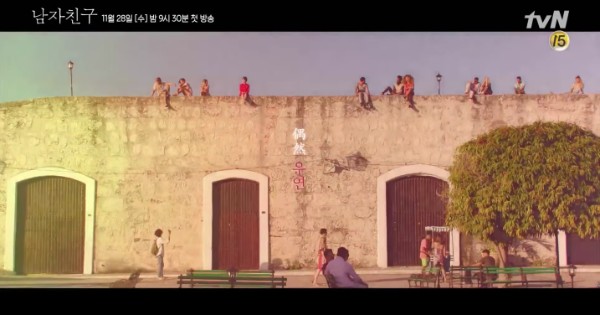 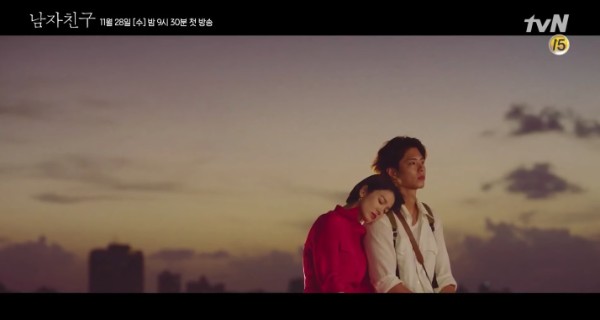 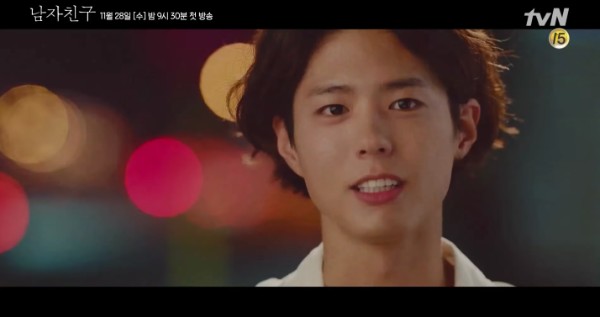 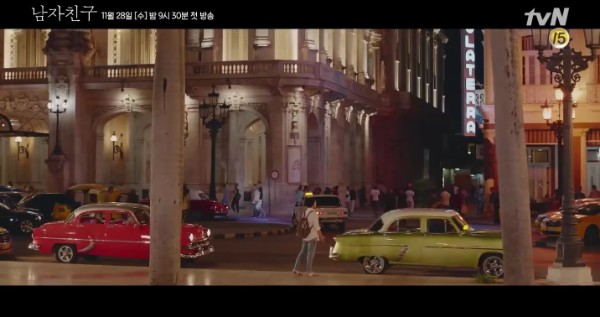 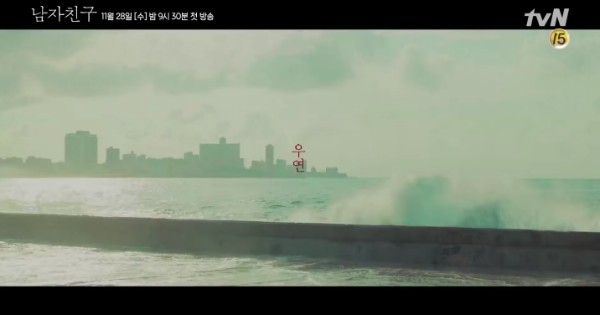 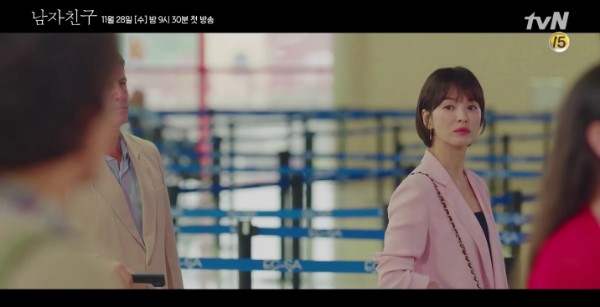 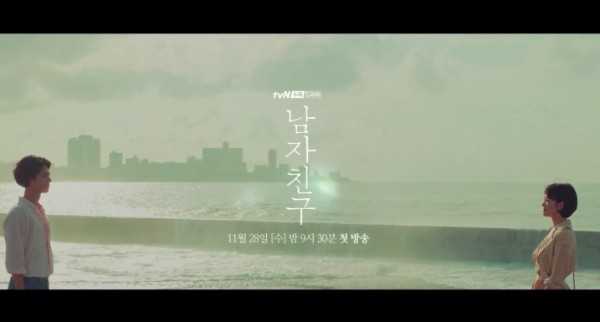 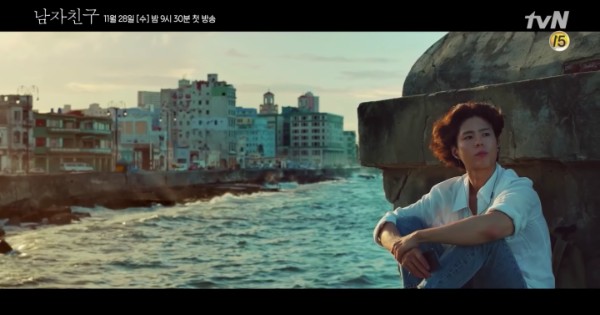 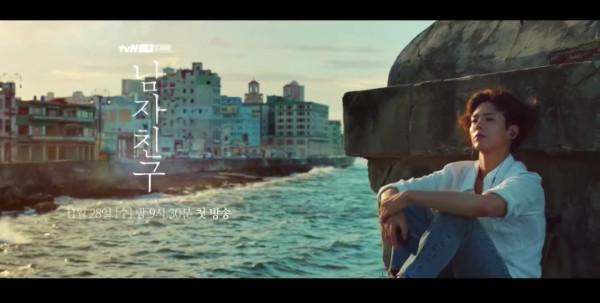 Okay, I change my mind. I like Park Bo Gum's hairstyle now. Specially the waving of the hair in the mesmerizing backdrop. So much pretty!!

The production company's massive (and pretty) campaign for the drama is borrowing technique from exposure therapy to get the viewers onboard with Bogum's hair.

Might work for you but I think he looks too androgynous, if not downright like a girl. This doesn't appeal to me at all.

yup. too girly for my taste. it doesnt help that he is baby-faced to begin with..

Cant wait ..no matter what people say bout the pairing i still excited waiting for nov 28😉😉

Whoa, this is pretty. The story could be a disaster and it might well be, but that’s not why I’ll be watching this. #imhereforthepretty.

They are both beautiful people but I’m still sceptical about their onscreen chemistry.,,

I hope I’ll be proved wrong though.

No problem with me, I’ll juat pretend that I’m the actress and imagine what chemistry that is lacking! Lol.

I’ll be mentally replacing SJK’s head for most of it.😂

And I’m here for Bo Gum. He’s so adorbs

LOL. After reading the synopsis of the plot of BOYFRIEND over at MyDramaList:
https://mydramalist.com/29722-boyfriend
I don't see how this show is going to have a happy ending.
Red alert Kim Jin-hyuk (PBG)!

For the pretty!! Say it with me, friends!

Can't wait! Counting the days.
Love the teaser and posters

I have to admit I didn't a big age gap between them. Song Kyo looks really young in the trailer. They both look great together. I have been to Havana but it's hard to believe it looks so much better on the camera. Havana has its charm but lots of building are falling apart. What a sad sight to behold!

I always thought he had a puppy face, so i was onboard with his long hair from Day -1.
But still this drama is not for me! There is something about Song Hye-Gyo I have not warmed upto. Havent liked her works.

Being trying to register my account don't know how to. Anyways am definitely watching this was a bit hesitant because of the age gap but after seeing the teaser I changed my mind. They seem to have chemistry too surprising

@ Chun, usernames and passwords have to be completely lowercase, IIRC. After you successfully register, you can set up a display name with uppercase letters. -- I hope that helps. ;-)

I am also sold! He is soooo cute!

Ooooh he's pulling off the hair splendidly.
Good luck to the team. Hope the drama turns out great

I adore the way the second trailer was shot! Absolutely gorgeous.

I'm definitely curious to see this pair on screen. Not sure if I can see the chemistry (or a plot) but maybe it will have that slow, introspective vibe I've been digging from Twelve Nights. (Though I'm not comparing the two, as the plot still seems quite vague for Boyfriend.)

Plots are always vague at the beginning, and sadly many times also in the middle and at the end, so that we have to put up with something we always say in Spanish: rice with mango 😂😂😂😂😂😂😂😂😂
But anyways, sometimes a gem can come up from a Korean writer. Let's have hope. LOL

I've realized that most of the dramas I've seen seem to have issues with a consistent plot. I tend to either really like the beginning or the end. The only one that I can think stayed consistent was Healer, but it's still not a favorite.

But we can sure have hope for the best!

Hi @nightmoon. I am also enjoying TWELVE NIGHTS having watched the first five episodes over the last week. I think it is a fine production unfortunately it airs Fridays at 11pm on a cable network so it generates tiny ratings. (It is available subbed on Viki.)
I am sorry that HEALER is not one of your favorites but thanks giving it points for being consistent. There have been many kdramas that have stumbled approaching the finish line. Two recent examples for me are YOUR HONOR and 100 DAYS MY PRINCE. I thought one of my favorites of 2017 DEFENDANT was terrific from beginning to end even with the addition of 2 episodes which often times is not a good idea.
To the subject at hand: BOYFRIEND/ENCOUNTER. I probably will pass but I wish it luck. I am not familiar with Song Hye-kyo's work at all and I only have seen Park Bo-gum in HELLO MONSTER/I REMEMBER YOU which is one of my favorites. I enjoyed his performance and his interaction with Seo In-guk. He is also in my favorite cast party pic (from HM). Here is PBG and Hong Eun-taek
Adult/child MIN:
http://i.pinimg.com/originals/c6/4b/63/c64b63ede154d32a1a99a66343233dd8.jpg

I stopped watching Your Honor at ep. 13 while it was airing but hope to continue it at some point. Like you said, I've heard the ending wasn't good at all, but oh well. 100 Days My Prince didn't really do anything for me, so I don't know if I'll watch the rest anytime soon.

I've heard great things about Defendant and really like Ji Sung. I'll probably try to get to it after I finish Familiar Wife.

The picture is adorable, though! I've only seen Bo-gum in Love in the Moonlight, so it's going to be interesting seeing him in a more serious role.

Hey! Healer is one of my favorites too!!!! 😃
But I was too cynical in my comment. There have been very good dramas out there: Mother, My Ajusshi, Prison playbook and Just between lovers were total MASTERPIECES from beginning to end.
Some slice of lives dramas like
Weightlifting Fairy Kim bok joo, A poem a day, Sassy go go and Your House Helper were also good, not very ambitious but consistent until the end.
I find tons of gems in the middle, which happy end or nice characters made me happy as well for a while, and that list is long:
- 20th century boy and girl
- I am not a robot
- Chief Kim
- Shopping King Louis
- Thirty but Seventeen
- Strongest deliveryman
... and some others I don't remember right now.
So again, to expect something good out of Boyfriend it may not be a bad idea. 😉
We will have Park Bo gum's pretty face from beginning to end and that is a wonderful thing.... unless his character will turn out like Jung Hae in's in Pretty noona.... 🤔 (I mean, I loved JHI butI hated the story at the end and his relationship with Son Ye jin, because of her character, so... I didn't even watched the last episode because it was frustrated)

I've watched several of the ones above (or have started them). I guess my problem is that I'm expecting something next to perfection and, of course, that's a lot to expect from anything. For instance, the feelings A Poem a Day invoked were those I hadn't felt before from any TV show. But by the end, it's like the writers forgot any of the other characters existed. But I still would consider it in my Top 10, even so.

Well, still hoping for the best with this drama!

It might be because both have the same hair length, I cannot help comparing the two. PBG is so young and so pretty. I now understand why my daughter told me that she wishes she can be pretty like PBG.
So far, I do not expect anything for the drama but will enjoy watching his pretty face.

Odd and Funny how no one cares when the age gap is a younger man and older woman. It’s not squiky or creepy or uncomfortable but cute ;)

I hope he will return to Korean with a new hair cut!

Hi, does anyone know which site is airing this drama in the USA with English subtitles?

wow i love that first poster

They are both beautiful, gorgeous people but the pairing seems a little off. He looks so much younger than her, I can’t see the romance. I hope it’s well written, I don’t know how much romance can they have together since they are best friends with each other. I hope it will change my mind as I watch, not sure though.

23 HANI who will remembers Ohje

Way too much pretty packed into 30s teaser XD
And agreed about kdrama making me wants to travel to certain places..
As for now, I probably wont watch it but even if I check it out, it is definitely not for the plot...
lmao

Female lead seems to be having a midlife crisis so she gets attracted to a young, innocent looking and easy-going man. I don't like these type of stories, whether it's about women or men. I think it looks pretty pathetic to expect your own life satisfaction from a romantic relationship with a young person.

Wasnt enamoured of Song and Song in DOTS and real life, but I enjoyed PBG in Moonlight.

Hoping PBG and SHK will have sizzling chemistry

Can I hope for a Before Sunrise/Before Sunset/Before Midnight kind of story? Pleasantly intrigued. Not a huge fan Song Hye-gyo, she's not terrible, but she does tend to overact. But Bogummie is my boy, so all in all worth checking out.

Do it for the Gum.

Anybody else feel the way I do? I love park bo gum and song hye kyo. Yet I STILL can’t get over that pbg is song joong ki’s best bud. I’m gonna watch this much anticipated drama...yet idk whether this weirdness will go away 😳

Aaand yup, still here for the hair. What do we need to sacrifice to the drama gods for this to be good?! Because this has to be good. pls drama gods, the slump is never-ending.