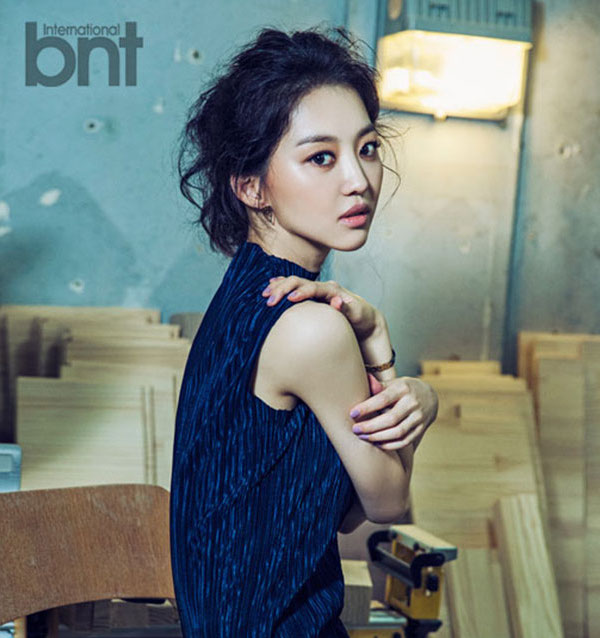 Jang Hee-jin (You’re Too Much) has confirmed to be the female lead of the upcoming drama Babel. It’s a melodrama that centers around a revenge-driven prosecutor and a former top actress who lost it all when she married into a chaebol family. Babel will show the true face of greedy chaebols through this story that contains elements of murder, power, and corruption.

The role that Jang Hee-jin is set to play is quite interesting. She’s playing an actress who became a top star with her feminine looks and married into a chaebol family. However, when her husband is murdered, she goes from former top star to top suspect. The other main character is a prosecutor whose parents die after a mysterious entanglement with a chaebol conglomerate, and he will be played by Park Shi-hoo (Lovely Horribly).

It’s great to see Jang Hee-jin in more lead roles because I thought she had always been a bit typecast as the sexy vixen character. However, after her stint on the reality-variety show Little Too Crazy, her overall public image changed to become softer, and it’s really helping her career.

From what I understand from people better informed, he's well connected and clearly has a backer. I know, it's disgusting but here we are.

Isn't he from a super wealthy family. Like, he does not even need to work.

Yeah and did you look at the premise of that drama and who his character is?

The worst part is that the drama is about denouncing the power of chaebol and the actor who raped a girl is still able to get parts because he is a chaebol. This ludicrous.

PSH's agent must be bloody good. His scandal should've ruined his career and Lovely, Horribly flopped and he's still getting work!

This sounds intriguing and a little like Misty. I like Jang Hee Jin and revenge melodramas (my fave type of melo) but PSH is a no.

Do they really not have any other actors? Is Park Shi Hoo the only person they can find? He should be cancelled and more but his career is “thriving” while someone like Yoon Eun Hye is shafted to the side bc of something less offensive than Park Shi Hoo’s scandal. Won’t be watching.

Really her new drama is operating on a shoe string budget. It's a shame. I'm not sure I thought she was the best actress but she sure did get great scripts and got to work with a lot of the best actors.

This looks interesting. I believe people can change, if you keep bringing up people's mistakes, no one moves on.

And how is the victim supposed to move on when she received no justice? I might agree with you if Park Shi hoo had served time and acknowledged that the woman in question was in no condition to give her consent, which, yes, makes him a rapist, but he was never held accountable for his actions. I'm sorry, I will not be watching him onscreen anymore. If crimes like tax evasion, alleged bullying, smoking marijuana or nude photos can require celebrities to completely withdraw from the industry, why is rape so trivialized? Go on, Park Shi hoo, rebuild your life. I do hope you feel genuine remorse and make better choices from now. But I wish you would do it out of the public's eye, and mine. Find a different job.

I think you really need to be corrected about this. The victim did get justice. She dropped the charges. Very likely she received monetary compensation. Something most victims never get. From what I can remember she didn't plan on going to the police until her friend talked her into it. I also remember quite clearly they released texts and she was rather pragmatic about. I think the media and internet blew this case up. There are a lot of Korean actors that found themselves being accused in recent years, yet, not nearly the media coverage. One of them is starring in a drama right now Lee Min ki. He was accused of rape back in 2016. So was Lee Jin wook, and even Um Ta woong. We already know about Yoochun because his rape accusation got a lot of coverage.

As far as I'm concerned, money is not the same as justice. Justice would be the perpetrator sincerely apologizing and acknowledging his guilt, as well as suffering long term consequences to his career in the public eye. There was corroborative evidence from her side of the story, as well as CCTV footage showing her inebriated state. It's hard and brave enough for an ordinary woman to bring rape charges against ordinary men, and many do drop the charges even if they are true victims because of the relentless victim blaming, the psychological wear of having to relive traumatic moments, and the sheer time and money involved in the process. All that is amplified when you have a male celebrity backed by a powerful agency. Not to mention that Park Shi hoo, with his vastly superior resources, counter-sued this woman for defamation. That's terrifying, especially if we look at your example of the way this has played out in the past. After Lee Jin wook countersued his accuser, the prosecution called for jail time for the woman and held her in detention. The circumstances surrounding LMK's sexual assault case mysterious and lacking in transparency, to the point that it's still not clear of what actions he was even accused. I feel that the way the charges evaporated were suspicious, to say the least, but don't know if I can judge due to that dearth of information. But in general, the sheer quantity of dropped lawsuits, recanting of former charges, and settlements in K-ent is just highly, highly suspicious to me. There really needs to be some kind of nonprofit set up to financially, mentally and legally assist individuals who want to bring forth charges against men in powerful industries.

Since when is rape a mistake? Did he trip and accidentally land on her unconscious body with his penis out?
Oh, oops!! Sorry!
Give us some credit for basic intelligence.

See, that sounds cool. If the two don't have a romance, I might be able to stomach this!

Scandal or no scandal, it's just too much Park Shi-hoo lately. Like, what? He's back again? So soon? Really? Do we need this? Maybe he's afraid if he doesn't keep coming back so quickly, he'll be forgotten. But that would be OK with me if it made room for other actors.

I don't think it's soon. It's been about 5 years for him.

Arw there a shortage of actors or what? And the drama sounded interesting too alas am not gonna qatch it with him in it.

park shi hoo?
thank u, next.

He should take that murdered husband's role instead.
Cause of death: While dragging unconscious drunk woman into a car, TOD appeared.
Maximum airtime: 1 sec, no need to show his face, just show speeding TOD and a grave next. And that's me being generous. And oh the girl is safe. Happy ending.

SAY NO TO RAPIST.

LOL agree completely, imo with his acting skills he would make a great dead body.

One of the very few shows on the horizon that I am really looking forward to.

I saw Park Shi Hoi is prosecutor princess and honestly he is not very interesting on screen. Rather bland and colorless, evennignorring his scandal, it's strange he keeps getting roles, he is not the best actor, no on screen charisma at all.

I didn't like him before the scandal. Didn't care for his acting or his looks. I remember he had a nice muscular body but that's about it. As for his rape accusation, that doesn't bother me at all. Personally I don't think it was rape. I followed the case pretty closely and while I know she was drunk she also didn't think it was rape. Her girlfriend had to convince her it was rape and suggest that she's get some money out of it. Which I'm sure she did. She dropped the charges.

PSH should be out of the industry, if through his connections he was able to get work then his drama should get terrible ratings (the way KHJ's did). Commiting a crime and hurting a person should have consequences. Especially dire ones so another similarly inclined person should think before he commits a similar crime, knowing that he will not be able to get away with it.

PSH to me, sadly, is not a bad actor. He has talent but that is neither a get out of jail card nor a reason for me to keep watching him. He is a rapist and should not be able to work anywhere, ever.

And I'm unhappy with the actresses working with him. If every single one of them refused to act with him, he wouldn't be able to get a role.

She must not be a top drawer actress if she has to resort to working with Park Shi hoo. I cannot see how working with him would be a career boost.

Yeah ... sadly another Drama I will not be watching. No matter how interesting the plot sounds and how great the other actors are ... once Sihoo is casted the drama automatically gets a hard pass. Sorry not Sorry, but I will not EVER be supporting this guy's career