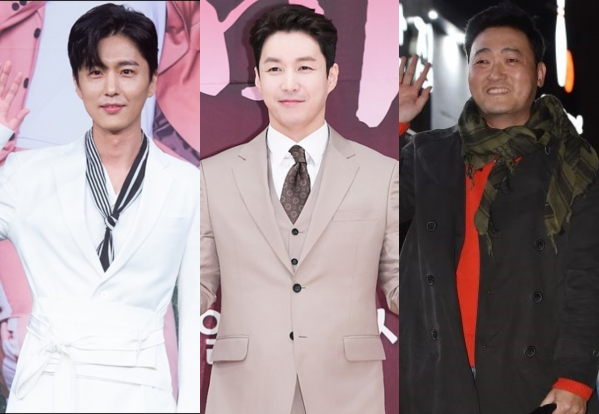 Upcoming tvN drama Reach for Sincerity has been busy filling its supporting cast to join leads Lee Dong-wook (Life) and Yoo Inna (The Lonely Shining Goblin) in the reunion-vehicle all Reaper-Sunny fans are excitedly waiting for. The legal rom-com has added Shin Dong-wook (Live), Shim Hyung-tak (Tale of a Good Witch), and Lee Joon-hyuk (100 Days My Prince), who will play two lawyers and an entertainment company CEO.

First up is Shin Dong-wook, who is steadily racking up the credits since his return to the industry following his extended absence due to his health. He will be playing Kim Se-won, an all-around “perfect” prosecutor, with the pedigree and personality to boot. He’s been Lee Dong-wook’s best friend since their law school days, and has an impeccable record, whether it’s in the studying or romance department. When it comes to his love life, he doesn’t hold anything back and sounds like the ultimate boyfriend material, which has all the women swooning for him. There has to be a catch, though, right? No one can be this perfect.

For some comic relief at the law firm this drama centers around, Shim Hyung-tak plays Choi Yoon-hyuk, a lawyer in Lee Dong-wook’s firm who specializes in divorce cases. Though on paper he reads like an ideal husband, as soon as he opens his mouth, that image falls away given his propensity to talk everyone’s ear off. On top of that, Yoon-hyuk is a complete mama’s boy, which should make for some hilarious visuals given his macho features.

And last but not least, actor Lee Joon-hyuk will be playing entertainment company CEO Yeon Joon-suk, who is described as having Midas’s hand within the industry for his ability to find successful talent. That skill is how he came to sign on Yoo Inna’s character and turned her into a Hallyu goddess, though according to the premise of the drama, he can’t keep his top stars at the top indefinitely. Personality-wise, Joon-suk is kind and generally a good man, but he turns endlessly cold and precise when it comes to business, cutting people out without hesitation if need be.

I’m excited to see how the cast is shaping up to be, with solid scene-stealers and potential second leads (looking at you perfect lawyer man). Reach for Sincerity will planning to air on tvN sometime in the first half of 2019.

OMG......Have I died and gone to heaven? This is my dream cast. And on tvN. And well after my hiatus will be over. Shin Dong Wook and Lee Dong Wook on the same set! How will they address them to keep from getting confused? How about Shindy and Wooky?

LOL Shindy and Wooky it is.

I'm so glad Shin Dong Wook is racking up such diverse credits since his return, and adding him to the cast of a legal drama makes me much more likely to tune in (maybe he'll need to do a courtroom rap). Please be good drama, please be good.

just let LDW kiss.. he was awesome in hotel king so given a free hand, this should be scorching chemistry. Plot wise i have no expectation, quite convinced it will be trite. The charm (make or break situation) is going to be whether dialogues / text can match the awesome acting talent in this drama

I thought I'd long ago exceeded my quota of legal shows this year, but now I'll gladly tune in to see SDW on screen, even if only reading legal briefs. Yeah, it's that bad...

Uhm about those nicknames, I'm flashing back to Han Solo and Chewbacca! ROFLMAO! ;-)

Huh?
Oh right, I call him Wooky, he is a old friend of mine 😂

Thank you for the update tipsymocha!

The news about this drama keeps on getting better, can't wait for it to air!

Ooh this cast is shaping up nicely.
I'm looking forward to SDW and LDW's BFF relationship and really really hope they're not falling for the same girl.
I'm still not over SDW's puppy eyes in Live (😭) and I hope he's getting his own girl
LJH ahjussi is always hilarious AF, and always makes me laugh so that's good too.

Thank you for this terrific casting news, @tipsymocha! You made my day. Shin Dong-wook has another show in the works?! Be still my heart. I'm enjoying his turn in DAE JANG-GEUM IS WATCHING as a descendant of the famous cook and physician who works as a seller of luxury cars while keeping a watchful eye on his culinarily-gifted younger siblings who are always cooking up hijinks of their own. It'll be interesting to see him as an attorney, preferably a lawful one. ;-)

Lee Joon-hyuk is one of my all-time fave actors. He was great in REBEL, LOVE IN THE MOONLIGHT, and 100 DAYS MY PRINCE.

preferably a lawful one

I would not be sad if he is a bad guy. I have a soft spot for some villains, and I imagine Shin Dong-wook could do a good turn as a shady character (dare I say, this legal rom-com could use a serial killer?).

@egads, I was thinking of LAWLESS ATTORNEY, YOUR HONOR, and MISS HAMMURABI (although the latter two were about judges, but that's splitting hairs like a Philadelphia lawyer).

I bet SDW could do a dandy villain, but for now, I'd like to see him in lighter roles. And I don't think I could survive another show with a serial killer. (I just got through THE GUEST.) Please, have mercy. Nooooo! *rocking in corner*

SDW would be a great villain, but mostly I just want him to stay healthy and keep taking roles he wants

That's exactly what I'd like, too. May Shin Dong-wook keep gracing our screens with whichever roles suit his fancy.

Lee Joon-Hyuk is a favorite of mine too! I’m sure casting directors line up to have them in their dramas.

There has to be a catch, though, right? No one can be this perfect.

Not when he's the second male lead. He can be the most perfect human being... and still didn't get the girl

Shim Hyung-tak is really good at playing comical lawyers. He played one in Let's Eat (1) and Divorce Lawyer in Love. Frankly, they were almost the same character, they could have just kept the name and considered them spinoffs. He's really a great looking guy too, not only does he look great in a well-tailored suit, they gave him a swimming scene in DLIL and he looks fiiiiine shirtless. They could call him Six Pack Lawyer Man. (I actually had been thinking of rewatching that drama; unfortunately DramaFever and not Viki had it.)

I love the sidekicks. I must watch the drama. I SHALL watch this drama( With my declaration tone, that is!) I wonder if I have ever heard American use Shall as determination verb but I love when British use it with RP intonation like Mr. Darcy's "I shall conquer this" when he was refused by Elizabeth.

... I pray that in our next life, the waiting will be short and the meeting shall be long.

That we won't need an excuse too see each other...