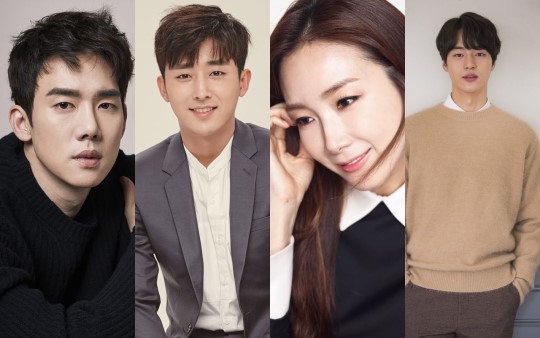 Na PD has annouced he’s launching a new variety show on tvN called Coffee Friends, which will be headlined by real-life best friends Yoo Yeon-seok (Mr. Sunshine) and Sohn Ho-joon (My Secret Terrius). The pair first worked with Na PD on the travel variety show Youths Over Flowers back in 2014. Sohn Ho-joon then went on to become a regular on Na PD’s slice of life cooking variety, Three Meals A Day.

The idea for the new show comes from the two actors’ own personal project, a charity fundraiser that they ran this past year called “Coffee Friends.” If you follow Yoo Yeon-seok on social media, you may have seen their poster several times throughout the year. 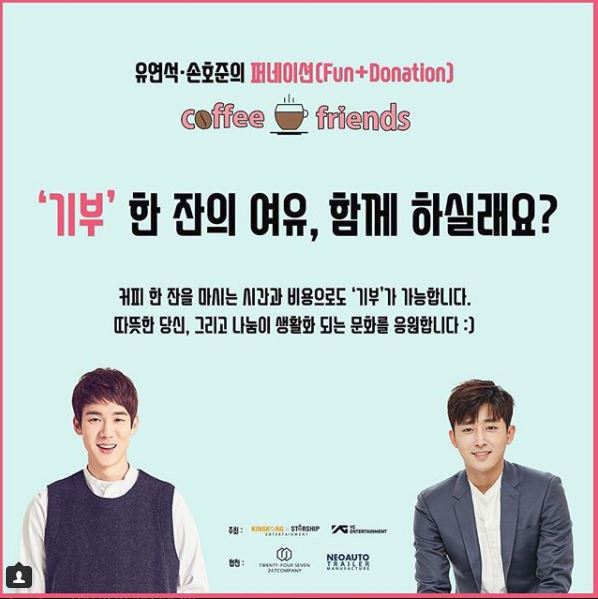 The idea is simple and brilliant. The two get a food truck, drive to a designated location, and they sell the coffee themselves. Usually, a celebrity friend or two pops by and helps them out. There are no set prices as each purchase is considered a donation, and all proceeds are donated to a charity. As a rule, the actors do not accept any personal gifts from fans on these days as well.

tvN’s Coffee Friends will be an upgraded version of the coffee truck event with a little bit of Na PD’s Youn’s Kitchen thrown into the mix. Instead of a coffee truck, Yoo Yeon-seok and Sohn Ho-joon will be setting up a brick-and-mortar café in a tangerine farm on Jeju Island. The two friends will run the café and serve brunch in addition to coffee. Keeping in tune with the heart of the original Coffee Friends project, all profits will be donated to charity.

Just like many of Na PD’s shows, Coffee Friends will be the inviting different guests to come help out. The show’s first part-time workers will be Choi Ji-woo (Most Beautiful Goodbye) and Yang Se-jong (Thirty But Seventeen). Choi Ji-woo is a familiar face on Na PD’s shows. Though she doesn’t normally do variety, she’s previously made appearances on Three Meals A Day, and she joined Grandpas Over Flowers as a luggage girl in training. Yang Se-jong has worked with Yoo Yeon-seok before (on Romantic Doctor Teacher Kim), but Coffee Friends will be his first time on a Na PD show.

I absolutely cannot wait as I’m a huge fan of Na PD’s shows! I loved Sohn Ho-Joon on Three Meals A Day and Yoo Yeon-seok is basically awesome in everything. The timing couldn’t be better as well. I just watched the last episode of the most recent Journey to the West earlier today and was wondering how long I would have to wait until Na PD’s next show. Let the countdown begin!

PD Park Hee-yeon, who’s previously been part of Na PD’s creative team, will direct and and Na PD will be taking the role of creative director. tvN’s Coffee Friends is currently scheduled to premiere next year in January 2019.

All of Na PD’s “guests” have Stockholm Syndrome... 🤣

I was wondering what Na PD's next project would be. And thought he would go with Youn's Kitchen or Three Meals A Day. This is one is new! In terms of casting and this time it's beverage/drinks. Can't wait!!

*JAW DROPS* I’m in. @kdramaswimmer, I’m sure you are too.

absolutely in... anything for YYS.... 2 more months to wait but ill survive...
thanks for mention Ally.

To clarify... Coffee Mate is a whole other thing.

6 egads aka Dame Maggie with a heart of coal

I don't usually watch variety, but I like this concept, and the cast isn't too shabby either.

The coffee truck that Yeon-seok and Ho-joon are running is a brilliant idea. I'm so happy they thought of helping charity in such a sincere way.

I see Na PD show and i know i gotta watch it...Love the cast and i'm quite anticipating to see Yang Se Jong in a variety show...

First impression after reading about this new show left a bad taste in my mouth, tbh, because they're taking something that originally had such sweet intentions (2 BFFs doing something they enjoy for the benefit of a good cause), and TvN is trying to make money off of it.... But then it says that all profits from sales will be donated to a good cause..... That does mitigate my annoyance a teensy bit, but not very much, because that part of this whole entire show just seems like such an afterthought :( We'll see how this goes...

@bebeswtz, that is a fair point... I think it helps, a little, that Na PD has already made similar shows (like Youn's Kitchen), albeit without the fundraising, but it at least shows some continuity? And they aren't just coming out of nowhere solely to capitalize on this idea. Hopefully the show will raise more awareness to the general public about how easy it can be to donate money to a good cause, and the importance of doing it, which I think was the point of the original Coffee Friends project. 😊

Oh... At first I thought they were going to do a drama together, so I got really excited. On the other hand this variety show sounds fun as well and has great cast.

Isn’t it funny that Sohn Jo Joon last character (Terius Behind Me) also ran a coffee shop in Jeju? 😀

Can’t wait to see Yang Se Jong on a variety show! The guy is so shy and awkward off screen 😂 This is going to be awesome!

My first thought is Yoo Yeon-sok ran a restaurant in Jeju in Warm and Cozy, so this is the boys living out their characters indeed!

12 Katakwasabi is waiting for Royal Hotness new drama to air 😎

Yay! More son ho jun please. Him with his bestie YYS is even more awesome! Now maybe if Na PD can rope in his other bestie Yunho that would be great! Hahaha

Fun tidbit: SHJ has a barista cert, YYS has a trailer driver license. So YYS drove the trailer and SHJ made the coffee in their Coffee Friend project 😊

I bet Na PD is gonna mix that up though. He's gonna stop SHJ from making the coffee because that would be too easy. XD

Na PD definitely like that since he didnt have to spend money sending them to get cert/license. It's like 1+1 deal to him 😆😆😆

Oh yay! Super excited to check out this new variety show by Na PD. I love his variety shows as well~ I'm also curious to see how Yang Sejong will be in the land of variety bc he doesn't do that often or does he? I can't remember seeing him in anything. lol

As far as I know, he never appears in any shows since debut 2 years ago (only radio programs). He has already been in 5 dramas within 2 years.

I'm not the biggest reality show watcher, but some can be quite good. I'll watch the first episode since I'm a Yang Se-jong fan boy. So I might end up getting into the show because of that.

Yes, yes you are.

That I'm a YSJ fan boy or that I will end up getting into the show?

We will revisit this discussion in a month or two I suppose.

Anything with Na PD, I'm in.
I actually thought they will film Kang's kitchen while making an arrangement of sending Jiwon and Soogeun to Iceland. Dunno why I think that way tho. They won that aurora trip right? and Soogeun win cruise trip too 🤣🤣🤣🤣 That's 2 show already. I'm pretty sure Na PD wont let it go as reward without turning it into variety show.

But a new show with new cast? Yeah~ I think it is safe to say that we probably will get 2 season from them. Hojoon is basically on Na PD victims list already, so 😆😆😆YYS about to get in that list too. And cant wait to see Yang Sejong in variety.

i don't know about anything else.. but i know for sure that Na PD's celeb crush is Cha ji woo.. he literally becomes a fanboy in front of her

Count me in! I love the cast and getting CJW and YSJ is a bonus. I love SHJ and YSJ. YYS is not bad too but the only show I saw him on is Warm and Cozy, so can definitely see him in this.
Also SHJ had a crush on CJW when they both guested in Three Meals A Day so would love to see the dynamics when she gets to be a part-time worker for the guys.

YYS has worked on youth over flowers and more recently on busted with Yoo Jae sook, but busted was weird overall

YYS is in busted? Now i have a reason to try to watch it on Netflix 😂

OMG, super excited for this! You had me at Na PD!

And these two best friends are sooo adorable together! I especially love Son Ho-jun after R94. I'm suddenly recalling their YoF trip, all the skinship and the sweetness. ♥

YAAAY! It's only been a month after I watched AM94 and Youth Over Flowers, and I cannot think of a pleasant surprise more well-timed than this one!
Does this mean DB will re-launch the variety recaps too? I loved those!

I like the coffee truck idea much better than the tangerine farm. Seems like a more controlled less spontaneous environment. Oh well, the guys are darling. I've never seen either of them on variety much so it might be fun.

What a fun idea! I love Yoo Yeon-seok and even though I just discovered Sohn Ho-joon (I watched him for the first time in My Terrius and then Go Back Couple just this month) I have fallen in love with him also. He is an excellent actor. I hope this works out for them!

"I absolutely cannot wait as I’m a huge fan of Na PD’s shows!" ditto
First love his ideas in 1n2d season 1 and the rest is history. I love all PD Na's show-:)

I just started watching the show. When I saw the first episode, I saw them making the spread. Oh! Is that our Kaya ( I am Singaporean 😋) than it was mentioned to customers that originated from Singapore. Having the fresh tangerine in the Kaya I am sure it is delicious 😋really wish I could try the Kaya you guys made. But I that not possible. And on the charity donation 👍👍👍 with no price on the menu 👍