Three teasers for The Man Who Became King 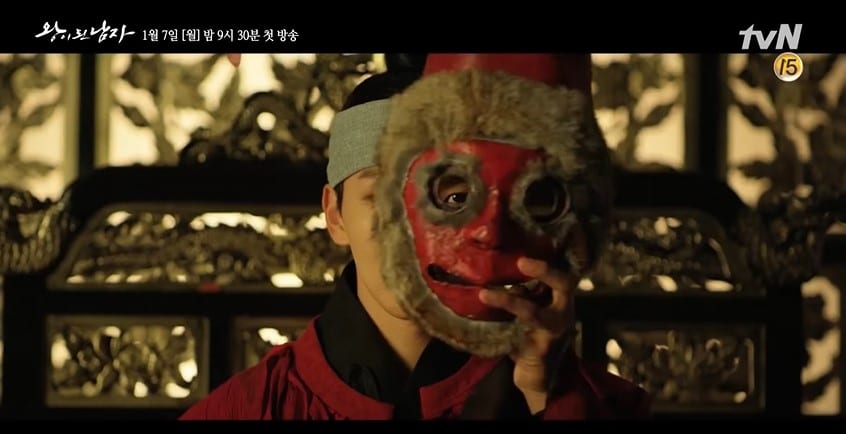 The story is a remake of the film, Masquerade (also known as Gwanghae, the Man Who Became King) which broke Korean box office records when it was released back in 2012. The drama will similarly center around two men: King Yi Heon and a clown named Ha-sun who happen to look exactly the same as the king. Ha-sun is initially used as a pawn, secretly disguised as the king to be his decoy, in order for the true king to conceal himself from his enemies. However, tensions arise as the story starts to question who really should be sitting on the throne.

The three teasers use similar shots, but are edited differently to tell the story from slightly different perspectives.

The first teaser is King Yi Heon’s version. In voice-over the king desperately decrees, “Find a way to protect me… before I really become crazy.” With ominous music in the background, we’re shown a fearful King Yi Heon sitting on the throne in a cold blue room. A dancing Ha-sun approaches in red; Yi Heon becomes resolved as he moves towards Ha-sun while drawing his sword, and the scene ends with Yi Heon wielding his sword at Ha-sun face-to-face.

The second teaser is the clown Ha-sun’s version. The music is dramatic and orchestral as the character narrates in voice-over, “I think I need to become the real king.” We see Ha-sun dressed in his red costume and mask, boldly dancing as he approaches, and  Yi Heon quickly unsheathes his sword. Ha-sun then theatrically sits on the throne as if falling into it, with his mask still on. The teaser ends as Ha-sun slowly takes off his mask and stays seated at the King’s throne.

The third is a combination of the previous two teasers. It starts with Ha-sun putting on his mask with ominous music, like that of the first teaser, in the background. Ha-sun dances as he approaches the apprehensive Yi Heon. The music then starts to change, mixing in some orchestral notes, as we hear Yi Heon’s same narration: “Find a way to protect me… before I really become crazy.” Yi Heon steely walk towards Ha-sun as he brandishes his sword. The music becomes more dramatic and we hear Ha-sun’s voice-over: “I think I need to become the real king.” A horizontal split screen shows us the two men crossing over to each other’s side, signifying the “switch.” Ha-sun then sits on the throne, takes off the mask, and the teaser ends on Ha-sun’s pleased face.

At the end of all three teasers, Yeo Jin-gu voices, “tvN’s The Man Who Became King premiering January 7.”

I was pleasantly surprised to hear how Yeo Jin-gu voices the two characters differently, even though it’s just two short lines. I don’t know why I didn’t expect it since this is Yeo Jin-gu after all. He’s truly one of those rare gems, naturally gifted, but often wasted in not-so-great shows like many other good actors (*cough* Lee Jun-ki *cough*). I’m really excited about his pairing with Lee Se-young as well. She’s also been in the industry forever, having been a child actor like Yeo Jin-gu, but for some reason was always under the radar a bit. Here’s hoping 2019 will be a good year for lots of good shows! 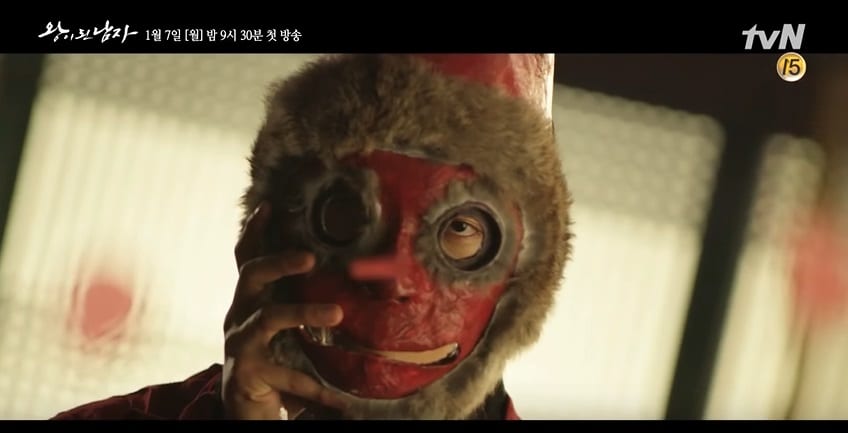 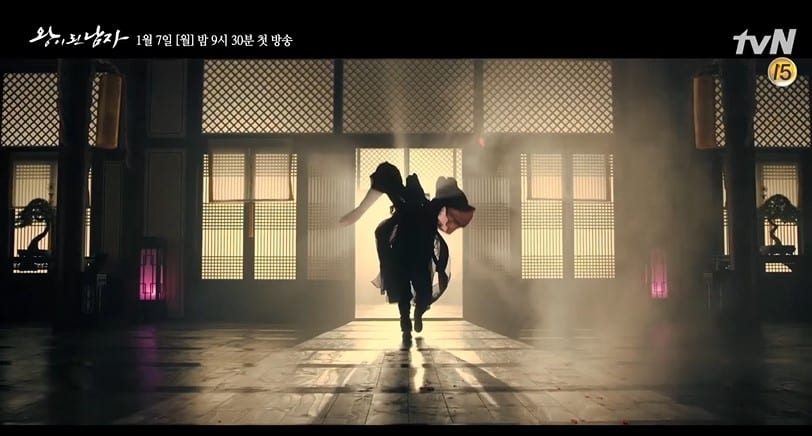 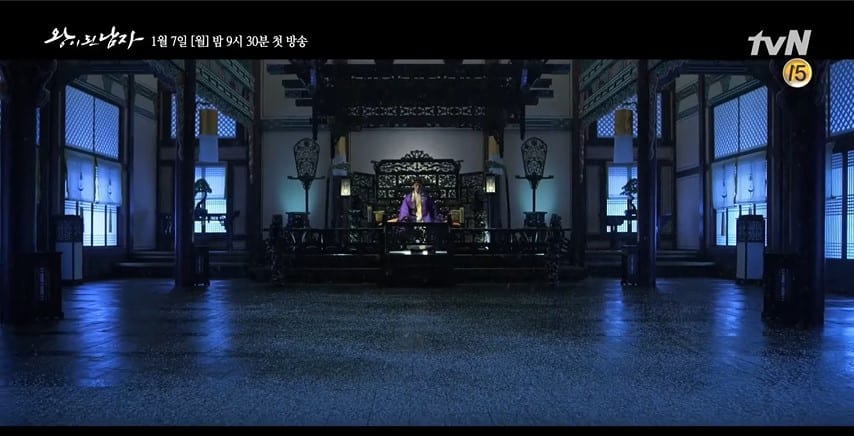 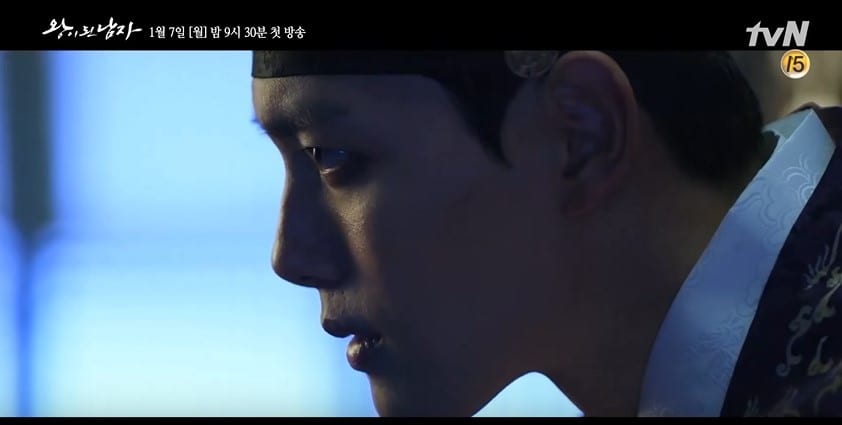 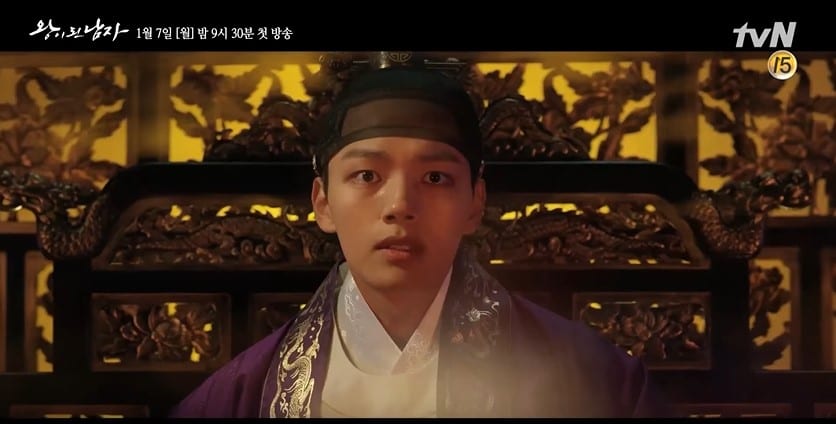 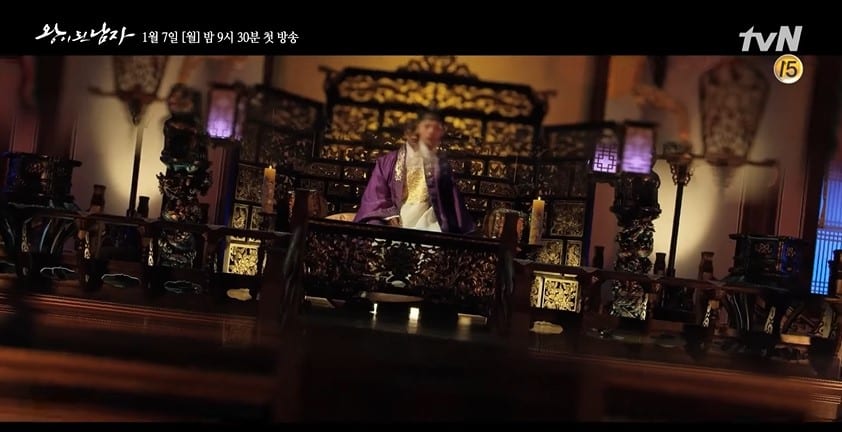 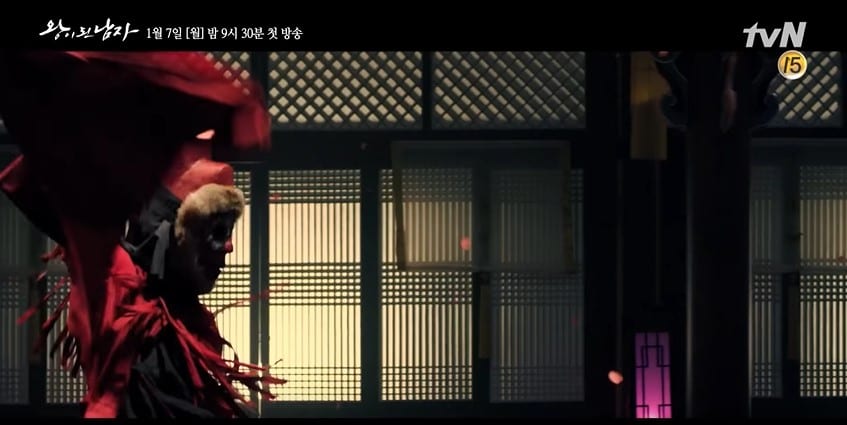 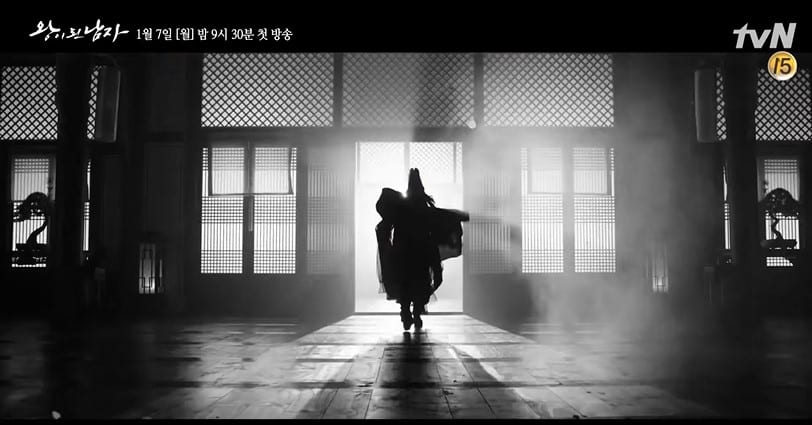 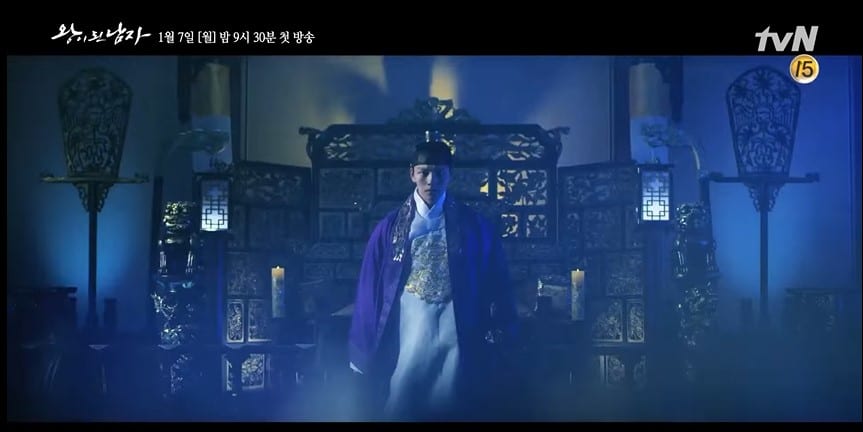 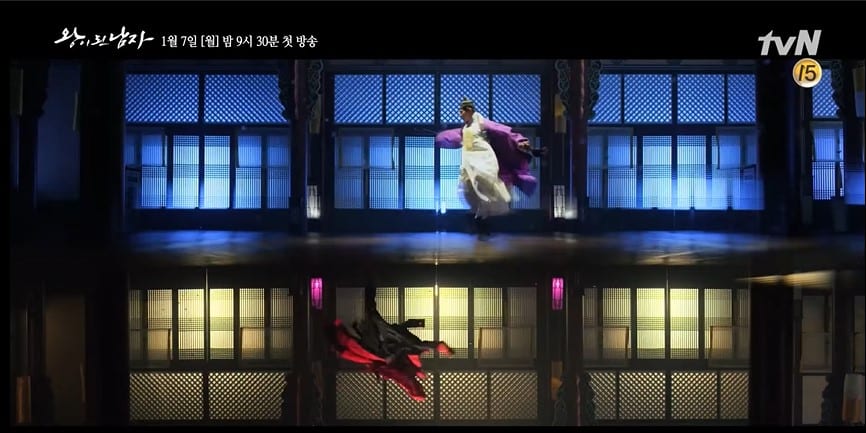 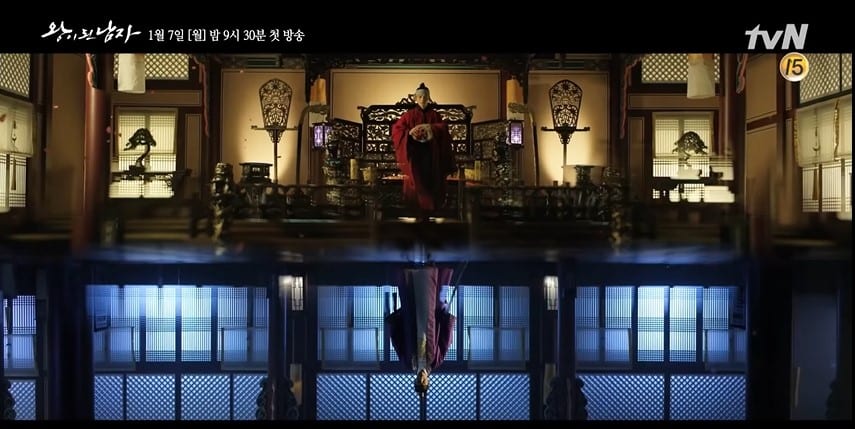 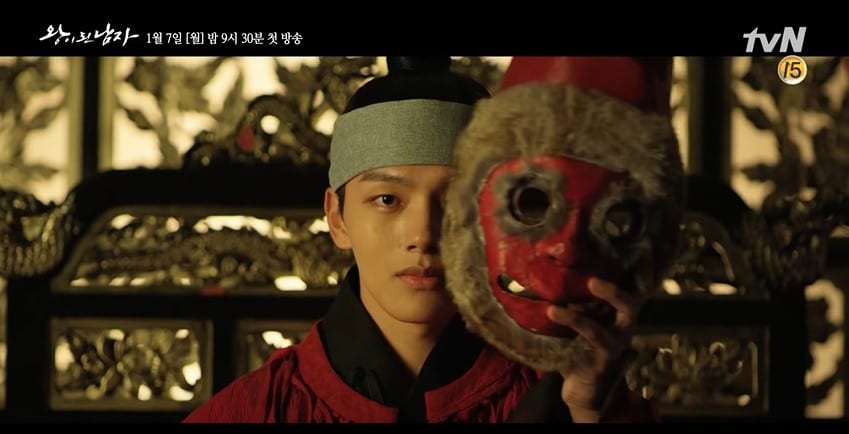 Right? Like, I already expected Yeo Jin Goo to utilize his voice really well for this drama, but to finally witness it in the teasers got me hyped more than ever. Even the way he read the airdate schedule in the two character teasers, he made a subtle change with his tone that allowed you to differentiate the two characters perfectly. Here's a mini clip I did putting the two clips together: https://twitter.com/circulate9oo/status/1071575493491585024?s=19

I totally can't wait! I've been waiting for this drama since forever, I hope it delivers!

And let me just say... these teasers are sooo gorgeous! You have Yi Heon in cold snow, Haseon in warm spring roses. The colors set the tone so well. 😭 I can't wait till January 7.

circulate. circulate 3. are you here to make me cry after I've just finished Circle??

I've watched Circle more than a year ago and it still gives me so much feels whenever I think about it. :'(

2 bebeswtz❣️Xiao Zhan is my happy virus

In Masquerade, it was the Clown and he was pretty funny. The eunuch and the secretary were nice characters. I'm pretty excited to see this drama !

Yep the secretary and the eunuch were awesome characters. Haha I loved when the secretary was not fazed by the clown's resemblance to the king and just scolded him like any lowly subject 😂 On the other hand, the eunuch served and addressed the clown as if he's the king. The king's personal bodyguard was another scene stealer.

Yeah, I loved how the Eunuch helped the Clown to become the King. The bodyguard was a great character too and the young girl who made food.

The end of the movie is kind of bitter.

If the show is anything like these incredible teasers I'm all in. Gorgeous lighting and camera work. Also, I liked the original film a great deal. Can't wait to watch it!

Yeo Jin-gu in a sageuk is always a win because no matter how crappy the writing or directing maybe, he knows how to make his character believable and memorable.
I don't love all of his sageuks but I do love every single character that he played.

I know teasers are called ‘teasers’ for a reason... and let me just say THESE TEASERS have done more than what they’re expected to do!!! I want to see it NOW!! 😱 I can’t wait... 🥴 I’ve seen the film but.. and though they’ve made similar shots (as mentioned) I somehow expect Yeo Jingoo to mark the characters as his own.. as he always does! Thanks Dramabeans for doing such a detailed review of the TEASERS.. my heart was pounding while i was reading through it.. now i have to figure out how to stay alive watching the drama! 😅😅😅

Thanks for the teasers, @tccolb. A month to go, and now I'm even more impatient for the premiere of THE MAN WHO BECAME KING. ;-)

Wow, that analysis @tccolb! I haven't seen the film so I am going into this with no previous knowledge (except that Yeo Jin Goo is amazing, but that's common knowledge). Yay for January 7th!

Great writeup and awesome use of the lead photo, it took me several tries to be convinced that was actually YJG's left eye showing in the mask - creepy!

Same here 😆 Took me a few seconds to figure out the image properly.

It’s been FOREVER (a year?) since a good sageuk has aired so I’m really looking forward to this one! And Yeo Jin-goo can pull of anything. What a talent. Gah! Can’t wait!

It’s always pleasure to watch YJG, Circle was a great show of his. This looks promising too, I hope it’s even better.

Yeo Jin Goo, my good sir! I just finished watching him in Circle (daebak x1000) , so, hearing that this drama will come out soon, I'm excited! I've heard he's played a lot of royal roles? This is just another addition to the list, I see.

Wait....wasn't ruler master of mask something like this too? Correct me please if i'm wrong

I’m intrigued, seems like this could be a very good drama. Loved the use of colour to help differentiate both characters, I’m curious to see how this will translate into the drama. These teasers have definitely worked, can’t wait for January to come so I can delve into this story!!!

The movie was a crazy comedy, I loved it!
I'll try this show and see if it lives up to the name..

This has potential. I liked the movie.

As per Asianwiki, the director is Kim Hee-Won.
She has directed Money Flower, Glamorous Temptation, (watched these two), Golden Pouch, Warm and Cozy.

Man! Does this look amazing!

It isn't the little kid from Iljimae anymore...