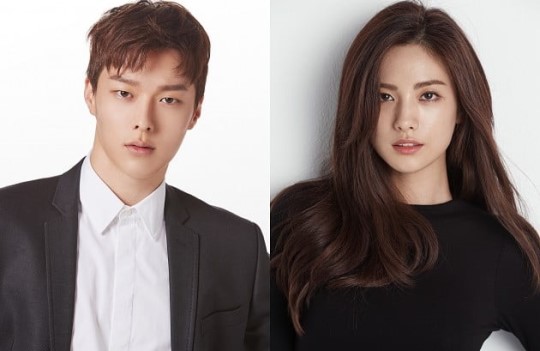 Actors Jang Ki-yong (Come Here and Hug Me) and Nana (The Good Wife) have both been confirmed for new OCN drama, Blue Eyes.

The story is a melo-thriller about a hitman entangled by fate with a police detective in a “neither can live while the other survives” situation. Due to the circumstances, the hitman has to kill in order to find his family. At the same time, he’s being tailed by the detective who has to catch him in order to uncover the mystery surrounding her boyfriend’s death.

Jang Ki-yong will play hitman Kim Soo-hyun. The best in the industry and skilled with weaponry, he handles weapons with ease and possesses the versatility to turn anything on his person into a weapon. He’s a quick thinker with fast reflexes and also skilled in concocting the most perfect of plans to take care of his targets — then disappearing like a ghost. His ethnicity, age, and name are all unknown to the world, but he’s sought out by gangs or organizations to handle their most intractable foes. Although he doesn’t concern himself with society and is awkward when interacting with people, he holds a hidden longing for human affection.

Nana will play Detective Do Hyun-jin — the ace among the detectives on the investigations team. Competent and hard-working, she graduated from the police academy at the top of her class. She puts a lot of trust in her instincts, having excellent intuition, but also understands the need for a rational approach in decision-making. Though Nana’s character can’t bear seeing injustices, she isn’t a harsh and unbending person. She’s the kind of person who good-naturedly turns a blind eye to white lies. To others, she comes off cold and haughty, but she’s actually quite sensitive to other people’s feelings and inner pain.

Directing for Blue Eyes is PD Nam Sung-woo who most recently worked on 100 Days My Prince. Writing is credited jointly to Sohn Hyun-soo and Choi Myung-jin.

It’s nice to see Jang Ki-yong steadily building his filmography. 2018 was a good year for him and hopefully he’ll continue to rise in stardom in 2019 as well!

OCN’s Blue Eyes is currently set to air later this year in March 2019.

Welp, Jang Ki-yong is probably about to ruin my moral compass.

I just laughed out loud to this, #facts

Gulp, my lack of moral compass is probably the reason why I love anti-heroes.

More OCN dramas with prominent female characters are always welcome. I hope this is a good role for Nana. I've never seen her act but loved her in After School and Orange Caramel, and I remember seeing good comments about her acting in The Good Wife. I also felt bad for her when the whole production of Four Men ended up being such a disaster. Here's hoping this is a good experience for her! And I like Jang Ki-yong as well, so I'm excited for this! And I usually have no interest in crime dramas!

SO just because he have a reason for murdering other people there is no way to justify it. even if they are scum. It is gonna make him just as bad as the other scum... I am no way being negative to the actor, but to this character. want to make that clear!

Jang Ki-yong in another melodrama, so he's a melo king now? He's going to be cool as an anti-hero lead.

You know, it's nice that Jang Ki-yong went for a lighter fare after Come and Hug Me.

Lmao, this thread is on fire.🤣

Dramas really have a very terrible way of making me sympathize with murderers.

Yeah, but don'tcha know they must have had a tragic childhood.

Ahhh,so happy to he Jang Ki Young,my crush right after Yoo Seung Ho on my tv again and not to mention on OCN....The character made me thing of Healer but less bloody jjajja...Happy seeing him get a lead role and starting to make a name for himself...Hope he accepts the other one as well,one show isin't enough!!! Just hope the writer will deliver a great story!

Well, I didn’t NEED another hot serial killer in my life, but you know... I’ll take it. 😏

@jenmole, come collect your son before Coco puts him in her treasure chest.

Whew....I was worried that the hot serial killer would be the one to bury Coco in his!

Bury me in your chest oppa

@bammsie the treasure chest is made for sharing, I've never been one to hoard my oppas.

In that case, *bows out*

Give him my love.

Hehehe I like "Bury me in your chest, Oppa!" much better.

Would THIS chest also be available for sharing?

*rolling* You have the Emperor's already!

hehehe @bammsie, I dream of a Oppa World that is firmly rooted in polyamory.

Oppa, let me bury my face in your chest while we hide ourselves away in @hotcocoagirl's Oppa Treasure Chest for our 7 minutes in heaven!

@kimbapnoona I'm supposed to be going to bed. So I shouldn't open my treasure chest.

I almost gasped that you put more hearts than you have in your handle name for Winner, but then I remembered that Winner has 4 members, and ya can’t split 5 for 4. *slinks away*

The extra heart is for you Bams. :)

(This is fine, I'm just rehearsing my role as Elphaba for.. future use..)

Also I am expecting Frank Sinatra aka Ol' Blue Eyes to fit into this plot somehow. Don't disappoint me drama gods.

I almost wish you wouldn't post stuff that we can't see until March! Though time passes quickly. This is the kind of drama I like - maybe 2019 will be a good year.

these two look good together and will rock their roles, i think! been waiting since The Good Wife to see Nana in another role...

Where can I watch this???? When will Viki start carrying OCN dramas again???? I'm bereft. I can't bear to miss Jang Ki-yong's next drama!

And another drama with a plot that screams: don't watch me, don't watch me...
I am grateful. Not joking, I am always grateful for things I am not inclined to watch because that makes special the few things I watch, like "Encounter" 😅😍😅

I watched a short drama on a Rabbit watch together with (if I remember correctly) @greenfields and @hades that had a remarkably similar plotline...

Hmmm...the only one that we watched together that I can think about that's close enough to this one is Long Time No See. It's a bit different, but I can see where you're drawing similarities from. Funny enough, there is an upcoming drama that might to much closer to this one called HIStory3: Trap. I'm sooo looking forward to that.

Maybe it's only similar in my head because at first I thought the other guy was a cop (until - plot twist!)

Ohhhh. Did you!? Hmmm...that's would have been really interesting if he turned out to be, thinking about it.

We did watch one of the HIStory's as well, I think?

That we did G, HIStory2: Crossing the Line. Did I tell you they're making a sequel in the form of a movie? It's coming out at the end of the year! I'm so excited for it.

Wowow.. Jang Ki Young is on a roll... He is really suit this kind of character...and excel at it.

100 Days My Prince was a mess that heavily relayed on the cute of the three main actors. It was pretty but nonsensical. Hopefully, the writers are better in this one.

Yes the writing was terrible and I'm not looking forward to anything that involves this writer.

I thought Jang-ki-yong gave a wonderful performance in COME HERE AND HUG ME.
Here he is with his MBC Drama Award:
https://www.instagram.com/p/BsDrrshn6IJ/
I am definitely in for BLUE EYES.
One of the projects he is supposedly working on now is BAD GUYS: THE MOVIE. I can't find out anything about the status of production other than filming began Sept. 10, 2018 (here):
https://en.wikipedia.org/wiki/List_of_South_Korean_films_of_2019#To_be_released

It could be a reference to The Who's iconic Behind Blue Eyes (covered famously by Limp Bizkit) about the tortured inner life of a man who appears to be cold on the outside but sees himself as a good guy inside.

Just found this report after today's announcement of the premiere date for KILL IT. "Behind Blue Eyes" was the first thing I thought of when I saw the erstwhile working title, too. But somehow I didn't think of Frank Sinatra. ;-)

Ooh neither did I.

22 YY Chats with Toast Between Bites

There's a new drama in the works.

Blue Abs
A man wakes up one morning and discovers that his abs have turned blue. Main lead: Choi Jin Hyuk

Really liked Jang Ki-yong's performance in Come and Hug Me, so this will be a must watch for me. The premise kind of reminds me of Healer, and that's definitely not a bad thing.

Also, really hoping for a great female lead. Seems like they've been hard to come by lately (at least in the dramas I've been watching).

ufff the visuals for this drama! They make a gorgeous pair.

So we making Healer 2.0, this time with murder. Cool. I watched Jang Ki Young in Go Back Couple and I adored him. It's also nice to know that at least YG's actors are not holed up in the dungeon

Nana surprisingly a pretty good actor. And i love her..
I had my eyes on Jang Ki Yong since IU's MV,,and I knew he'll go far..
Exciteeed!!

I am concerned that some beanies are segueing BLUE EYES into a sort of HEALER 2.
I imagine HEALER 2 as part of dual sequels. When Lee Min-ho and Ji Chang-wook are discharged from the Army I would love to see them work together in HEALER MEETS CITY HUNTER or (if you prefer) CITY HUNTER MEETS HEALER. A can’t miss!

Recently started watching Come and hug me and I have to say that he is really good in these action/tortured/killer roles. Story reminds me of Healer as well and he reminds me of ji Chang wook ahahha. Looking forward to it.

Pretty couple 😍 Not sure about the script. Good luck ! Fighting !

I love both actors. Saw Nana's performance in Good Wife drama and she did an amazing job. Also i've watched Jang Ki-yong in Go Back Spouses and it brings back the feelings of the 2nd lead syndrome that made you root for.

I guess it's worth checking out .