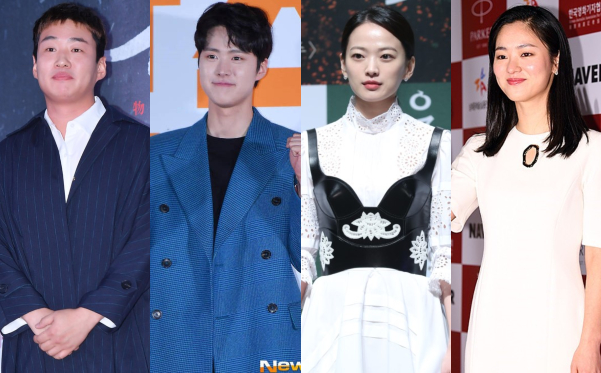 Director Lee Byung-heon is currently riding a huge wave of success for his film Extreme Job, which is breaking records left and right, and is currently standing at the second-highest grossing film in Korean history. Which is why there’s understandably a lot of buzz surrounding the director’s first foray into dramaland with JTBC’s Melo Suits Me. The rom-com is still in the casting phase and has most recently sent offers out to Ahn Jae-hong (Fight My Way) and Gong Myung (Extreme Job).

It’s still early days yet, so we don’t have much information regarding the specific characters offered to the two actors, but we do know that the show will center around three girl friends in their thirties, who share everything about their work and love lives. It’s pretty much as generic as you can get in terms of synopses, but I’m always up for a female-focused show, and a rom-com at that. There are also offers out to Chun Woo-hee (Argon) and Jeon Yeo-bin (Live, Save Me) to presumably make up two-thirds of that main trio.

All the actors are in that “positively considering” stage, but hopefully, we get some confirmations soon since filming is scheduled to commence next month. It’ll be interesting to see whether director Lee Byung-heon will be able to bring his signature form of comedy into this new format, and whether he’ll be able to reunite with both Ahn Jae-hong and Gong Myung, who starred in his films Twenty and Extreme Job, respectively.

Melo Suits Me is slated to air on JTBC in the latter half of this year.

I love THE SCANDAL MAKERS and SUNNY. He was the writer so comedy is definitely his thing.

I hope indie darling Chun Woo-hee will accept this. I don't know much about the rest of the cast except for Ahn Jae-hong who looks a lot like Cha Tae-hyun.

PLEASE! I would love for these boys to be headliners together - it's so opposite to the kind of pairings you tend to see.

I want to see much more of Chun Woo-hee on the small or big screen, I'm not picky! She made such an impression on me in The Piper, The Wailing, One Day and of course the devastating Han Gong- Ju. Talented and I think absolutely breathtaking

She won so many well deserved awards for HAN GONG Ju. I cried with her when she gave her speech.

Ooh yes!! I’ve watched all the director’s movies and I’ve enjoyed all of them. And I’m always down for shows focused on women.

The cast is shaping up to be great too! I really hope Chun Woo-Hee accepts, she’s brilliant. And I’ve been into Gong Myung since I saw Individualist Ms. Ji Young!

I gotta find out when Extreme Job is gonna be out the theater bc everyone is talking about this film.

It's not in any theaters by me. I searched 10 different theaters and not a single one is showing this. And then a general search for the movie in a theatre by me showed a 'We're sorry' for the major theaters in my area. Sadly, my area doesn't typically show many foreign films so I have a very hard time finding a way to watch Korean films 😔

I can’t take these 2 guys seriously so I guess rom-com is the way to go.

Gong Myung is a good crier, even though he opts for more light-hearted roles, and he did a convincing portrayal of a hard-trying boyfriend in the drama special "Individualist Ms. Ji-young".

I'm having high expectation! Although I haven't seen "Extreme Job" (planning on this weekend), but I love "Twenty" and "Sunny"! Hope the casts will say "YES!"

I wonder if Chun Woohee is gonna be paired with Ahn Jaehong because they played friends in a web drama, "Remarkable". She thought he was going to propose to her on live television but it was for his secret girlfriend. It was also the drama that made me see Ahn Jaehong as the handsome guy, instead of his usual quirky characters.

I hope he is! I think he's quite a versatile actor, he was like my favorite brother in reply lol. It would be nice to see him 'not' play a caricature-ish character for once.