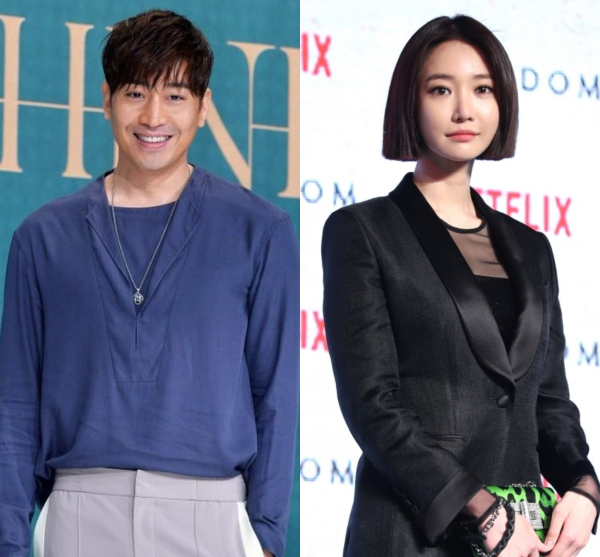 If they accept, this would definitely be an interesting lead couple. There’s a new drama in the works over at KBS titled Perfume, and both Eric (Oh Hae-young Again) and Go Jun-hee (Untouchable) have been offered the lead roles. Both are still in the considering phase, but it would be nice to see Eric back in dramaland after a three-year absence.

The title of the show is a little touch on the nose, and will be about a magical perfume that brings back youth to its wearer. So, basically, the fountain of youth in a bottle. The role Eric has been offered is that of a top designer who may look perfect from the outside looking in, but actually has a horrible personality. He really sounds like a character, with 52 different phobias and 35 allergies. If there’s anyone that needs to be bubble-wrapped, it sounds like he’s it. Maybe it’s due to all of these fears and allergies that he’s unable to work up the courage to ever pursue love.

Go Jun-hee’s character is more directly related to the titular perfume, and she will play the role of a middle-aged housewife who turns back into her 20s self after using the perfume. She’ll start out the show at her rock-bottom, as the family she’s devoted her entire life to is taken away from her. As she regains the beauty of her youth through this magical perfume, she gets a chance to walk the runway of Eric’s top designer’s show, and enter a top modelling agency. This plot sounds exactly like the type of whimsy needed for a fantasy rom-com, and I look forward to how it turns out.

Perfume is slated to premiere in June this year.

ERIC OPPAAA!!!
Now off to read the news.

It's about time for him to comeback to drama land after 2 seasons of Three Meals a Day, a marriage, and the whole year of activities to celebrate Shinhwa's 20th anniversary. 💗

So basically Kim Min Kyu 2.0 a la INAR but a bajillion more allergies

ughhh basically I am tired of the rich-chaebol-with-over-the-top-allergies trope. I couldn't even watch Cleaning with Passion Now without feeling it was a cheap knockoff of INAR (down to the robot vacumm!). I love Eric so much and have been dying to see him in another drama but this premise sounds like a dead beat. I hope he gets a better script for his come back. But then again if anyone can pump life into a dead script, it's gotta be Eric!

Watching for my goddess. But seriously, that synopsis got me scratching my head.😅

The premise sounds suitable for a rom-com and I can totally see Eric playing the snobby -perfect lead. I hope he accepts.

i vote YES for this pairing... eric is my fav, and i love her -- i think they would be absolutely gorgeous as a couple. if this happens, i am IN!
: )

come back to us Eric! we need you back in a drama!

I wish she'd be able to walk the catwalk WITHOUT turning twenty again...why not an Eric-Noona romance?

Eric is now very close to being 40, so if they were to produce an Eric-Noona romance, she'd have to be 50-ish? Which is also the actual age of our female lead character, now that I think about it. however I'd rather see a young female character rather than see Eric romancing a 50 or 60 year old actress. The latter would be too weird.

Ahhh, sorry about that- I hadn't realised noonas needed to be so much older. My wish was more for a role for a woman of the same age, who didn't have to be "youthful" in order to be considered beautiful enough to be on a runway.
(and I managed to accidentally upvote my own post trying to click on reply, so that should tell you something about my klutz-level)

I can totally imagine Eric in this character

" He really sounds like a character, with 52 different phobias and 35 allergies."
And I thought Seon-gyeol over at Clean with Passion for Now was bad enough.

Has it been 3 years? Man time flies!

I haven't seen Eric for the longest time so it'll be nice to see him once again. I like Go Jun-hee and I'm very curious how this pairing with Eric will turn out.

But pls oh pls.. I believe that this pic doesn't do you justice. You have to be much more in shape than how you look in this pic ok? *praying with winking eyes*

While I do like this possible role for Eric...I am still hoping that he would consider being a villain. haha.