Angel wings and tutus in white on KBS fantasy Dan, Only Love 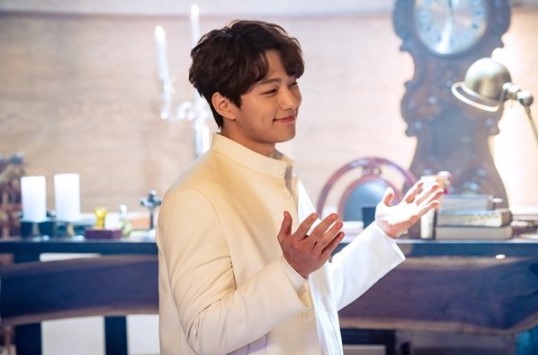 The first stills and video teaser have been released for KBS’ upcoming drama Dan, Only Love starring actors L a.k.a. Kim Myung-soo (Miss Hammurabi) and Shin Hye-sun (Thirty But Seventeen). Lee Dong-gun (Fox Bride Star) is also part of the main cast but no luck at getting a look at his character for this round of promos.

The story is a fantasy rom-com with L playing the role of Kim Dan, a troublemaker angel who finds himself locked outside of heaven’s gates. In order to return to the heavenly realm, Dan is tasked with a mission. He’s to become cupid for a ballerina named Lee Yeon-seo – the character played by Shin Hye-sun. The challenge is that ballerina Lee Yeon-seo doesn’t believe in love and is jaded by her life’s experiences. However, meeting Dan sparks a change in Lee and she begins to find hope in her life once again. 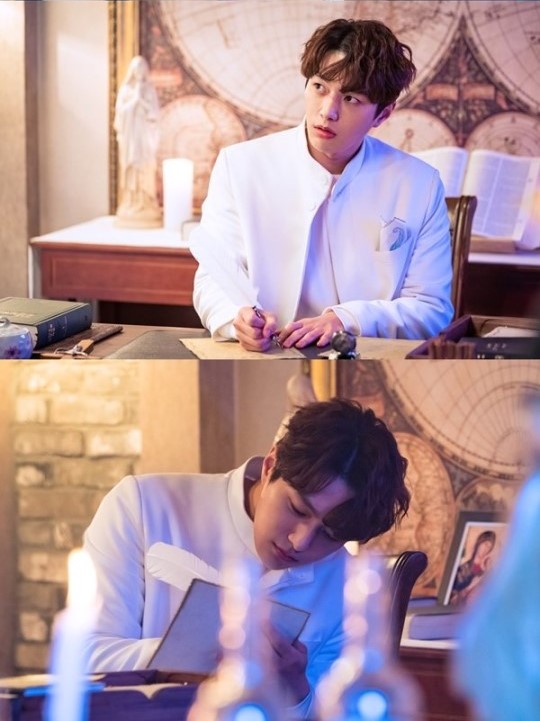 In the newly released stills, L is already looking mischievous, like he did something that he perhaps should not have done. Dressed in white angel garb, we see hints of his bright but wayward personality in the photos.

The teaser is moodier in its tone and focuses on Shin Hye-sun’s role as a ballerina. It starts with Shin Hye-sun dressing up for a ballet performance, which intercuts with clips of her dancing on stage along to an orchestra. She’s wearing a bejewelled white costume and resembles an elegant swan. We see and hear a metronome, and Shin speaks in voice-over, “When I lost all meaning in my life…” It then cuts to a series of flashbacks from difficult moments in her life: trying to walk while blind, a car accident, and stage lights falling onto the stage. Shin continues her narration, “He appeared before me and helped me to stand up again.” As she speaks, we see the silhouette of an angel and a single feather falling. There are more intercuts of the orchestra playing, Shin Hye-sun dancing, and L watching her with a smile. The teaser ends with a close-up on Shin Hye-sun as we hear her voice again, “Dan, Only Love.”

KBS’ new Wednesday-Thursday drama Dan, Only Love is currently set to air next month in May, after Doctor Prisoner concludes its run.

Via JTBC Plus, Sports Chosun

L playing an angel aka L playing himself.
Shin Hye-sun played a ballerina in Oh My Ghostess too.

Is she a dancer in RL, or maybe had ballet training?

I could ask the same about L, lol. (Angel-training?)

No, she is being criticized for her poor ballet posture. Wang Ji-won, an actual ballerina, was considered for this role, but it was ultimately offered to Shin Hye-sun.

I did not know she was criticized for her poor ballet posture.
I hope she will not be criticized this time.

No she is neither being criticized nor was Wang Ji Won in the running...this whole thing has been dragged from another site mostly catering to international audience without one single korean article backing ut up.

I apologize if Wang Ji-won was never in consideration, but I mean Shin Hye-sun is being criticized by ballet dancers who must be more knowledgeable than people with no ballet training.

Wang Ji won from 30but17 was also cast for this role ? I never hears this new

No. Wang Ji Won was never in the picture or consideration for this role from what I know. Please don't spread false news if you have no proof or source.

I cant tell if you are being serious or not by saying the site you tagged is filled with people having knowledge in ballet dance. If you scroll down the comment section there, Shin Hye Sun gets called unattractive among many things. That is relatively a benign thing to say when you see her compared to Seungri and Roy Kim for no justifiable reason.

What do looks have to do with dancing?

@panshel my point is you keep saying that Shin Hye Sun is being criticized for her ballet dance by actual ballet dancers. And then you gave a link to a site which clearly has nothing to do with ballet dance professionals. Infact that article is criticizing her based on two promotional stills. None of us have yet seen her performing ballet to make comment on her dance. Once the show is out, yes we could do that and if she performs badly, let us call her out then. But that site is criticizing her based on two still pictures. And I would take the comments made their with a pinch of salt by how far some of the comments have strayed from topic to insult her. So, to make my point, the site you are referring to in my humble opinion does not represent any group that has knowledge on ballet as a dance form or its technicalities. And no I do not know ballet but I don't think the comments there are credible.

If you play violin, you would know when actors cannot play violin. You do not need to be a professional violinist in an orchestra.

If you don't believe A Koala's Playground, then what about Reddit?

@panshel my answer would be yes a handful of people dont like her posture based of reditt. Is that the case with majority of domestic or international viewers, I dont know....cant tell yet. Will have to wait till drama airs to know that. And the other one, I cant take that place seriously.

Domestic or international viewers should not matter because ballet is global.

My point is her criticism is not unbelievable because ballet is an art that dancers train since the age of 4. It is more unbelievable for an actress to become a ballerina with basic training.

she likely had previous ballet training so she can do the poses and simple movements -- but if you notice in the actual dance scenes, they are using a professional ballet dancer (rightfully so) because unless one is dancing daily, you can't perform such technique correctly.

the ballet scenes look gorgeous, i for one am looking forward to watching this, as i love ballet - not a dancer, but had a daughter who studied for 14 years.

there's a musical on its way to Broadway in the US -- Marie, Dancing Still -- that features a principal dancer from the New York City Ballet. it is wonderful to have a professional dancer in the lead role, singing and acting as well. the ensemble dancers are quite skilled also, but there's nothing like seeing a professional -- she literally floats across the floor, something only daily dedication and skill can accomplish.

those of you in NYC, when it hits Broadway, i recommend going to see it -- they played in Seattle last month to work out the bugs (we get the early previews of Broadway-bound musicals and play)..

Thanks for the suggestion. I am pretty sure they would be using body doubles so I am looking forward to it. L also looks good. Hope the script is tight

Yes, her character was in a wheelchair in Oh My Ghostess.

The teaser look great but I wonder if L will be up :(

I am so happy that Shin Hye Sun is getting more and more main roles! Loved her in 17 but 30 and then in Hymn of Death and so excited to her here again! She looks amazing as a ballerina!
Happy to L in a mischievous role after the kinda serious judge role in Miss Hammurabi.
Also I did not realize it was starting so soon!

The Lana Del Rey song in the teaser is throwing me off lol. It makes the show seem so moody. But, the stills of L look cute and mischievous.

I should have read before posting! I dont listen to a lot of music on the radio---I never know current artists. I was wondering who that singer was and the song. Its Lana Del Rey? Whats the title?

Oh, this looks good. And Im digging the song.

I'm going to try to give this drama a watch even though I am an anti-fan of L. I've heard he has gotten better at acting since the drama I watched that made me cringe nearly every time he was on screen. No matter how nice an actor might look, I just truly do not want to watch them if they can't act. I'm a big fan of dancing and think the lead actress will probably do a wonderful job with the role. So I'm going to give it a try and hope to have an open mind as the drama begins.

He was charming in Miss Hammurabi. I saw him for the first time in that drama with Crystal and Rain and his character was more interesting than the whole thing, I didn't know he was an idol.

@BC the drama I saw with him was historical but I forget which drama. All I can remember of the drama is being embarrassed at how bad his acting was. The drama with Krystal and Rain I started to watch but I really disliked the pairing of Krystal and Rain so I stopped watching that half way through. I don't remember L being in that at all. I don't know him as an idol either. I have been told he was good in Miss Hammurabi and I have been considering trying to watch that, but so far haven't. I do know actors can build skills and that their acting ability can increase or decrease depending on the other actors in the drama, so I haven't given up on L entirely, just am not quite ready to spend more time watching him on screen. This new drama looks like it might be the one that gets me to give another try. :-) Thanks for your comments.

Miss Hammurabi was quite good - the writer of the drama is or was judge himself so it's surprisingly watchable without cringing too much. The female character could be hot head sometimes but every revolutionary person is like that.

L was playing the second male lead and had better chemistry with Krystal. It was a first drama I used forwarding button for.

Okay on the shallow part of this stills, I was NOT expecting Kim Myung Soo's hair to be curly. O.O
I can't tell if I like it and if it just makes him look more endearing. I'm already on his side and I don't even know what he did to be kicked out. XD

Ohhhhhhh...this looks good. I love her!

I'm so excited for this drama. Ive been wanting to see L in another drama as a lead, and I love how mischievous he looks in this. I am so looking forward to this!

I sincerely hope he isn't awkward. I'm saying this as a fan. Though I did hear he was better in Miss Hammarabi, so I'm optimistic. I mean he's never been straight up horrible, just...awkward.

Interestingly, AsianWiki has the show listed by its English title, ANGEL'S LAST MISSION: LOVE. Hmmm. Interesting. I don't know about the grammar of the Korean title -- and wonder if it could also be translated as "Dan, just [go ahead and] love"? I'm still looking forward to seeing how this drama stacks up against MICHAEL ("I'm not that kind of angel"). I'm sure we'll be in for interesting metaphysics. ;-)

This teaser strikes me as a sight gag hinting at the apocryphal theological debate about how many angels can dance on the head of a pin. LOL!

Thanks to this trailer, I found Lana Del Rey's song. This is my first time listening to her song and it's on repeat now. I'm anticipating this drama. The teaser looks promising