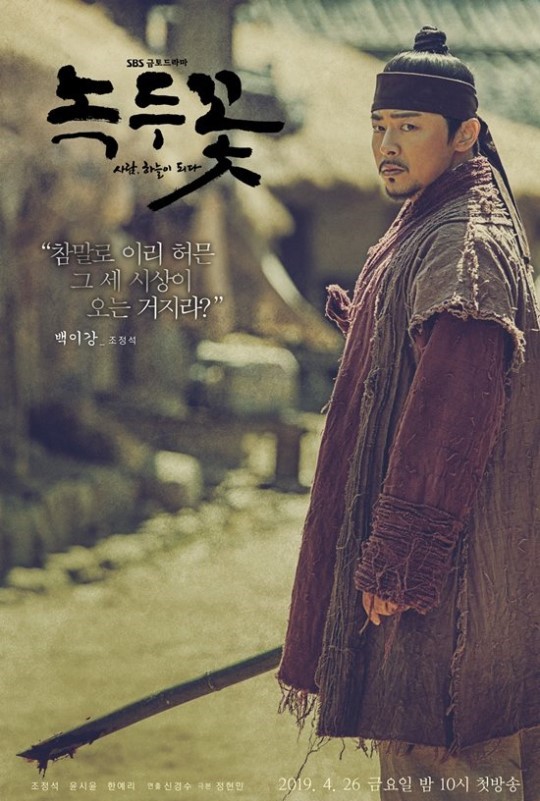 The sageuk is set around the 1894 Donghak Rebellion, and centers around two half-brothers who find themselves in opposing factions.

For historical background, in the 1860’s, a religion called Donghak was formed in Korea which combined aspects of several different religions and philosphies, including Confucianism, Buddhism, Taoism, and shamanism. Most of the followers were commoners and slaves, as the aristocracy rejected the belief system. Donghak’s founder was arrested and killed in 1864, and the movement went underground until 1893. In the 1890s, rising frustrations from religious persecution, worsening economic conditions for the lower classes, and the presence of foreign nations (including Japan) in Korea all brewed into an atmosphere ripe for rebellion. Thus, the 1894 rebellion began.

In the first poster, we see older brother Baek Yi-kang (played by Jo Jung-seok) wearing peasant attire and staring intently into the camera. As an illegitimate son, he spent his life being treated as second class. People called him by pronouns like “him” or “you” instead of by his name. Despite the challenges in his life, he doesn’t let himself stay resigned to his circumstances and gradually rises up as a leader in the rebellion. The caption on his poster is written in the character’s Jeolla saturi, “If we really do this, that new world will come true, right?” 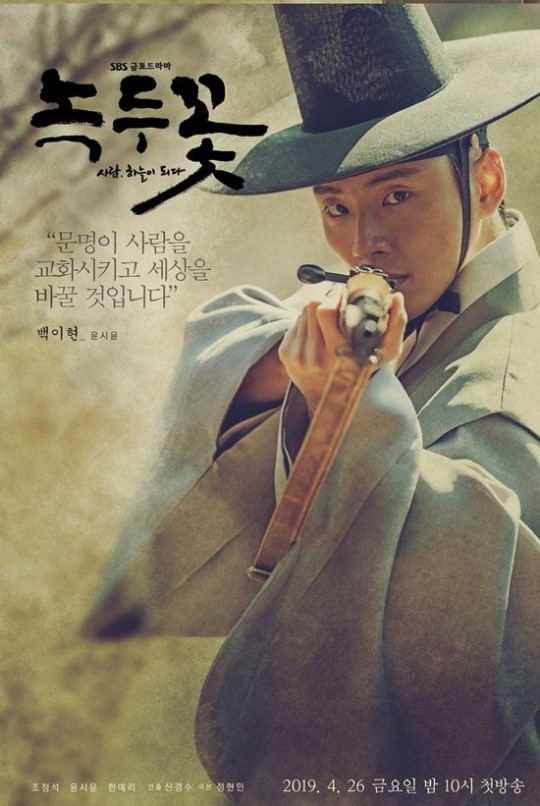 The second poster is of younger brother Baek Yi-hyun (played by Yoon Shi-yoon). He’s dressed in yangban clothing with a gat, but he holds a rifle and aims it at the camera. The character also dreams of a new and better world. However, his dream of a better world instigates a drastic and fateful change in his life. On his poster, the caption reads, “It is civilization that will reform people and change the world.” 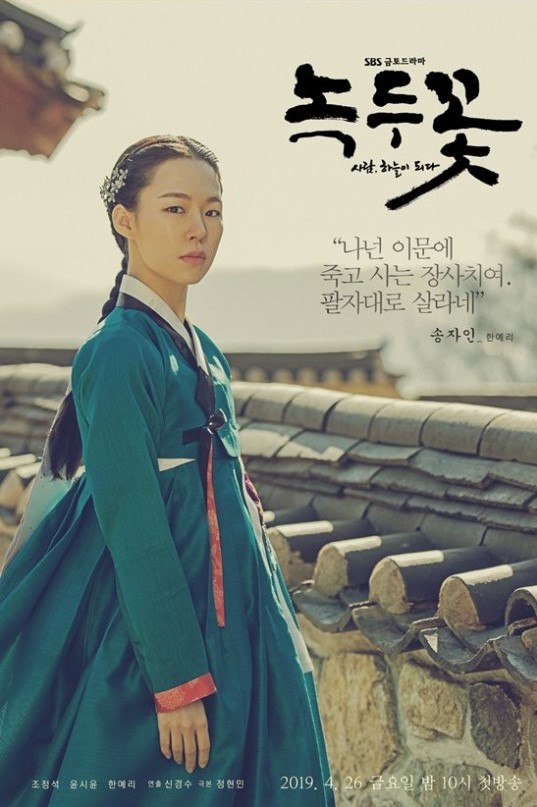 The third poster shows Song Ja-in (played by Han Ye-ri) standing tall and staring at the camera with a keen eye. Daughter of a merchant, but also a business owner herself, she is a steely and competent innkeeper. On the poster, her caption is also in Jeolla saturi, “I’m a merchant who lives to make a profit. I’ll just live the life I was born into. ”

Writing for the drama is writer Jung Hyun-min. Directing is PD Shin Kyung-soo, who previously worked with Han Ye-ri on Six Flying Dragons.

I’m so excited! Han Ye-ri is my all-time favorite actress hands down. And to have her acting with both Jo Jung-seok and Yoon Shi-yoon! In sageuk! My drama wishes are coming true!

SBS sageuk Nokdu Flower is currently set to premiere on April 26, and will be airing Fridays and Saturdays on SBS.

Everyone is far too beautiful - is anyone here even surprised that Jo Jung-seok looks great in rags?

I'm torn between wanting to watch this because SAGEUK (and the cast...no complaints for once) and being allergic to post-jeongjo joseon period dramas(because depressing...).

Jung won't sugarcoat it so it's going to be painfully good.
I'm trying to convince you to watch it but I don't think I'm helping lol.

Well, it's not far from the end of the semester for me, so I'll probably end up giving it at least a peek. It's probably finals around the corner giving me an aversion to dramas with probably-not-a-happy-ending, haha. It'll probably be painfully good in the way Comrades(the one with choi soo jong) was...remind me not to watch korean war dramas anymore.

Oh COMRADES <3. Best war drama ever. I've never cried so hard over a drama until COMRADES came along.
It'll stay on my top 5 dramas but I don't think I'll watch it again.

It doesn't look like it'll end well, even for our heroine.

Gosh, Jo Jung-seok looks super great in sageuk garb. And I'm so happy to see Han Ye-ri on my screen again. Let me stare at all the pretty now, because I'm pretty sure that once the drama begin, I'll be too busy worrying about and crying for everyone.

I'm not afraid to set high expectation for this one since I basically love everyone in this drama from writer/pd and down to the supporting cast.

@kiara,
I can’t wait. According to both AsianWiki and Wiki (still under the title MUNG BEAN FLOWER) NF will be 48 episodes or 24 under the old money.
How are you on this time frame in Korean history?
I really have to prep even a little.

Just the basics so I will be learning with you :).

Reporting for sageuk duty, Chingus, and looking forward to enjoying and discussing NOKDOO FLOWER with you and the rest of the Beanies.

Re: history tidbits, in broad strokes

Donghak = “Eastern learning.” It developed as a reaction against Western influences. I came across the following book that may be of interest:

Eastern Learning and the Heavenly Way: The Tonghak and Chondogyo Movements and the Twilight of Korean Independence by Carl F. Young
https://uhpress.hawaii.edu/title/eastern-learning-and-the-heavenly-way-the-tonghak-and-chondogyo-movements-and-the-twilight-of-korean-independence/

I had an epiphany about the Donghak Rebellion during a recent episode of HAECHI – the one in which Yi Tan reveals that he is descended from Crown Prince So-hyeon, who died under suspicious circumstances after returning from a decade as a hostage in Ming. So-hyeon had met and befriended Jesuit missionaries in China and brought back Western science and technology, along with “Western learning” – Christianity and philosophy. His father, King Injo, was not amused, and went on to persecute Joseon’s Catholic converts.

The Donghak Rebellion was referenced in MR. SUNSHINE. I’ve forgotten the exact details. In the final recap, I posted links to digitized copies of Scots-Canadian journalist Frederick Arthur McKenzie's accounts of Japanese oppression in Joseon. Recapper @dramallama had posted a dandy link to an actual photo of a band of Righteous Army rebels that Alexander had taken. It had been reenacted in the drama. That prompted me to look up Alexander. A lengthy discussion ensued, and extended to the role of Christianity in Korean history:

When I recently saw @ally-le’s closing remarks on MR. SUNSHINE in comment 74, I felt compelled to mention AMNOK RIVER FLOWS, which I watched several years ago. It is based on an autobiographical novel. Li Mi-reuk’s exile in Weimar Germany was a case of “Eastern Learning” that went West. A professor of Oriental philosophy, the Joseon expatriate exerted a tangible influence on German resistance to National Socialism. I had chickenskin as I realized that Li had influenced the White Rose. It is important to acknowledge the connection with Korea’s long traditions of Confucian scholarship and righteous armies, including that of the Mung Bean General. Just my $0.02.
http://www.dramabeans.com/2018/10/mr-sunshine-episode-24-final/comment-page-2/#comment-3440506

As alway @pakalanapikake thank you so much for your briefing and references. You have given me plenty of home work.

You're most welcome. Sometimes when I notice these kinds of historical threads, it blows my mind. Such was the case here. ;-)

OOOOoooo I just commented on how Asadal looked promising but this one looks good too! I love love love all those actors, but the writer is a complete question mark....

He is solid and a more historical conscious writer imo. If you are interested in a historical interpretation of the "Donghak Peasant Revolution" then this is your drama, if you like fantasy sageuks then ASADAL is your drama.

Jung wrote JEONG DO-JEON and the writers of ASADAL wrote SIX FLYING DRAGONS. Both were based on the same time period but his version was an interpretation of the actual history (that was basically written by the winners - Yi Bang-won's descendants) while SFD in-cooperated some of their own fictional story with a bit of wuxia action to link their other two previous sageuks (QSD and TREE WITH DEEP ROOT) together as kind of a trilogy.

Anyway, I'm on both camps for different reasons but I'm glad NOKDU is coming out first because that's what I'm most interested in.

Thank you for the perspective! Both approach seem complementary, I'm definitly looking forward to those!

Oh, dear, one of the above mentioned leads I can't stand, but will swallow my dislike because everything else, writing, rest of cast, historical, etc., looks so quality.

I'm so excited omg. I hope Han Yeri will be a badass. I'm hyped!

So many new saeguks that seem promising. Will tune in for this one for the cast and credits!

Its rare to get 3 solid leads JJS, YSY and HYR in one drama so I will be watching this.
Hope it will be good!

sigh.. at least i get to see Dong gu again. Missed his good boy turned mean pesona in 2days 1 night.

Yoon Shi Yoon always looks good in a saguk. I am looking forward to this since the cancellation of 2 Days 1 Night has left me with a shortage of Dong Gu.

Thank you for the update, @tccolb. The posters are lovely.

Eventually I noticed that Jo Jung-seok is holding what seems to be a piece of beveled bamboo. At first I thought it was a sword, but I think I can see a node. Bringing a sword to a gunfight is bad enough. But a piece of pointy bamboo? We already know that this is not going to end well.

I am so ready for this drama. I am on board with all the leads!