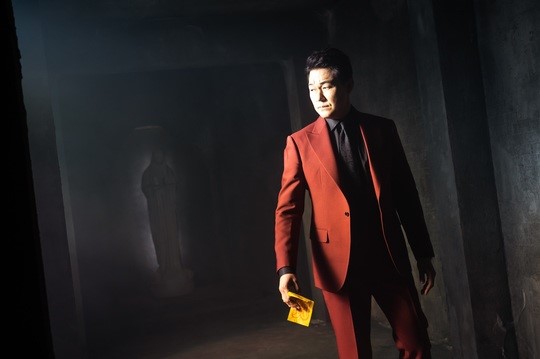 Finally! I feel like it’s been forever since we’ve had any news of tvN’s When the Devil Calls Your Name, so it’s nice to know that the drama reunion of the best buddy cop duo in recent drama history, a.k.a. Life on Mars’ Jung Kyung-ho and Park Sung-woong, has been busy behind the scenes. And can I just say how excited I am that the reports are now labeling the show as a fantasy comedy? Both actors have great comic timing, and I can’t wait for them to play off each other on screen.

The first stills are out for the pair, who won’t be playing colleagues this time around, but are in a contractual relationship. And not really the kind you usually find in dramas: Jung Kyung-ho plays a star composer whose success directly stems from a deal with the devil, played by Park Sung-woong. Their contract is about to expire, though, and in a bid to keep his soul, which was the price he paid for his enormous success, Jung Kyung-ho initiates a dangerous, life-risking game.

Though I’m a little sad to hear that Jung Kyung-ho and Park Sung-woong’s characters won’t be on the same side (that we know of), I’m sure that the two will somehow create bromance where there shouldn’t be any. And since the show is billed as a comedy, though there are literally life-and-death stakes at play, I’m looking forward to all the fun the two will surely have as a troublesome human client who is essentially trying to dine and dash, and the demon just trying to collect the soul he’s been promised. Let the bickering, cat-and-mouse game commence!

When the Devil Calls Your Name will air in tvN’s Wednesday-Thursday slot, and premiere on July 31. 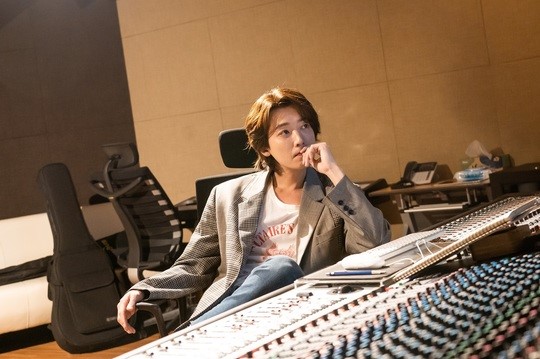 I just drop by to say how I looovvveee Jung Kyung Ho's hairstyle in this still.

So excited about these two men sharing yet another screen.

Me too! I love the hairstyle. The moment I saw his hair, I squeed, "Eeeeee handsome..."

I'm so ready for this.

The first stills are out for the pair, who won’t be playing colleagues this time around, but are in a contractual relationship. And not really the kind you usually find in dramas:

But I will still ship them, if angels can fall in love what wrong did the devil do? And also devil's not gonna be scared of dustification!

Oh so we will have a bickering relationship, yes please!

Oh! I'm very excited!!! Their duo in Life On Mars was so funny! (the fight in the hospital room)

But what is this haircut ? O_O

That fight is up there with the playground fight in <Police Unit 38.

Yes! I forgot about the fight between Ma Dong-seok and Seo In-guk in TASK FORCE 38.

So should some of us send requests to both Viki and Netflix to pick up the series?

Has a fan channel on Viki. You can request it here:
https://www.viki.com/tv/36644c-when-the-devil-calls-your-name

The request form is here: https://vikiinc.wufoo.com/forms/title-request-form/

Since it is a tvN production there may be a better chance of WTDCYN showing up on Netflix. JKH’s and tvN’s PRISON PLAYBOOK was on Netflix.
Remember tvN’s episodic length.

Done. Thanks for the link.

"the two will somehow create bromance where there shouldn’t be any" made me laugh hard.

Also, Park Sungwoong in that red suit is looking goooood.

Also a nice article about the two from HanCinema:
https://www.hancinema.net/jung-kyung-ho-park-sung-woong-is-like-a-brother-and-strong-support-130724.html?utm_source=dlvr.it&utm_medium=facebook&fbclid=IwAR2uG2x_2FTOnUK0XnDyJCfVhrI8nTl4H5HW9z82baf2bmPVAuDyAEhQCco

Thanks @linda-palapala.
I loved JKH’s line (about PSW) “I wish I had met him sooner”.
Sweet.
(O/T One of the things I find interesting about Korean actors is that notwithstanding how successful they become they still do modeling gigs.)

The first stills are out for the pair, who won’t be playing colleagues this time around, but are in a contractual relationship. And not really the kind you usually find in dramas.

🙁 amazingly bummed now after a flickering moment of "awesome!"

the BROS are BACK!!!
just finished a rewatch of Life on Mars, so this is super welcome news!!

Thank you @tipsymocha for this update. I have been waiting for news on one of my favorite’s new drama. A couple of things.
Producer-nim please find a cameo for another of my favorites Yoon Hyun-min.
After LIFE ON MARS JKH walked the Camino de Santiago in Spain.
https://www.instagram.com/p/Bo0oOvrBZLF/?hl=en
After that he chose a drama about a Faustian bargain. Interesting.

This drama is from the same writer as Come Back Mister and that drama was branded as a comedy too but I cried so hard. I need to be ready to shed some tears. *sniff sniff*

Really? 😮 Then it's good ! 😆 I liked the comedy in Comeback Mister and their sad scene felt good too

There are two writers. I do not know the other one but if it has the same vibes as Come Back Mister, then I'm all in! I really liked that show better than Descendants of the Sun at the time when both shows were airing.

Can't wait to shed tears of joy and sadness at the same time!

Woow~ finally the news about Jung Kyung Ho's comeback drama~ I love that hairstyle on him ! 😄 ever since the first time he posted it on his IG account, I knew it would be good 😁

My Wed-Thurs schedule in July will be busy with tvN and OCN drama, The Devil and Class of Lies, they both look sooo promising ! 😆

i will watch the shit out of this. sometimes i really hate kdrama descriptions because they don't do good jobs at explaining at all. it's like a netflix summary. jung kyung ho looks a lot diff with short hair (younger? i think.) i adored life on mars there's one thing i couldn't stand but everyone made it a good watch.

also not even close to important but park sung woon is so attractive LMAO like oh my god when i was watching life on mars i was like "am i allowed...?" cos hes much older than me. but beautiful smh.

Love them. I was hoping for life on mars season 2 to see their tandem again. I'M sure this is a good drama too as both of them are great in acting any roles.

**This month I already finished Prison Playbook and Life on Mars, and still watching Heartless city
after that I have a plan to watch Falling for Innocence

Love him in HEARTLESS CITY. One of my fave live watch drama.
Jung Kyung-ho gave 120%. He injured himself during the show and had to be on some heavy duty pain killers just to finish the last couple episodes.

It was his best haircut and style too!

@kiara,
HC is where I became a JKH and YHM fan for life.
I did not know JKH had been injured during HC production. I remember the epic knife fight he was in towards the end.
Sidebar. As you know HC alum Choi Moo-sung “Safari” is giving a wonderful performance in NOKDU FLOWER.

I don't know how he managed to finish it with a herniated disc.

Wow
Thank you for the info!

I love him in his all of HC action scenes so far!! So smooth 😍

Still at ep 13
Must put it on hold, because real life is calling 🙈

i like that plan! never too much of JKH! i need to start rewatching in anticipation of his acting not to mention that handsome face!

Hmmmm. No comment. Waiting to see ep 1 to help me decide If I'll watch it. Don't know the actors

this is the time to learn about both of them! they are awesome and always deliver!

21 Fatcat lost her way while on semi-hiatus

Yas! I like this.
Finally new dramas that might pull me out of my slump!
Can't wait~

oh this will be epic! i love them both and they will be sure to deliver! "joins ObsessedMuch in a happy dance"

Cannot wait for it!!

My lovely ajushi is here! YES!

Jung Kyung Ho looks so much like Jinwoo of Winner in that still I had to do a double take.

Custom Gauges and Gauge Faces to see how much effort it takes to put together a radio. Or a computer, or a DVD player, or anything. The video shows the same car with 4 different gauges.

There are 2 gauges for tachometer (X and Y), 1 gauge for oil temperature (Z), and 3 gauges for speed (A, B, C). The video even shows the gauges with different digital display screens. It shows all the effort and pizazz of putting them together.

Real-Time tracking of cell and radiotelephone use in cars and SUVs is sometimes based on the NHTSA's "Automotive Occupant Protection" (AOP) regulations. The AOP regulations limit