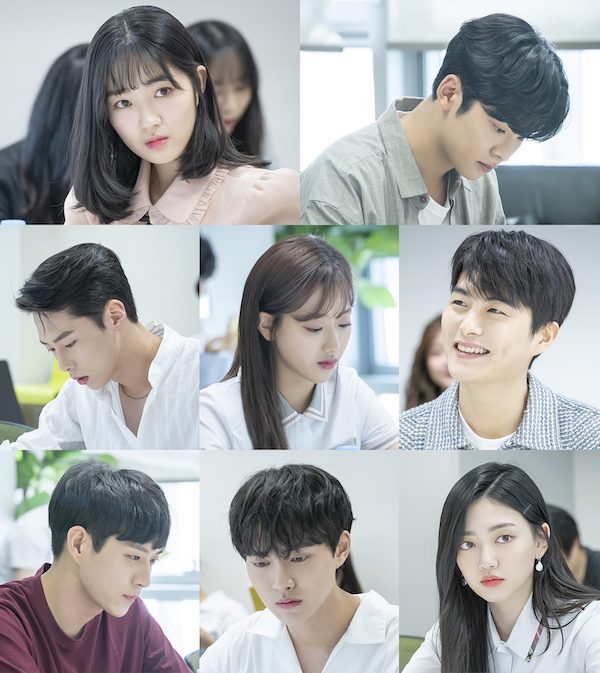 This script read was an optimistic start for youth-fantasy love story, A Day Found by Chance. Based on a web comic series by the title of July Found by Chance, this drama features Kim Hye-yoon (SKY Castle) as a wealthy female high school student who rejects the fate decided for her and chooses to find her own love instead. It’s a story within a story as the main character realizes that she’s actually a side character in a comic book story and decides to change her own destiny. Think W—Two Worlds colliding with Heirs.

Director Kim Sang-hyub (The King Loves) began the script read with a couple words: “It’s an honor to be with such good people. I can feel the energy from all of our new young actor friends. I will also work hard to help support your talent and potential. I will try my best so that A Day Found by Chance will become a gem. Fighting!”

SF9’s Kim Ro-woon (Fox Bride Star) plays a handsome character with mysterious charms, and Lee Jae-wook (Memories of the Alhambra) plays the charismatic bad boy who is also Kim Hye-yoon’s fiance. According to reports, the bickering chemistry between the three main characters was off the charts so I’m looking forward to it already. 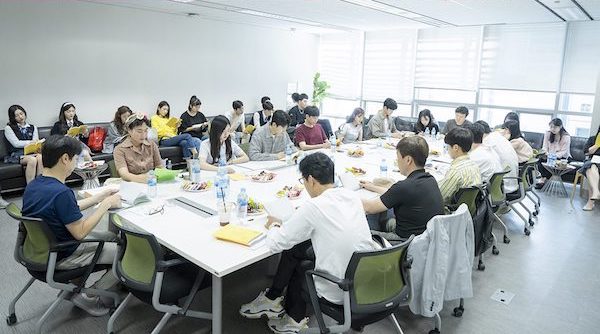 The supporting cast is as follows: APRIL’s Lee Na-eun has been cast as a poor, but cheerful girl who always looks on the bright side. Jung Geon-joo (The Tuna and the Dolphin) plays a mischievous playful character, and Kim Young-dae (Item) plays the center visual in pretty-boy group A3 within the drama.

Then we have some more experienced actors: Lee Tae-ri (Voice 3) who will have a comic role, veteran Eom Hyo-seop (That Psychometric Guy) who will lend a more serious edge to the drama, Choi Jin-ho (Item), and Ji Soo-won (Sound of Your Heart: Reboot)

MBC Wednesday-Thursday miniseries A Day Found by Chance, written by Song Ha-young and In Ji-hye, will start airing in September.

I've read the webtoon and it was reaaaally great. I am so excited to see Kim Hye-yoon on my screen again after Sky Castle and Rowoon after Fox Bride Star.

After that, she will only have to fall in love with the other seven members of SF9 :D

It is actually not that hard to fall in love with all the members of SF9. But YES to your suggestion! Inseong is also getting some acting gigs so we'll see.

I particulary loved Taeyang as the Goblin, he was pretty handsome in this suit, or as Gang Tae-Young of Lovers in Paris, he was very funny and pretty .

Taeyang really has the vibes of an actor! The parodies they did in League of SF9gends were legendary and fun. Also, their acting in web dramas were really great so I think all of them will do great in the acting field!

I'm all about the veterans for this one- lee tae ri, eom hyo sup, choi jin ho, woohoo!

So excited for Rowoon in a lead role. Fighting!

The story looks fun! I like the casting. Kim Hye-yoon was so great in Sky Castle, I love her face, she's really beautiful. Rowoon was good in About Time and Fox Bride Stars. There will be a cute difference of height : 1m60 vs 1m90.

I'm recognising a lot of faces :O majority of them I've seen in web dramas! So glad to see that they are getting drama roles ^^

@oppafangirl I want today and I want it to be good

Looks great! I will try it out with you!!

Dang, Kim Hye-yoon's high school character already has a fiance??
Glad to see her in a new drama so soon though.

Yes, since Danoh is an ojou-sama lol

Lol this is like a Playlist Global reunion. That web Drama company really put a lot of young actors on this past year.