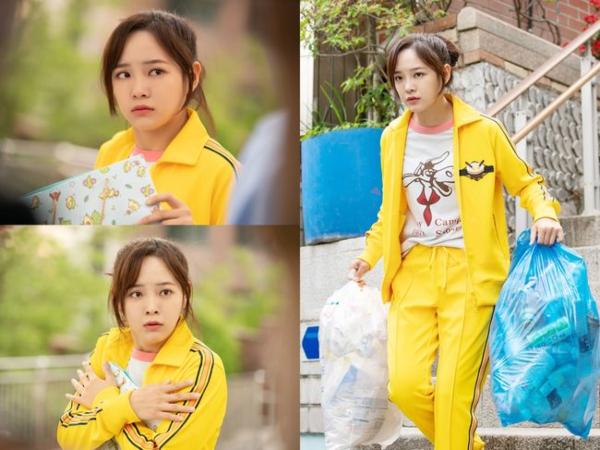 Although I’m generally wary of rookie idols taking on lead roles, I was pleasantly surprised by Kim Se-jung in her acting debut School 2017, which is why I’m interested to see her back on the small screen and outside the classroom environment. Let Me Hear Your Song, KBS’s upcoming rom-com with a dash of mystery and thriller, has released several new stills of Kim Se-jung in what looks like her I’m-only-leaving-the-house-for-a-few-minutes attire (I might have that exact outfit, myself).

The stills all appear to be from the same scene and there aren’t many of them, but the show is being pretty stingy with its promo material, what with the three stills here and the three stills of Kim Se-jung’s co-star Yeon Woo-jin (Priest) that was released a little under a week ago, so I’ll take what I can get. Kim Se-jung will play a timpanist who is a key witness to a terrible murder but has lost all of her memories of the incident. Coupled with the amnesia is her insomnia, which curiously goes away only when she listens to off-key singing.

Cue Yeon Woo-jin’s character, who joins the same orchestra she’s a member of as a guest pianist. I don’t know how he ends up moonlighting as her sleeping aide, but his tone-deaf lullabies become crucial to Kim Se-jung retrieving the memories she lost of the murder. And I think we can safely presume that in the midst of all the musical crime-fighting, the two orchestra-mates will fall in love.

KBS’s Let Me Hear Your Song will premiere on July 29 and air on Mondays and Tuesdays.

I know that this premise sounds a bit ridiculous, but I an so looking forward to it. 🤷‍♀️ Maybe it is the forced proximity which can be cute and lead to some fun misunderstandings.
I hope there is lots of music and they show us scenes of being in an orchestra.
I like that she is a drummer and he the pianist.
I dont know about being tone deaf, but being a musician doesnt mean he can carry a tune.
It makes me think of that video of Tablo singing the vocal guide for Crush, lol.

The descriptions often are more ridiculous than the actual plot.
We will see how this one will turn out.

I couldn't recognize her! I liked her in School and this sounds fun.

This is so weird, it has to be good.

What a bizarre premise. I think I'll have to try it.

These games of bloody trope bingo are getting weirder and weirder in their combinations, I tell you.
Other than John Green, who just thinks "ahh I shall make my character a TIMPANIST!!!"
wtf????

I love crazy plots AND Kim Se-jung, so I'm all in!

I love Kim Sejong! Loved her in a School 2017. Sadly, I haven’t seen any of Yeon Woojin’s dramas since Ojakyo Brothers! I’m excited for this one.