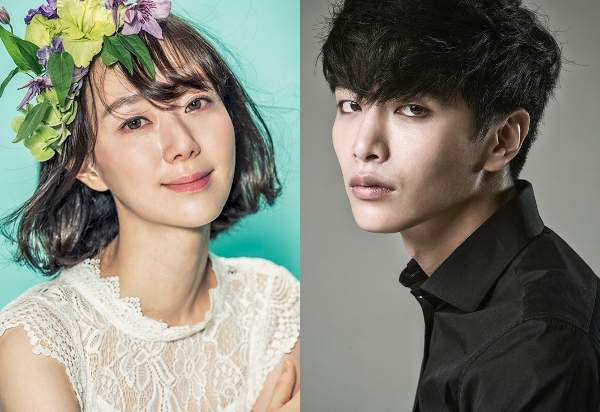 OCN’s new drama Everyone’s Lie has confirmed Lee Min-ki (Beauty Inside) and Lee Yoo-young (My Fellow Citizens) as its two leads. Directed by Cheese in the Trap PD Lee Yoon-jung, this drama follows the story of a woman whose father suddenly dies and whose husband abruptly disappears. In order to save her husband, she becomes a congresswoman and teams up with a police investigator to pursue the truth.

At face-value, this sounds a lot like a gender-reversed thriller version of Lee Yoo-young’s most recent political-comedy drama, My Fellow Citizens, but the rest of the synopsis is much more chilling. Lee Yoo-young is a congressman’s youngest daughter, who looks sophisticated and successful to others. But inside the family, she feels that she has failed to live up to their high expectations of her. Living with toxic sibling rivalry, she feels like she’s inferior to her older sisters, but while her father was living, she received his absolute love.

She met her husband through her family in what seemed like a fateful meeting, but small disappointments lead them to live distant lives. Until one day, her father suddenly dies in a suspicious car crash, and her husband seems to vanish into thin air. Desperately trying to do anything to get her husband back, she becomes a congresswoman herself.

Lee Min-ki plays a police investigator looks like a cold, urbane man, but if you get to know him, he’s very affectionate and sociable. With great instincts, motivational drive, and luck following him, catching bad guys was both his job and hobby. But now, he lives a completely different life, having applied to work at an unpopulated, rural police station.

While living this ordinary quiet life, he somehow becomes the case lead on Lee Yoo-young’s father’s death. The congressman died in what looks like an accidental car crash, but Lee Min-ki realizes that there’s more to it than coincidence. In pursuing this case, his old memories of being an active field agent come back to him.

Everyone’s Lie will air on OCN sometime later this year.

i love her character in fellow citizens (well...i saw up to like ep 3 lol) so sure. she looks so much older than her age, it's hard to believe she and i are only like two years apart...lol..

i love sensitive male leads ! so this seems cool. (i know that stuff was sorta shaky for lmk for a while iirc like, allegations? they were dropped right? just makin' sure...but i also dont have the full story which is important to me but i digress..)

i really would have just loved possessed if it kept the same energy throughout..so either if they do a romance here just like dont ruin it..or..

I love the talented Lee Yoo-young and my heart goes out to her every time I see a picture of her. I hope work is helping her cope with her loss.

Oh dear, I wonder if Lee Yoo-young is ready for another project after her message last week?

I read the agency has released a statement saying it was sort of a mistake and she didn't mean it but we know we can't take depression or suicide lightly. I'm worried for her but happy that she's signed on another project. Being with people will help her cope I hope.

I will always welcome more doses of Lee Yooyoung but I'm genuinely worried about her. It feels like she's drowning herself in work to keep her mind off & not deal with it. I hope I'm wrong but last week's deleted IG caption kinda confirmed my doubts. ARGH. Please take good care of yourself, girl. 😢🙏

hey sorry could you expand on this? keep her mind off what exactly?

I’m trying to be super chill about this and all but I CAN’T HELP IT I’M EXCITED.

I’m so glad to see Lee Min-ki pick up something darker after two back-to-back rom-coms, and “affectionate and sociable” kill me now Min-ki I am READY FOR THIS. I can already see him being amazing in this role. I know this drama is dark, but can I have plenty of smiles from him? Please? Pretty please?

I just started My Fellow Citizens... yes, I may have started it just to finally check out Lee Yoo-young. It’s whatever. Totally normal thing to do. Anyway, I’ve only seen one episode but I LOVE HER. Min-ki always has great co-stars and it makes me so happy.

I know Cheese in the Trap had its behind-the-scenes issues, but I really do like this PD a lot and I always support having more things directed by female directors in dramaland! At the very least, she doesn’t choose bad scripts and her OST selections are always awesome and unique. Also, she’s worked with Min-ki before on Taereung National Village over a decade ago and seeing what comes from them reuniting after so long will be so much fun.

Totally forgot to add: I hope Lee Yoo-young is okay. I hope she knows what she’s doing with how much she has been working lately. I hope that working will help her heal instead of just distracting her. This PD did Argon, Kim Joo-hyuk’s last drama before passing away, so I hope working together will be beneficial for them both. Be safe and healthy, honey!

I came here specifically to see if you were OK.

Do you think, @mindy, that his house in the unpopulated rural region would have room a private pottery studio?

HAHAHAHA KIMBAP. You never fail to make me laugh.

Not gonna lie though, my mind also went to Monster at the mention of the countryside.

I imagine his character is going to be a little bit different...

I mean there is no way for him to depopulate a region that is already unpopulated, right @mindy?

@mindy I'm not even gonna bother expressing my excitement, because you perfectly encapsulate it!

I'm also looking forwards to this PD-LMK reunion. Taerung National Village is such an underrated (LMK) classic, I loved it (Plus it has My-Favorite-Ahjussi-Ever: Lee Seon-Kyun in it... I mean that VOICE)!

Can't wait to fangirl with you about this! 😭💖

Confession: I still haven’t watched Taereung, but I gotta before this airs now.

I found Taerung to be a pretty solid youth drama, and LMK was absolutely adorable!

Wow...I did not know the back story, that Lee Min Ki worked with the PD before....this is going to be awesome.

8 egads aka Dame Maggie with a heart of coal

I'm totally here for this, but I really really hope Lee Yoo-young is not taking on too much and is getting any support or help she needs. This drama system is no joke, and I imagine it's rough on people's physical and mental health.

9 Katakwasabi is waiting for Royal Hotness new drama to air 😎

Yay for LYY and LMK! I like them. The plot I'm not drawn into yet. But I might tune in for the cast.

Seeing that this is from the Cheese in the Trap PD makes me both excited and worried. Hope this will be good. But since both actors are dear to me, I will surely check this out.

Looks like elections and politicians are the latest dramaland trend. As roles for lead characters, not just parents or villains.

Yay, LMK in a apparently multilayered role. He is so delightfully weird (and of course beautiful) that I always enjoy his roles. I've only seen LYY in one drama but I look forward to what seems to be a strong character!

LYY drama is a must watch for me - she is talented n like the way she speaks. Only time will heal, stay strong LYY.

i love me some lee min ki so this is exciting for me. (that is what i am saying all the time with my list growing longer and longer but its Lee MinKi!) loved him since he stole my heart long ago. he is so versatile and makes my heart speed up!