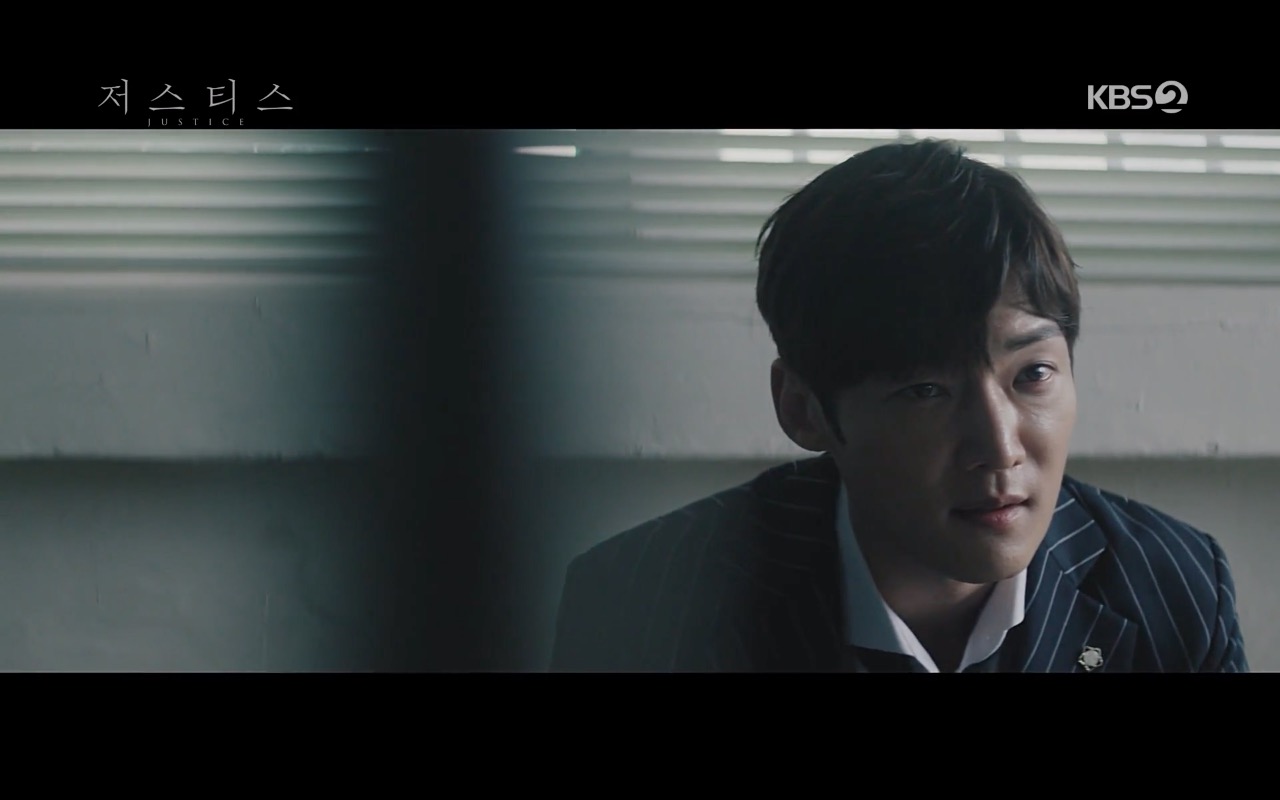 There are so many dramas airing these days, with too few hours in the day. Since we haven’t been able to provide full coverage for every drama, we thought this would be the perfect time to revive the First Impressions feature. Much like the title (okay, exactly like the title), we’ll share our first impressions on a drama’s premiere. Without further ado, let’s get to it!

Amongst the flood of premieres this week we had KBS’s latest Wednesday-Thursday drama, a thriller called Justice. Lawyers, corruption, crime, and court scenes — normally, this sort of story isn’t enough to grab me right off the bat, but Justice is slick, fast-paced, and quickly builds a compelling story. The drama had two points of interest for me before it premiered: the cast and the writer who is responsible for two of my favorite teen dramas, School 2017 and Sassy Go Go. It’s quite the genre shift here with Justice, so I’m interested to see how the writing and style will translate (or won’t translate). 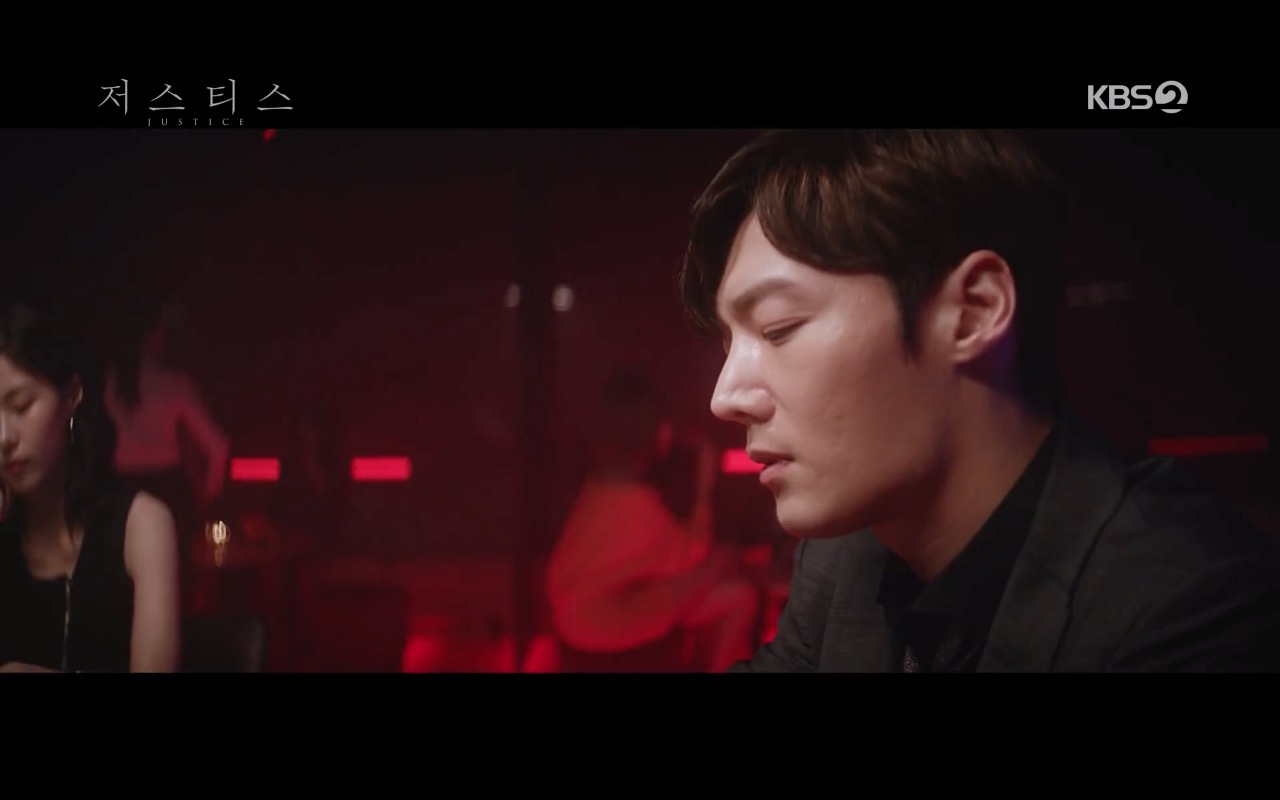 Our hero, so to speak, is LEE TAE-KYUNG (Choi Jin-hyuk). He’s an unscrupulous lawyer who does the dirty work for the wealthy, and Justice wastes no time giving us an up-and-close peek at what that looks like. Tae-kyung is busy boozing it up and gambling at some ritzy locale when he’s mysteriously called away. It sounds serious on the phone, but Tae-kyung is slouching in the back of the car with a lollipop in his mouth as he asks casually, “Is she dead?”

We soon find out that he’s been called to the suite of an assemblyman’s son who has gotten in some hot water. It’s clear to everyone (and I do mean everyone) that the kid has assaulted and raped the girl that was visiting him, but when we flash forward to his trial, Tae-kyung masterfully makes the assailant into the victim. The kid gets away; the woman is vilified. 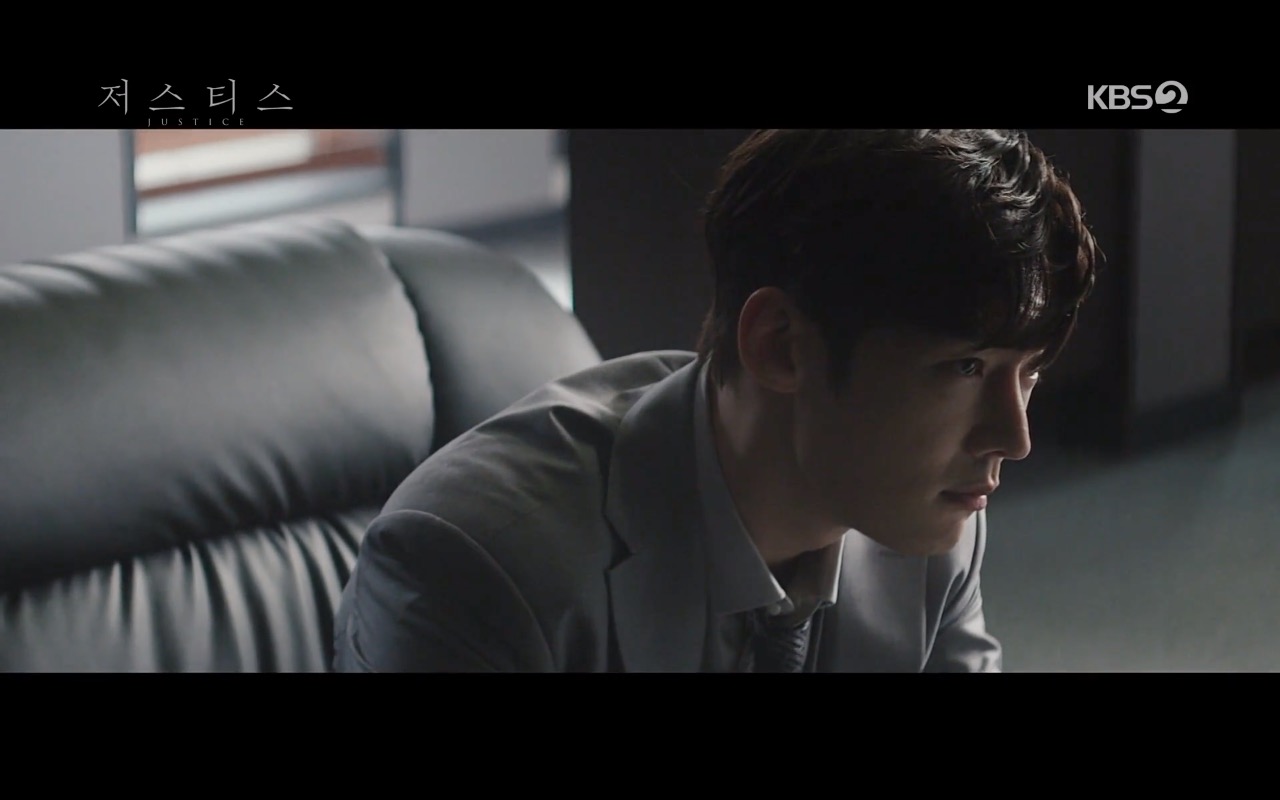 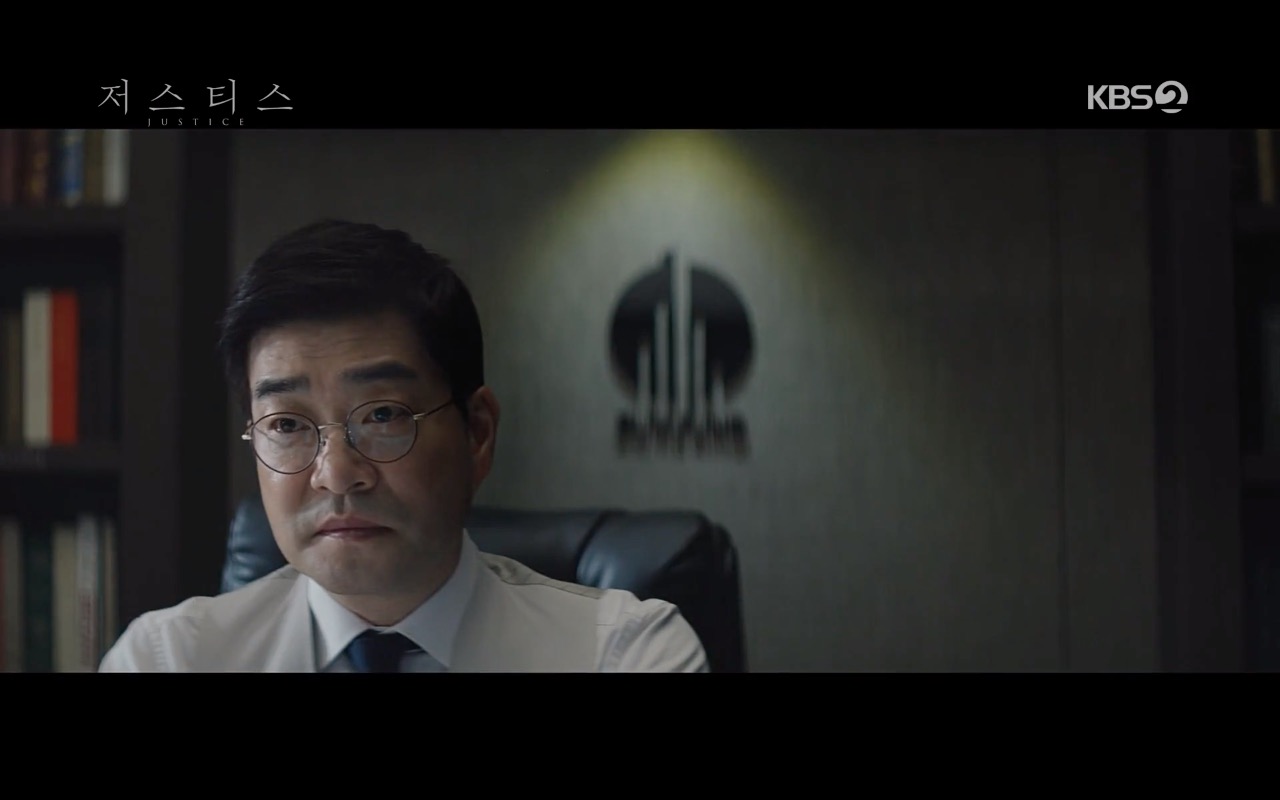 We’ll circle back to this case later on (because K-drama interconnectedness), but what we learn from these early courtroom scenes is important. Tae-kyung doesn’t care about truth, justice, right, or wrong. He cares about winning — and what he gets out of it, which are things like land, buildings, and red refrigerators bursting with cash.

Tae-kyung works directly with SONG WOO-YONG (Sohn Hyun-joo), Chairman of Beomjoong Construction, and the two seem to have a perfect set-up going. Chairman Song gets the higher-ups in the palm of his hand by using his genius attorney to help them out of sticky situations (like the court case above). Beyond being driven by this desire to be at the top, the Chairman’s motives aren’t fully revealed to us yet (but there’s a 99.9% chance they are no good).

He also uses Tae-kyung’s skills to remove any “rotten links” in his own path to success/power. In the case of Episode 2, it’s a thug named YANG CHUL-KI (Heo Dong-won). Though this seems like a one-off case at first, it winds up later setting off a huge (huge!) chain reaction in the plot. 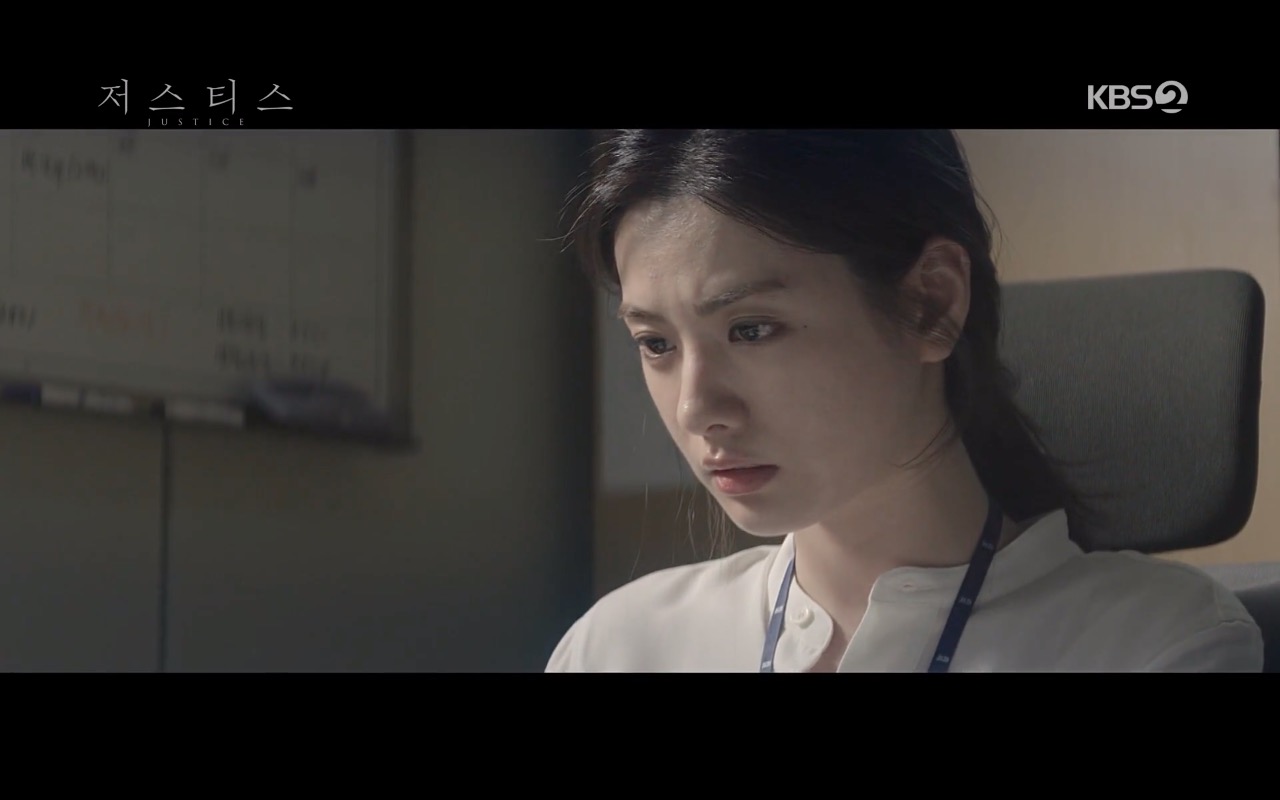 Also in Episode 2, we get more of an introduction to Prosecutor SEO YEON-AH (Nana). She’s clearly the opposite of Tae-kyung in every way — she’s committed to the law, justice, and isn’t afraid to fight it out.

There’s a great scene where Yeon-ah runs into Tae-Kyung and Chairman Song outside of the courthouse. That we can feel the history between these characters before we even know what it is, is a testament to the well-honed script. The three have fought it out before, we are led to believe, and though they’re civil and even playful, we know there’s a lot of history between these three. 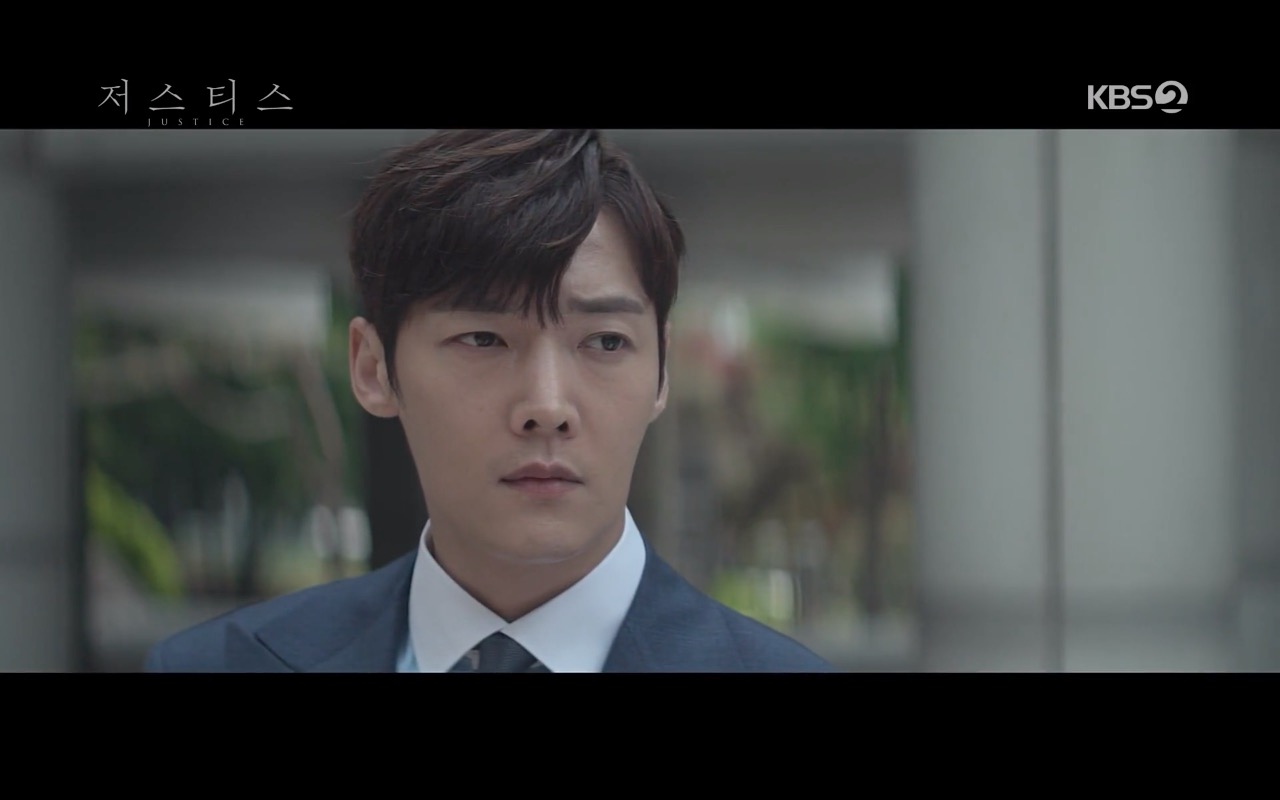 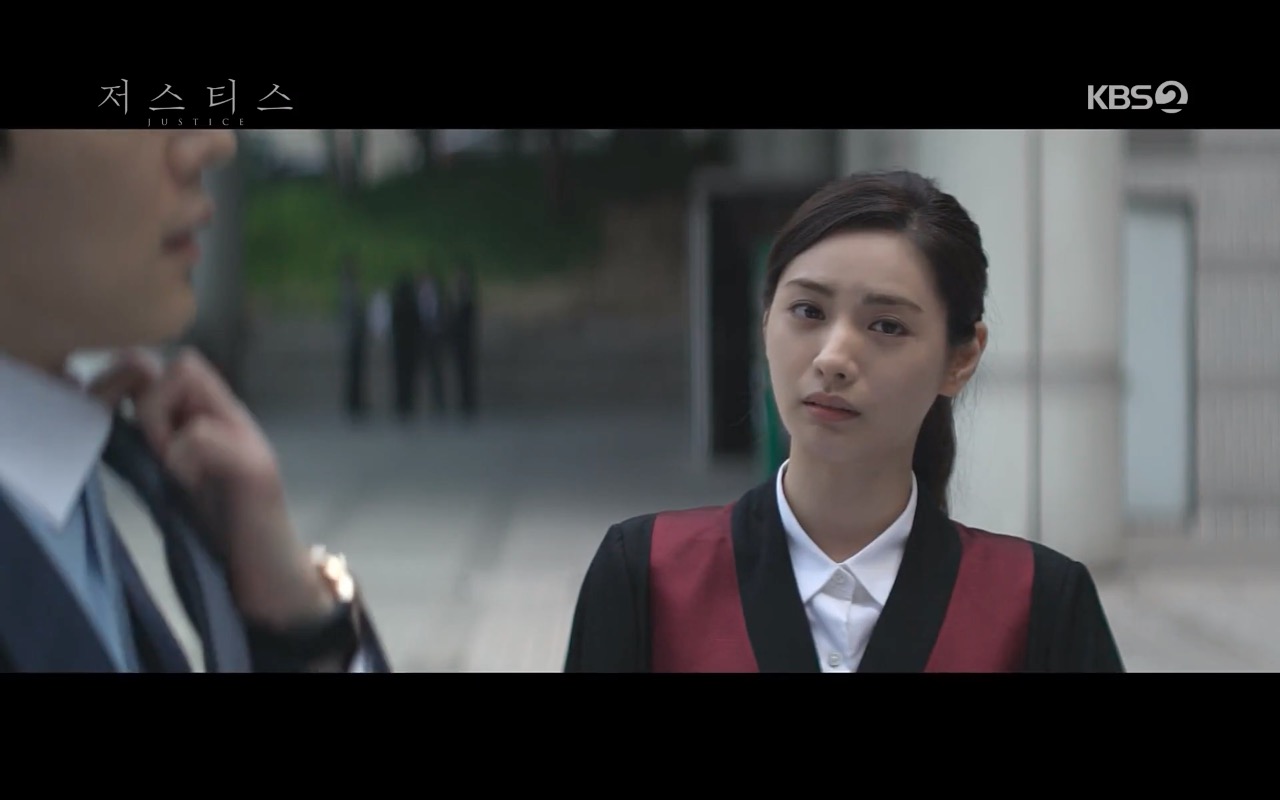 Justice is based on a web novel of the same name, and it really shows in the look and feel of the drama. Both the direction and editing are slick and stylized, and it works so well for the story the drama is telling.

I love the attention in each and every shot — even the establishing ones are intentional, sharp, and fit the mood of the drama. Flashbacks and reenactments are used a lot in the first few episodes as well, so when we hear about past crimes, we see them (in all their gory detail). 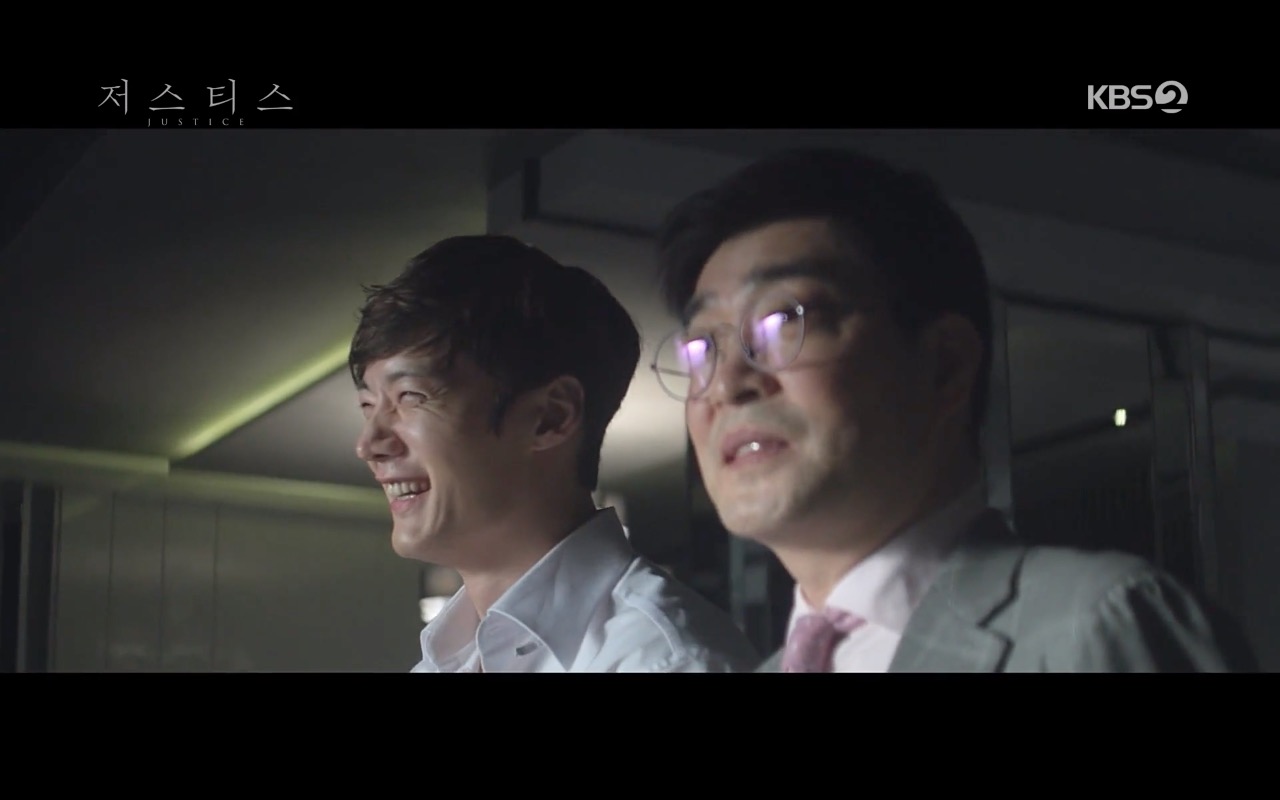 The juxtaposition of who he was, and who he became, is already being revealed, and it will be interesting to watch it unfold. Where the drama really succeeded for me was in showing us where the “cracks” are going to be. We see first-hand the glittery veneer of the world Tae-kyung lives in — but we also see where it’s all going to fall apart.

The cases and people Tae-kyung gets involved with in the first two episodes of the drama are not only tied to each other, but tied deeply to Tae-kyung’s past. From his rapport with Chairman Song, to the suspicious details surrounding the tragic loss of his little brother, to the convergence of characters that shouldn’t be, but are, connected — the pieces of the puzzle are slowly coming together. 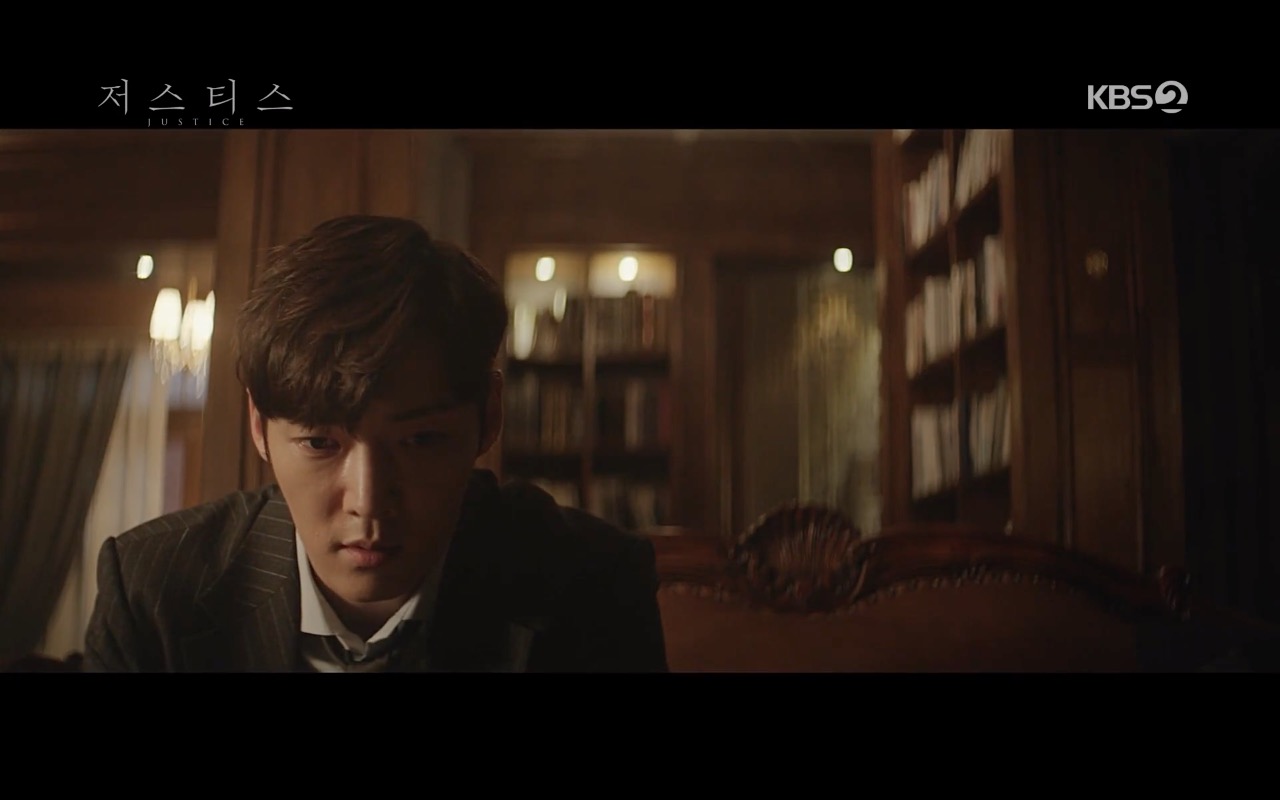 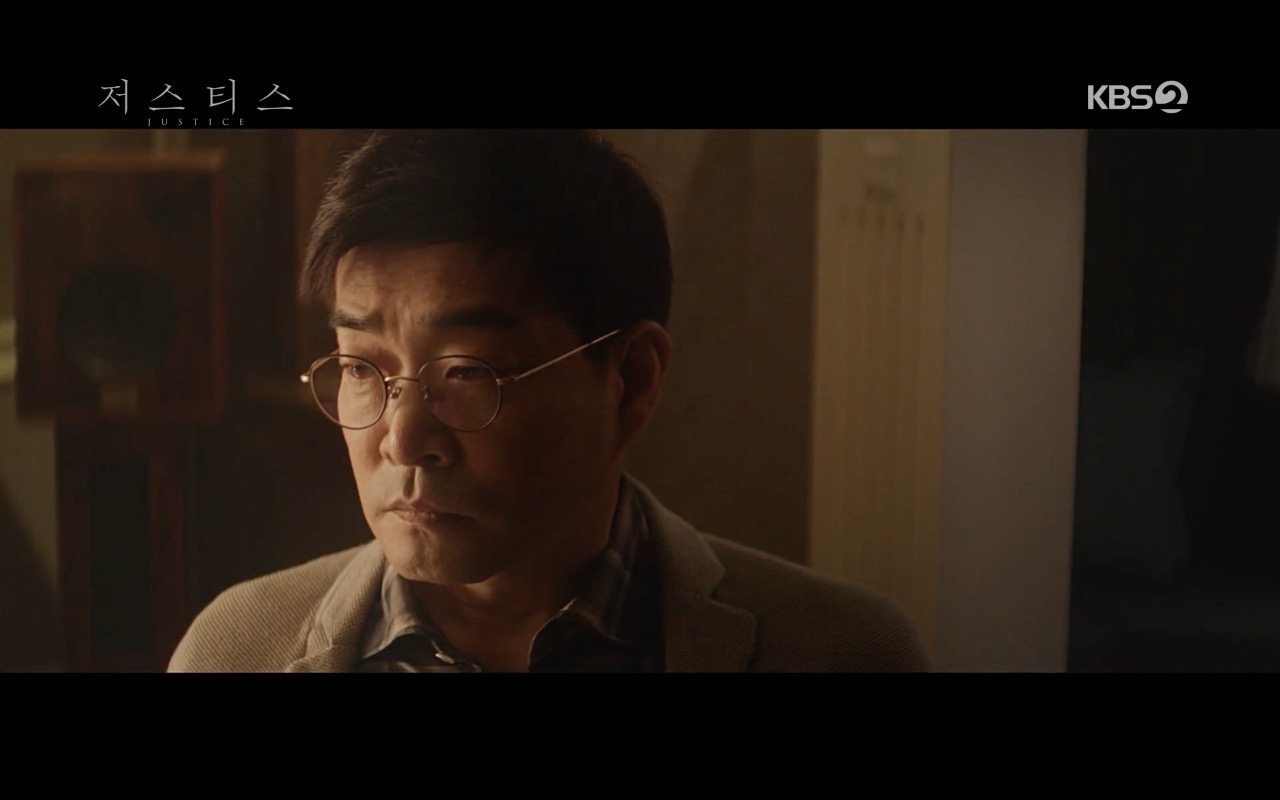 While our first look at Tae-kyung is as a hotshot lawyer with no rules (moral or otherwise), in the space of just the first few episodes, we see many other sides of him as well. I’m already invested in his story, and I’m even more interested to see how he changes as he digs deeper into these cases. It’s no secret that it’s going to get personal — or that Chairman Song is more involved than we first expected — and a battle of wits awaits us.

This role is a fantastic fit for Choi Jin-hyuk, especially after seeing him last in An Empress’s Dignity. He performance in Justice so far is dead-on. It’s amazing how much nuance, detail, and authentic emotion can be drawn out by some good directing. I’m pretty sure I saw Choi Jin-hyuk stare himself down in a mirror in An Empress’s Dignity too, but if it was flimsy there, it’s electric here. It’s nice to think he’s found a role that will put his onscreen gravitas to good use. 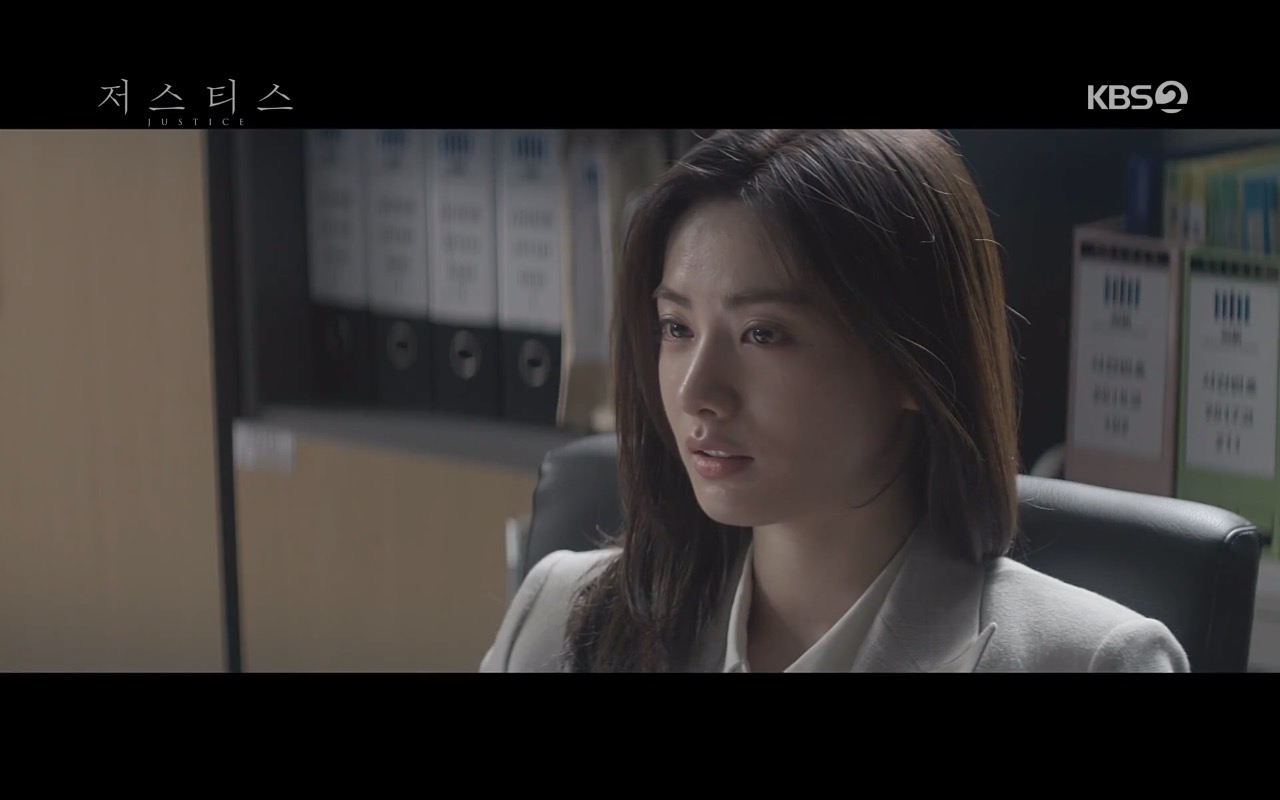 Nana, on the other hand, seems pretty standard. I like that she’s found her niche, and she’s good at it (and I respect her for not banking on her gorgeous looks), but I don’t feel like I’m seeing anything from her that I haven’t seen before (yet?). But again, the bottom line is that direction makes all the difference. Nana can play practically the same role here that she did in Kill It, but in Justice she’s interesting and well-drawn, instead of being two-dimensional and predictable.

The drama also has a fantastic supporting cast that I can’t wait to see more of. Just to name a few favorites so far: the scary Kim Ji-hyun as a higher up in the Prosecution, the gorgeous henchman of Chairman Song played by Jang In-sub (*stares*), and Lee Dae-yeon (the security guard from Flower Boy Next Door who I forever love) as Nana’s mentor. 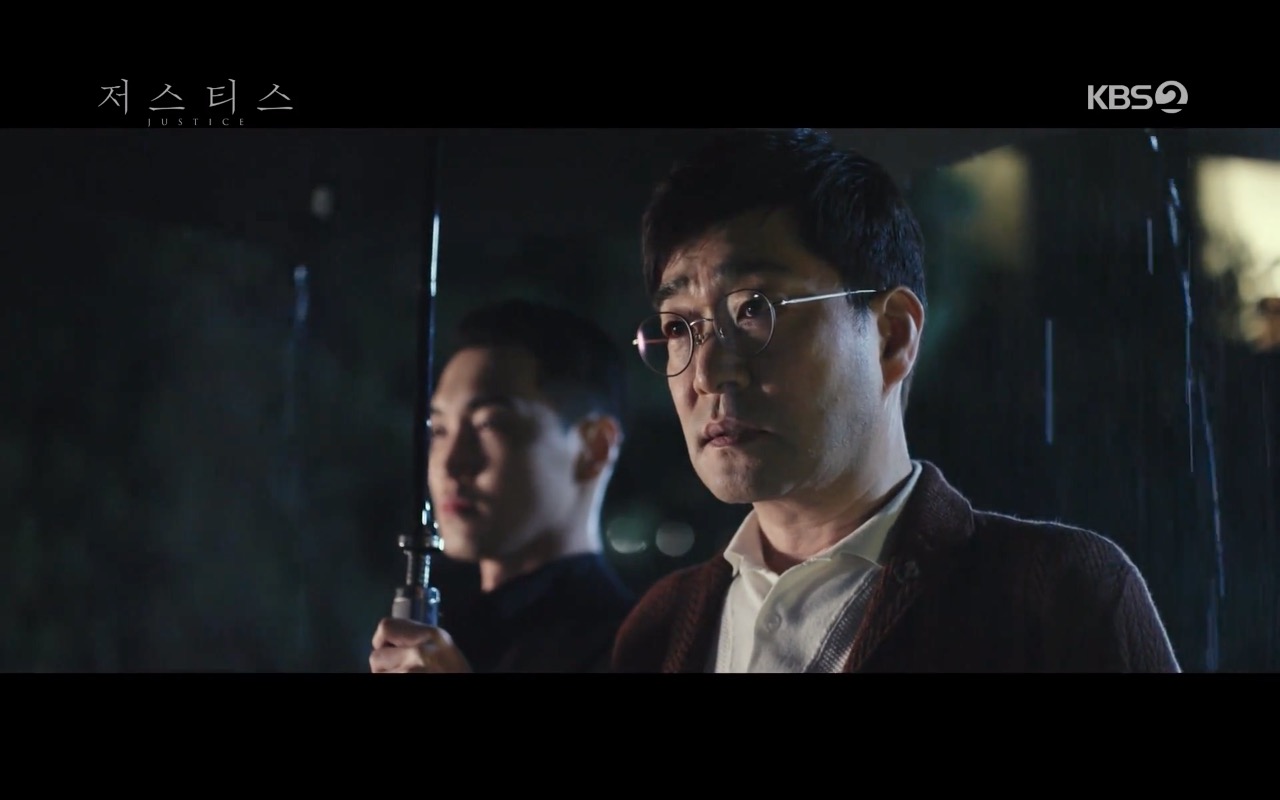 If the drama continues as strong as it has begun, there will be some rich storytelling as we watch Tae-kyung react to what he uncovers. I expect there will be loyalties a-shifting and lines a-blurring as the truth is revealed. Between the smart and sharp direction, and the compelling and twisted story that’s just started to unravel, it looks like Justice will be quite the ride. 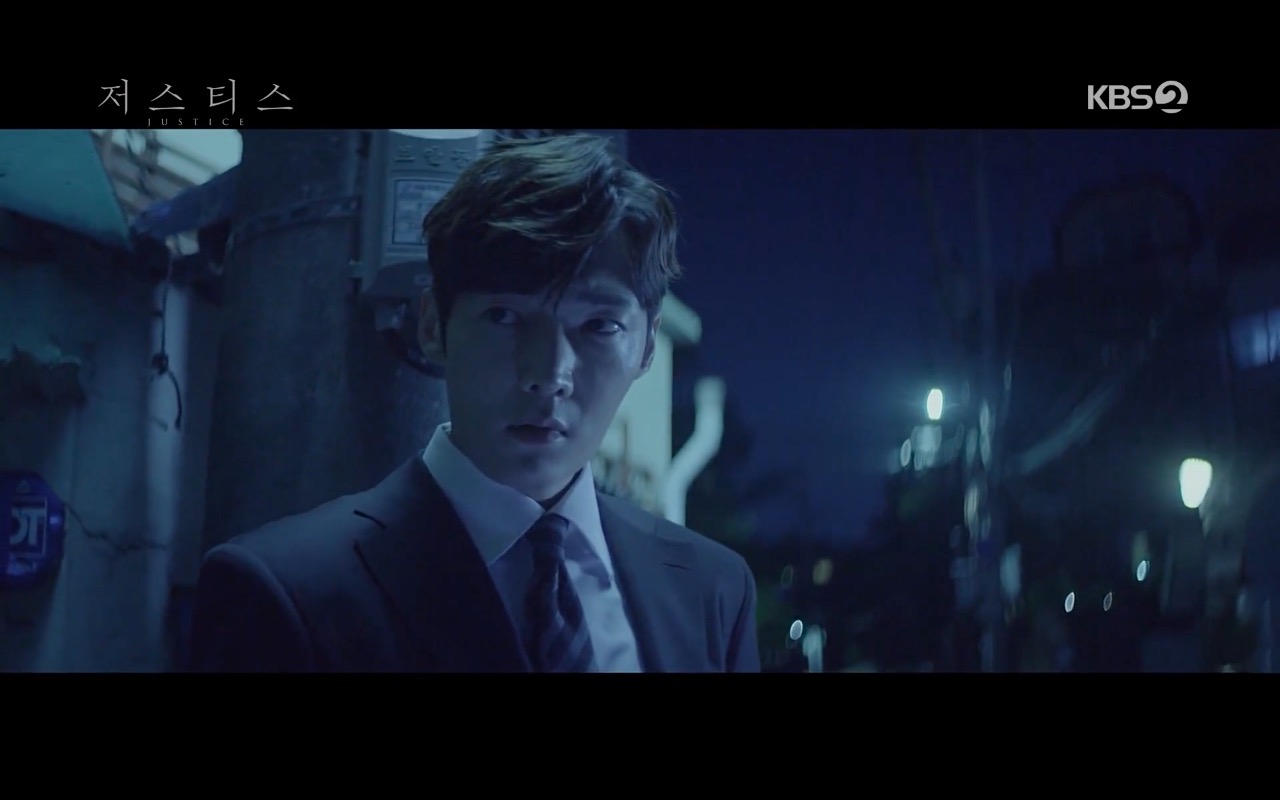 i love what you wrote and agree with everything! i love choi jin hyuk and am so glad this is a good fit for him and the directing will get them going somewhere in the story. i was skeptical at first but watching it got me involved right from the start and i can't wait to see where it goes with me on board. doesn't hurt to have jin hyuk to stare at either

and it love this new feature First Impressions! i think it will help a lot of us devout watchers wade thru the tons of choices and be able to choose ones that suit us without having to drop half the shows we start with. (not half for me but it helps!)

@diana-hansen Glad you enjoyed the new feature - be on the lookout for more! And yes, staring at Choi Jin-hyuk is time well spent. And a good story doesn't hurt either ;)

Just like to know your take on the last scene of ep32. Is it an open ended?

Wow, nice review! Execution makes all the difference, doesn't it. It's on my to watch list but I'm waiting for a couple more episodes to air since I like to binge - well, maybe - your review has made me want to start now (even though I'm totally obsessed with the c-drama The Untamed, which is also from a web novel, though a BL novel) .
I'm gaining a lot more respect for dramas made from web novels.

Thank you for the review! I guess it's too gory for me to watch, but I'm so glad Choi Jinhyuk got a good role after what they did to him in Last Empress. Hope this drama does well!

I wanted to love this show but I feel like they overcomplicated pretty straightforward plot. And I much more prefer regular thriller over everything is deep and connected conspiracy on top of another conspiracy, that plague kdrama crime genre. But I plan to watch at list up to 4 episode to see how they handle it.

But that's what I love about kdramas: overcomplicated, deeply connected conspiracy on top of another conspiracy.

I just finished the first episode. It is actually quite good. Some plot feel a bit OTT but the thing is, with the recent sketchiness surrounding SK law enforcer bodies, I keep on thinking "I wonder how much something like this happens rn at (insert famous club name)" " I wonder (insert name) have the same power to do this" etc and frankly, it kills my mood. A bit too close to real life

The story seems quite dark and captivating. I like it. I like the leads, too. Thanks for sharing your first impressions.

I agree with everything you wrote, missvictrix. I found the drama intriguing and compelling even during the first hour. I hope it wouldn't lose steam halfway like so many kdramas.

Finally found my k-drama crack for this quarter. Loving the drama so far. Choi Jin Hyuk is back with another good drama after my favourite Tunnel. And Sohn Hyun-joo on the board , its a pleasure to watch this. I am also liking the female lead, but it is funny how i dropped Kill it all because of her.
I love the details in the expressions of every character in this drama. Each one holds something deeper than we can ever imagine.

I just hope this one doesnt disappoint me halfway.Because with a least expectation i started watching this and i got hooked it before the ending of the pilot episode.

Justice's story may not be new in k-dramas, but the direction is something quite rare. It feels like noir movies. I appreciate that.

Thank you a bunch for sharing this with all people you actually
recognize what you are talking about! Bookmarked. Kindly also discuss with my
web site =). We may have a link trade contract among us