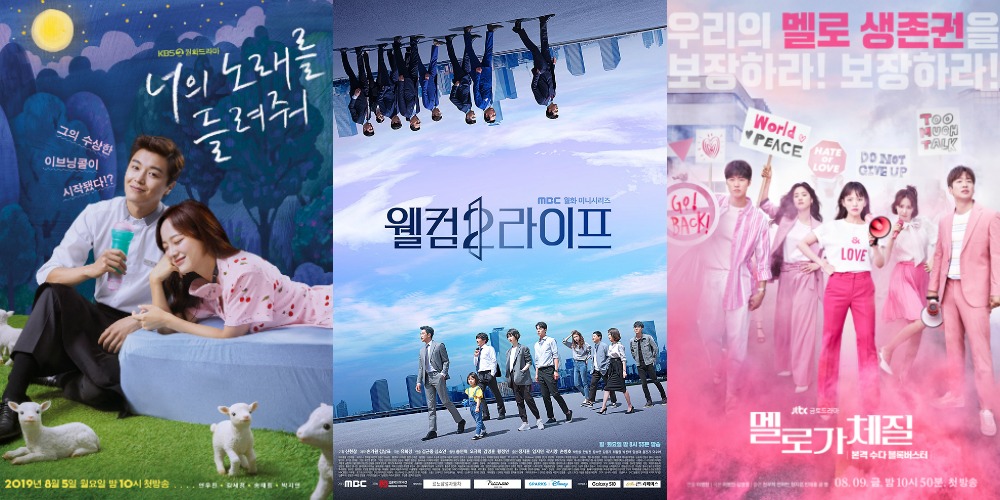 The July drama rush is over, and we’re starting off August with just three new dramas. With the pace of premieres slowing down, it gives us a chance to take a breather between each new show. Two of this week’s new premieres are an interesting mashup of several dramas (thriller-rom-com, fantasy-legal-rom-com) while our last premiere of the week is a take on adulthood very much rooted in reality. 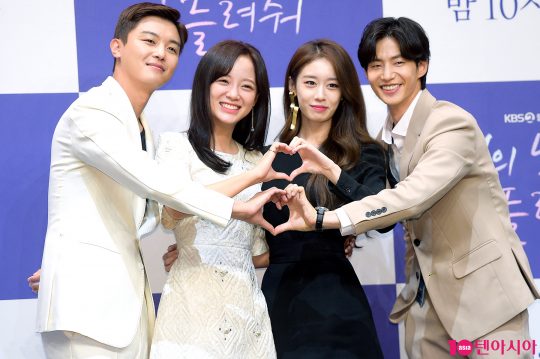 Reasons to watch: The plot centers around Kim Se-jung, a timpanist and insomniac. Ever since she witnessed a murder years back, she’s lost her ability to get a good’s night sleep–and all memories relating to the crime. When she meets a fellow orchestra member, Yeon Woo-jin, they somehow realize his off-key singing can lull her to sleep, and so begins a strange partnership of sorts: he sings her to sleep at night. Though Kim’s unsure of how much trust she can put into him, the two decide to try to solve the mystery of what happened the night of the terrible murder. Song Jae-rim and Park Ji-yeon have supporting roles as colleagues of Kim and Yeon. Song Jae-rim will be the conductor of the orchestra with Park Ji-yeon playing a talented and confident violinist. It’s been difficult to pin down what sort of drama this will be because the tone of the teasers and promo materials have been all over the map, but if the drama can strike the right balance between heavy and light material, I expect hijinks, healing, and romance. 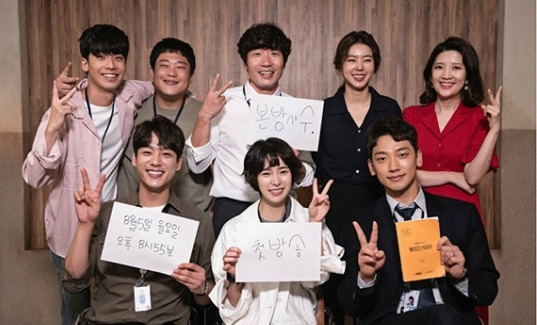 Reasons to watch: Rain stars as a man who falls into a parallel universe and must adjust to living in this alternate world while trying to figure out how to get back to the “real” world. In his original world, he was a powerful private attorney who really just cared about himself. In his new life, he finds that he’s a prosecutor and married father of one. The kicker? His wife, Im Ji-yeon, was his ex-girlfriend in the other universe. She is a police detective in both universes, though her life with Prosecutor Rain seems to have made her a more cheerful person than in the other universe where she dated Conceited Attorney Rain. Kwak Shi-yang plays her detective sunbae and partner, and interesting, unlike Rain, he seems to be able to actually travel between the alternate realities. While this makes me want to jump to conclusions (he’s a baddie!), it also makes for a whole range of interesting possibilities should Rain team up with Kwak. The drama is set to pose some questions about the paths people choose in life and what ultimately matters the most in leading a fulfilling life. 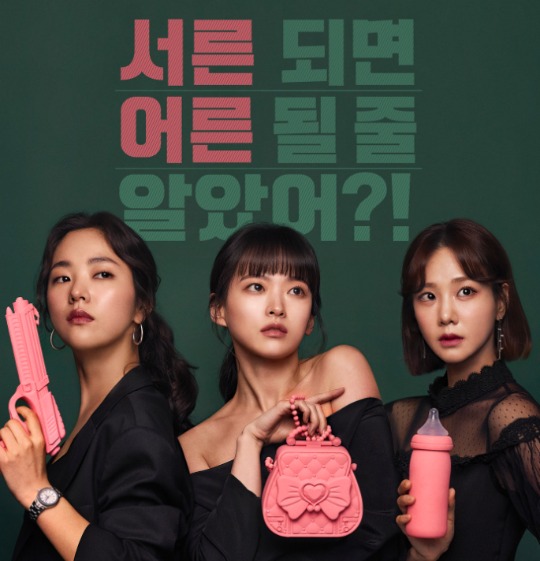 Reasons to watch: Chun Woo-hee, Jeon Yeo-bin, and Han Ji-eun star as friends in their thirties whose life circumstances suddenly force them to move in together. Though the three women are in their thirties (thus technically adults), they’re still finding their footing in life and the show will follow them as they juggle their careers, families, and love lives. On the romance front, Ahn Jae-hong will be playing a star PD who at turns infuriates and intrigues Chun Woo-hee. He’s incredibly arrogant, but when you get to know him, you realize he’s just a giant dork. Gong Myung’s loveline will be with Han Ji-eun. He’s the newest hire at her drama production company and though he’s a sweet, mildmannered man, their potiential relationship is complicated by the fact that Han’s a single mother and his boss. Added bonus, film director Lee Byung-heon (Extreme Job) makes his drama directing debut with Be Melodramatic. I’ve seen his film, Twenty which was a coming of age story about three young men who were best friends, so I trust that he’ll be able to tell a story about strong friendships but with three women this time.

The late MAD Magazine was the home of such games.

By the way, episode one was interesting enough to make me want to watch episode 2.

I envy the girl who gets lulled to sleep by Yeon Woo Jin’s voice. Off-key or no, it’s one of my favourite voices in dramaland.

Totally agree with you! His voice is manly and yet gentle, so expressive. So happy he’s in a new drama!!!

Melo Suits Me is the one I am looking forward to. I will find some time on the weekend to watch it.

August doesn't have much to offer. I'm looking forward to the September dramas instead.

that melo suits me cover is amazing.

also whew....INSOMNIA is a mess. i am actually interested now knowing that's a premise. shout out to the people with insomnia/hyposomnia/terrible sleeping

I'm excited for Melo Suits Me, and Let Me Hear Your Song sounds bonkers, so I'll probably check that out too. Although I like the alternate reality angle in Welcome 2 Life, I'm so tired of lawyer/prosecutor themed dramas that I think I'll pass, at least for now.

If Welcome 2 Life was focused on anything but lawyer/prosecutor, I would have watched it. What a shame.

It was good try to watch it.

I'm looking forward to Melo Suits Me. I hope it's good!

I might give the other two a try if reviews are good, but Let Me Hear Your Song sounds like a potential hot mess, and I'm not particularly a fan of the cast of either drama.

Ok but like can we talk about Im Ji Yeon's new hairdo?? Um like yes please!! She looks so precious in that hairdo and smile T-T

It really is a cute haircut. A bit Amelie.

Let Me Hear Your Song sounds like a big mess, but I'm still curious!

There is the mini drama 17 Years Old's Condition that looks good. I love both actors and they know each other very well already so they have a good chemistry.

@kurama, 17 YEAR OLD is on Kocowa under the title EVERYTHING AND NOTHING (4 episodes).
I just happened to spot it today when I was checking out availability of the new shows. Good news. All are available on either Kocowa or Viki.
Of the 3 new shows Rain’s drama grabbled my attention when it was first announced.

I watched episode 1 of EVERYTHING AND NOTHING...wow. Just wow...

In a good or bad way?

In a teen way. Time comes and goes but some things stay the same.

Not even shocked that the tutor did that. Dude just had cad written all over him.

I am so excited for Melo Suits Me. Really need some good slice of life feels to end the summer and cozy into autumn.

No drama has caught my attention yet, at least not since sky castle, so i'm gonna try them all and see if one of them sticks.
I’ve been really into the whole parallel universe genre lately so I'm excited for Welcome 2 Life, though a bit annoyed about the prosecutor/lawyer thing, so tired of that.

@johahaeyo,
Then in 2020 there will be Lee Min-ho’s comeback drama THE KING: MONARCH OF ETERNITY with parallel worlds.

It's one of the dramas I'm most exicted for!!

I really want to watch JTBC's BE MELODRAMATIC. PD Lee Byung-heon and Chun Woo-hee <3.
I hope this is going to be a hit drama for PD Lee.

Melo Suits Me sound like something that could fill the empty space that WWW left.

Yes, I am so excited for it, please be god show!

And okay just be good... (not really god)

Hoya?! This would totally have slipped by me, thanks. It's only 6 episodes too, yay!

I want to watch Melo Suits Me for my love Gong Myung, but where do I find the time??

The first episode of Let Me Hear Your Song is a weird mix of every genre in Dramaland but it works! And no, it is not because I love the cast. HAHA

And I am looking forward to Melo Suits Me. I need more female-centric shows in Dramaland.

I think I’m gonna have severe SLS for “Welcome 2 Life” and “Let me hear your song”. But in the meantime, I’m totally gonna check out “Be Melodramatic” because of my love for Ahn Jae Hong.

Anyone knows about "Everything and Nothing"?

It's 17 Years Old's Condition under another name. It started yesterday on SBS. But there is only 4 episodes.

@kurama, 17 YEAR OLD is on Kocowa under the title EVERYTHING AND NOTHING (4 episodes).
I just happened to spot it today when I was checking out availability of the new shows. Good news. All are available on either Kocowa or Viki.

I’ll be watching too. It’s with the child actors of THIRTY BUT SEVENTEEN. 😊

Yeah! I read they knew each other before, they were in school together I think. They were cute in Thirty But Seventeen.

I like this actress. She was really great in Seven Days Queen. She had a great chemistry with Baek Seung Hwan (who is in 17 years old condition too) and surprisly with Lee Dong Gun too.

Wtached epsiode 1...it left me quite speechless.

Me too. I think I never saw so much condoms in one drama, even less with teenagers. It changes of the usual teen kdrama.

Yeeeesss, two premieres I'm excited about this week. Song sounds like the kind of bizarre, illogical mashup that just might turn out to be lots of fun, and Melo feels like it's going to be very emotionally relatable, and I'm all for that.