Premiere Watch: The Great Show, Hell Is Other People 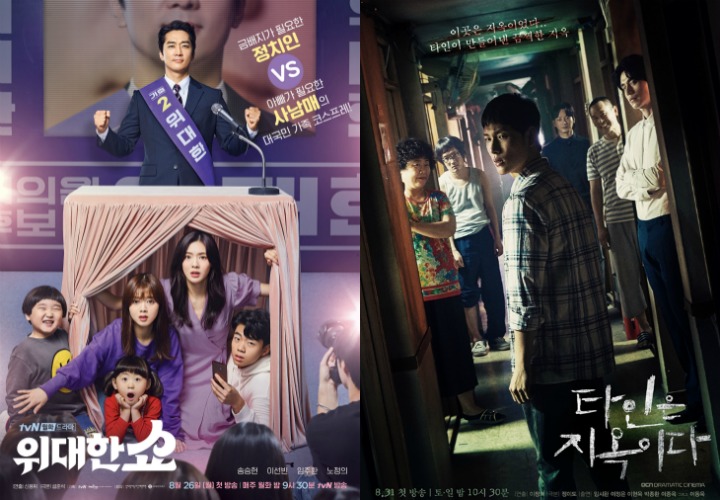 We have laughs and chills coming up this week’s latest premieres. 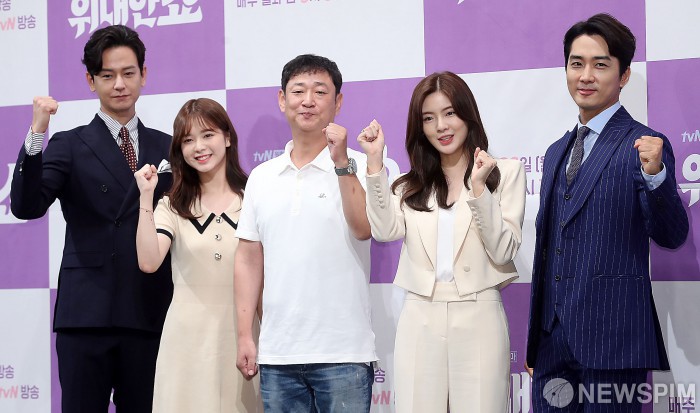 Reasons to watch: Song Seung-heon headlines as a former assemblyman who fell from grace due to a family scandal. Post-scandal, he’s just spinning his wheels when Noh Jung-eui shows up on his doorstep claiming to be his daughter (with her three little siblings in tow). There’s nothing he wants more than to return to the National Assembly, and he sees a path back to power with Noh and her siblings as his props. Though their family outing starts out as a charade, the children will end up having quite an impact on Song’s character and life. He’s not the only one, as Lee Sun-bin’s character finds herself back in Song’s orbit because of the four siblings. Though Song was her first love, there’s some bad blood there as he became the one person she never wanted to cross paths with again. Im Joo-hwan’s character is a both a rival and a bit of an antagonist to Song. The two go back 21 years, but their history is complicated and not quite friendly. I love a good dramaland schemer! And with My Fellow Citizens over, I’m up for another good political comedy to watch. 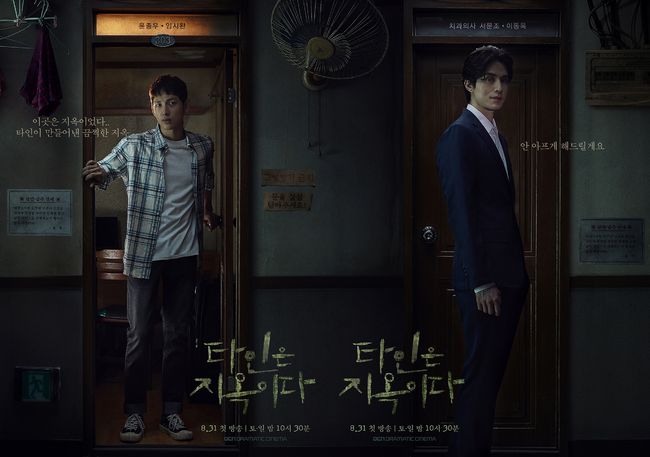 Reasons to watch: Adapted from a chilling (and popular) Korean webtoon, Im Shi-wan moves from the country to the big city and city life isn’t what he hoped it would be. He manages to find a room in a cheap goshiwon and though he seems to have a nice landlady in Lee Jung-eun, the other residents are all a bit off-putting. We’re not talking stolen peanut butter and empty toilet paper rolls, more like sinister laughter while staring straight ahead, and random cursing and threats. Luckily, Im manages to make a friend in Lee Dong-wook so he’s not entirely alone, but is Lee Dong-wook truly the nice, friendly person he appears to be? I’m looking forward to seeing Im Shi-won make his post-army comeback and I hope we get to see Lee Dong-wook play against type and tackle something darker than his usual nice guy characters. This is the latest installment of OCN’s cinema-drama project.

Tags: Hell Is Other People, Premiere Watch, The Great Show

Oh no, I'm excited for both of these! Days need more hours in them.

Bring on the jump scares, Hell Is Other People!

Hmm... I want my OCN/mystery fix, but Hell Is Other People looks too creepy for me. Dx

Hmmm.... these articles always have a "Reasons to watch" section, but will we ever see "Reasons to skip"?

Lol 😂. Even with 'Reasons to watch' section, I skip dramas on a regular basis.

Maybe there should be "Reasons to skip" when the show has finished?

great idea!
but then again, it might be unfair for those who loved it.

it is the (nasty) Beanie battles I fear...

I think “Reason to watch later on” is better due to you have kids and especially if you have special need kids. Unless you are retire or or those rich 1% who have plenty of times. Rock on watching all these dramas for us poor peeps. LOL. I am gonna pass on these two and watch it later on. I am already watching some current ones and can not get into new ones yet. Happy watching new shows beanies. Please let us know how is it for us. =)

Both interesting! If I only had time!!!!!

Or energy and rich. LOL

Does anyone know if The Great Show will be on Netflix or Viki?

Thank you very much! I swear I looked there 😬

I can't find it on viki

First I thought: how old is Lee Sun-Bin's character supposed to be? The actress is 26 - so if the two go back 21 years, they met when she was 5 and SSH was 22. I was having a hard time figuring out what very odd encounter that must have been.

Then I realised that I misread it, and it was the SSH and Im Joo-hwan's character who have a 21-year history.

Never mind. I'll probably give this one a miss anyway.

Hell is Other People, on the other hand, looks very interesting. LDW could be so creepy. Isn't his character a dentist? Yup - I'm already scared.

I had an appointment with a dentist today who had an unbelievable resemblance to Lee Dong Wook. And now I see this article while still recovering from the shock and the suppressed laughters.

I think I need a new dentist.

I think you do!

It is! I am still reeling from it!

And you can't exactly ask your dentist to take a selfie with you!

No... no... that would be a whole other drama, creepy patient and clueless dentist...

She isn't playing a 26 yrs old in the show. He is her first love. Why the massive age difference, I haven't the faintest, they should have cast someone at least born in the 80's, but alas here we are. I am watching because I really liked the first episode, but rl age difference is 18 yrs.

I was like “what” at him being her first love and college sunbae. They should have cast someone closer in age, but to me, she looks older and he looks younger so I probably wouldn’t have given it a second thought if I wasn’t aware of the rl age difference.

Lol, I agree. But it's a lot, he could be her very young father.

The last thing I saw him in was Black, where I thought he looked to be quite old to be with Go Ara. And then, Go Ara is still seven years older than Lee Sun Bin

We are so spoiled. I remember when we used to have only 6 week day dramas from the big 3s. Fridays was all variety shows and the weekend belongs to the family dramas and sageuks with 50+ episodes.
Now we have so many we have no time to watch even half of what's being offered.

The Great Show: I wasn't really looking forward to yet another political drama but the first episode was good and it looks like it will be both fun and touching.

Hell Is Other People: I've missed Im Shi-wan but this may be too creepy for me.

I didn't realise both were premiering this week.
Watching K-drama is a full time commitment i tell ya. Maybe if someone asks if i'm dating i should say yes - a different oppa for everyday of the week! >.<

He manages to find a room in a cheap goshiwon and though he seems to have a nice landlady in Lee Jung-eun, the other residents are all a bit off-putting. We’re not talking stolen peanut butter and empty toilet paper rolls, more than sinister laughter while staring straight ahead, and random cursing and threats.

I don't know why this made me LOL. And I'm excited for both shows premiering this week! BUT TIME???

Thanks for the heads-up for THE GREAT SHOW's premiere, @stroopwafel! I get to swap Ji Jin-hee for Song Seung-heon in a National Assembly building that will (hopefully) remain intact. Having just finished Tdrama BEFORE WE GET MARRIED (at times excessively melodramatic, with two truly bonkers/obtuse main characters and a memorable BFF) and the excellent LOVE AFFAIRS IN THE AFTERNOON from Channel A (often bleakly realistic but deftly nuanced -- with a wonderful soundtrack) , I really need a shot of fun and games right about now. DESIGNATED SURVIVOR: 60 DAYS had some humor to offset the main story, but I'll be glad to see SSH pulling a more lighthearted scam than Assemblyman Oh and Tailor Kim, and using little kids as his secret weapons to boot. I finished marathoning SLINGSHOT / STORY OF A MAN yesterday, and it was all kinds of terrific. It had a pair of cute little sisters -- and Park Ki-woong as the immortal Mazinger Hunter -- who stole the show. I'm looking forward to more of the same from THE GREAT SHOW -- minus Kim Kang-woo's sociopathic mayhem.

I'm giving HELL IS OTHER PEOPLE a pass. Having seen the stage play NO EXIT many years ago (from which the Kdrama takes its title), I know I'm not up for existential despair. After reading earlier reports on it, I've already had flashbacks to the horrors of college dorm life, and I don't mean cafeteria food.

did anyone watch hell is other people? i want to be a sheep and go by recommendations i don't want to decide for myself if it's good or not lmao but i am super looking forward to it so im scared to start :O

how could anyone see it when it's sat-sun

There, there. It happens to the best of us. You just have to tune up your crystal ball. ;-)

@boughtabride You aren't the only one! My first thought was, "How did I miss this premiere???" Only to see that it's still coming up. :) Soooo many Saturday/Sunday shows right now!

It's so creepy, I was taken aback by it. Haha probably won't watch it before bed again. It's a really interesting plot so I'm going to continue, I'll just fast forward past the jump scares.

I'd say 95% of the dramas I really, really want to watch are never on Viki, my only go-to for kdramas.