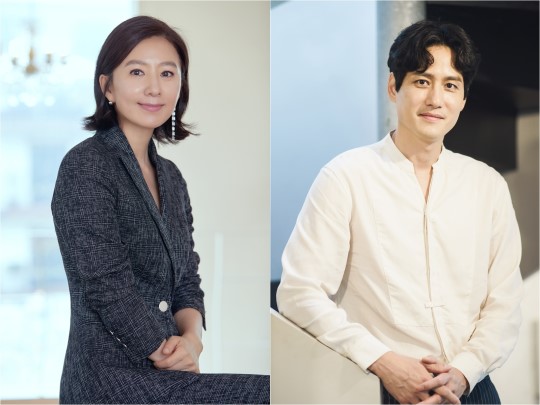 After 4 long years, Kim Hee-ae (Second to Last Love) has confirmed she will be returning to dramaland in JTBC’s upcoming Friday-Saturday drama A Couple’s World. Joining her in the drama is actor Park Hae-joon (Arthdal Chronicles) who also confirmed casting.

The story of A Couple’s World delves into the relationship between married couples when the love that you once becomes broken by a partner’s betrayal. And it examines the psyches of the individual parties as that broken trust spirals into a tense cycle of revenge, complicated by feelings of both love and hate for one another.

Kim Hee-ae plays the central character of Ji Sun-woo, a self-made woman who specializes in family medicine. She had once felt blessed in her life to receive unchanging love from her husband, raising a dutiful son together, and having accomplished both wealth and fame in her career. But everything comes crashing down after discovering that her husband had been unfaithful and that the people she loved had betrayed her, and, in a drastic turn, she becomes determined to take revenge.

Park Hae-joon takes on the role of the husband, Lee Tae-oh. His dream was to become a director, but, in reality, he runs an entertainment talent agency which was started with assistance from his capable wife. Although his love for his wife is still true, on the spur of the moment, he makes an irreversible and risky mistake which sinks him down a path of despair.

On the production team for A Couple’s World, PD Mo Wan-il (Misty, Beautiful Mind) is set to direct and writing will be done by writer Joo Hyun (Ms. Temper and Nam Jung-ki).

He looks much better as Moobaek hehe.

I prefer the tanned Mookbaek too.

If they make a second season, will Moobaek send to find Olmadae to cover his absence? :p

For the actor, for me, he passed from no hair to long hair... It's kinda weird to see him with a "normal" haircut now.

At least the actor gets to take actions here (read: revenge, an irreversible and risky mistake), instead of being a narrator/by-stander.

I think Moobaek should be sent to find Magic Horse. That is a more pressing matter than Olmadae for Season 2. 😉

I thought Magic Horse was the kind of "We don't find it, it finds you".

Moobaek is good at finding those. He found the Byeoldaya. And he did met Magic Horse once before. We can keep our hope up, right?

Go watch 'A Wife's Credentials' and the torrid 'Secret Love affair' for some superior Kim Hee-ae. I can't recall if I even finished watching 'Second To Last Love', though.

I've been praying for a reunion between Kim Hee-ae, PD Ahn Pan-seok and writer Jung Sung-joo who has been MIA-ing since 2015.

I loved A wife's credentials and secret love affair, but I finished Second to Last Love just to ogle at Ji Jinhee. Lol.

I think I will watch anything Kim Hee-ae is in!!

Is this one of those 50 episodes drama??

hold up second to last love was four years ago?????? WOW. i miss seulgi kim (why i watched it and have seen it like 5 times) but her and ji jin hee..wow. beautiful.

hopefully this is good. i hate cheating but i love (in dramas) watching the fall out and how people deal with it. more often than not tho it gets worse as it goes along in terms of story

Sounds too melo for my taste.

just yesterday I was crying to the Secret Love Affair soundtrack, so I am happy to have more Kim Hee Ae in my life

I thought Chocolate was supposed to air after Itaewon class!