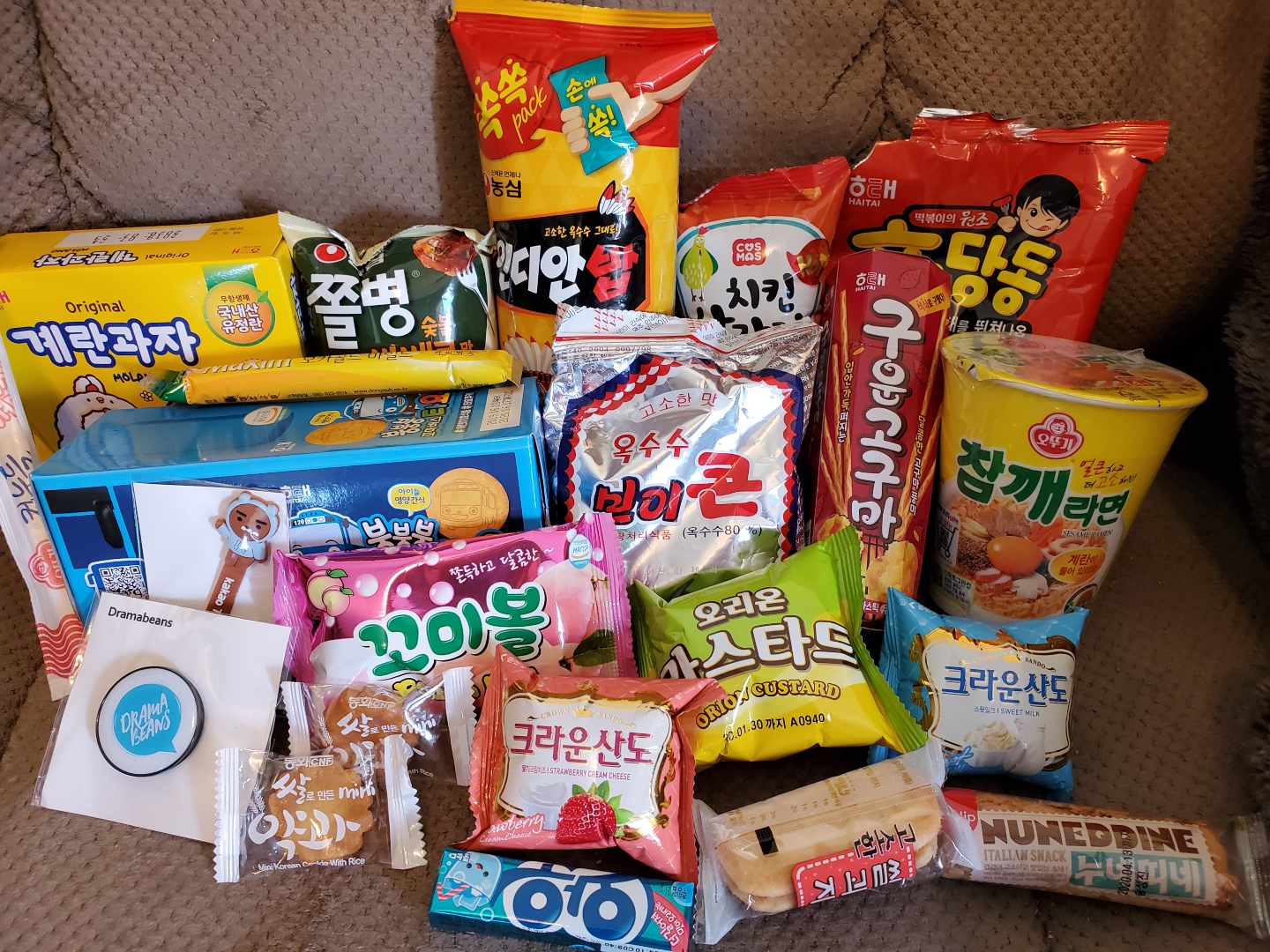 It’s been a while since we’ve been able to update you on our new monthly snack box, the BeanieBox. While our lips are sealed (for now) a BeanieBox announcement is coming soon! Until then, here’s a snack preview of what’s to come. We asked @lollypip to give the BeanieBox a try and gifted the first month’s box.
– DB Staff

I was so excited when I was offered the chance to review our new BeanieBox, because there’s really nothing I love more than snacks, and I think this is a great idea! I’ll start off with a grand sweeping statement — the BeanieBox is AWESOME. I’ve had so much fun discovering all the delicious things I’ve never tried before, and the experience has been positive from start to finish.

To begin with, I was impressed from the very start, because I received two emails on September 8th regarding my BeanieBox. The first said that it was on the way and provided a shipping number, which I don’t think I’ve ever gotten from an overseas company, and I order a lot from overseas. The second email had a picture detailing every item I would be receiving in case I wanted to know ahead of time, with information on each snack, since obviously the packaging is in Hangul. So I knew in advance (or could — I chose to be surprised) what I would be getting and exactly what day it would arrive. So far, so good!

My BeanieBox arrived on September 20th, exactly on time, and it was jam-packed with goodies! Twenty different kinds of snacks and some swag. My six-year-old niece happened to be over at the time so we sampled some of the snacks, and we both agreed that everything is delicious! Our particular favorites were the “Sindang-dong ddukbokki snacks,” which taste exactly like if ddukbokki came in a bag of chips — sweet and spicy, and SO addictive (I have a trip planned to Hmart next week, and if they don’t carry these, I may cry)(Follow-up: THEY DO!), and these rice crackers that seem plain at first, but once you get used to the flavor, they’re wonderful. 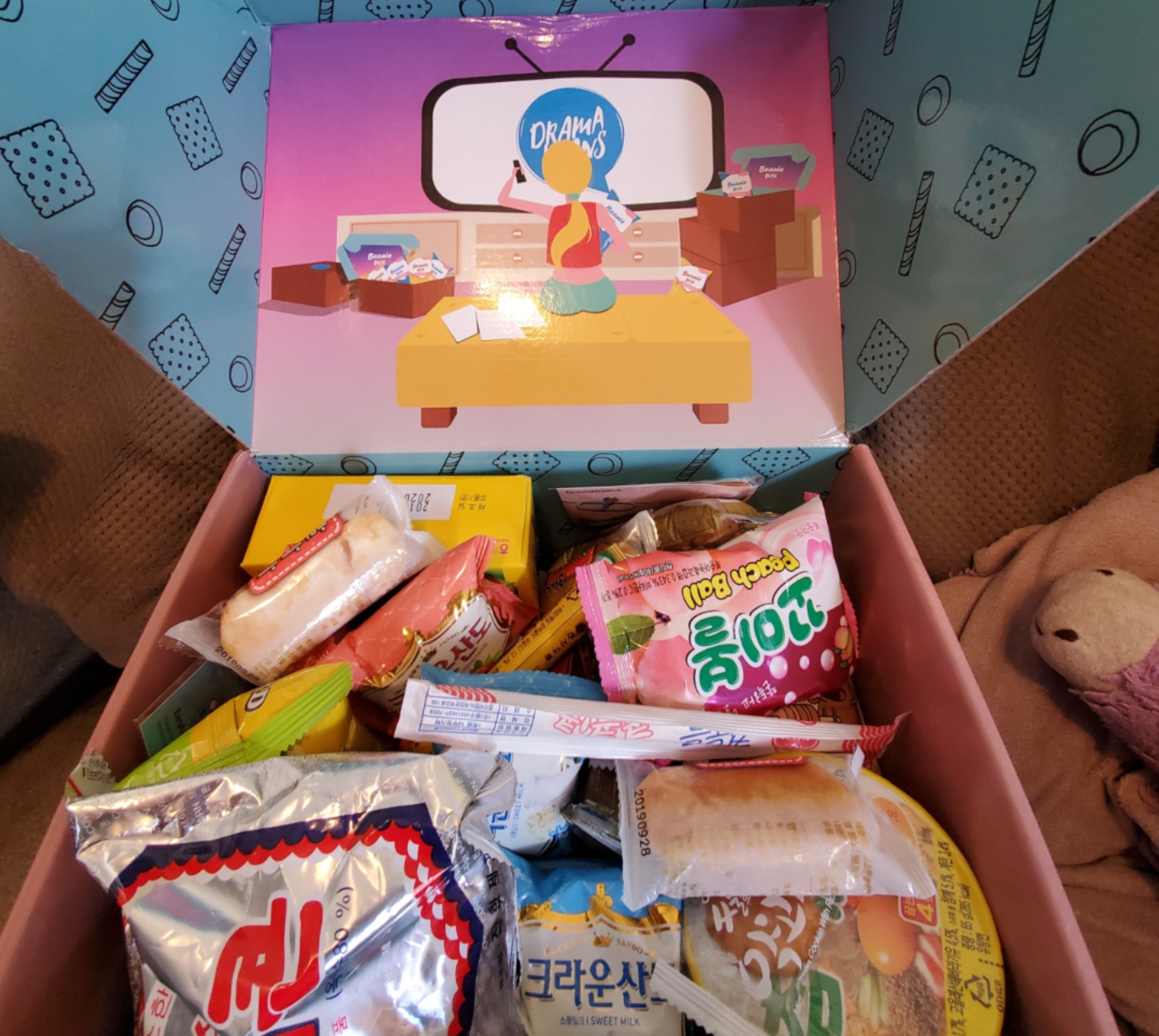 Over the past week, I’ve tried so hard to slowly sample everything, but it hasn’t been easy, because every single snack I was sent is something I can see myself buying and eating in large quantities. And despite coming in a deceptively small box, every snack was provided in large enough quantities that I didn’t feel that I plowed through them too quickly. One day I even had an entirely BeanieBox lunch — cup ramyun, spicy chicken snacks (like Cheetos but spicy chicken-flavored) and a sweet custard-filled muffin. These were either full-sized bags (imagine if a single-serving Doritos bag came actually full instead of being half air), or if the items were packaged in small amounts, several were provided. There was ramyun, sweet chips, spicy/savory chips, cookies, pocky, muffins, candy, and even gum, making the box a wonderfully diverse adventure into Korean snacks.

Now of course, nothing is perfect, and I do have one tiny negative. While the swag I got was fun, there were only two items — a charge cord organizer with a Kakao Talk character on it, and a Pop Socket with Dramabeans’ logo on it. I love them, and both are currently in use, but I would have happily traded two or three snacks for a few more items of swag.

That said, it wasn’t enough to take away from my happiness with my BeanieBox! I still have a few snacks to finish off, and I’m saving several packages to take shopping next week to hopefully try to buy more. And I’ll definitely be signing up for a monthly BeanieBox, because if they’re all as great as this one, the snacky adventure will be well worth it! 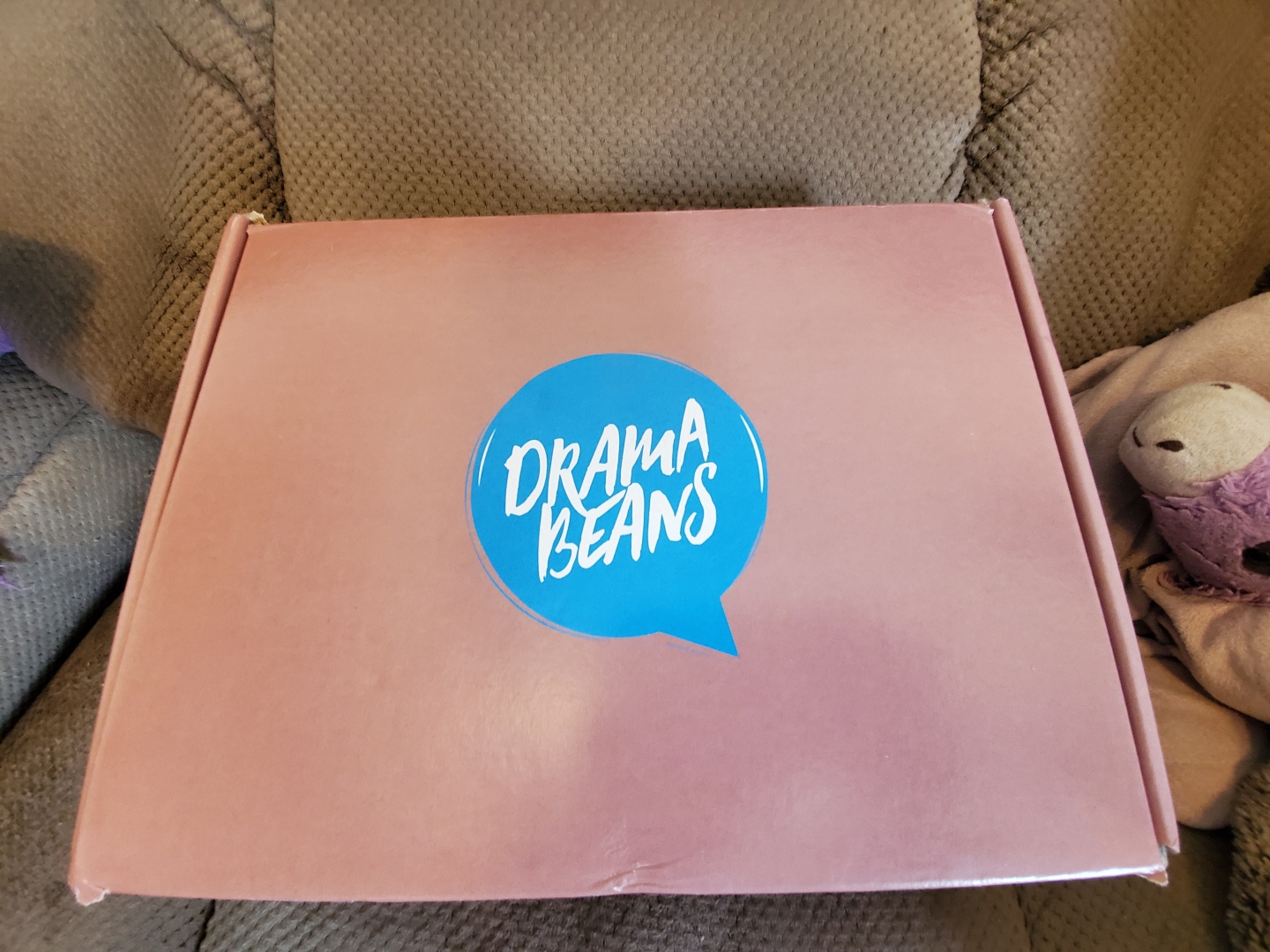 I’ll start off with a grand sweeping statement — the BeanieBox is AWESOME.

As someone who was lucky enough be able to get the chance to try the BeanieBox, I wholeheartedly agree with this statement.
If it was between DB Swag and some snacks. I would want more DB Swag too. I also got a good chuckle out of the half-air Doritos bags comment ^.^
Basically, your review was super on point, @lollypip, thank you!

I love this, even though I'm half crying with envy 😭😭😂

I went to Hmart to get those ddukbokki chips after you tweeted about them, and now I’m addicted. Thanks a lot! (half sarcasm)

I don’t know if I can handle a beanie box because I know I would eat the whole thing within 3 hours of it arriving at my house.

I would have happily traded two or three snacks for a few more items of swag.

I would be the opposite: Snacks Over Swag.

This makes me even more excited for the launch of the BeanieBox!

That's awesome that the email explains what everything is! I was wondering how that would work since most of us (including me) don't speak Korean 😄
When will the beanie box officially launch?? How much will it cost???

I was one of the lucky winners of the giveaway and I agree with you on trading some of the snacks for DB merch. But that's just me. Loved my pop scocket but sadly it won't stick anymore. 😥 However the snacks are delicious, so much, that I haven't tried all of them because they will run out too soon. Looking forward to the launch of the subscription service.

That ddubokki snack is legit. So good!!!

I KNOW, RIGHT? They're just the perfect amount of sweet versus spicy and very light and crispy.

I plowed through 2 full-sized bags faster than the smaller bag I got in my BeanieBox, because now I know I can get them anytime, lol. Hard to slow my roll on those things...

wow, that seems super! I can not wait for receiving the box!