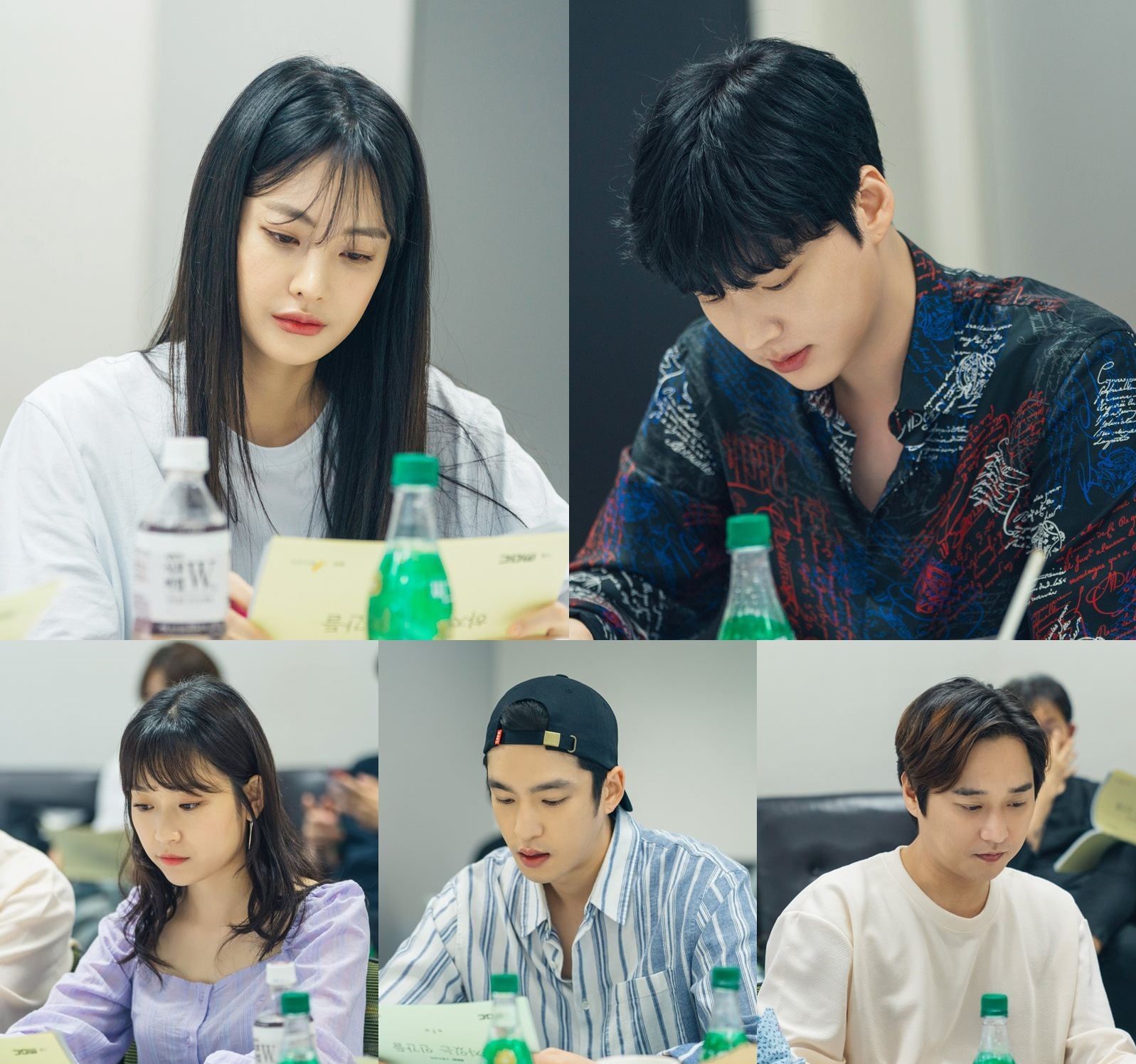 New stills have been released featuring the script reading for MBC rom-com People With Flaws, headlined by lead actors Oh Yeon-seo (Hwayugi) and Ahn Jae-hyun (Beauty Inside). The entire cast and crew were present so we also get a look at Kim Seul-gi (Lookout), Goo-won (Legal High), and Heo Jung-min (Top Star Yoo-baek).

As the drama title states, the central plot is about flawed individuals and we have Oh Yeon-seo playing the lead role, Joo Say-yeon. She’s passionate phys-ed teacher who has a severe aversion to “pretty” men and “flower boys.” Her ideal man is utterly normal. Co-starring opposite her is Ahn Jae-hyun playing the conceited and vain Lee Kang-woo. He thrives on attention and is obsessed with appearances. As the two meet and clash, they become more aware of their internalized prejudices and misunderstandings, and they fall for each other as they learn what true love really is.

In supporting roles, Kim Seul-gi and Goo-won both play teachers at the same school as Oh Yeon-seo, with Kim teaching Korean and Goo-won teaching health. Heo Jung-min plays entertainment agency CEO Park Hyun-soo, who is said to have a unique relationship with Kim Seul-gi’s character.

Rounding out the supporting cast are Hwang Woo-seul-hye (Drinking Solo), Min Woo-hyuk (The Third Charm), and Shin Do-hyun (The Banker).

Writing for the drama is Ahn Shin-yoo and directing will be helmed by PD Oh Jin-seok (My First First Love), who previously worked with Oh Yeon-seo on My Sassy Girl.

MBC’s upcoming Wednesday-Thursday drama People With Flaws is currently set to premiere towards the end of November, following Extraordinary You 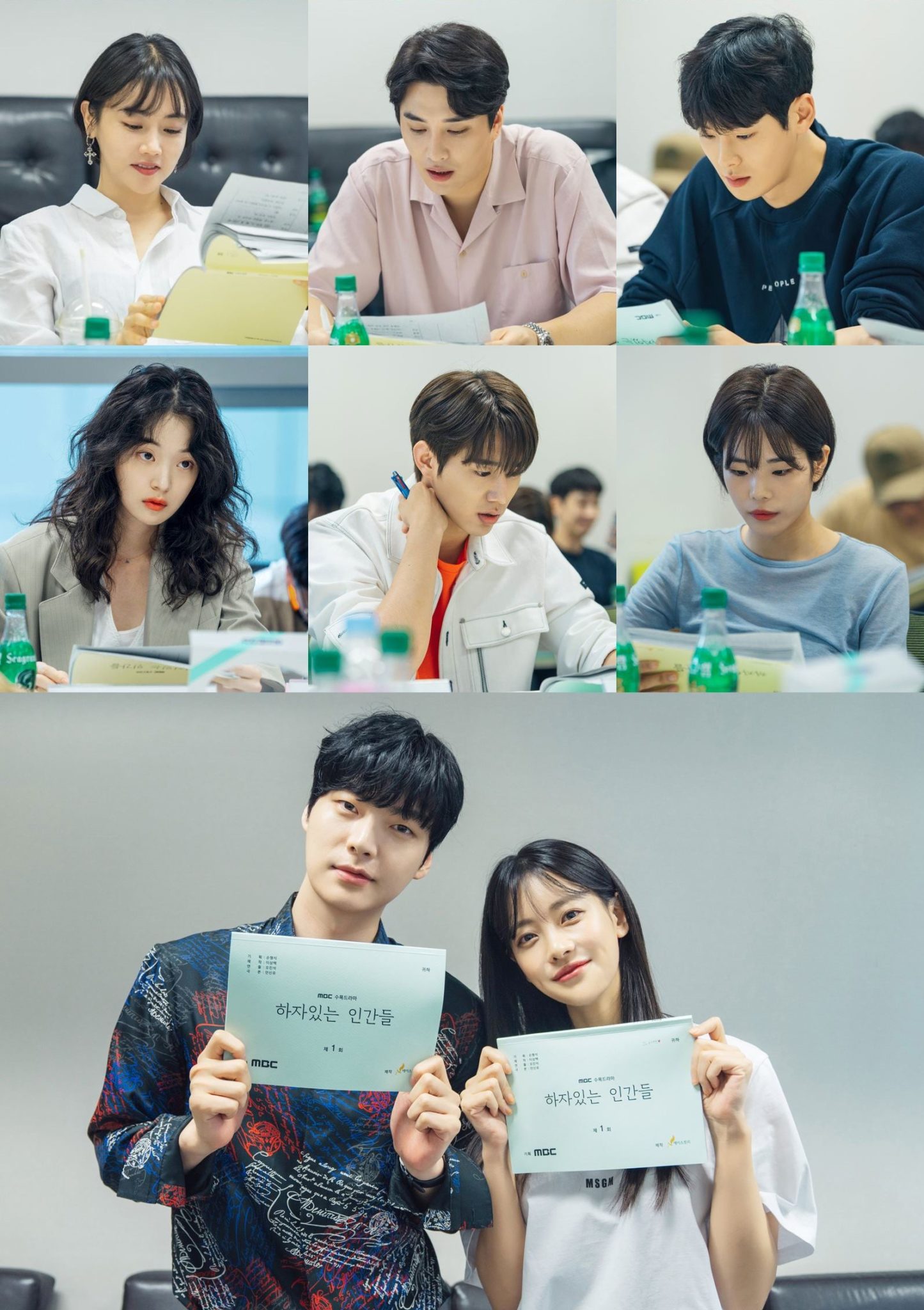 If it has Kim Seuk-gi I'll have to at least start it, but...

... premise sounds dull, writer doesn't seem to have any track record (on Asianwiki), PD & male lead haven't impressed me in the past, and female lead makes me cringe after Hwayugi.

Oh well, it's a Wed/Thu show so I'll have other stuff to watch if it's a lemon.

aaaanything with Kim Seul Gi is worth giving at least one chance. :-)

At least for her.

Who is Kim Seulgi?

SHAYRIIIIIII
I AM DISAPPOINTED IN YOU
Kim Seulgi of Oh My Ghostess, Splish Splash Love, Surplus Princess, Lookout fame. The Queen of Scene Stealers and People Who Should Be Lead?????
The Kim Seul gi?

The lead girl from Splish Splash Love? I haven't seen the other dramas 😅
Okay I might be persuaded to jump on board.... Maybe. I found 2 actors I liked now.

I love KSG but sadly she has been so neglected. She really deserves all the leading roles 💔

Yess!
I'm with Cobol on this, the story and crew don't interest me, despite loving Seul Gi haha.

She's the absolute best part of almost every drama she's in. You might need to watch Flower Boy Next Door (at least fast forward to her small portions) and Lookout. Lookout is an awesome drama (except for a small portion of the last episode).

I did read something about *that* on mdl sjsksksk 🤭😆

Don't let it stop you watching Shay. The journey is worth it.

Noted. Even with 1 bad last episode, it can't be that bad can it?

Ahn Jae Hyun is such a bland actor.

You can say that about pretty much more that half of the actors that headline dramas.

does that do it 4 ppl? like is that enough? genuinely curious

The only thing that sounds interesting about this is Kim Seul-gi, and even she might not be enough.

The premise is not my cup of tea but it might be interesting if it is a comedy that does not take itself too seriously.

I wish the drama and cast all the best. They faced quite a huge 'drama' and presevered. Fighting!

Kim Seulgi is in it? Funny, I was just thinking about her yesterday. Such an underrated actress but I am happy beanies seem to like her :D

Well, Ahn Jae Hyun is not a leading material, but I feel for him and I wish him luck.

Sadly, Ahn Jae Hyun's divorce scandal (which dragged Oh Yeon Seo into it) has completely turned me off this show. I feel sorry for him, but I don't think I can get into the characters or plot -- they've been upstaged by his real life Instagram divorce drama😫

Why can't we separate reel from real?! I mean Hollywood actors do crazy stuff all the time and people still cheer ,go to the movies n throw money at them but we have different reaction to Korea actors?! ......divorce is normal blangelina did it n they are still rocking n it was the biggest scandal of all

Uhm it's not their divorce per se, it's what they posted. It was extreme even by hollywood standards, going even into nipples (no that was not a typo) and release of their private chats. Im not a prude by any means but it got really ugly. Even my friends who work in asiam entertainment media outlets said it was the worst theyve seen.

Wow, Korean scandals... I wouldn't have believed it, but well... They are also humans. I don't know if I should criticize it in my mind or pity him/her (whatever), not that they care. But yeas, I understand why some would pass his dramas if, as it seems to be, he was the ugly one.

It seems this kind of theme has been repeated so many times. It seems boring. AJH is not leading material, he doesn’t command that presence. I hope the rest of the cast makes it interesting. I hope this drama does well, will give it a try.

Agree and hoping this drama does well. Oh Yeon Seo is a wonderful actress.

Omg why are there so many haters comments in this section pretending to give neutral opinion the drama hasn't even released teasers yet n u already know what its about? We have had many hayped drama which disappointed after premiere and many low key drama that became mega hits..sky castle etc
Stop being judgemental and the male lead had stopped taking lead role for four years to do second lead role and build himself up....he shined in his last two series and his couple even outshined the lead couple in his previous drama

Just like with anything, you'll make judgements on the information you're given. The information makes the drama sound a bit bland and uninteresting. Doesn't mean people wont change their opinion as more information is provided. Nothing wrong with this.

I also beg to differ that his couple outshined the main couple (if you are speaking of Beauty Inside). Sure his romance in the drama was cute but I personally still preferred the main couple. I think my issue is he seems to not have improved from when he first came onto the scene until now. He fits a very specific character which he does fine in but all his characters tend to feel almost exactly the same, no matter if they are supposed to be different. I still personally think he isn't ready for a leading role again, I just dont feel he has the acting chops or charisma, but he could surprise us all. I'm always willing to give the benefit of the doubt.

Agree he hasn’t changed much. I hope it changes my mind...will watch.

well when they put out info for the show they know people are going to judge it. criticism or praise are both informed. and people can be surprised. but our past experiences and opinions color the 'now' it's human nature

Also with Korea standards Kim sel GI will never get a lead character... Sad but the hardcore truth ...its not just about acting there....we have plenty hallu status actors that can't act and will always b picked over her eg Suzy,park shin hye...again sad but true

anything is possible...you're most likely right but there are lots of different(?) looking female actresses out there getting leads. i hope she does more movies that challenge her but she's got a lot of charm (like gong hyo jin.) she can get further and it would be nice to see her in a lead role. i am also tryna be optimistic, because then that'll never change and acting is seriously not about looks it just gets painted that way cos We Live in A Society

I came to chuckle about the drama title because of the irl drama.... 🤣🤣🤣
_____ I see the amazing man from Immortal songs (the SML from Third Charm) in the cast... But the rest sounds pretty boring.

It's been a long time since I've seen Kim Seul-gi on my screen....

Rewatching (again) Splash Splash Love. Sad, most of her co-stars have their own lead drama. :(

She'll just steal the drama. It will be fine.

SHOUT IT FROM THE ROOFTOP

I am quite keen for this show because it sounds quite light hearted. There seems to be a lot of heavier or dramatic shows lined up. I like the actors and hope the show can be somewhat successful for their sakes.

Ironic how AJH is in a drama called people with flaws. Gu hye sun doesn't know me but would have loved to watch this drama just to spite her. I'm petty like that. Never watched a drama of the female lead. Don't even know any of the supporting cast🤦🏾🤦🏾. What's AJH occupation. Is he also a teacher?? Let's see how it goes. If its a one epiosde drama or two before dropping it.

Not really. His dramas doesn't draw me in

was NOT planning on that. goddamn i msis her

I"m not Korean and I have observe how Knetz behave when it comes to showbiz. I saw their comments to Oh Yeon Seo as a reaction to what Goo posted in the social media. Though Goo's accusation were entirely baseless, comments from Knetz were so intense and inhuman. I found it so uncultured.