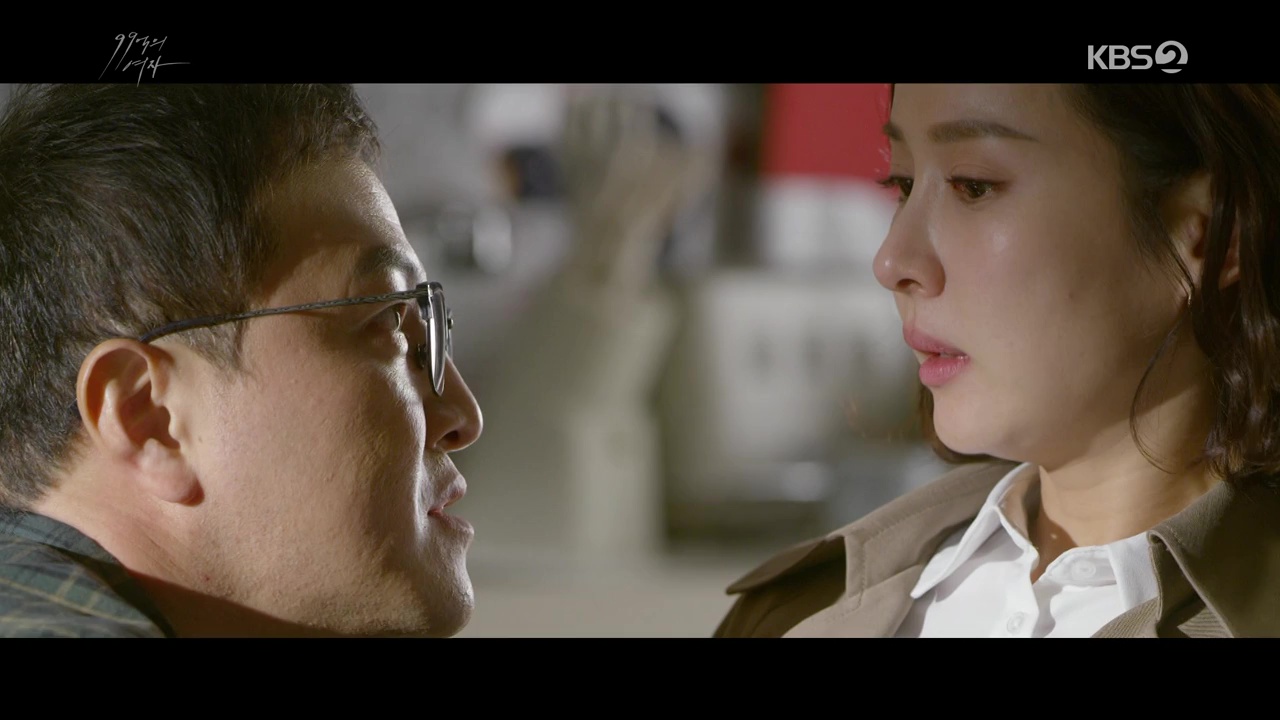 It would be an understatement to say this is an “edge of your seat” drama! As it turns out, stealing the 9.9 billion won was the easy part for our heroine (and I wouldn’t call that easy). Though she may have new enemies, she’s also forming new alliances — and our heroine is sure going to need them. 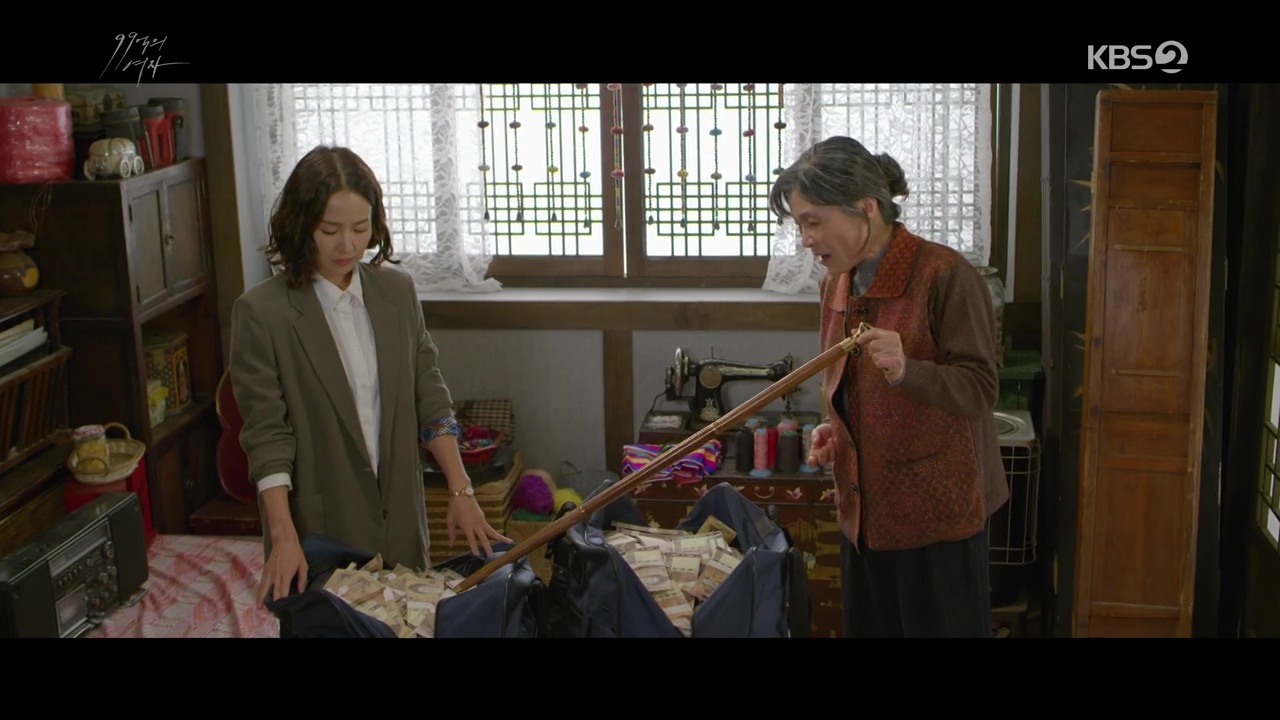 Seo-yeon wakes up after taking refuge in the house of JANG GEUM-JA (Gil Hae-yeon), and it turns out this mean-spirited woman was once a well-known money lender in Myeong-dong. Now, she’s known as Grandma Jang. They strike a deal where Seo-yeon will pay off the debts on her house if Grandma Jang will do one thing for her. “Teach me how to launder money,” Seo-yeon asks.

The laundering of her huge amount of cash turns out to be tricky. Grandma Jang’s contact is a thug known as Black Bear, and he’s not only pretty nasty, but interconnected to the very thugs Seo-yeon stole the money from. Seo-yeon holds her own as best she can against this scary dude, but things start to get hairy. What better time for Tae-woo to bang down the door in rage? Turns out he has a vendetta against Black Bear as well. But more than that, this scene reunites Tae-woo and Seo-yeon and wraps their story together a little more tightly. 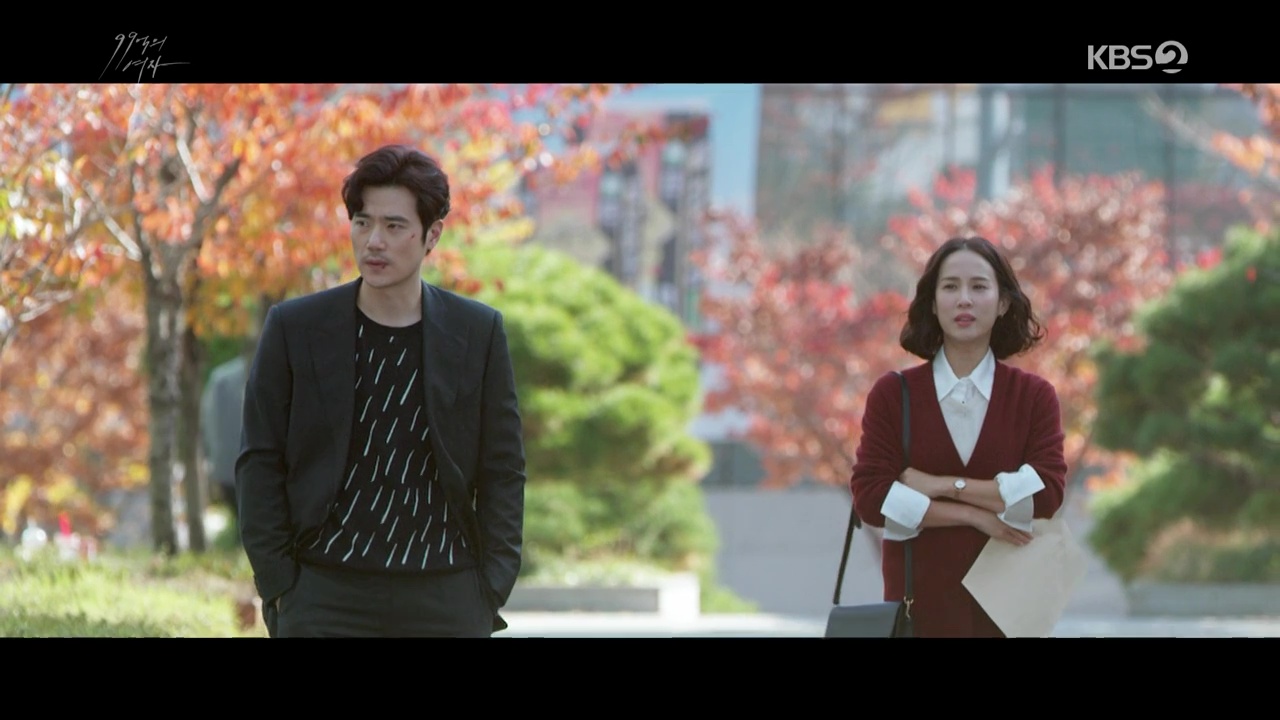 When they parted last, after their key/warehouse exchange, Seo-yeon promised to return his car after she hid the cash. There’s this great moment when Tae-woo goes to pick up the car, climbs in, and then hesitates, looking quizzically at the glove compartment. Sure enough, when he opens it, she’s left him a chunk of cash. I love that she did this, and his little smirk is the best.

Though Tae-woo says that “no good will come of being seen together,” he and Seo-yeon walk and talk at a distance. Tae-woo gives her the name of a money launderer he trusts, and he also warns her that her husband won’t give up as easily as she thinks. Seo-yeon’s naïveté here is surprising; she knows how horrible he is. Does she really think he will let her go that easily? 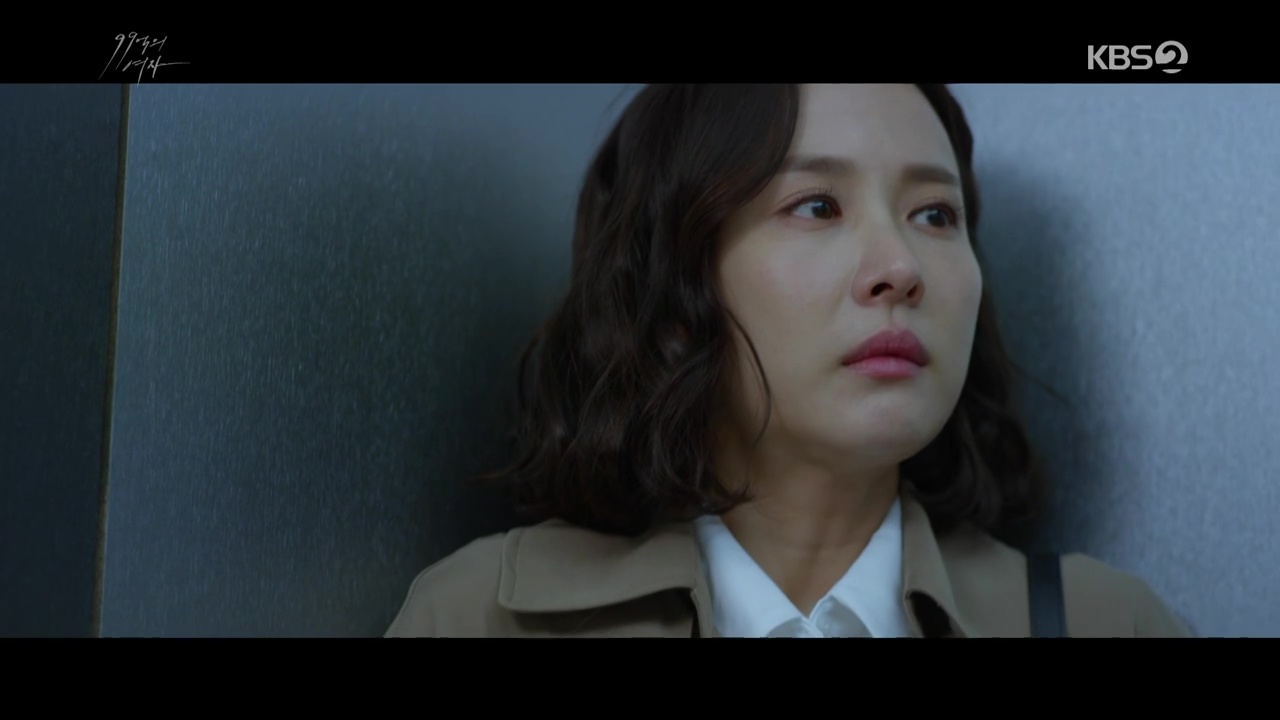 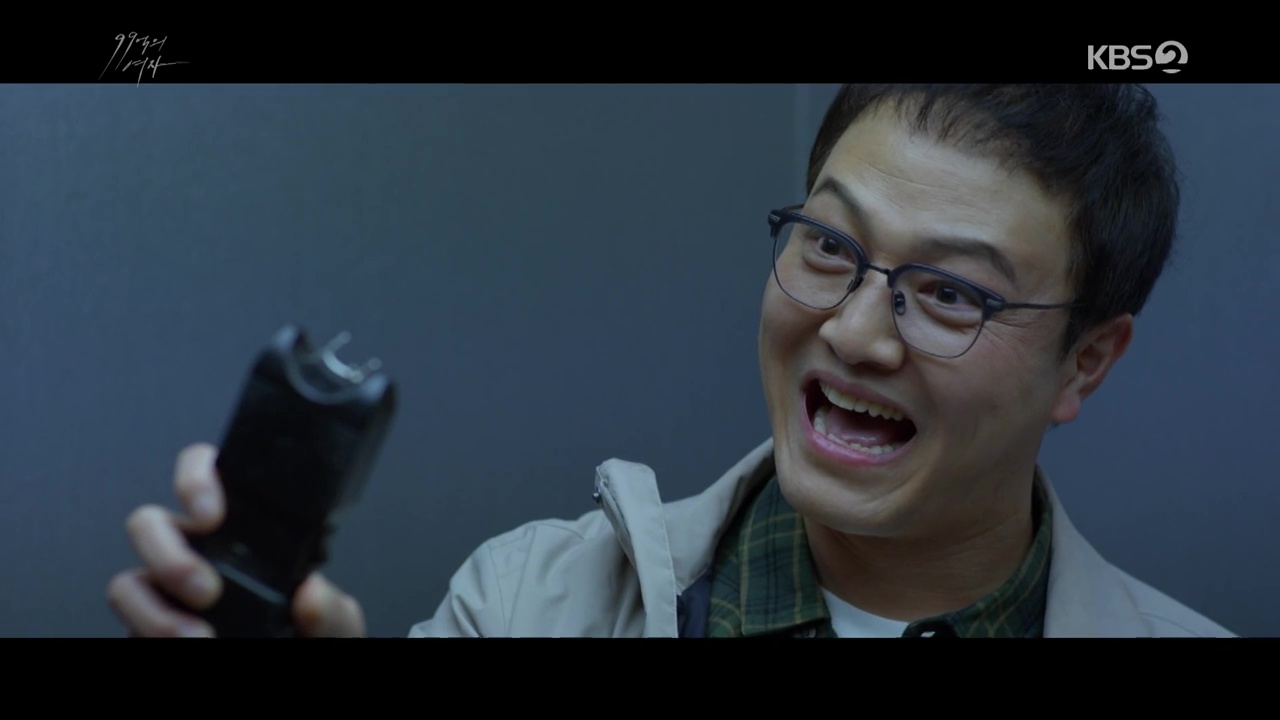 Speak of the devil, the world’s most terrifying husband methodically hacks her phone’s unlock pattern — just in time to stealthily pick up a desperate call from Jae-hoon. Being a complete hot-headed imbecile, he starts talking right away, and in the space of one conversation, not only makes it clear they are having an affair, but talks about “their money” too. This is the worst development ever! Now he’ll never stop!

After Jae-hoon is caught and confronted by horrible husband In-pyo about his affair with Seo-yeon, he’s a total dirtbag. He not only blames Seo-yeon, saying she seduced him first, but then winds up teaming up with In-pyo to steal back the 9.9 billion won. Oh great, a psychopath and a soulless playboy joining forces. And worse than that, Tae-woo is their first lead. 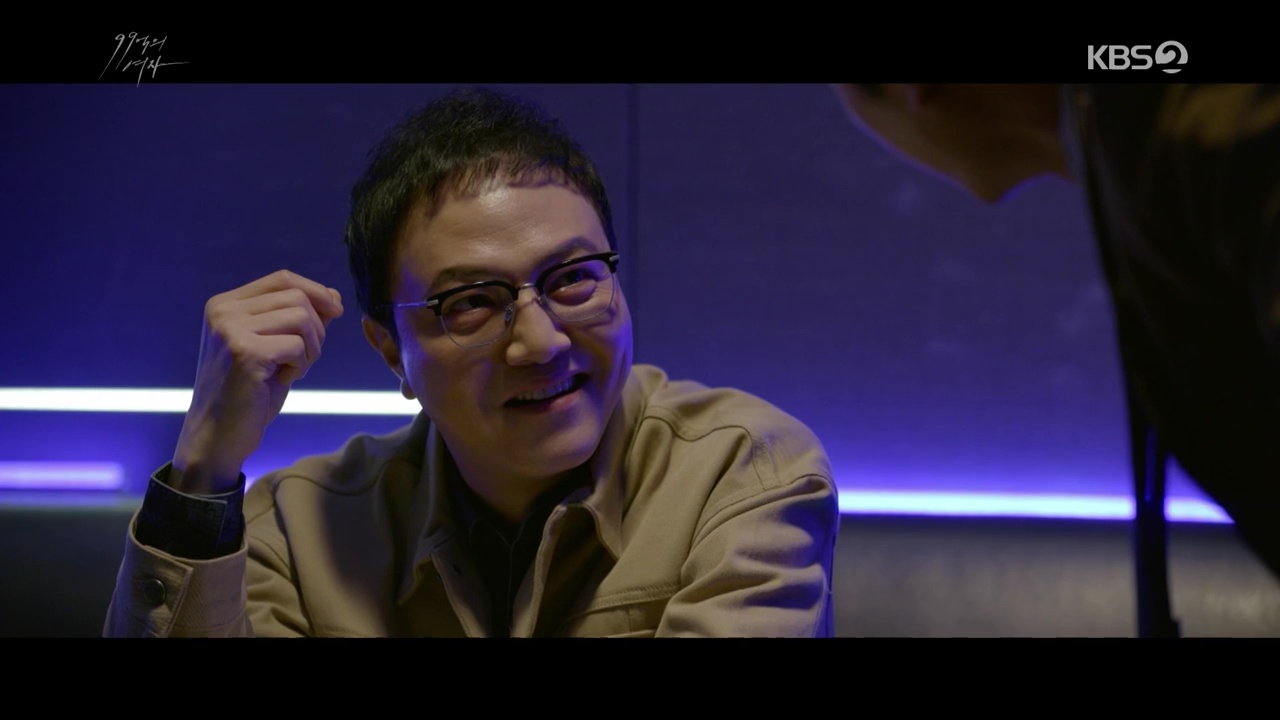 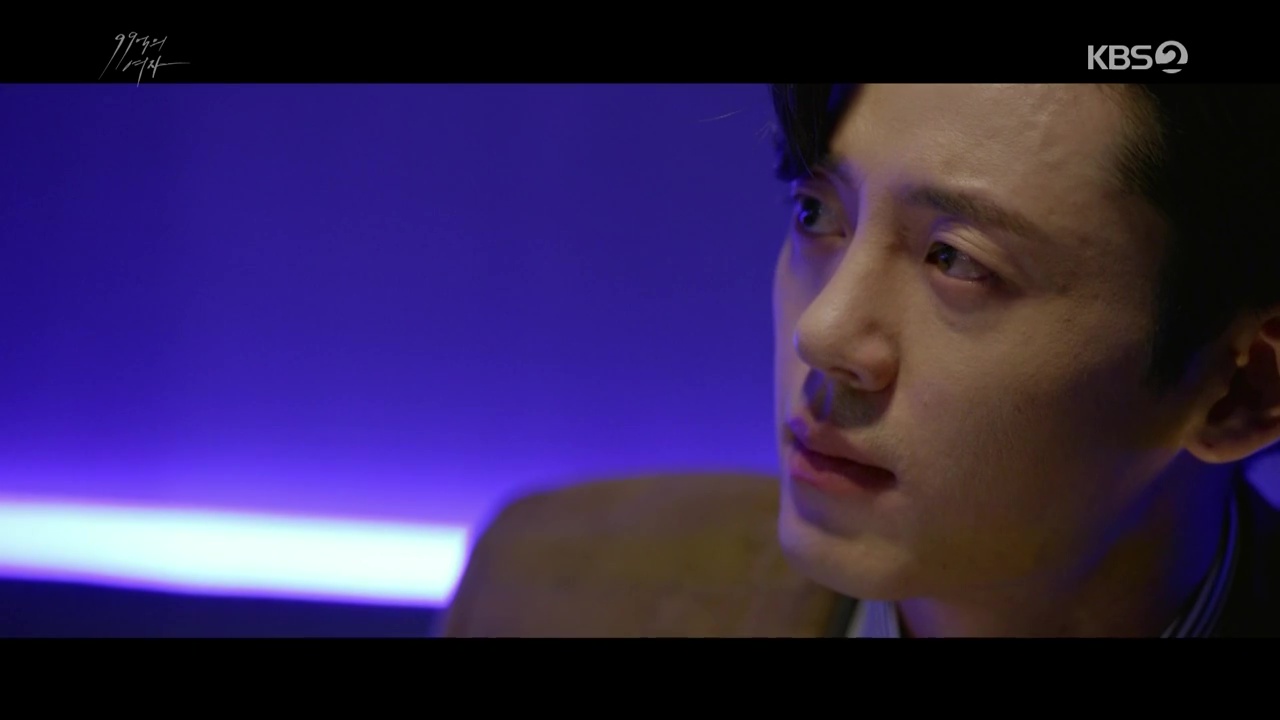 9.9 Billion Won Woman moves so fast! If you think Seo-yeon is safe for a second and find yourself relaxing for a breath, don’t! Because the next second she’s re-captured and tortured by her husband (desperate for the money), and then saved by Jae-hoon (desperate for the money). In fact, they’re both so desperate that there’s really no such thing as sides or loyalty, and both will play whoever they need to get closer to the cash.

But even with all the people after her and her money, Seo-yeon is also forming some epic alliances, first with the bar owner/thug/money launderer that’s friends with Tae-woo, and then, of course, with Tae-woo himself. 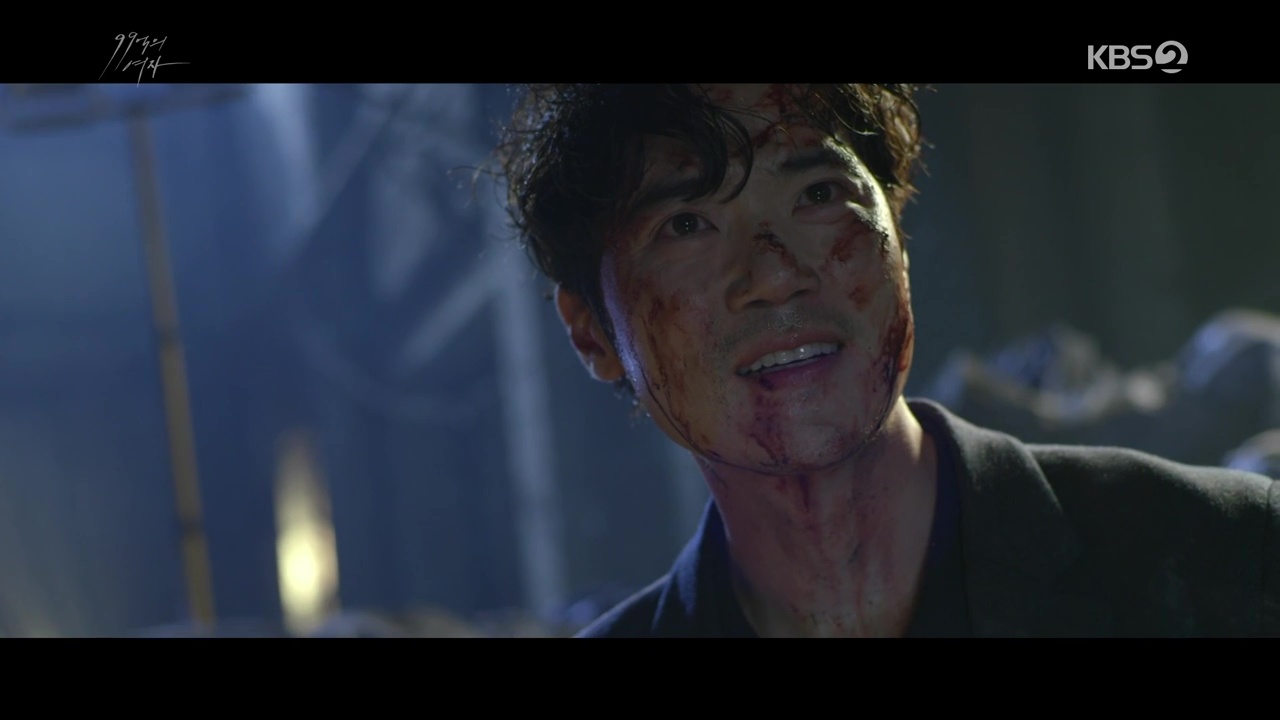 Tae-woo is mostly consumed with trying to find the locker for which his brother gave him the key — I thought it might hold the money missing from the 10 billion, but actually it’s photos and a USB, ostensibly filled with incriminating information about embezzlement within the group.

Before Tae-woo has much of a chance to utilize the information, he’s captured by the warring thugs. They care less about the information and more about finding out who was behind the theft (boy, they’ll be shocked when they learn it was an abused housewife).

But, interestingly, rather than give up Seo-yeon’s identity, Tae-woo is willingly crushed by a wrecking crane in a car at the top of a junkyard pile. Basically, he’s the most awesome, badass hero ever. And I not only love his character, but Kim Kang-woo’s performance leaves my mouth hanging open scene after scene. 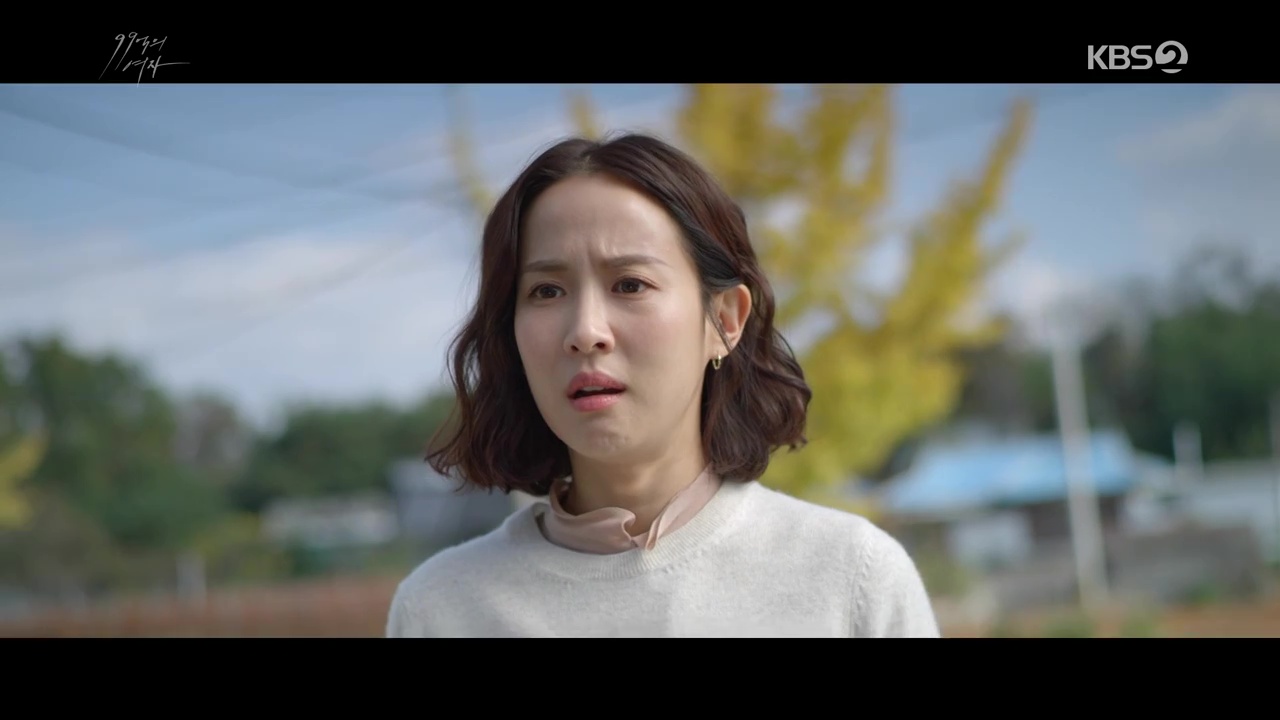 One of the strongest points of this drama is its fast-paced reversals. It’s almost like a game of chutes and ladders. One second Seo-yeon is safely hidden with the money, the next she’s being tortured for it. One second she’s giving up the money as ransom for Tae-woo, the next she’s scot-free with Tae-woo in the back seat. One second Tae-woo is a bloodied and battered, the next he’s calling the shots on the very thugs that captured him. And one second our hero and heroine are getting just an inch closer (gah!), but In-pyo is observing their exchange from a secret camera he installed.

It’s crazy, and it’s only about to get more so. As we get to know more about our characters, we learn their stories are intricately woven together. Even our supporting characters have secrets that connect them to the main players, and it looks like there’s a wild card or two at the ready. I’m holding onto my hat! 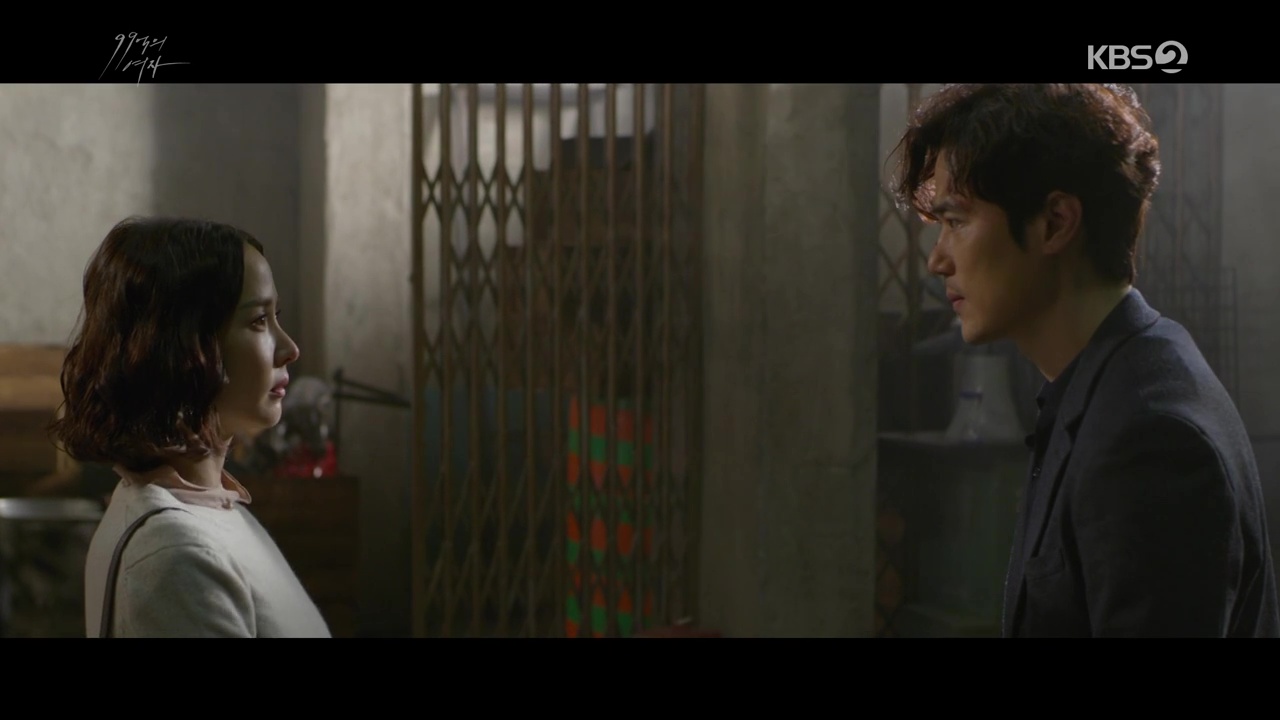 I LOVE Tae Woo. He is just such.a.good. person.
He helps Soo Yeon, without asking anything in return, risks his life for her safety and, what is more important, he does it for the sole reason that she needs it. Tae Woo did the same thing for bartender and his gangster friend. For once in dramaland, it's nice that the main lead isn't only a good person to the female lead. He just generally is.
Kim Kang Woo does a great job here. He is obviously having a lot of fun. This shows strength is must be how layered the characters are. Tea Woo jumps in a fight with the dozens of gangsters, survives a wrecking car, deliberately causes a car accident and then gets embarrassed when Soo Yeon thanks him for caring. Cute.

Also, I love Soo Yeon. She is strong, caring, and anything but naive. Her preparedness to spend that much money on saving Tae Woo was a great character moment. I love that she isn't greedy and knows when to stop. It was sorta hilarious how Tae Woo himself thought he wasn't worth of that much money.

@nerdy everything you said!!!

This is turning into a very taut, Hitchcock-style thriller. It keeps taking detours that surprise me. Pretty good stuff.

@kellie Well said!!! Maybe that's why I love it so much (longtime Hitchcock fan here)

I am waiting for it to end to watch this. If it's tragic I don't want to watch it since I really like Tae-woo and Seo-yeon

@maryalvin Oh, there will be tears over here if my two leads don't walk off into the sunset together by the end of this thing ;)

Honestly a superb show! There was a little too much violence for my liking, but this is making for some seriously fine television!

Love this show a lot and I really love Jo Yeo-Jung's acting. She inclines to pick complicate characters for most of her dramas and she's really good at it. She was crazy excellent in Ms. Perfect.

I heard she will be attending the 77th Golden Globe Awards representing Parasite on January 5th. Not sure how she can handle doing the 9.9Billion drama and manage to go oversea for an award show.

It's great that she's getting recognized for her acting these days. It's like some gear just clicked into place after being in the business for so long because she's been doing so well project after project as of late. Waiting to see what other interesting roles await her next.

In Pyo is really some next level crazy. He is a psychopath in every sense of th word, what a terrifying human. Seo Yeon is becoming one of my favorite characters, she is so soft spoken, but you can see her slowly start to get some steel. As for Jae Hoon, my God, he is a disgusting coward, he reminds me of Joffrey. Just no.

@kafiyah-bello I love her soft spokenness as well. It's amazing the contrast it's able to draw out when she's in conversation with others. So well done!

"... and a USB, ostensibly filled with incriminating information about embezzlement within the group"

Was this confirmed? I'm thinking the USB contains some info about the big baddie who caused tae woo's dismissal. This is the same baddie "who raised hell 3 yrs ago and is now about to make a comeback", probably in the next episode, no?

i've love kim kang woo's acting since Breathing. he is just awesome at drawing out the charactors strengths/flaws.

I FREAKING HATE THE HUSBAND. DO YOU THINK YOU ARE THAT SMART YOU EGG?

I think this show should be named ‘Wonder Woman’, I personally feel that it is ridiculous that a woman can come out of every situation unscathed!
Moreover, she is not of good character!Could have save Tae Woo’s brother.