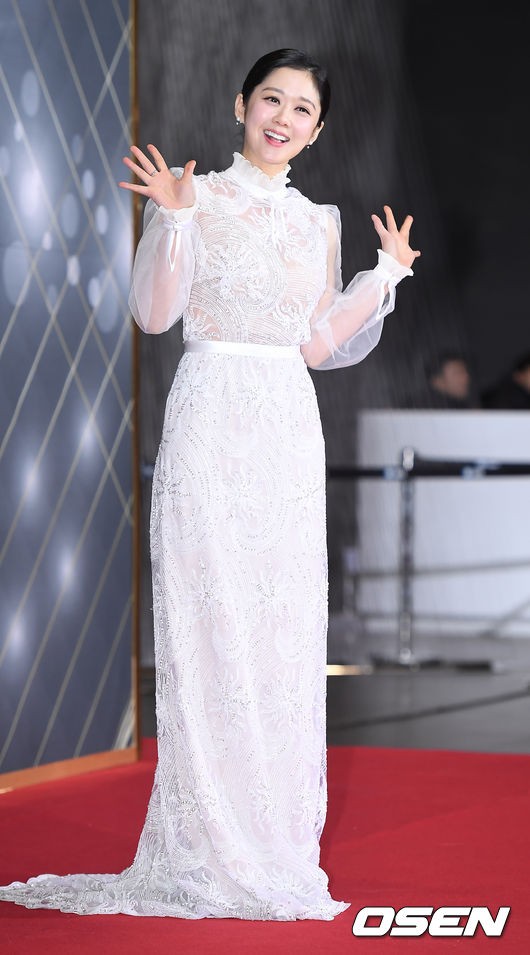 A new tvN drama is on the horizon called Oh My Baby and an offer has been made to actor Jang Nara (VIP) to play the lead.

The drama is a rom-com centered around a single woman in her late 30’s who doesn’t want to get married, but very much wants to have a baby on her own. It still takes two to tango, so to speak, and the female lead meets three men who could potentially be the right guy to father her child. There was a point in her life when all she dreamed about was romance and marriage, but, though she searched, love never appeared. But when she decided that she didn’t want love or marriage, three different men suddenly appear in her life and she gets caught in a dilemma as they each express interest in her.

It seems really fast for Jang Nara to be considering another role because her current drama is still on air. However, VIP was actually pre-produced and all filming has already been completed. I’m not a fan of the title, Oh My Baby, but it would be nice to see Jang Nara in a cheerful show after all the melodrama and angst in VIP as well as in An Empress’s Dignity before that. She’s always great in any genre, but I do like seeing her in lighter fare because of her natural charm and sweetness.

tvN’s upcoming rom-com Oh My Baby is currently being planned to air in the summer of next year.

I think it would be really amazing if she chooses one guy as the donor for artificial insemination but later falls in love with another. The twist? The guy she falls in love with works through the emotional conflict and decides to love the the child unconditionally despite not being biologically related.

🤣You are right!! I have not watched Jane the Virgin but am familiar with the premise of the show. Love to see another rom com in Dramaland which can handle the subject matter of single motherhood well with sensitivity! The only comedy that comes to mind at the moment is Hoo Goo's Love which I adore.

This is basically what I'm thinking my life is heading to right now... Except I'd probably never get three guys fighting to go out with me....

Same here!!!! LOL. and also with the exception of the 3 guys., that part is just too k-drama (cliche) and too unrealistic...... but glad to see I am not the only one feeling like that .... was starting to think I was weird or sth (or that it only happened to me)....

She’s got great chemistry with all her previous male costars, so it’s probably gonna be hard to choose who to ship her with here. I wonder who will they cast for the three men.

This is really interesting! It seems a good fit for her ( she has good comedic timing that i was a little surprised that she’s also excellent in melo). I guess Jang Nara won’t stop working...just yet! I am not complaining. I Love this actress!

I'm beginning to wonder if the true secret to agelessness is no rest at all. ABSOLUTELY NONE WHATSOEVER.... If Jang Nara can look like this when she's working, seemingly nonstop, then restlessness must be the trick, right?? RIGHT????

HA! I didn't read the comments before commenting!!

Hahaha. That, money and being single. Being in a relationship gives you wrinkles...especially if you are not a good match...

I do hope so too. But unfortunately to some people they just can’t get out if it. I’ve been there, thinking that I could change the person eventually.

Ah, remember what MaWang said in Hwayugi? She’s a demon in human form, and any apparent aging is from plastic surgery to make her look like she’s human.

Jang Na-ra says that her youthful appearance is really just an inherited family trait- something that is common to her whole family. It was one of the questions posed to her in her interview for Dramabeans.

Her brother Jang Sung-won (at age 42 at the time) appeared earlier this year in THE CROWNED CLOWN as Monk Jung Saeng and there were comments on how good he looked.

Yes, but not just looking good but also, like his sister, looking much younger than his age. When I made my response I considered mentioning having seen her brother in a show, so thank you for bringing him up.

They are not even similar but this reminded me strongly of 3 Dads and 1 Mom.

Jang Na Ra sure is one busy woman and in demand,good for her!!!
Curious who the 3 men will be and if they go by the old,same age or young as plot wise as they usually do it...We all know she will end up with one and maybe marry him and have a baby by the end,dramaland style...

This is worthy at least one Yippeeeee. Jang Na-ra does well in anything but I agree that she shines best in a rom-com. She became one of my favorite actresses after I first saw her in FATED TO LOVE YOU.

Is it too soon to have Shin Sung Rok costar? Or Woo Do Hwan if we go the noona route? (tbh I just want those two in everything, and just wanna see Jang Nara paired with all my faves because she makes every pairing better)

No. It is not too soon. It is never too soon for SSR to return. He needs to return asap for me to survive dramaland. Hahaha.

Woo Do Hwan for the noona route please. Although he's pretty busy lately...

And Jang Hyuk could be another potential pairing... let's make appear (again) in the same drama (and fighting for the attention) in less than a year... Jang Hyuk and Woo Do Hwan. Also what about maybe Lee Jong Suk?

10 Katakwasabi wants a Frodo plushie (the kakao emoji, NOT the hobbit!)

When I read JN is in talks for a new romcom, I automaticaly wanted SSR as the main lead and actually get the lady. Hwangu x pyeha! But when I read the description, there will be 3 guys around and the plot reminds me of 3 dads 1 mum. Now I'm not sure if I want a reunion, I don't want to make a ship that will not sail again. Hahahaha 🤣

Always nice to have Jang Nara in demand. One woman catching the interest of several men seems to be the latest trend -- not that I'm complaining.

Beanies - who would be on your dream team of three interested in JN’s character?

Wow, what a cast that would be. The shipping wars!

Nope, no wars. Shin Sung Rok would win, and everyone would be on board. Royal Hotness deserves this do-over.

Exactly egads. No wars. Royal Hotness will win this time. He deserves happiness and sunshine in dramaland~

I'd put Choi Jin Hyuk over Shin Sung Rok, only because he's been in 2 dramas in Jang Nara and never gotten to kiss her...

Imagine SSR and CJH both in the cast...

If I were CJH, I'd decline only because he's been friend-zoned by JNR both in real life and in dramas...

Now THAT would be a total headache of epic proportions. An amazing wonderfully good looking and charming headache, but a headache all the same 🤣

SSR would be cold and icy.
Jung Kyung Ho would be warm and flirty.
Jang Hyuk would be bedroom eyes and growly.

And Bang-won, oops Jang Hyuk, would have this odd fetish for antique folding fans...

But usually cold and icy will not get the lady, YY. I want Royal Hotness to win~ huhu

To me it seems like cold and icy (that is doubly Tsundere) usually gets the girl.

Jang Hyuk would definitely win. I think he's the most charismatic actor in K-dramas...

Will you make a cameo appearance in this one too?

I'll be sure to let you know. I'm open to all challenges.

And is anyone watching VIP?

I watched episode 1. Jang Nara was so pretty. But. Is this show about her cheating husband? Or is her husband covering up for the boss, and he's actually a good guy? Because if he's not a cheating spouse, then I feel cheated. This show is supposedly about a cheating spouse. The text she got at the end of episide 1 was chilling, YOUR HUSBAND IS HAVING AN AFFAIR WITH SOMEONE FROM YOUR TEAM, and the panning to all three women in the office, each staring at their phones.

I've been watching and so far, all signs indicate that he is cheating. But who knows what the ending will be?

Oh, ok. Thanks. I think I'll continue watching then.

Shin Sung Rok (I know, v. original), Woo Do Hwan (he deserves to be a sweetheart in something fluffy! #lethimbesoft), and Song Jae Rim!

Wait no never mind please don’t let it be these three. The stress of endless ship jumping/boarding would be too much for me

I stopped watching vagabond because i got very angry the way they made himman extra. *sulks*

Sulks with you YY. 🙁

Thats welcoming. I will b anticipating this new show - Oh My Baby. Tq Jang Nara.

Oh great, as if we needed more evidence that Kdramas are targeted at the cat lady demographic - you too could have 3 attractive men interested in you well into your late 30s*!

Maybe JN will own a cat in the drama. Cats are awesome. Better if her own cat appears as her drama pet. Ahahaha 🐈🐱

I'm wary about this one, because Jang Nara has the tendency to spark with any and every one that there's a danger that we get some really fervent shipping happening (which is almost always bad).

Aside from that, I also don't see anything special about the plot. I don't think having too many male leads is good, especially if the script writer can't handle it (this is the same writer who wrote Mirror of the Witch). Besides, Jang Nara needs to make a final push for an acting grand prize, and this doesn't sound like an award-winning project. However, I would love for her to star in a (better) tvN production one day.

Update: the casting choices of the male leads are very...interesting.

Hope this means the project will have something different to offer.