[2019 Year in Review] Chicken soup for the K-drama soul 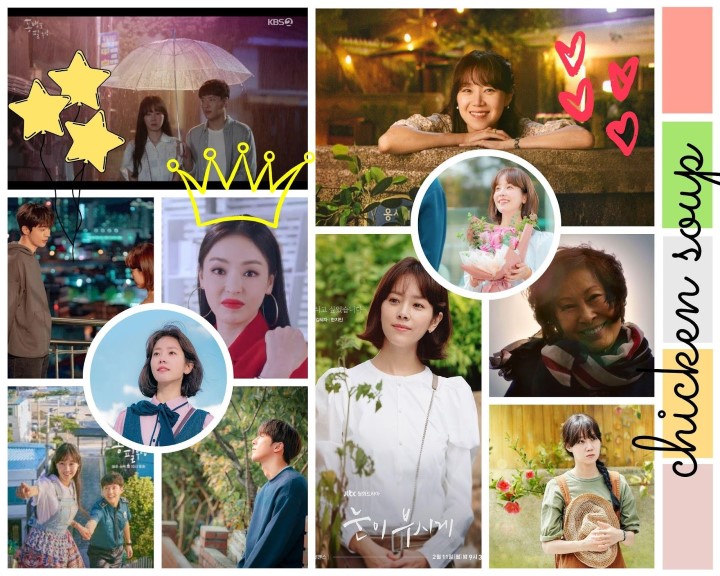 As an entire decade wraps up, it seems like many of dramas over the years weren’t shows that were super popular, which meant I couldn’t really join any of the hype. *cue I’m so lonely in the background*

2019 however, was the year I delved into K-dramas that were popular, yet quieter, more introspective, and just plain old comforting. So, using a postcard tribute (much like last year), I present to you my very own Chicken Soup for the Soul, one that’ll make your weariness melt away as the comforting warmth of these dramas soothes you. 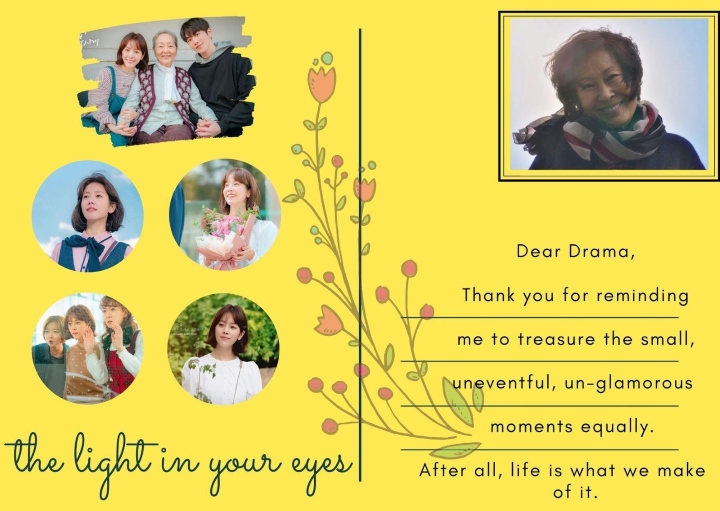 The Light in your Eyes left me bawling, with both happy and sad tears pouring down my face. The drama threw you a curveball so unavoidable and so unexpected that you were left stumped, in awe of the new realizations that came crashing down on you. This was the drama that made me crumble with the feels, and it’s unlikely you’ll be the exception. If you’re in doubt over starting this, trust me it just gets better and better. Scenes that don’t make sense will eventually piece together. Plus, you’d be privy to some of the best acting of the year, with emotional performances that will stay with you for years to come.

By the time the ending credits rolled on by, I wanted to hug every person I met, call my family and make a list of everything I felt blessed for. 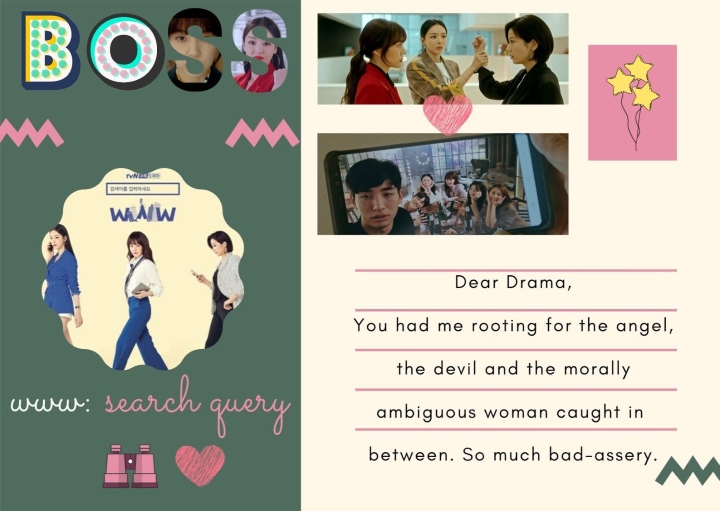 Search Query: WWW was one hell of a ride. A ride that kept me consistently strapped in, clutching the seatbelt desperately as the drama steered full speed ahead, without a minute’s pause. I loved every single second of it. From the mature, realistic way a couple at odds was portrayed, to how unceasingly cutthroat the competition in the corporate world can be. It was multi-faceted, multidimensional…call it anything you want, at the end of the day it was brilliance to me. Taking on an entirely new spin, the drama chose to focus on search engines, a concept that seemed boring on paper yet was riveting in execution.

From the way tropes were turned on its head (aww to Mo-gun freshening up after sleep–and being caught!), to the squishy fluff in our side romances, the drama was incredibly engrossing. If that still hasn’t gotten you queuing up the drama, then watch it for the car smashing that will peel back all your stress, the hilarious prime makjang and the three boss women at the center of it all who had me punching the air in sheer, unbridled excitement. 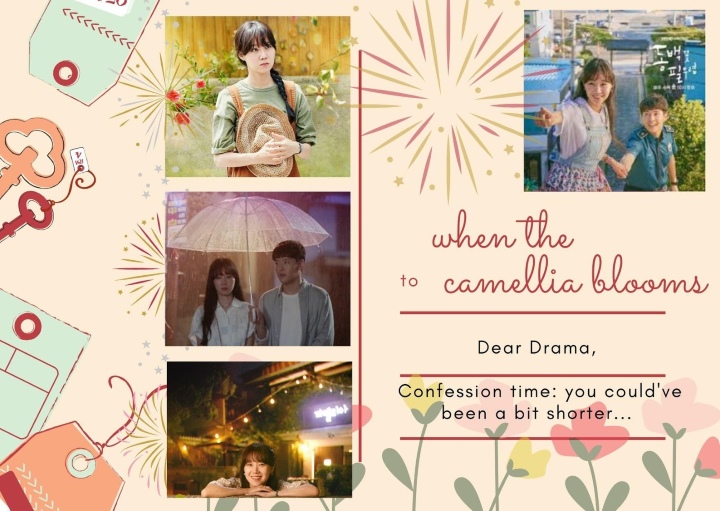 When the Camellia Blooms hit me with its quiet countryside life that managed to bustle with energy, gossip, and a murder mystery. There were moments where it seemed like the drama possessed unconstrained energy, like a wormhole that sucked you in and made you care about the meaning of a make-shift family, growing from countless mistakes and witnessing a flourishing romance (the best part). I admit, it wasn’t a smooth watch. There were times when I was aggravated with what our main heroine was doing, but at the same time, I cared too much to let go. It was much about seeing all of our characters get as much of a happy ending as possible. They deserved all the rainbows out there.

Verdict: A cup of comfort with a dash of makjang. 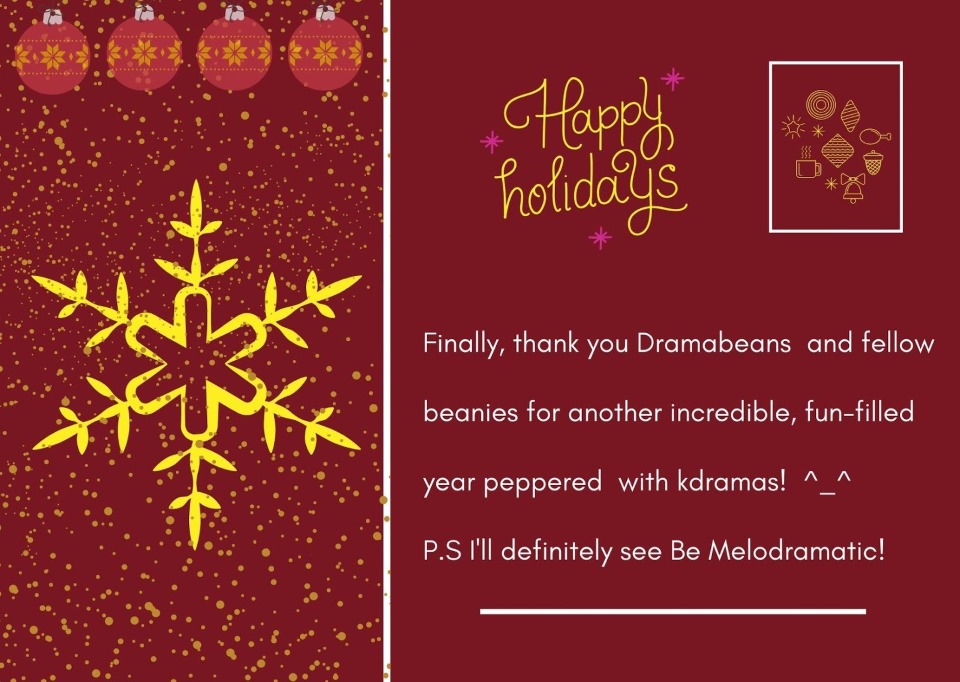 Wow this was so visually pleasing and nice to read! So much creativity! <3 While I probably could have taken 4 more episodes of Kang Ha-neul and Gong Hyo Jin, I completely agree with what you said about the other shows and Dramabeans/beanies! And I am about to start ep1 of Be Melodramatic right now myself!

I think the extension tested my patience a bit too much 😂 but Be Melodramatic deserves all the praise! I've just started it too.

How creative. Thanks for sharing. I'm determined to watch WWW and Melo this year. Determined.

They're both exceptional in terms of writing. Deserves all the ❤️❤️🎉🎉

Great piece! I also LOVE your postcards! I hope that we have some dramas this year that are just as good, if not better. I started Light in Your Eyes and I will finish it! *chants mantra*

You should! It's a carthaic experience- one that I won't be able to forget for a little while.

Lovely writing, thanks so much for sharing it!!
The light in your eyes and WWW were my favorites shows of last year along with Be Melodramatic.
I've read so many good things about Camellia that I have no other option than to watch it, even so I don't really like 20 ep. dramas. But so many beanies can't be wrong!!!
And if you've enjoyed Dazzling and WWW you should definetely watch Be Melo. You'll be in love with all the amazing, crazy, caring, loving characters you'll find there.

What a lovely piece! Yes do watch Be Melo - it's like the comforting drama friend you need at the end of a hard day, or someone to cosy up with on a rainy day.

What a cute review. I love the postcards!
Semi-OT, but I just saw your 2018 review and I agree so much with what you wrote about Misty. It was gearing up to be one of my favorite dramas and then the ending happened.