OK, I had a Vagabond discussion with @katakwasabi about the bullets in the car, and it made me go back and screenshot it. For science. As katakwasabi mentioned, the bullets went through the metal body, but were apparently were stopped by the inner cheap super-Hyundai-plastic on the doors, so as to keep the passengers from harm.

Apparently the special effects guys drilled (large!) holes in the body, but only where it didn’t actually hurt anything — none on the gas tank area and none in the important engine parts. Also, the ‘randomness’ of the machine gun fire is not good, guys. You can do better than that. 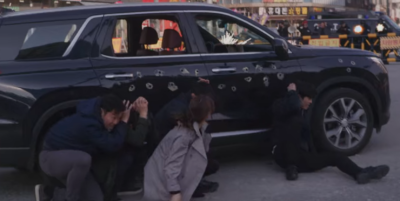 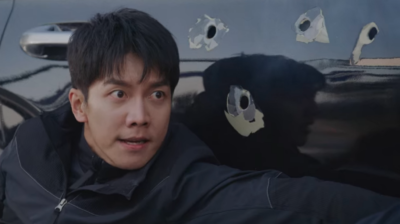 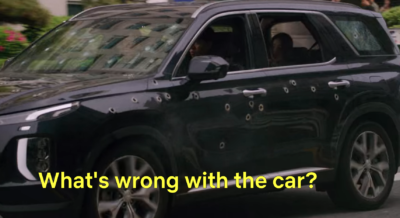 I wonder how close this is to reality? How far can an actual bullet penetrate?

I think unless a bullet proof car, a bullet can easily penetrate any car.

😱 and I had the perfect plan thought out if I was ever unfortunate enough to be somewhere with a shooter…!
I need another escape plan 😢

Cars, fridges and doors offers no cover from bullets, based on some Mythbusters watching 😉

You should do an analysis on the shipping container too. That one requires a suspension of disbelief of like…this is a cartoon proportions–not that the car is any less, but yeah.

They were shooting from inside a container with window slits….and somehow on one inside got shot or hit by a ricochet, and they manage to land a bullet or two on the baddies outside. They really have luck on their side.

That whole shooting episode inside and out of the shipping container was soooooo just unrealistic/illogical and I don’t know what else.
the bullet holes through the car and NO ONE gets hurt – then they all stand in front of the police and no one shoots until the Swat guy who obviously wasn’t one starts.

and I didn’t see any flying tanks… 🙁

Hahahahaha!! Thank you for the screencaps. The interior of the car should be painted red with blood, but it was pristine. I don’t want KTW et al to die, though they really should have in this n-th gun fight (I lost count how many gun fights have happened).

Anyways.. this was a great Hyundai ad. The car is very durable. 😆