THE MANDALORIAN: As a fan of FIREFLY and ROGUE ONE I am completely obsessed this show.
Season 1: Episode 1 “Chapter 1”
Written by: Jon Favreau
Directed by: Dave Filoni
Five years after the defeat of the Galactic Empire, a Mandalorian bounty hunter accepts an under-the-table commission from an enigmatic Client who appears to have Imperial connections, directing him to track down and capture an unnamed fifty-year-old target. While the Client is indifferent to the target’s well-being, his colleague Dr. Pershing insists the target be brought back alive. The Mandalorian is given a down payment of a single bar of Beskar steel, sacred to his people. He brings it to a Mandalorian Covert enclave, and an armorer there uses it to craft a pauldron for him. Arriving at the planet that was the last reported location of his target, the Mandalorian is aided by a vapor farmer named Kuiil. Tired of the chaos that bounty hunters bring to the area in trying to claim the bounty, Kuiil leads him to the target’s location in a remote structure. Entering the heavily defended encampment, the Mandalorian reluctantly teams up with bounty hunter droid IG-11 to clear the camp and find the quarry: a Child who appears to be of Yoda’s species. When IG-11 attempts to terminate the infant per its bounty orders, the Mandalorian shoots and destroys the droid, taking the Child alive. 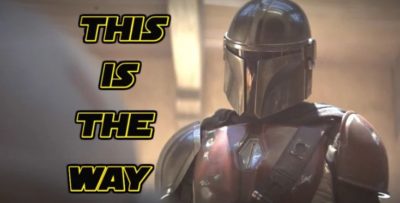 This is the only drama I’m watching currently.

It’s pure fun with a little bit of heart. All great episodes, with ep 3 as my most favorite so far.

Baby Yoda for the win.

Same here. Done with MY COUNTRY and UNTAMED so this is it for me.