THE MANDALORIAN: Love the two female characters in this episode Dune and Omera. The helmet, the chemistry <3.
Chapter 4: "Sanctuary"
Written by: Jon Favreau
Directed by: Bryce Dallas Howard -following his father Ron Howard's footsteps.
Arriving on a sparsely populated planet, the Mandalorian encounters former Rebel Shock Trooper-turned-mercenary Cara Dune, in hiding after taking "early retirement". They fight and she asks him to leave the planet. While preparing his ship, two desperate village fishermen approach to hire him to drive off some Klatooinian raiders. He accepts in exchange for lodging, using their credits to enlist Dune's help. At the village, Omera, a widowed mother, houses them. The Mandalorian confides in her that no one has seen him without his helmet since childhood, when the Tribe took him in as an orphan. Despite discovering that the raiders have an Imperial AT-ST, the villagers refuse to leave, so the Mandalorian and Dune train them to defend themselves. At night, they provoke the raiders, leading the AT-ST to a trap set at the village, but it stops short while the raiders attack. Dune lures the AT-ST into the trap, where the Mandalorian blows it up; the remaining raiders flee. With peace returned, the Child plays happily with the village children, and the Mandalorian plans to leave him there. Unfortunately, a Guild bounty hunter has tracked the Child, but is killed by Dune. Realizing the village won't be safe, the Mandalorian departs with the Child. 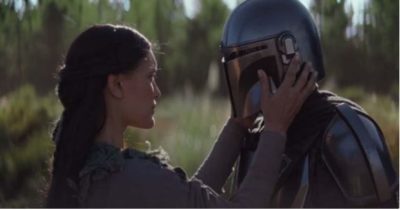 Yea I didn’t want to edit it and lose the picture lol.