THE MANDALORIAN: Ming-Na Wen (Yay).
The Agents of S.H.I.E.L.D. and Mulan actress will appear as the assassin Fennec Shand, who crosses paths with Pedro Pascal’s masked bounty hunter midway through the first season of The Mandalorian.
A fox can be a sly predator—or it can be the vulnerable, hunted prey. Ming-Na Wen’s new Star Wars character from The Mandalorian is someone who knows how quickly one can become the other.
The first appearance of her character is in this new teaser video, with her facing down the faceless lead character, a man without a name apart from the warrior tribe whose armor he wears. She delivers a somewhat ironic line: “Your name will be legendary.”
Is she the light side or the dark side? Good guy or bad? Or does her allegiance lie somewhere in the middle? “Thinking that she’s a mercenary, it can go either way,” Wen said. “I think it remains to be seen.” Wen compared her to Han Solo, a survivor who didn’t start out believing in any cause but his own. Then again, Fennec Shand made her name committing murder for the galaxy’s top crime syndicates, so she’s much closer to the sinister side than the wisecracking smuggler.
She is definitely someone who’s loyal to herself. 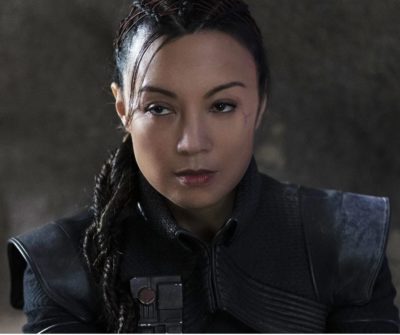 I love her. And Liu Yifei? When and sign me up!

I just watched chaper 5 and I’m glad that she is going to be in more episodes.

I’m still looking forward to the live action Mulan and hopefully Liu Yifei would stay out of politics till the movie is over. With 300 million budget she can’t afford to be so careless.