THE MANDALORIAN: Chapter 5: “The Gunslinger.”
Written by: Dave Filoni
Directed by: Dave Filoni
The Mandalorian defeats a pursuing bounty hunter in a dogfight, but with his ship damaged he lands at a nearby repair dock, run by Peli Motto in Mos Eisley on Tatooine. He seeks work in a cantina to pay for the repairs, meeting aspiring bounty hunter Toro Calican, who is tracking elite mercenary/assassin Fennec Shand. As Calican needs to complete the bounty to join the guild, The Mandalorian agrees to help when Calican offers to let him keep the money. They find Shand in the outer desert, but she destroys one of their speeder bikes during her capture, so The Mandalorian goes to get a dewback they passed for transportation. While Calican watches Shand, she tells him that The Mandalorian betrayed the guild, making the bounty on him and The Child worth more than hers. Shand offers to help Calican capture The Mandalorian if he sets her free, but he shoots her dead aiming to take their dual bounties. Calican rides the remaining speeder bike to the repair dock, taking Motto and The Child hostage. The Mandalorian arrives, uses a flare to disorient Calican, and kills him. He takes Calican’s money to pay Motto for the repairs, thanking her before leaving Tatooine. Out in the desert, a mysterious figure approaches Shand’s body.

Humm not my fave episode. Maybe because I’m not a STAR WARS nerd. There is quite a bit of nod and references to the previous ST movies that I wouldn’t have known if I didn’t watch the recaps.
The episodes are too short (30 mins) and Ming-Na Wen was unutilized. She better return in future episode.
I think I like it more when Jon Favereau is in charged of the script. 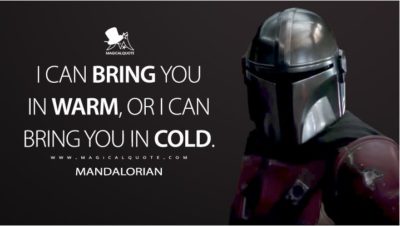 first tell me.. in short.. you liked it or not?