While I was jumping from show to show, 365 got a lot more interesting and started to make sense again.

Okay, so I learned very quickly that I was very wrong. Not on the woman part but on the suspect part. This show has officially kicked my “villain detecting” butt. I can’t even be mad because…

…it’s so exciting. The last “whodunnit” show that completely blindsided me like this was Watcher. I was randomly calling out names as Eraser removed the mask but I didn’t even think of that character. I even mentioned Han Seon Mi as a suspect!😳 I can’t wait to hear Eraser’s story now. Is she related to Cho Won? Why hate Dong Baek so much? Why kill his mom? Why kill at all?

he he… atleast i was right from the beginning that powers can’t be random if the universe doesn’t allow a lot of people to have powers..

There has to be a genetic connection.. but i was hoping for a twin brother..

but i am so happy to be on track

Hats off to you. I was grasping at straws

I knew it was a woman but I didn’t expect her.

That whole debate was just so I can come back to say ‘Called it!’ if (when?) I’m proved right.

Spoilers for Memorist Ahead

Okay, so I’ll admit – I really thought Deputy Chief Lee was the Eraser and I’ve been shaking my fist at him for most of the show. The show got me good. I half-didn’t believe it when D.C. Lee was revealed not to be the Eraser. I’m usually good at guessing these things so props to the show for proving me wrong.

But! They won’t get me twice. The Fire Police Chief (FPC from now on) is supposedly the Eraser. Sure he has a motive and maybe the means but he’s missing one important ingredient: youth. What’s age got to do with it, you say? Well, everything. Are you gonna tell me that grandpa killed all those people? (remember so far Eraser has done a lot of stunts: he’s jumped from a second-story window, jumped from the roof of a building and then fallen halfway, carried a pretty hefty looking firefighter…)

Also, there’s been no proof of his powers yet. The only proof of identity we’ve seen is that heavy coat and that mask (Prop’s to the actors btw – that’s gotta be uncomfortable).

Another thing: There’s just no conflict with Dong Baek. I see no reason why FPC would hate Dong Baek to the point of killing people he has touched and pointing him out as the reason for the murders.
All of this just says the Eraser is someone else not necessarily a woman though.

And so, the decisive factor: when Eraser and Dong Baek have their little chat on the rooftop, Eraser’s voice is disguised but it’s easy to tell that it’s a female voice. It’s so obvious I kinda want to think it’s another false lead but I don’t think the show is that slick. Also, Memorist doesn’t seem like the type to go the typical male villain route.

Now that’s said I have a suspect: the NIS lady that goes around lying about her identity. What is she really here for? Why is she lying? There are only two episodes left and so much to wrap up so I don’t think they can introduce a completely new character and give them enough credibility to be the villain. I smell an “in hopes of a season two” finish though. I’d be quite disappointed if they go the Vagabond route but I honestly don’t see the story ending anytime soon.

Anyway, that’s it for now. I felt like I had to at least debate with myself here rather than with the air in the room 😅

I found it. The scene from Circle that made me stick to the show (and Yeo Jin Goo 😊)

My Circle review for Korean class 😅:
I\’m only allowed 200 words here so…⬇

Hello and welcome to Min Jin (the name my teacher gave me) Reviews! (applause, applause). Today I would like to introduce tvN drama Circle(2017).

‘Circle’ is an innovative drama exploring the concepts of memory as a key to self and identity. It tells the story of two brothers, twins Woo Jin and Bum Gyun who are desperate to find the truth. The story is told in two parts. One is set in 2017 while the other part is set in 2037 when Seoul has been split into two: regular earth and smart earth. Regular earth is ridden with pollution but smart earth is advertised as a clean crime-free city. In 2037 there is also detective Joon Hyuk who is searching for the truth as well.

Featuring the likes of Yeo Jin Goo, Kim Kang Woo, Gong Seung Yeon, and Ahn Woo Yeon, Circle has awesome performances. I didn’t know who Yeo Jin Goo was when I first watched this drama but I became a fan after I saw his performance in this. My favorite scene in the show came from the first episode. In the scene, Yeo Jin Goo (who plays Woo Jin in 2017) is begging Ahn Woo Yeon (who plays Bum Gyun 2017) to stay. It was just one scene but I could feel all the desperation that Yeo Jin Goo’s character was feeling. That got me really invested in the character and in Yeo Jin Goo as an actor. (Tears still come to my eyes when I think about it.) Even when the plot lags, you can rely on the characters to keep things interesting.

Another strong point Circle has is its unique plot. It deals with aliens, the past, and the future and it also examines how our memories are the most important thing in determining who we are and what we do. My favorite part of this drama, though, is the relationships and chemistry between the characters. The story is mostly mystery and sci-fi so there is barely any romance. Instead, you can look forward to the bromance. A lot. The bromance between the two brothers and the way they care for each other is well-demonstrated in the drama. Also, the drama expresses warm human relationships with the other characters too. For this drama the less you know about it before you see it, the more you will enjoy it. That way you can enjoy the many surprises of the drama.

I will end my review here but I strongly recommend the drama “Circle: Two Separated Worlds”. I’m pretty confident you will enjoy watching it. To the extent that you will probably wish there were more than 12 episodes.

Impressed! You had to write it in Hangul!

At first, I thought our teacher would let us just write it in English but I read the instructions and she was like “write in Korean, have at least 12 sentences, use grammar patterns we learned this semester…”

That’s impressive! How long did it take you to write all that??

A hella lot of time. Writing always takes the longest for me because I’m thinking over and over. Also, I had to use a translator to make sure I was using words right. So I’d write, then say it to the translator, then adjust my writing… And I do this over and over so I usually have multiple drafts

👏👏👏👏 You must have learned a lot doing that!

I reviewed Circle, one of the lesser known (?) treasures of dramaland and I didn’t realize how much I missed these two😭 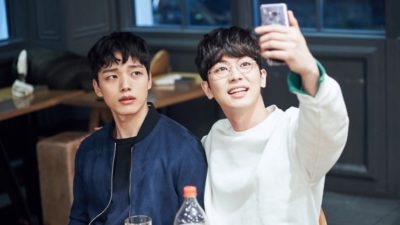 This show introduced me to Yeo Jin Goo and his acting 😍 (I know, I’m very late to the party) and for that I am forever grateful.

I never expected to love this show as much as I did and still do. I’m so glad I didn’t give up watching even though the first few episodes were confusing to me.

This was a very good show.

Our professor had us do a K-drama review for extra credit and *you know* I went all out. I can\’t remember the last time I worked so hard on a paper😅.

What kind of class has you watch kdramas for extra credit???

Why didn’t these classes exist when I was in undergrad? (The answer to this is probably that they did exist but I didn’t know they existed.)

lol, it’s my Korean class. Our professor is cool like that😎. Because of the whole Corona thing we can’t make a mini-kdrama as usual so she had us do a review instead.

That sounds like a really fun class! 많이 배웠어요?

@raonah Did you take a class too? Or self-study? Or do you just know Korean?

I studied on my own a little using TTMIK. I’m not very fluent but I know a little bit.

Was this your first semester of Korean? Are you going to keep taking lessons?

Same, I studied on my own with TTMIK (which is awesome), Youtube, and a hella lot of dramas for half a year, then they brought Korean classes back so I signed up. (Thank you, language requirement!) This semester was my second semester of Korean. I’m moving on to Intermediate next fall. It’s definitely going to be harder than the last two courses but it’s pretty fun so it should be alright 😅

@leetennant and I did some reviews on this show here on DBN. We loved that show. Just talking about it last night! The cosmos knew. I would love to read yours! Can you link it?

It is an awesome show. I’ll post it on my page. We had to write it in Korean and my writing skills are not the best 😅

23 completed dramas from this year; 40 dramas started. And that\’s not all I watched! I don\’t know whether to be proud or worried. One thing I know though: it was a fun year in dramaland 🙃

My new type: Hwang Yong Sik
(Sorry, Goo Chan Seong. There’s always a place for you in my heart 💖)

But then shout out to Man Weol’s heels in this scene. Because of them I burst out laughing in the middle of my crying fest. Who walks a bridge that long in heels? But then, it is Man Weol… 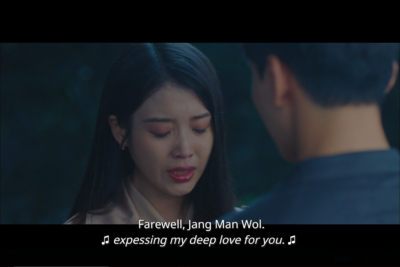 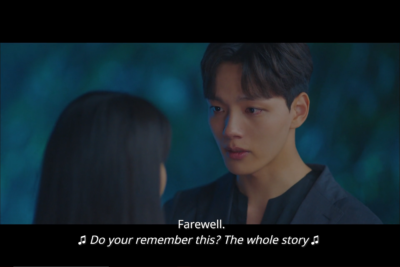 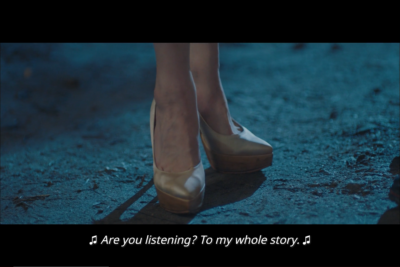 I cringe every time I see her in heels.

Nope, I don’t have a cold. I just finally put on my big girl pants and finished Hotel Del Luna 😭😩.. 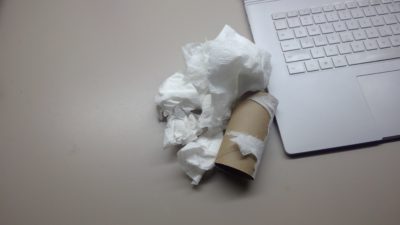 Me, at the end of each of The Smile Has Left Your Eyes🤧

I’m not even going to try myself with that one. I know my limits 🙅‍♀️ 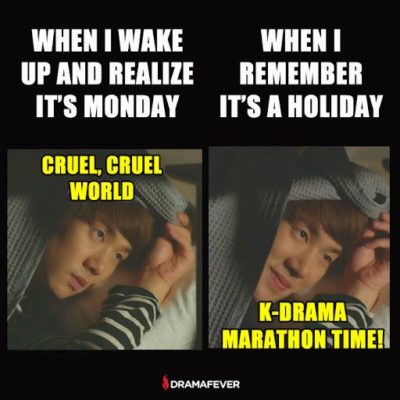 Denial level: refusing to watch the last 2 episodes of Del Luna because if I haven’t seen it then it’s not really over…
(right? right?! 😭) 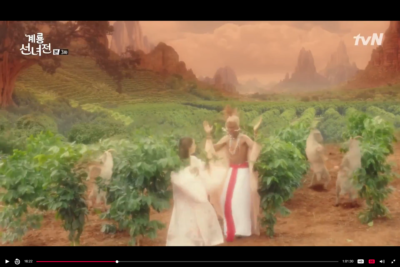 But hey, at least this psycho 👇 is coming back 😊 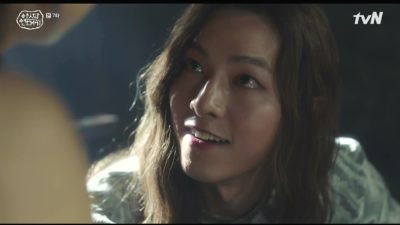 Am I the only who’s slowly starting to feel the sadness that comes with the end of any good show? There are still 4 episodes of Del Luna left but it feels like it’s already over 😭. 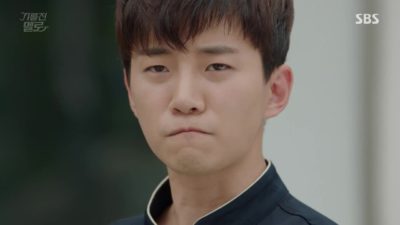 I totally feeling like Man Wol is leaving me and I’ll probably cry.

I’d forgotten how much I enjoyed this show. And I’m finding so many new things the second time around 😍💕 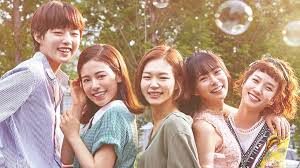 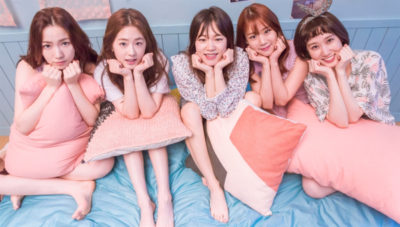