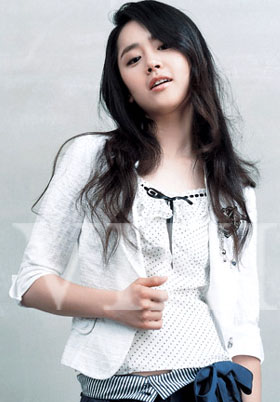 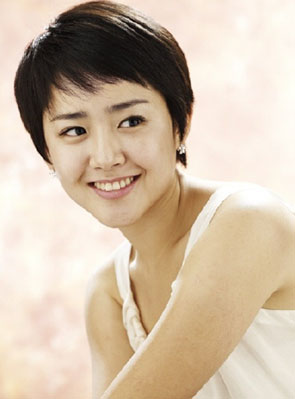 Looks like I spoke too soon (below, regarding Moon Geun Young).

With the new “tomboy look” trend in full swing, cable channel Mnet took a look at it in closer detail on its Trend Report (aired on the 30th) and found that while some have taken on the style with aplomb, others haven’t quite managed to own the look and ended up owned instead. Or should I say pwned. And since it’s such a drastic change from many stars’ previous images (all long hair and feminine flair), those who flop with their new looks are all the more noticeable for it. 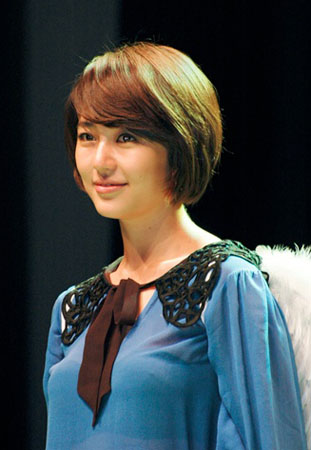 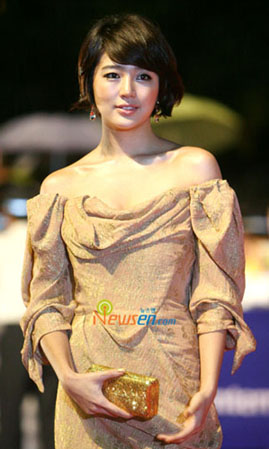 Of course, setting the bar is Yoon Eun Hye, whose boyish charm in Coffee Prince is now morphing very nicely into a sophisticated look. Mnet’s MC Choi Yeo Jin and designer Ha Sang Baek praised her, saying that to own the tomboy look, one needs a mature image, and she matches the masculinity with sexiness perfectly. 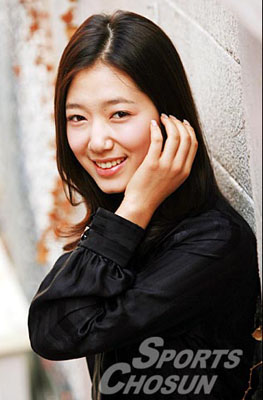 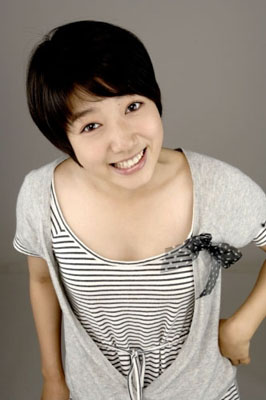 On the other hand, Park Shin Hye doesn’t quite rock the tomboy look, and because she’s so young, it looks like she’s copying the trend set by Yoon Eun Hye both in appearance and acting.

And while we’re speaking about age — why don’t producers let her act her age already? She’s A KID. She’s round-faced and youthful and just verging on womanly in that cute-because-it’s-awkward-and-still-green sort of way. She was born in 1990; she’s barely seventeen (and looks twelve). Please, I don’t need to see her trying to act like someone a decade older — or six years, in the case with her current drama, Radish Kimchee (Ggakdugi) — and I sure as hell don’t want to see a minor of her years just barely escape being raped on a family drama, thank you!

Which is all the more ironic since Moon Geun Young, who’s having a hard time shedding her cute youngster image (and whose last attempt at image transformation — sexy rocker chick that time — was equally unsuccessful), is three years older than Park Shin Hye.

I don't think it's easy for MGY to shed her image as the sweet lil girl in Autumn Tale, just purely for the reasont that she has been portrayed as one (well because of her age then) for such a long long time. I personally think her sexy rocker chic style in one of her CFs was attractive..and I appreciated the step she's taken to initiate this change. However yeah..it's hard, very hard in fact. All the best girl..

I still like MGY's hair style. The only person who doesn't look nice with the new look is Park Shin Hye.

i didn't know stars can be 'downgraded' by their fans....sounds like they are just another commodity...

Why did park Shin Hye cut her hair?
I think producers wont let them act their age, because their personalties don't match their age. Do you know what I mean?
Like, MKY her personality is more of a cutesy thing, so she acts younger....

As much as I love Yoon Eun-Hye and admire the talents Moon Guen Young and others, I don't think you'll find more than one in fifty male hetereosexuals that would prefer to see a pretty girl/woman with short hair. The style points these women score are mostly awarded by other women and gay hairdressers and, let's face it, most girls/women go through these drastic changes to impress or get a reaction from each other. You won't find too many guys telling a girl with long straight hair that she'd look better in and afro or a crew-cut. Guys go along with it because you have to go along in order to get along. Tell me that you really believe that the beautiful Yoon Eun-Hye improves her looks or allure by shearing her long locks and dressing like a boy. It was just a part in a series. I'm looking forward to seeing her back as her glamourous self and I'm certain that a good 98% of the male population agrees with me.

It's all YEH's fault for setting up this trend LOL

Ouch, that hurts. Boy, the Korean press is tough. So much for personality and talent, one little wrong move and it's like you've committed a sin. What happened to self-expression? Ease up, they're the ones who have to live with it... and hair will grow back.

There's nothing wrong with having short tomboyish hair. It just so happens that other female actress looks good with it and others don't. But now YEH's hair does not look tomboyish at all, it's just short and pretty.

Strange that so many people seem to equate short hair with masculinity. In the vast majority of the so-called new "tomboy" looks, the women are still uber feminine, in pretty dresses and make up and high heels. YEH in Coffee Prince -- now that was a tomboy look: baggy jeans, sneakers, shapeless t-shirts, unstyled hair, bare face.

And robbo4 -- the insuation that the only reason a woman would style her hair a certain way is to appeal to the opposite sex is vaguely insulting. And I won't even touch the afro comment. :\

Elise, i laugh out loud with u :) that comment cracked me up :)

it's funny how just 2 weeks ago i was so determined to cut my hair really short (my inspiration style would of course be YEH's) and i listed my reasons (summer, new outlook, big decisions).. BUT NONE of my friends (girl or boy, older and same age) AGREED with me (except for 2 of my young officemates who are just in it for the DARE haha).. and so i ended up letting my hair long as it is and deciding to buy a curling iron so i can still have a different style when i wish to :)

ANYWAY, the point of my story was, Yoon Eun Hye is a good influencer! i wouldn't have thought of cutting my hair so short if not for the classy way she looks with her current hairstyle (not the tomboyish cut in CP).

btw, thanks javabeans for all the news!

Wow I think YEH looks amazing in those pictures! She pulls off her haircut very well. The other two girls should stay with their longer hair. Or maybe just get a new stylist :)

how cruel.. people can be so fickle... over a haircut... pish.. they're still pretty anyway...

a) moon looks way better than park with the short hair
b) yoon eun hye ftw!
c) mgy just would never lose that cute little-sisterly(or brotherly:P:P i kid i kid) image... all her movies seem like a reenactment of my little bride.. she just naturally looks way too young!

park shin hye sure is rocking the look in you're beautiful. lots of people think she looks better with short hair than with long in it. including me :D

Why is short hair tomboyish or considered masculine??